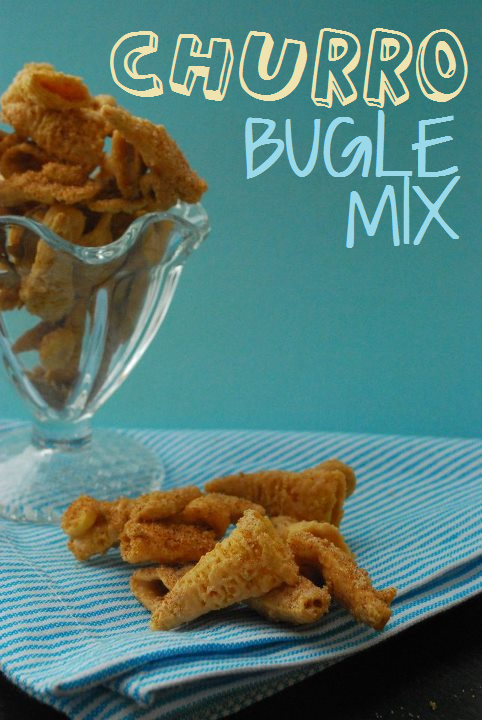 A few days ago, Jessie asked me if we wanted to go to his friend’s show at a local restaurant. I said sure, thinking we’d just stand around and drink and leave after an hour or so of loud music.

When we got there, after a particularly delicious Midori Sour at the bar, we found a table in the front row since we know the lead singer and all, and the band proceeded to play.

Anywho, they were encouraging people to dance in the space by the stage and only two lone, brave couples took them up on the offer, swaying fearlessly to Black Eyed Peas and Pat Benatar covers.

I was rooting them on since they were clearly parents able to swing a sitter for a Saturday night and wanted to live large and have fun. Plus, the moves weren’t half bad, except, spoiler alert: EVERY male (besides one I will mention in a moment) has the SAME dance move–the subtle sway and foot shift, complete with a stifled air-guitar plucking motion by their belt loops.

Anywho, as the night developed my eyes became transfixed on a fresh divorcee whom I dubbed “Blondie” for her choppy, blonde locks, teensy khaki shorts and sky-high shoes. And model body. Obviously.*
*in Rocklin, a suburb of Sacramento, plastic surgery and hot moms rule supreme. The skinnier the body, blingier the jeans, higher the heels and faker the boobs, the better.

Blondie had a little lost puppy, Blue Boy (for his blue shirt), constantly at her beck and call. And puppy wanted a belly rub bad (if you know what I mean) and would NOT.LET.UP.

He was grinding, gyrating, and gesticulating allllll over her tiny shorts. It quickly turned from mesmerizing Barbie to Barbie and special edition lapdog Ken, who looked freshly released from a prison or the military and ready to snag himself a single mama for the night.

But Blondie was smart; she knew how to fend off horndogs like Blue Boy. She kept him on a short leash, then would extend it to drive him crazy. When she chatted with her cougar friends, he patiently waited by her side as she brushed him off with her effervescence and glass of Pinot. Then, like raging bullet she reappeared on the dance floor, freshly hydrated and continued her undulating with Blue Boy.

However, during all of this, Blondie had a friend called Tube Top Third Wheel, or TTTW for short. TTTW was the female version of Desperado Blue Boy and was constantly weaseling her way into a Blondie/Blue Boy sandwich, to which Blue Boy had the balls to push her out of the way. Persistent–also TTTW’s middle name, TTTW would fight her way back into the dance machine sandwich: she’d sought her prey, and now it was feeding time.

While this love-triangle was unfolding to classics like “Summer of 69” and “I Love Rock ‘n Roll”, another stunning little number entered the dance floor. Wearing a cut-off denim jeans-turned skirt number with an asymmetrical lace hem, a nude colored tank, copious dollar store mardi-gras-style bead necklaces and yak boots, she looked the vision of a tranquilized camel, ready to partay.

Hard to ignore Blondie, now shaking her butt like she was at one point paid to do so, Pirate Camel wanted a desperate dude grinding on her goodies, so she did what every Pirate Camel does: danced like she’s never danced before. Actually, she danced… but it looked more like a sad cry for help like when a fish is caught in one of those soda thingies and it just kind of wriggles helplessly for awhile, slowly losing consciousness as the weight of the world crashes all around it. Or something.

Pirate Camel quickly became upstaged by Python, a gypsy-looking chick with a python dress and a penchant for dancing like a two-dollar you-know. She kept licking her lips awkwardly and doing weird squats on the dance floor to impress her not-so-impressed boyfriend in the audience, probably simultaneously judging her and staring at Blondie.

But wait! Just when we thought this couldn’t get any better (and as I was well on my way to my third Midori Sour of the night), Pirate Camel returned and restored all our hopes and dreams with her wonderful dance moves–and with a partner, Led Zeppelin. Strutting in with long, luscious blonde curly locks, Led Zeppelin’s hair was a true contender for Best Hair Award of the night. Reminiscent of powdered wigs worn by government officials and judges back in London during the 1700s, it was flowing and magical as he swayed his hips to his Pirate Camel’s beat. I was expecting a unicorn to fly from underneath his hairline, expelling glitter and fairy dust while they danced to Disco Inferno, but I wasn’t drunk enough yet.

And don’t even get me started on the girl who looked like Adam Sandler, trying to be funny by pretend-humping dancing couples while her other half, a baseball-cap-wearing, whiskey-sour drinking brunette pulled the same stunts and caught the attention of Blondie, who was happy to pawn off her unwanted animal to someone new.

I should mention that after my White Gummy Bear, Blondie did the unthinkable and flaunted her singleness by dancing with an impostor Blue Boy, one who weighed a good hundred pounds heavier than Blue Boy, while Blue Boy JEALOUSLY lurked on the sidelines, clearly distraught over his blown-shot with the ever-irresistible Blondie.

So why not seek revenge with the lesser-hot-TTTW?

And from there on out, it was GAME ON for TTTW and Blue Boy. They decided they did not want me leaving the restaurant and forgetting them for the rest of my life. Ooohhhh no. They decided tonight was special and it was time to break out the best moves to upstage that booty-vibrating beyotch, Blondie.

Cue extremely awkward, outrageous dancing from the new fave couple, looking very much like a train wreck filled with unexplained family problems on both sides of this awful gruesome twosome story. If I thought Blue Boy’s moves were good before, I was totally wrong.

And that’s when Blue Boy climbed this woman like a jungle gym, swinging her left and right, picking her up, dipping her awkwardly, and ferociously eating her face and neck while they basically dry-humped on the dance floor to “Party Rock Anthem.”

It was enough to make myself stop drinking so I could purposely remember this amazing memory for the rest of eternity.

Meanwhile, while all this was going on, I peed no less than fifty times and during my several visits to the ladies’ room, found something I need to bring to everyone’s attention: Under Stall Still Foot.

Under Stall Still Foot, or USSF for short, is when you’re sitting in the bathroom stall and notice the woman’s feet in the stall next to you and they’re completely still. And in a brief moment of panic, you wonder if maybe she’s been murdered or something since she’s being exponentially creepy and NOT MOVING AT ALL and you totally played out a fake scene of yourself being viciously attacked in a bathroom stall since everyone’s busy ogling Blondie during “Don’t Stop Believin'” and it could be plausible and no one would know.

So, ever the creep myself, I sat and watched this woman’s feet for the longest time, hoping she’d move or flinch or something so I wouldn’t have to bust open the door and save her or something. I was hoping she wouldn’t be all gross like I’m assuming Elvis looked when they found him, but I guess I’ll get what I can take if I have to save a life, right?! Right?!

But then her pinky toe flinched and I decided she was safe and then went back to judging people.

The moral of the story? Alcohol ROCKS. It makes people at sports bars totally uninhibited. The perfect breeding ground for awkward parent dancing and sexy cougars and their young, salivating cubs to make for long-lasting, creepy memories.

The only thing I wish was different? That I had some of this incredible Churro Bugle Mix with me to munch on. Like popcorn and a movie, except sugar and spice crack and a train wreck. What could be better?!

So, just to clarify: Churro Bugle Mix is an addictively delicious and extremely dangerous mix consisting of Bugles chips and Dulce de Leche Cheerios, a cinnamon-roll-flavored white chocolate binding, and lots of brown sugar and cinnamon. Or, like I accurately described it: sugar and spice crack.

This crack is most definitely not whack. I highly suggest you try it…but bring it to a sports bar and people watch. It definitely makes a good companion. 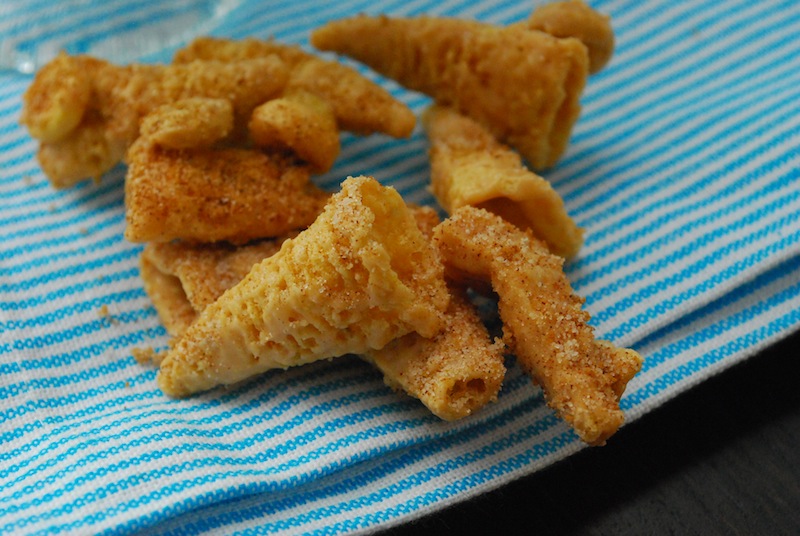 1. Line a flat surface with wax paper. Then, in a large bowl, prepare the chocolate bark according to package directions until smooth and melted. Stir in the cinnamon roll Flavor Creations to blend. Meanwhile, in a smaller bowl, combine the sugars and cinnamon and set aside.
2. Add the Bugles and Cheerios to the chocolate mixture and gently toss to coat the chip mixture completely.
3. Spread the coated chip mixture evenly onto the wax-paper-lined work space. Liberally sprinkle with the brown sugar cinnamon mixture until coated completely.
4. Allow the Bugle mix to sit for approx. 20 minutes before breaking into pieces and eating. Can be stored airtight up to 3 days. 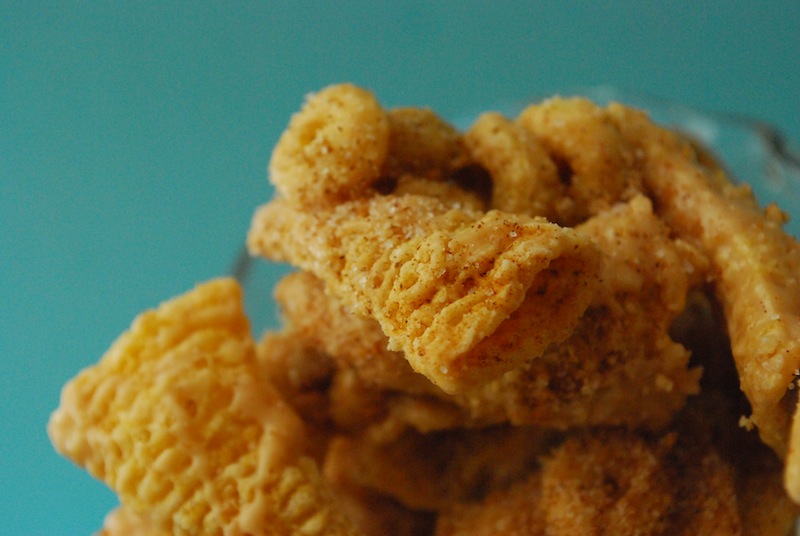 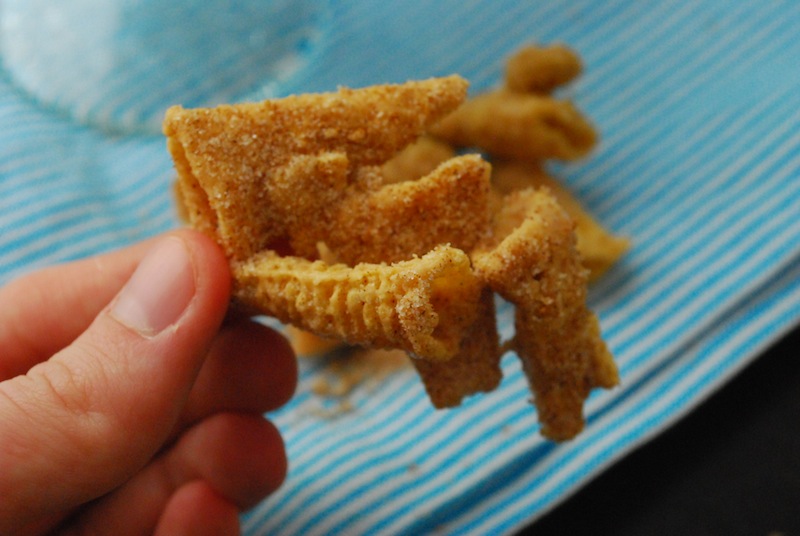 This mix is easy, fun and SO amazing. The chips and cereal don’t lose their crunchy texture, and the coating is so perfect–totally like a Churro. I know you’ll love it!

Oh, and if you’re wondering what happened to any of my aforementioned cast of characters, I suppose we’ll never know… though I can assume TTTW woke up the next morning wondering what happened and asking Blue Boy if he wanted to go shoe shopping, to which he probably promptly left; Blondie probably hit up Nordstrom the next day, weaseling a discount on designer jeans from a dapper fellow caught in her web; Python probably went home and continued to look ever-so-disgusting; and Pirate Camel… well, her and Led Zeppelin probably flew away in a magical chariot back to the Land of Amazing to the tune of “Misty Mountain Hop.”