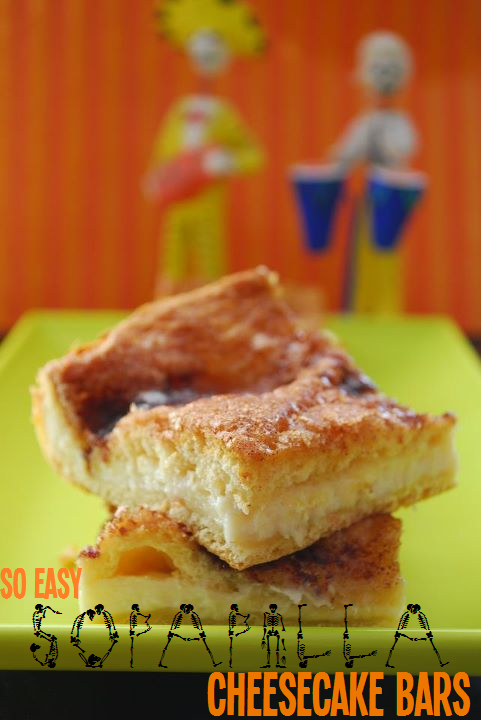 So, I’ve started my Christmas shopping.

Sometimes, to make small talk with the cashiers at stores, I’ll say “I’m so excited I found this! My ____ will love it.” Their response?

Birthday? What? Who? No! “Actually, it’s for Christmas.”

I mean, if I were psychotic enough to pick up Christmas gifts in July or something (don’t put it past me) that’d be kinda weird. That would warrant a weird eyebrow raise and look from the cashier ringing up my novelty gifts.

But it’s October. Late October. Halloween’s on Monday (can you believe it?) and that means November is on Tuesday. So obviously, I’m only like, a month and a half early.

Read: not “awfully” early. Just early. Is that a problem?

The problem with early Christmas shopping is that you either forget what you bought someone so you accidentally go overboard on them, feeling guilty because you think you neglected them, or you change your mind about the gifts you’ve already purchased because you find something even better.

The latter would be my situation today.

I always forget about Ross. I don’t know why, I just do.

But I stopped in today and found like, ten million things to get my two best friends and my mom. But I was kind of annoyed that I’d already purchased some stuff for the best friends in question. So now I have to make returns and go back to Ross to buy their rightful “new” presents.

Shopping is so hard sometimes.

But someone has to do it. Someone brave, unafraid of long lines, frustrated cashiers and unnecessary returns.

In unrelated news, my family and I, while not a single sliver of Mexican or Spanish, celebrate Dia de Los Muertos, or the Day of the Dead. Ever since I was little, our house has had little skeleton trinkets or sugar skulls, and I have taken a serious love for them.

And guess what? Day of the Dead is next week!! So I thought I’d be early (NOT awfully so) and make some amazing dessert for the upcoming celebrations.

Even if you don’t celebrate Day of the Dead, you MUST MUST MUST make these awesome So-Easy Sopapilla Cheesecake Bars. As the name implies, they’re so easy, or muy facile, if you’re feeling spicy.

If you’re unfamiliar with a sopapilla, it is a fried dough coated in cinnamon sugar and served with honey on the side, available at most Mexican restaurants. As a kid, my parents would take us to a local hole-in-the-wall Mexican restaurant called Coco Loco and we always ordered multiple orders of sopapillas after dinner–they’re a must! So after spotting this recipe on both Cookies and Cups and Pillsbury, I knew I had to make them for Dia de Los Muertos… and because I’d be stupid not to.

Don’t give me a quizzical, semi-scared look–I know what you’re thinking: Cheesecake? But cheesecake is so hard to make! You need a spring form pan and a water bath and the perfect temperature in your oven and blah blah blah.

No water bath. No spring form pan. Maybe the perfect temperature. But otherwise, this recipe is freakin’ fool-proof. It starts with packaged crescent rolls. Packaged cream cheese. Cinnamon sugar. And butter–lots of it. Then it’s baked in a 9×13″ pan, one which you have at home. 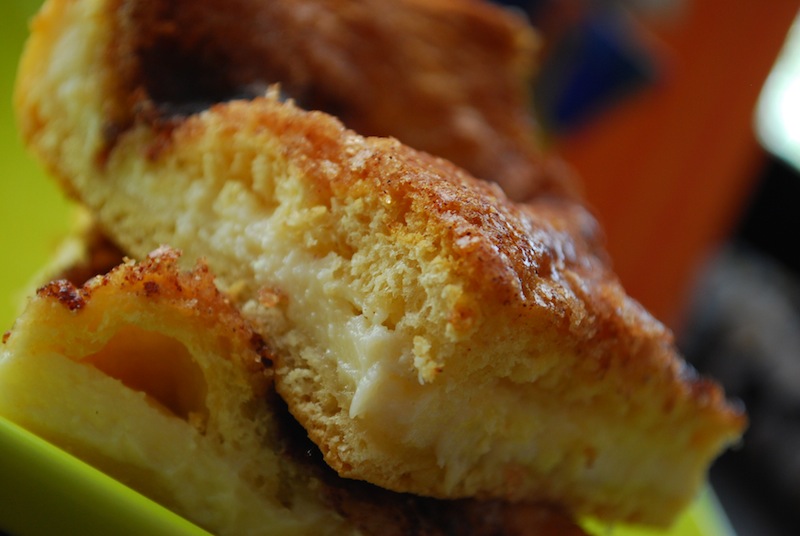 I’m always looking out for you. You can thank me later–preferably after you’ve engorged your face with this wonderful invention. 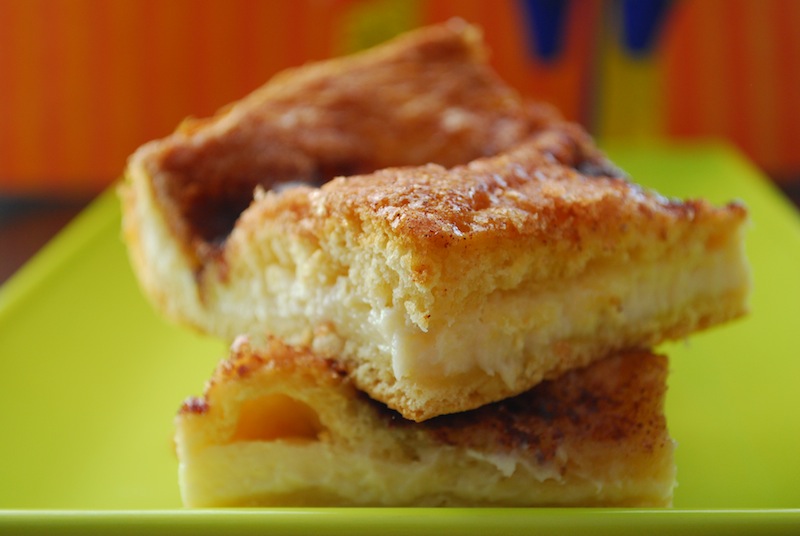 1. Preheat oven to 350 degrees F. Lightly grease a 13×9″ inch pan with cooking spray (I used a metal pan, but glass works as well).
2. Press one container of crescent rolls into the bottom of your pan in one flat sheet. Press the perforations and seams together to seal. This is your bottom crust.
3. Meanwhile, in a medium bowl, beat together cream cheese, 1 cup of the white sugar, and vanilla until creamy, about 2 minutes. Spread cream cheese mixture over the bottom crust in an even layer.
4. Top the cream cheese mixture with the second package of crescent rolls, again sealing the seams and perforations by pinching the dough together. (One quick tip is to pre-seal it on your counter before placing it on top of the cream cheese–makes it easier and less messy).
5. In a small bowl, mix together the remaining 1/2 cup white sugar and the 1 T cinnamon until blended. Pour the melted butter over the top crust, and sprinkle evenly with the cinnamon sugar mixture–load it on there! Bake approximately 30 minutes, until golden brown. Allow cheesecake bars to cool about 30 minutes-1 hr on the counter, then place in the fridge to finish cooling and set before cutting into bars. Store covered in fridge.

I really can’t think of a better way to celebrate Day of the Dead than eating Jessica’s freakin’ spectacular Chicken Enchilada Spaghetti (extra cilantro, please!) for dinner and these cheesecake bars for dessert. Genius.

Stay tuned for another Day of the Dead recipe coming later this week, and a new Halloween cooking video (our last H’Ween video for the year, waaah) by Friday!