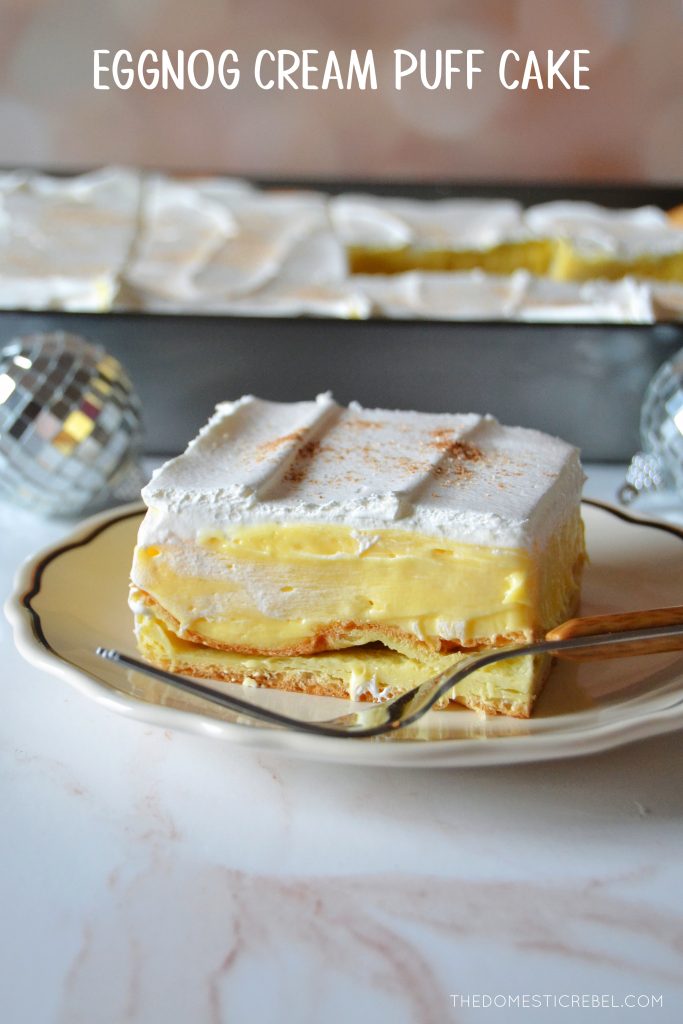 This Eggnog Cream Puff Cake is a fun twist on the classic cream puff cake – made with buttery, rich eggnog! If you love the ‘nog, you’ll love this cake!

So I have already decorated for Christmas. I know, but what about Thanksgiving? Eh. Thanksgiving isn’t my favorite and Christmas is, so I am perfectly fine bypassing it. And you don’t have to live with me, soooo, Ima do me.

And in the 7 days since I have deemed it Christmas season (in my head only), I have already purchased eggnog (for this recipe) and peppermint bark, had a peppermint mocha, and listened to Christmas music. Call me crazy, it’s okay.

I know eggnog is the quintessential holiday drink, but I’m not a fan of drinking it. I prefer to add it to desserts to ramp up the flavor and make something unexpected with it. This Eggnog Cream Puff Cake is the perfect way to serve it! 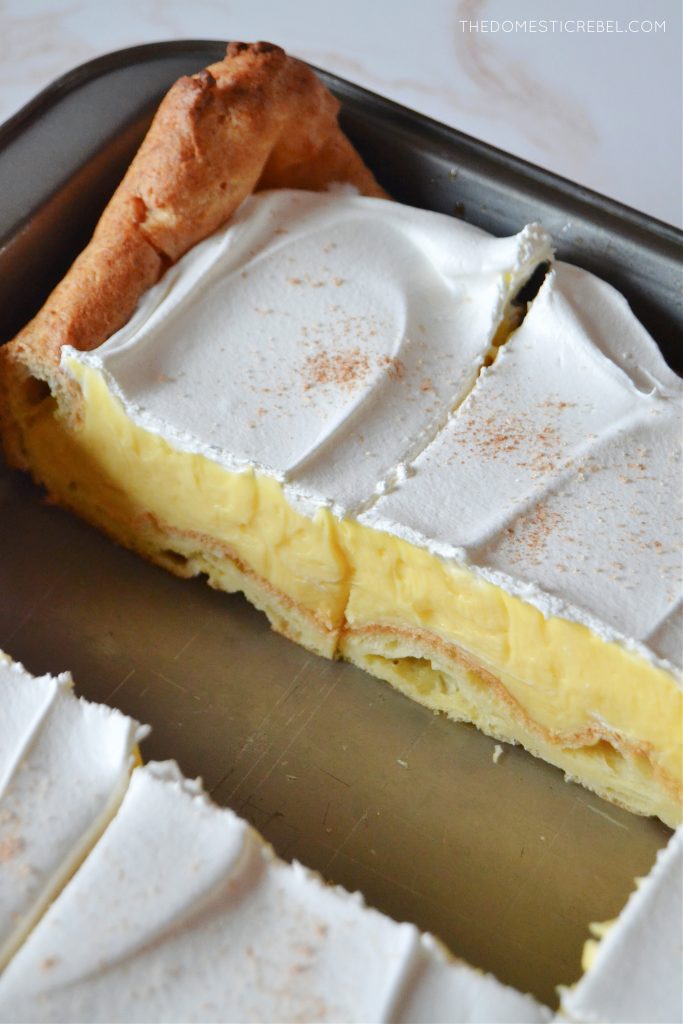 This cream puff cake has three components: the pastry crust, the eggnog pastry cream filling, and the whipped cream topping. Let’s break down the layers!

The crust is called a pate a choux pastry and is the same type of pastry you would use to make churros or eclairs with! However, instead of piping them into their shapes, we’re going to press the dough into a greased pan and bake it. It’ll get nice and puffy and golden. It consists of water, a little sugar, salt, and butter boiled together. Once it comes to a boil, you’ll add in some flour and beat the mixture with a wooden spoon. Then you’ll whip in some eggs with an electric mixer. Super simple!

The filling is a semi-homemade pastry cream. Instead of a traditional pastry cream, we’re using a shortcut by way of pudding mix! It’s so rich and creamy, especially with the eggnog, that no one will know it started from a box of pudding mix, I promise! You’ll just combine some cream cheese, two boxes of vanilla pudding mix, and eggnog together until thoroughly mixed, then spread it over the cooled pastry crust.

You can top this cake with whipped cream or whipped topping – your choice!

Rich and creamy with that sweet spicy hint of nutmeg, this Eggnog Cream Puff Cake will soon become your new go-to this holiday season! 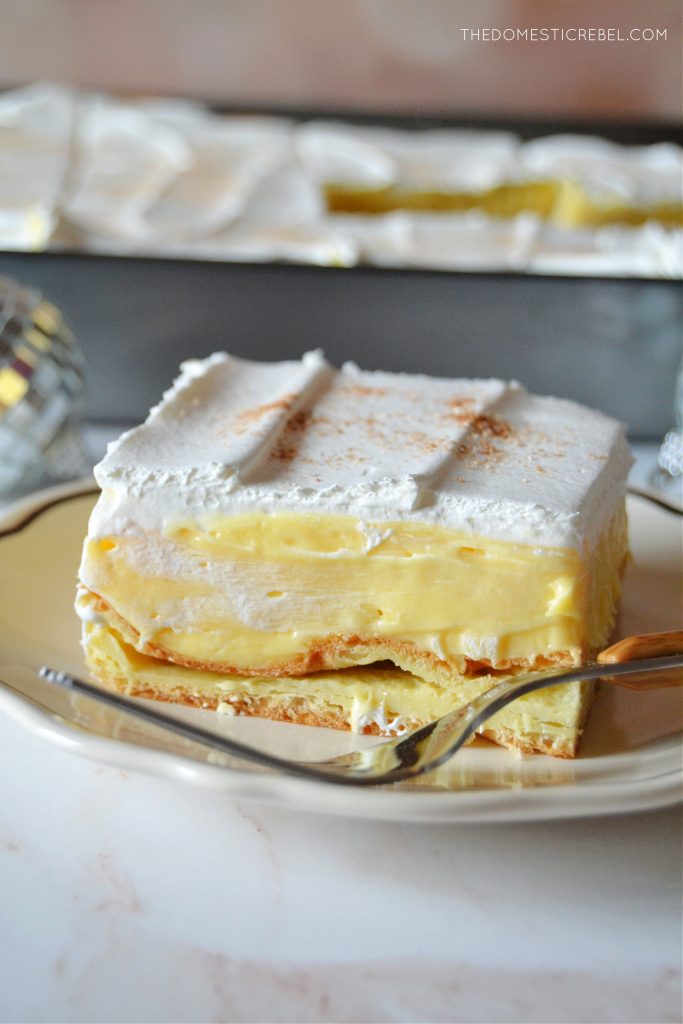 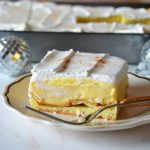 Remember, we are only using 2 & 1/2 cups eggnog for the liquid in the filling - no additional milk. Do NOT follow the directions on the packages of the pudding mix or your filling will not set up. 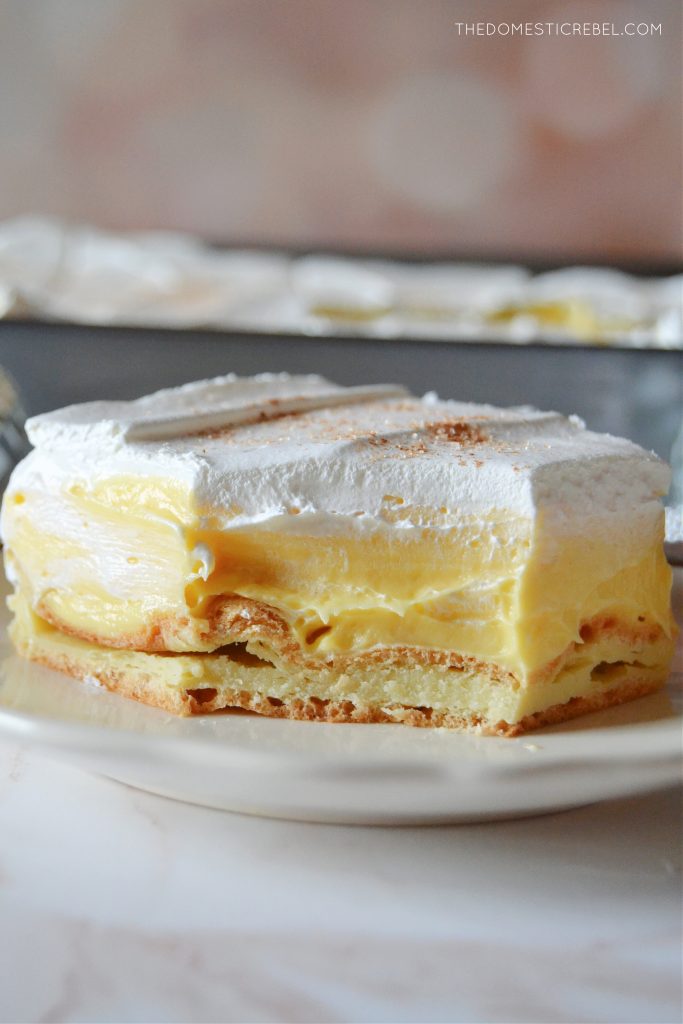 I know you guys are going to adore this cake!

Craving more of the ‘nog?! Check out this recipe! 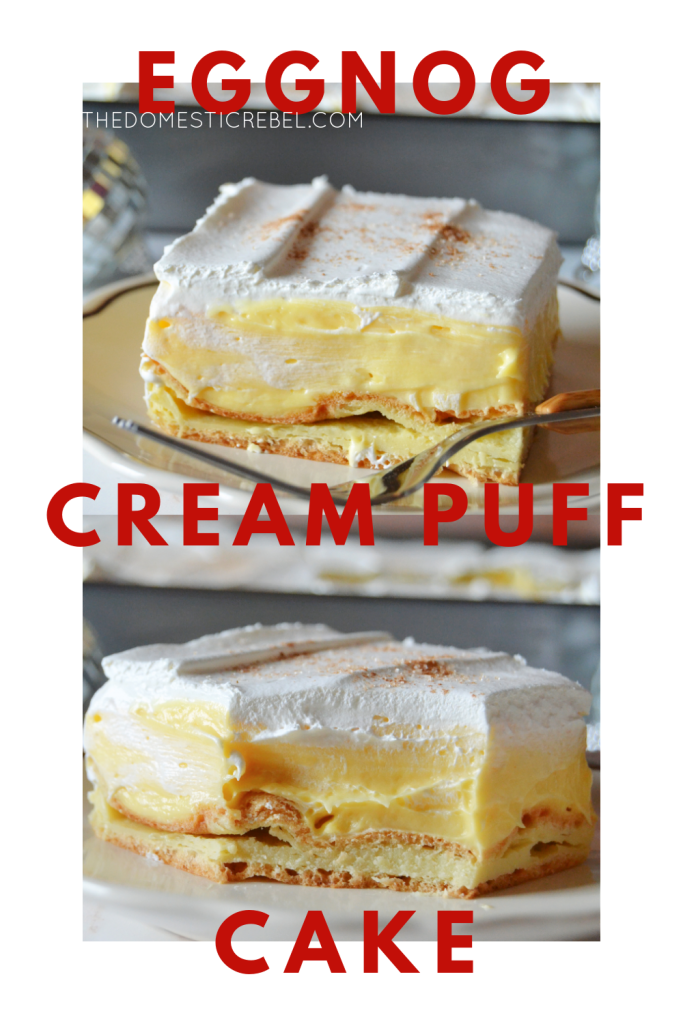