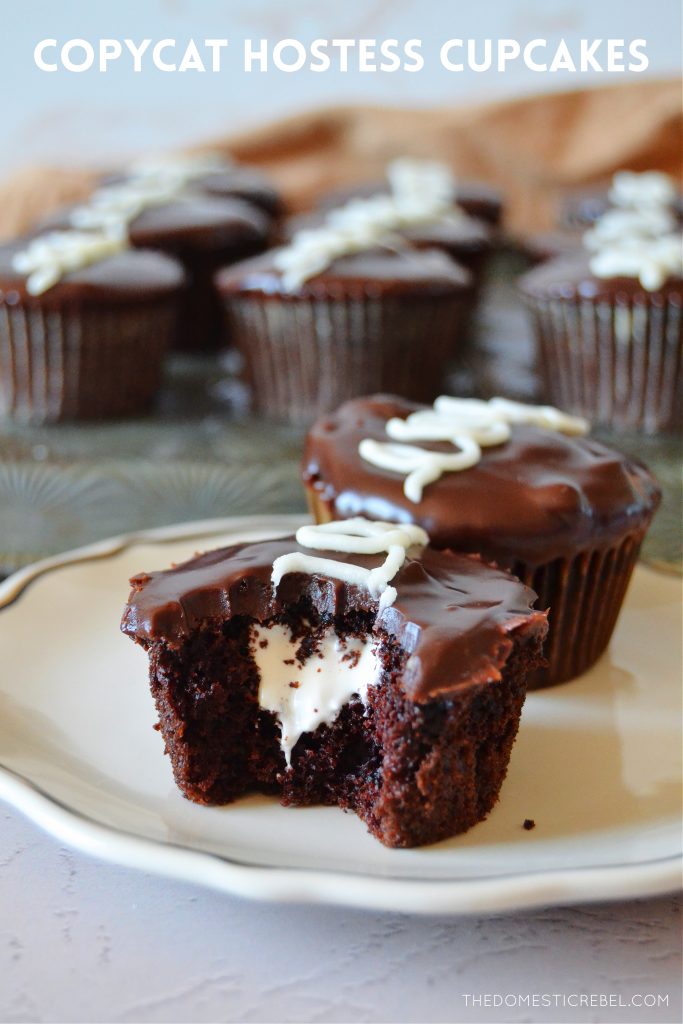 These Homemade Copycat Hostess Cupcakes are seriously delicious! They taste even BETTER than the ones you remember from your childhood because they’re made from scratch!

Growing up, we had full rein of my grandma’s pantry when we were under her care. This meant while she was watching her soap operas and was too distracted to pay attention to us, we’d sneak in from the den and raid the cupboard for all the snack cakes: Nutty Bars, Twinkies, Cosmic Brownies, and Hostess Cupcakes. It’s a miracle we didn’t weigh a ton each. I think that was due to the fact that she had a giant pool in the backyard that you had to bribe us to get out of in the summertime.

To this day, those snack cakes hold a nostalgic place in my heart. But they don’t have the same flavor memory as I remember. I remember them being so tasty, but when I purchased some of them recently (not naming names to protect the guilty), they were so artificial, I couldn’t handle it. Now, I’m not one to scoff at anything artificial (Fruity Pebbles and Pop-Tarts are forever a fave) but these were not good. So I set out to create my own.

And thus, these homemade cupcakes were born! 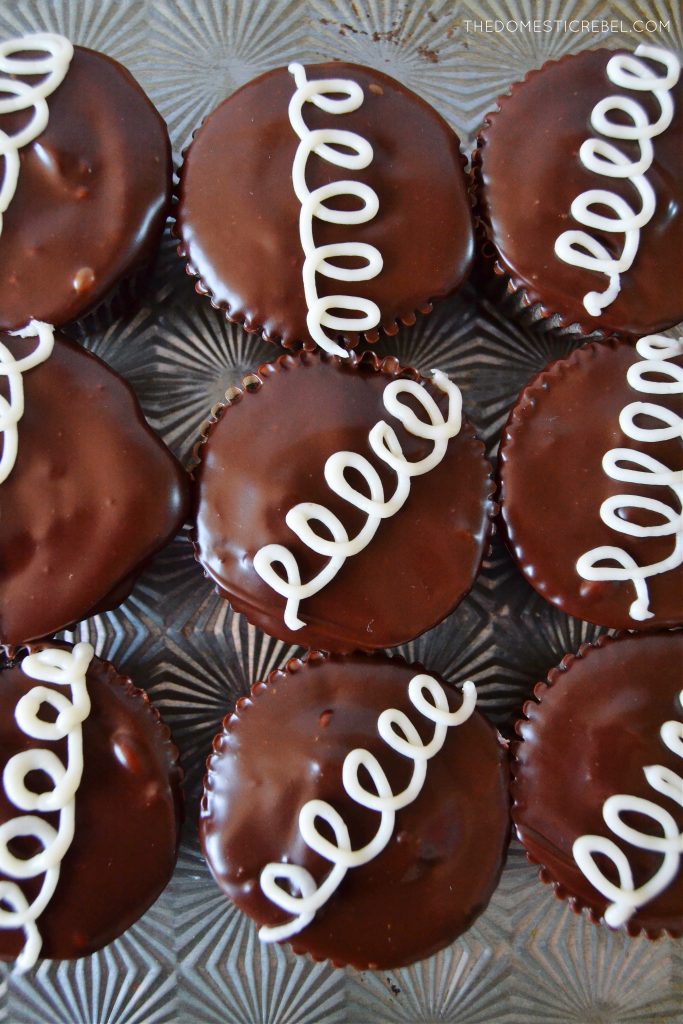 Homemade Hostess Cupcakes have a few steps, but I promise they’re easy (if not slightly labor intensive). 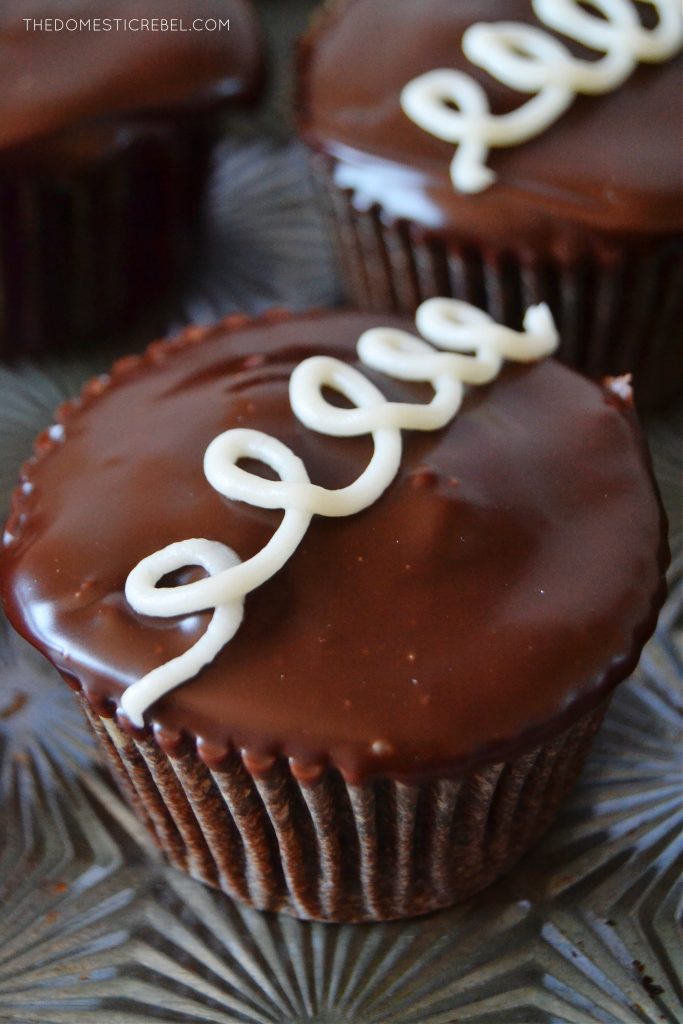 First, the cupcakes. This is a classic chocolate cupcake, but it has to be moist and chocolaty like Hostess’. A dry cupcake? We don’t know her. Oil as the fat in this recipe yields a moist cupcake, and brewed hot coffee richens the chocolate notes making it an ultra chocolaty cake.

Next, the cream filling. This is where we adapt a little because the original is so saccharine. I used marshmallow fluff/creme mixed with some softened butter, confectioners’ sugar, and a splash of vanilla. Essentially, a marshmallow frosting. Boy, was it good!

Then, the chocolate ganache. We love to see it! Here, to balance the sweetness of the cream filling, I used semi-sweet chocolate chips mixed with hot heavy cream. You could use milk chocolate, but I think the semi-sweet is perfect.

And lastly, the loop-de-loop. This is essentially a super quick buttercream we’ll make in the teeniest amount for a garnish. You’ll pipe it on using a tiny Wilton #3 tip (or by snipping off a tiny corner of a Ziploc bag) and make a looping pattern across the top of the dipped cupcakes. If it makes it easier, think of making a bunch of connecting, cursive ‘e’s’.

Moist, chocolaty, rich and delicious with that addictive cream filling, these Homemade Hostess Cupcakes are one to beat! 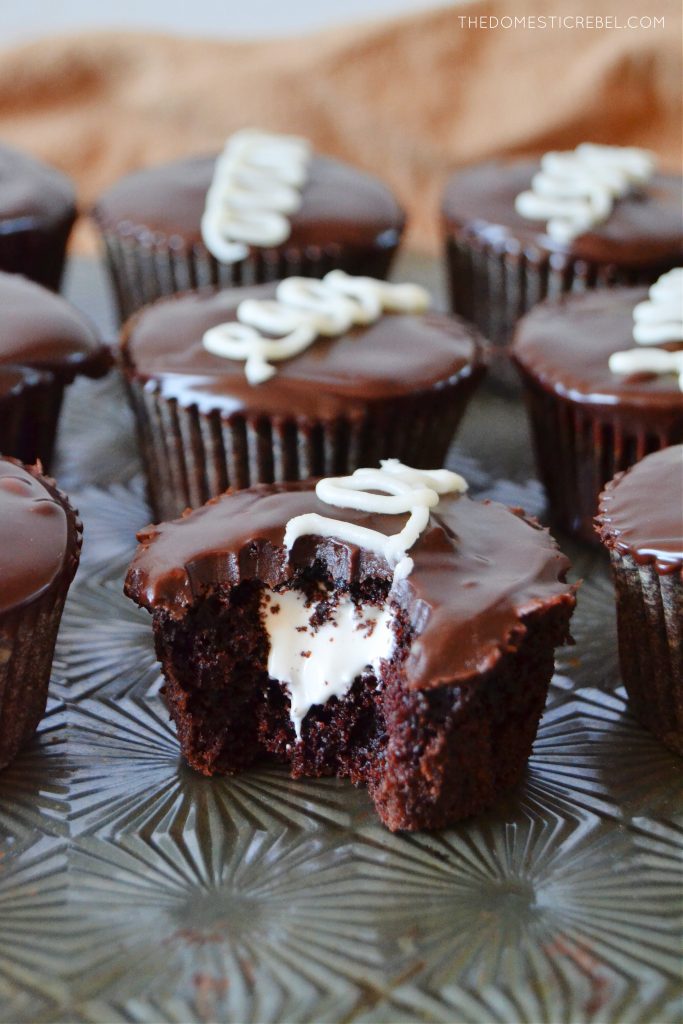 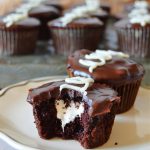 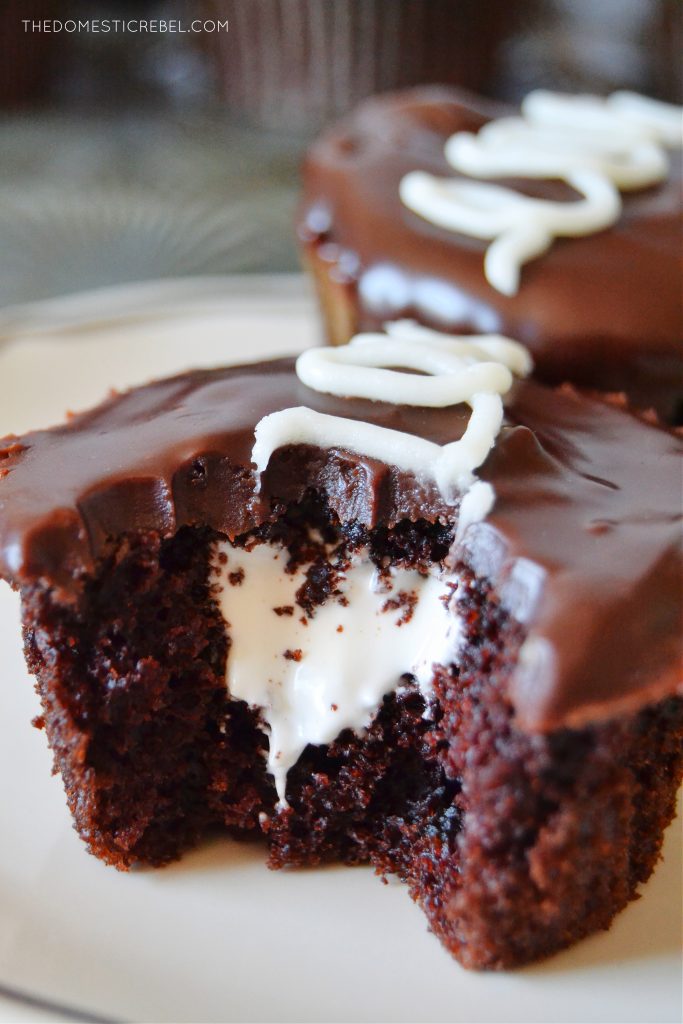 These cupcakes are so tasty – I know you’re going to love them! 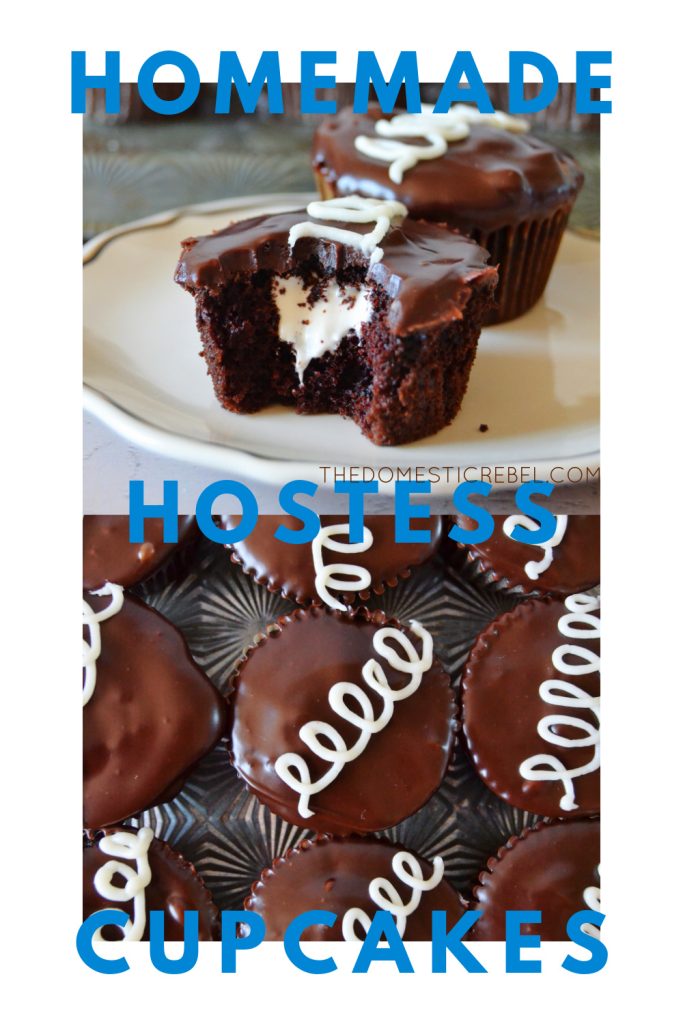 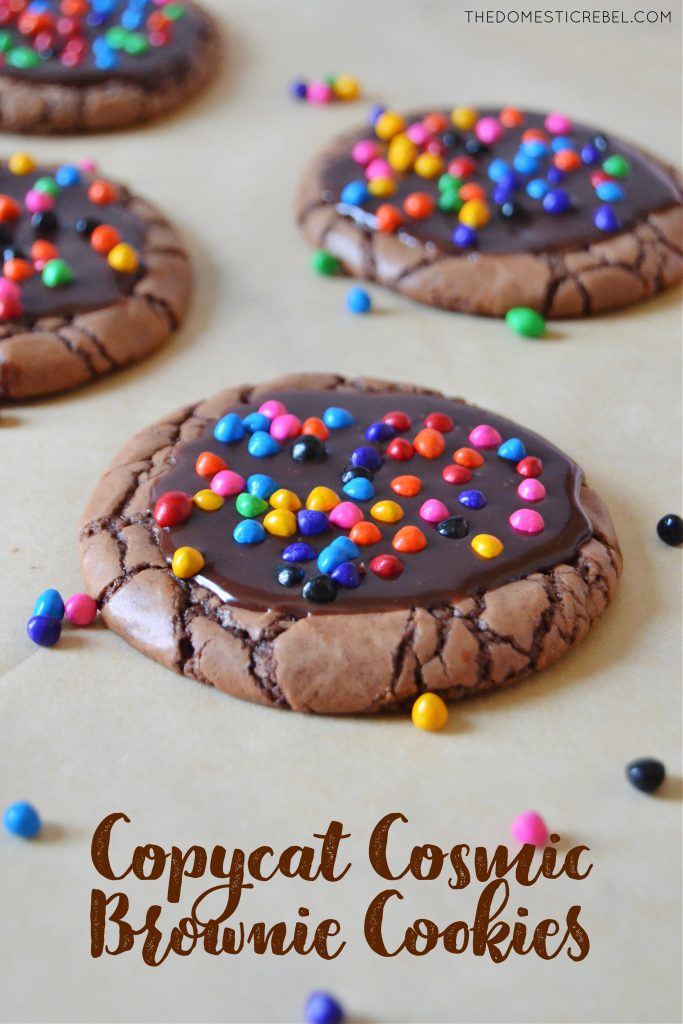 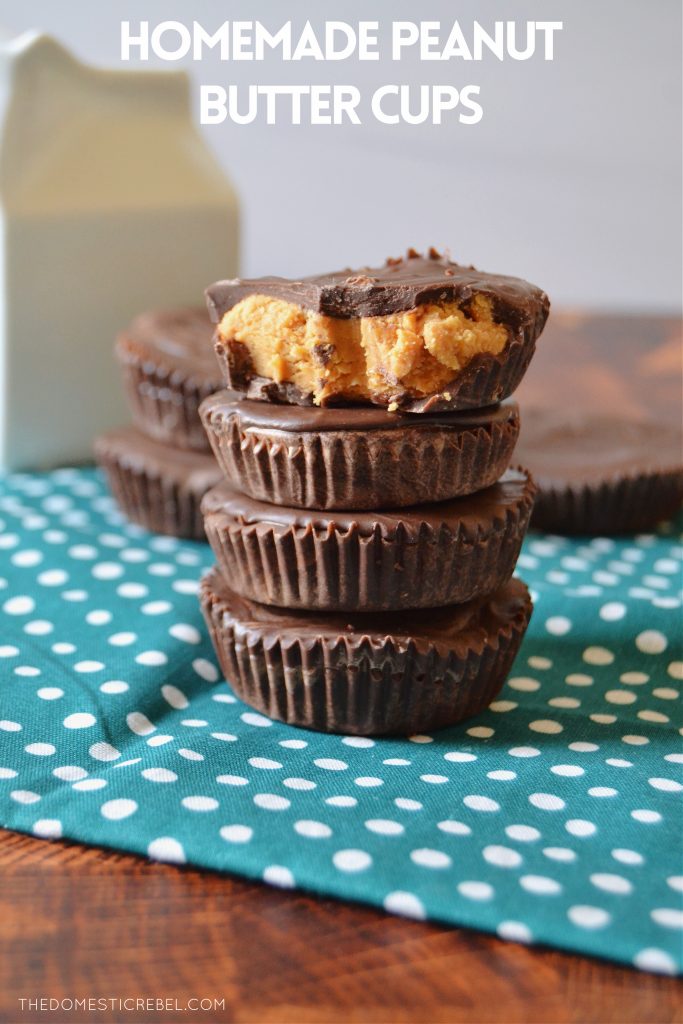