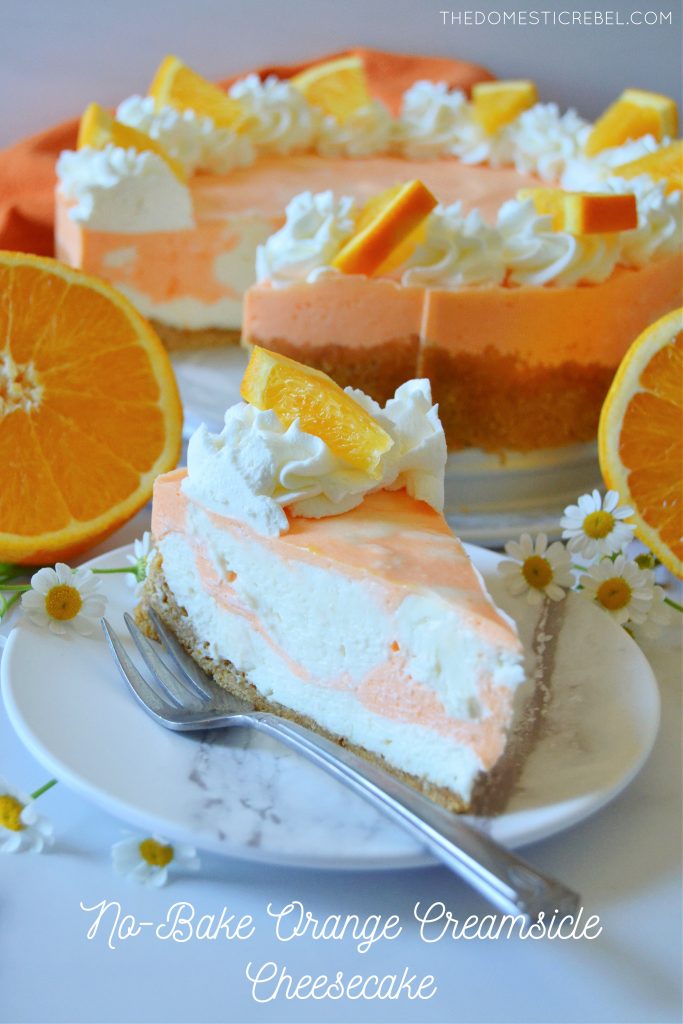 Reminiscent of our childhood, this No-Bake Orange Creamsicle Cheesecake is absolutely AMAZING! Swirled layers of creamy cheesecake and bright orange combine to create a decadent yet light and fluffy no-bake dessert.

Apparently I am very inspired by ice cream bars this month because I have not one but two ice cream-inspired desserts. As one does, I suppose!

I didn’t even plan this, but I’m not mad at it, either! Who doesn’t love ice cream bars or the treats inspired by them? And if you love orange dreamsicles, you’re going to LOVE this cheesecake! 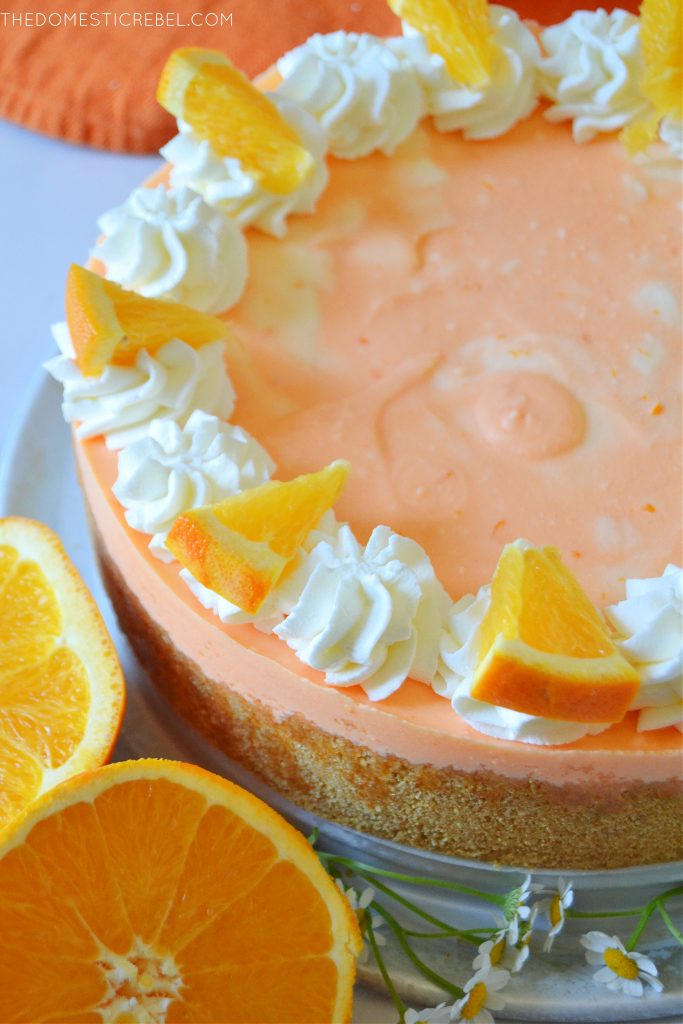 I’ve been trying to think of some springtime treats and desserts for Easter events and figured a nice, dreamy and light cheesecake would be perfect. Cheesecakes are always a relatively easy but totally impressive dessert to serve to company or for a holiday meal and this one is not only delicious but gorgeous, too. Plus, the orange flavor is super spring-y and just perfect. 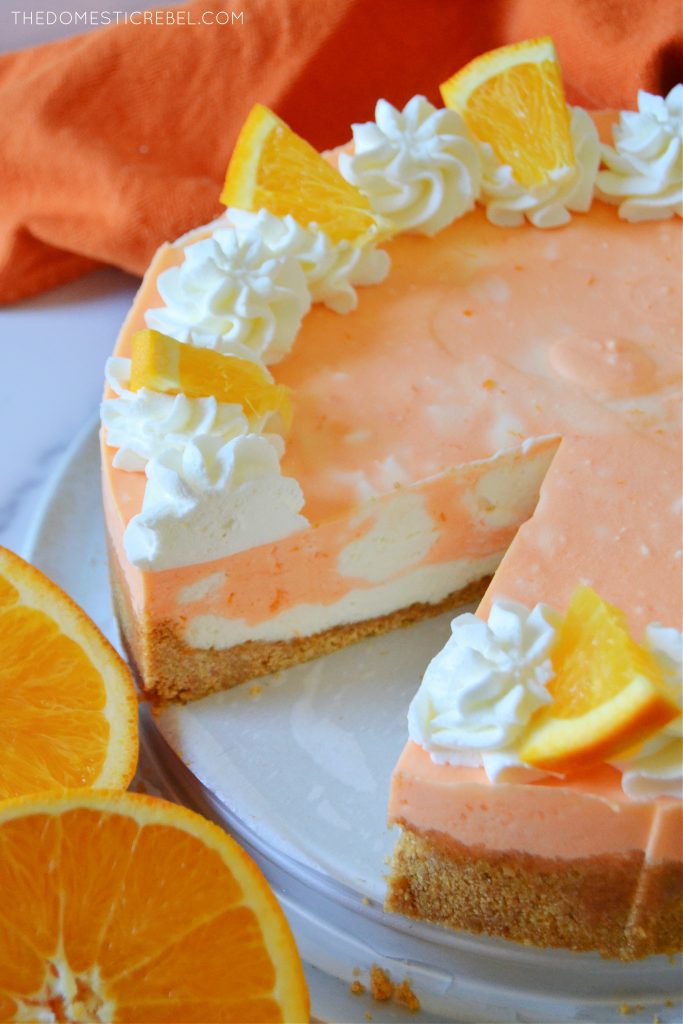 There are a few elements to making this Orange Creamsicle Cheesecake happen, so let’s go over them: 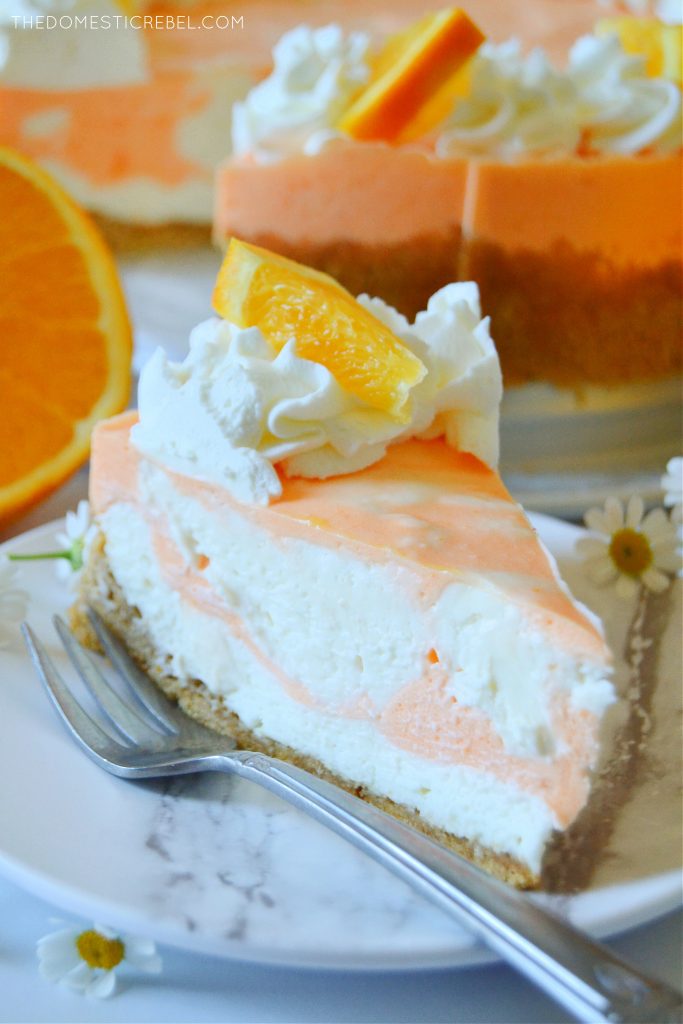 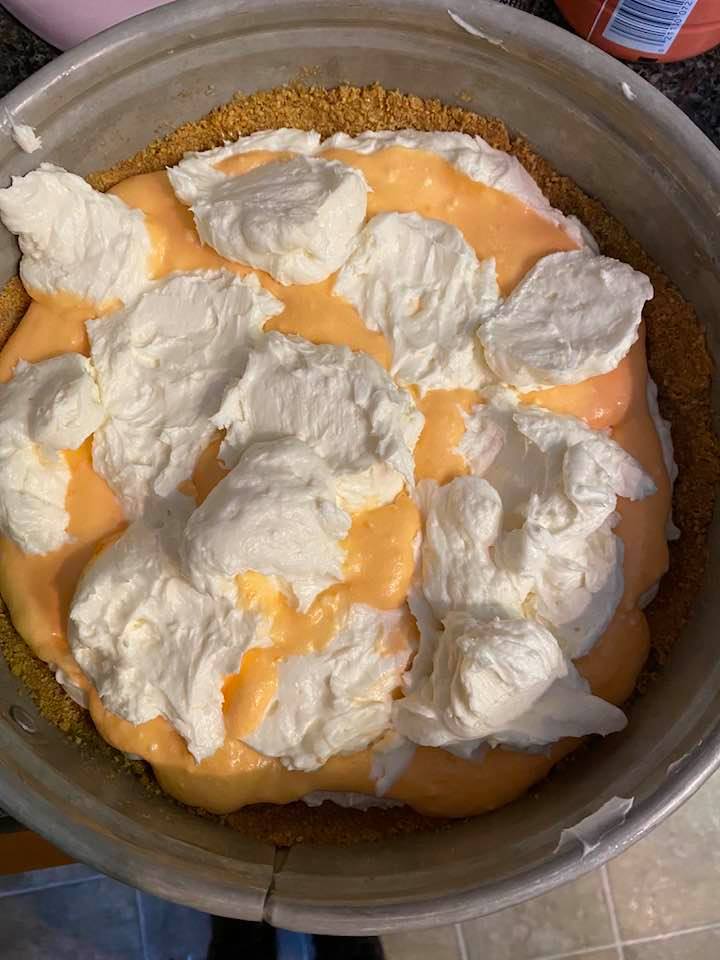 The filling has two components: the regular cheesecake and the orange part. The regular cheesecake is just cream cheese, granulated sugar, and vanilla whipped together until smooth, and then we’ll fold in some freshly whipped cream to make it fluffy and extra creamy. For the orange part, we’ll whisk together some orange gelatin, fresh orange zest and boiled water and let it cool completely, then whisk in some of that fresh whipped cream. This makes the orange part super creamy and thickens it up as well. Then you’ll just layer the two mixtures in the pan alternating them to create that layered and swirled effect. Both mixtures have different textures (the no-bake cheesecake is very thick and the orange one is thinner) so you can’t spread them or even swirl with a knife as well, but it looks amazing in its imperfection, trust me! It may even look lumpy because of the different textures, but this is normal! The photo above ^ is right before I spread the dollops of cream cheese as best I could and before the final orange layer was added. As you can see, it will be kinda lumpy. No biggie! 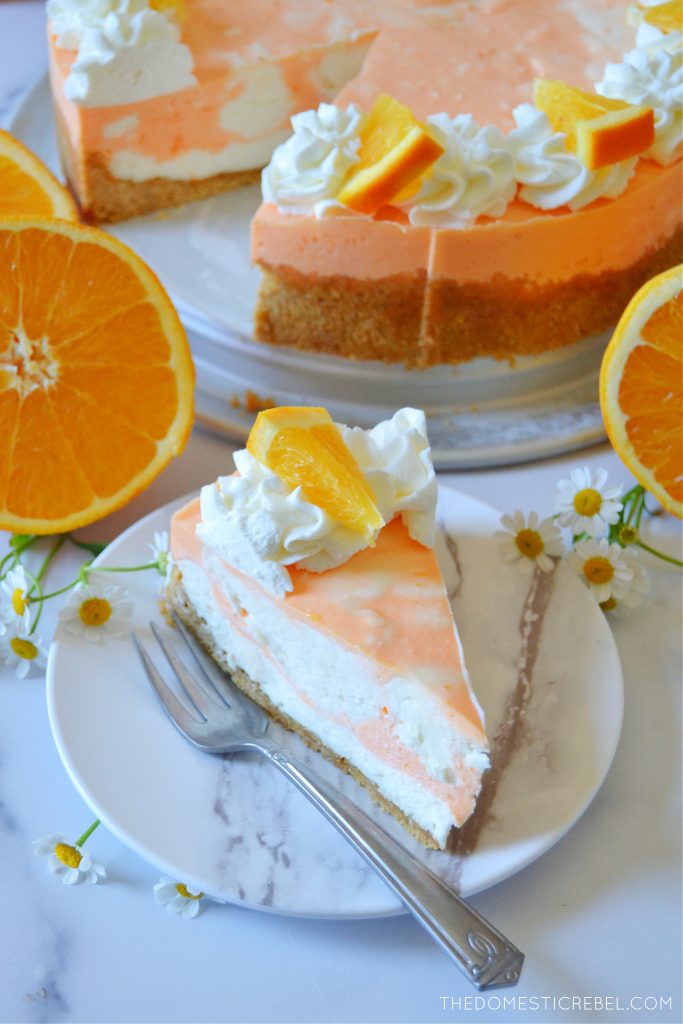 I garnished this simple cheesecake with some more freshly whipped cream and some orange segments to really drive home the orange flavor! 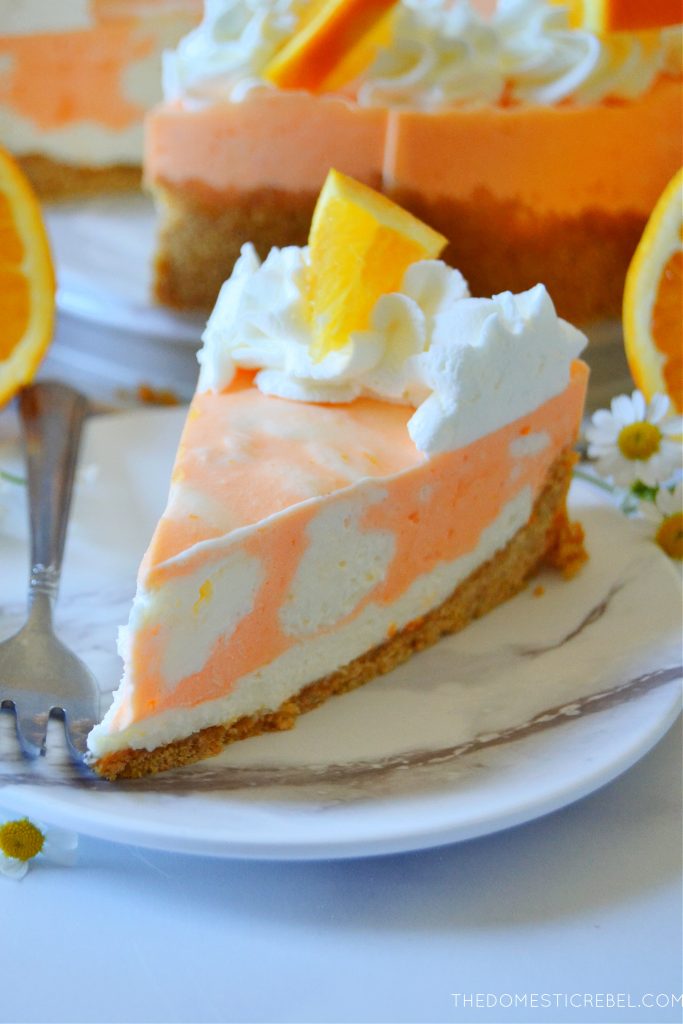 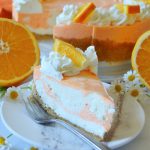 For the Orange Layer: 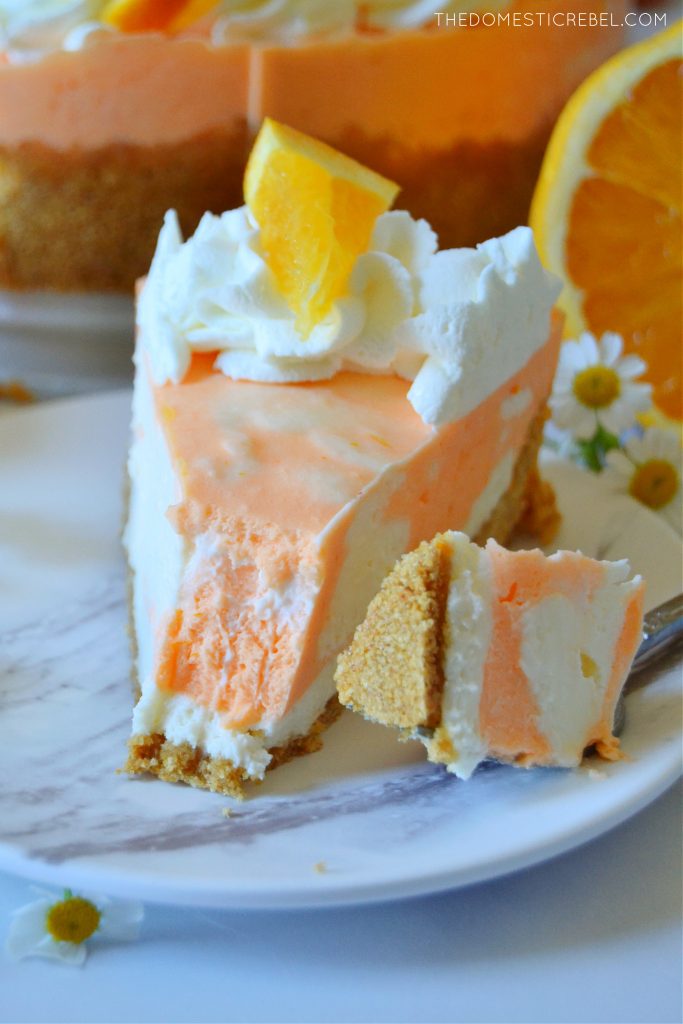 I love how cool, refreshing and creamy this tangy and bright cheesecake is! 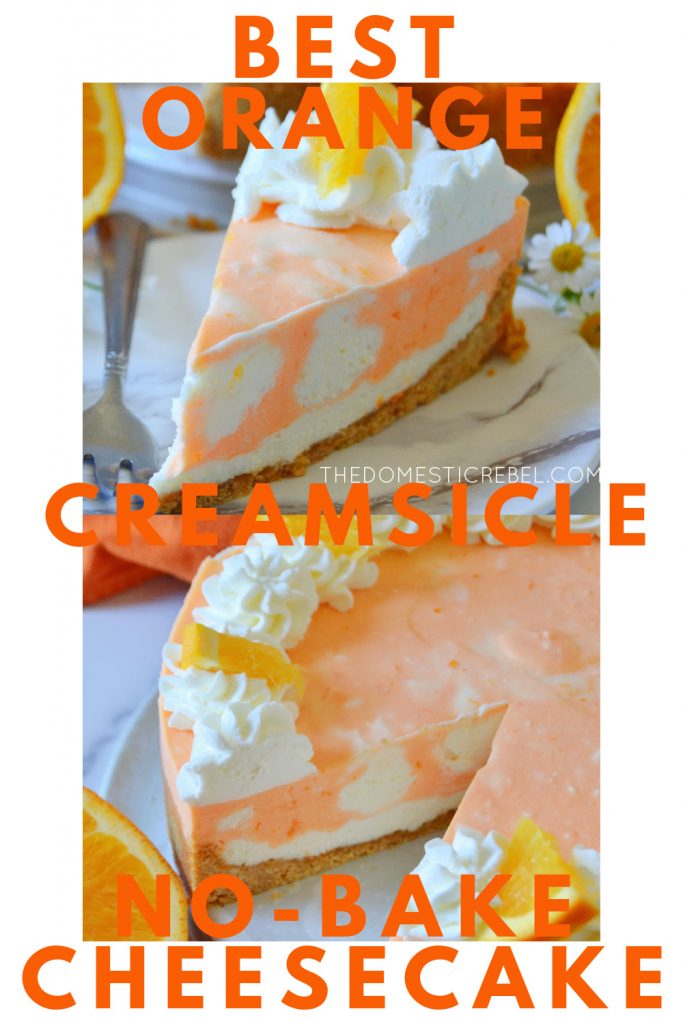