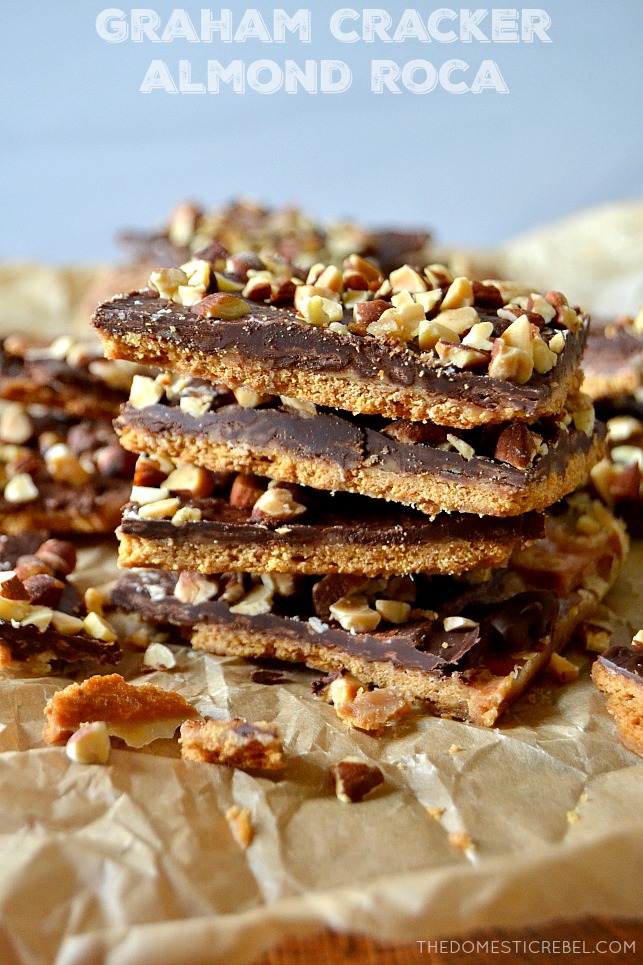 Candy can be so finicky and temperamental that it is often avoided by many (including myself at times in the past!) because we’re always so scared we’re going to mess things up. I know for a long time I was petrified of candy thermometers – something about them and their measurements (soft crack, hard ball) was confusing and intimidating. But now that I have a list of easy candy concoctions under my belt, I am more confident in whipping up candies for the holidays.

And I want to prove to you that you can do it, too! This toffee couldn’t be simpler. It doesn’t require a candy thermometer or any special tools, it comes together in under an hour, and it tastes AMAZING. I love graham cracker toffees – in fact, my Pecan Praline Pie Bark is one of my most popular recipes this time of year (and for good reason – have you tried it yet?!). It’s an iteration on graham cracker toffee, too. In fact, that very recipe inspired me to make this almond roca version since the original pecan praline version was such a hit! 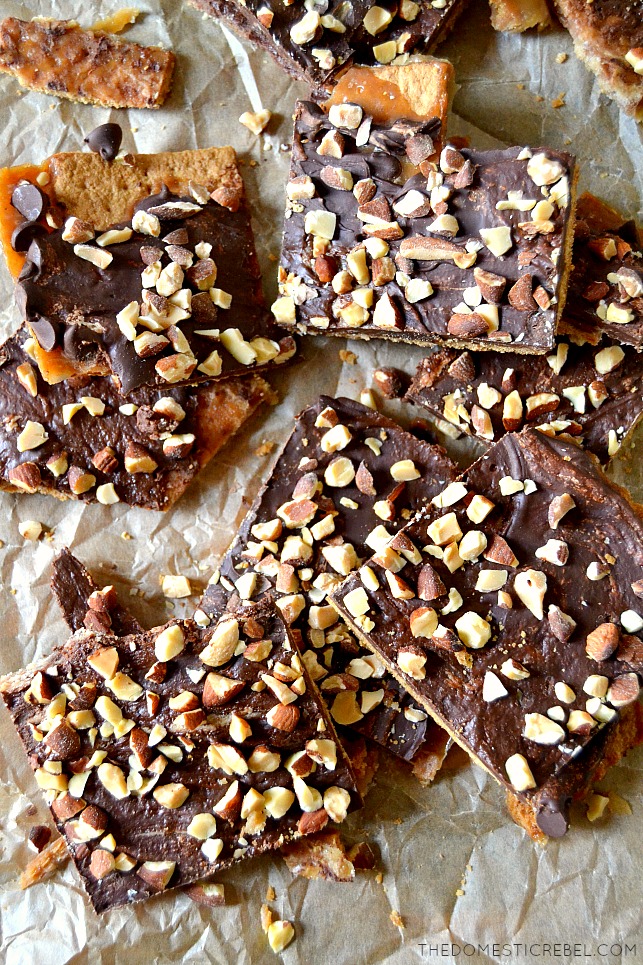 The toffee starts with its base, which is honey graham crackers. Lay them in a single layer in a 10×15 rimmed jelly roll pan lined with foil and greased. You can also use parchment, but I find greased foil works better. Then you’ll make your toffee mixture, which is just butter, brown sugar, and a little vanilla. Boil it up and pour it over the graham crackers as evenly as possible. Bake the toffee for a mere seven minutes, then sprinkle on some chocolate chips, bake for just another minute and a half, spread the chocolate into an even layer and sprinkle liberally with chopped almonds. 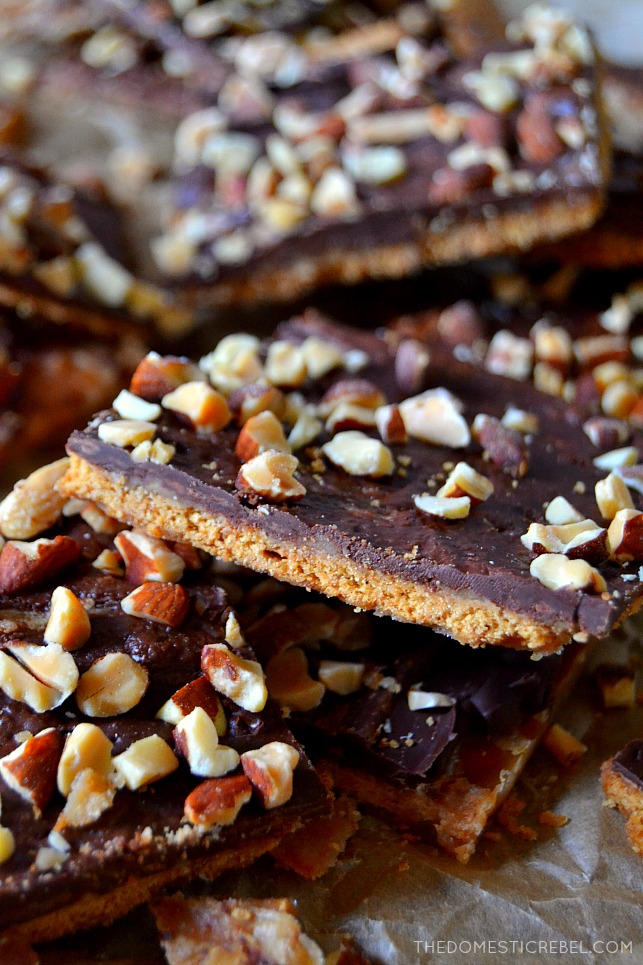 The hardest part is letting the chocolate and toffee set, which can be expedited in the refrigerator but does taste better if it sets at room temperature. 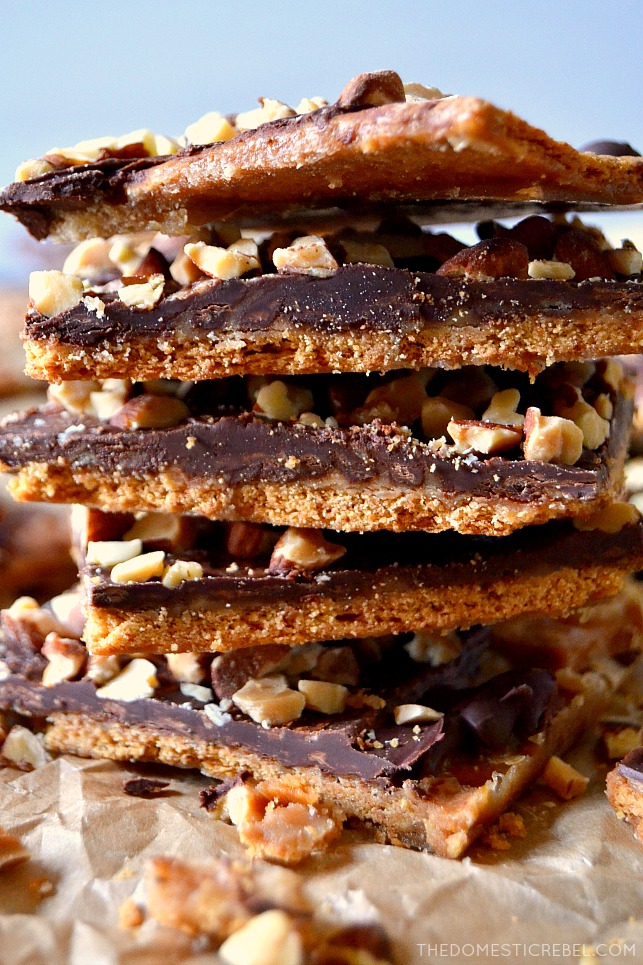 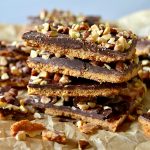 I used salted roasted almonds, but that's what was available to me. Raw almonds will also work, or you may use slivered or sliced almonds.  Since chocolate is a big part of this toffee, I recommend using a higher quality chocolate chip brand, such as Guittard or Ghirardelli. 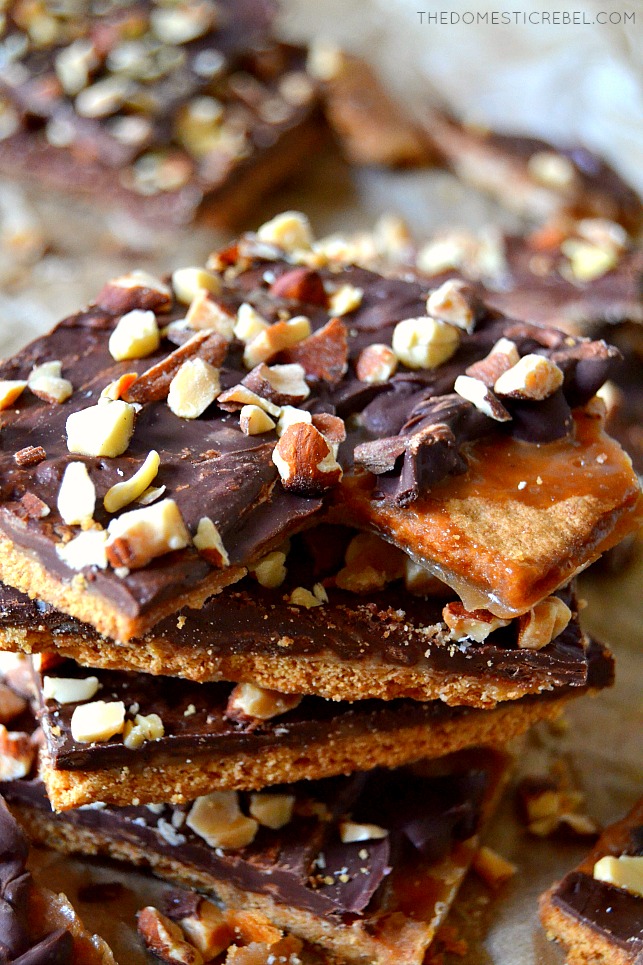 This toffee is CRAZY good – I know you’re going to love it!