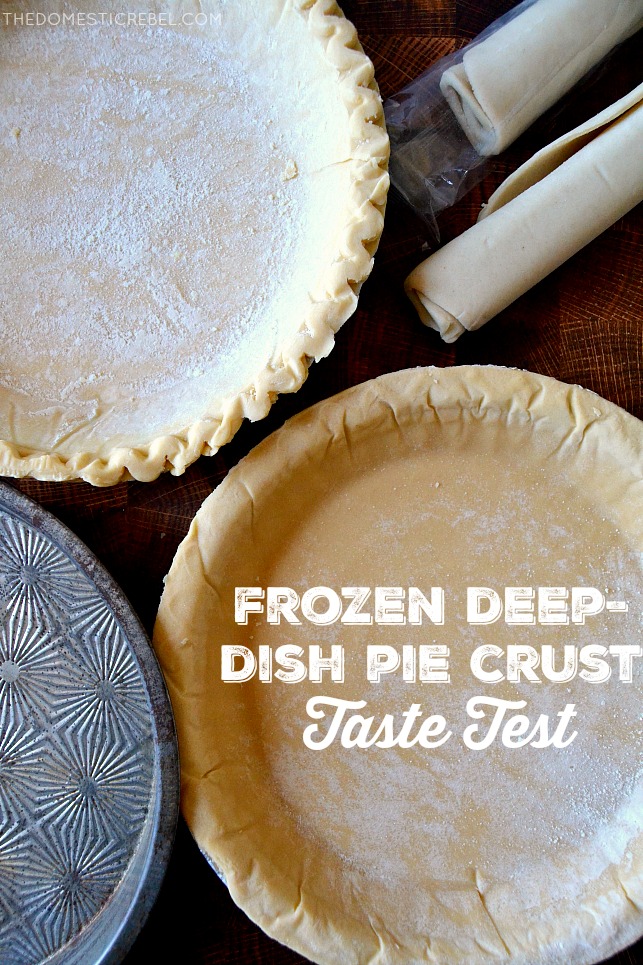 This Frozen Deep-Dish Pie Crust Taste Test is perfect for those of us who don’t have the time to make our crusts from scratch! My comprehensive taste test will help you make the tastiest choice!

Friends, it’s here!! I have teased this moment for awhile on Instagram Stories and now we’re official: my pie crust taste test is LIVE!

8 pie crusts. 1 afternoon baking them. Four testers, myself included. An overwhelming winner AND an overwhelming loser. Nasty words were said; I will repeat them. One pie crust made my cute neighbor use the F word.

A little about this test: I am not ashamed to admit I regularly use frozen deep-dish pie crusts. They are easy, efficient, and taste good enough when I am stress baking through the holidays. After all, it’s mostly about the filling, right? That’s what I thought until I tried some of these. I firmly believe some of these crusts could easily make or break your pie or quiche!

I tested 8 pie crusts, all frozen except for one refrigerated pie crust because I couldn’t find the frozen version of it. I made sure to select pie crusts from stores you can hopefully find nearby throughout the country, whether it is my store (like Safeway) or one of their sister stores like Vons or Albertson’s.

All of the pies were baked according to package directions for the respective pies which usually stated to let the pie crust thaw briefly at room temperature for about 10-20 minutes, then prick all over the crust bottom and sides with a small knife before baking. Only one pie crust recommended blind baking (by using pie weights or dried beans); I will list which that was below.

I found that pricking holes was generally satisfactory in creating a nice, blind-baked shell. Some I would recommend using a blind bake method with weights because they shrank or puffed up considerably.

Now, let’s get to the testing! To spare ya, I’ll start with the overwhelming WINNER: 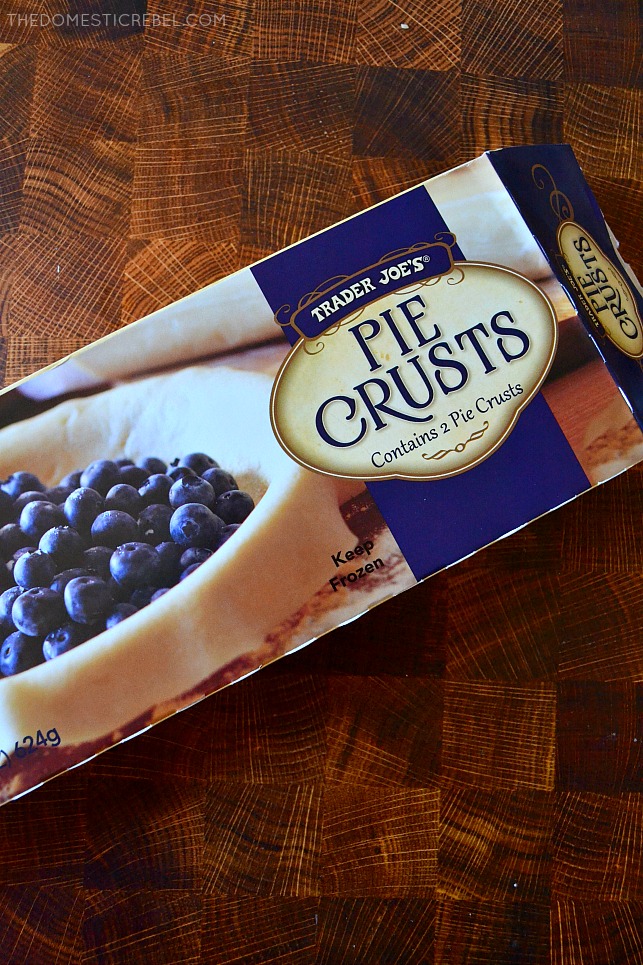 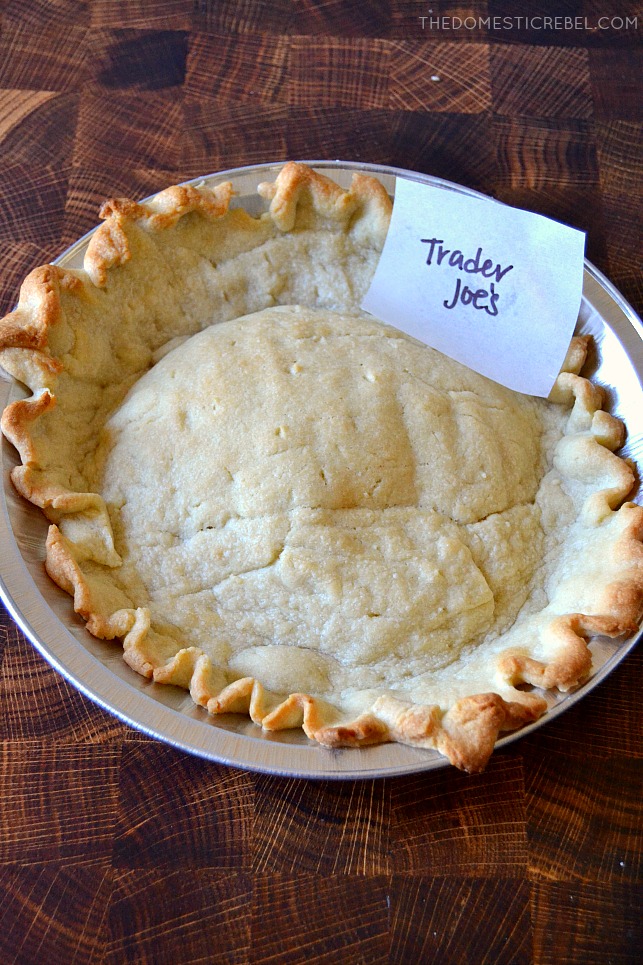 Directions: Let thaw overnight in fridge, then bring to room temperature – about 40 minutes. Preheat oven to 450 degrees F. Fill the pie pan with the crust; prick holes all over the bottom and sides or fill with pie weights. Bake 9-11 minutes.

Why it won: This was the overwhelming winner of the 8 pie crusts we tasted. For one, it is the only one I tasted made with real butter and you could definitely taste it! It was buttery, puffy, sturdy, fluffy, had a good consistency and wasn’t dry or crumbly. It wasn’t super flaky – almost more of a shortbread cookie kinda, in that it was light and fluffy more than flaky. It was sweet without being too over-powering and would make an excellent savory quiche or a dessert pie. I found with the prick-method of baking, it did puff and shrink a little inconsistently, but perhaps the pie weight method would work best. One tester said “this isn’t obvious that it is premade; could be passed as homemade.” 10/10 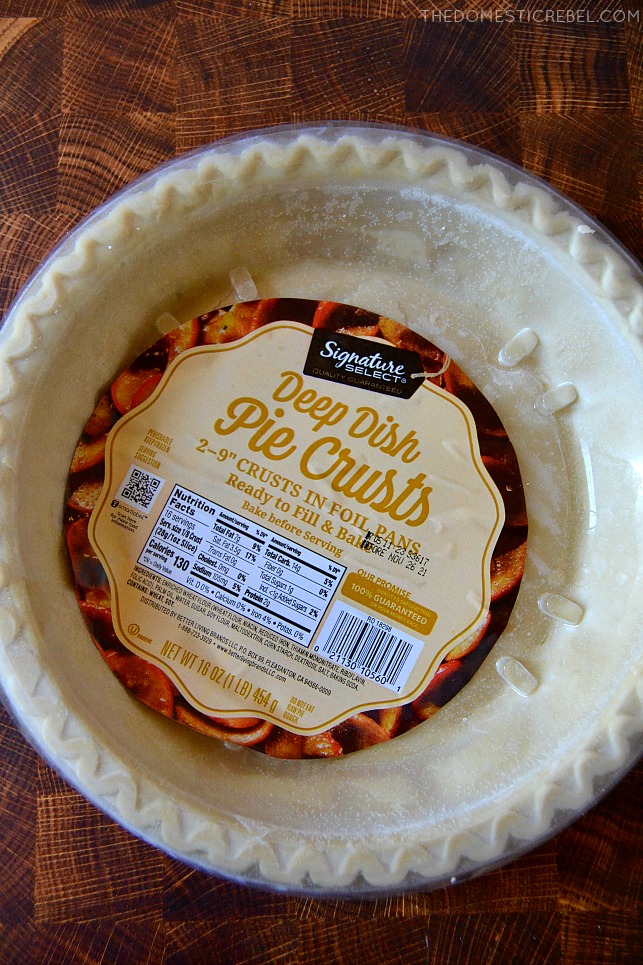 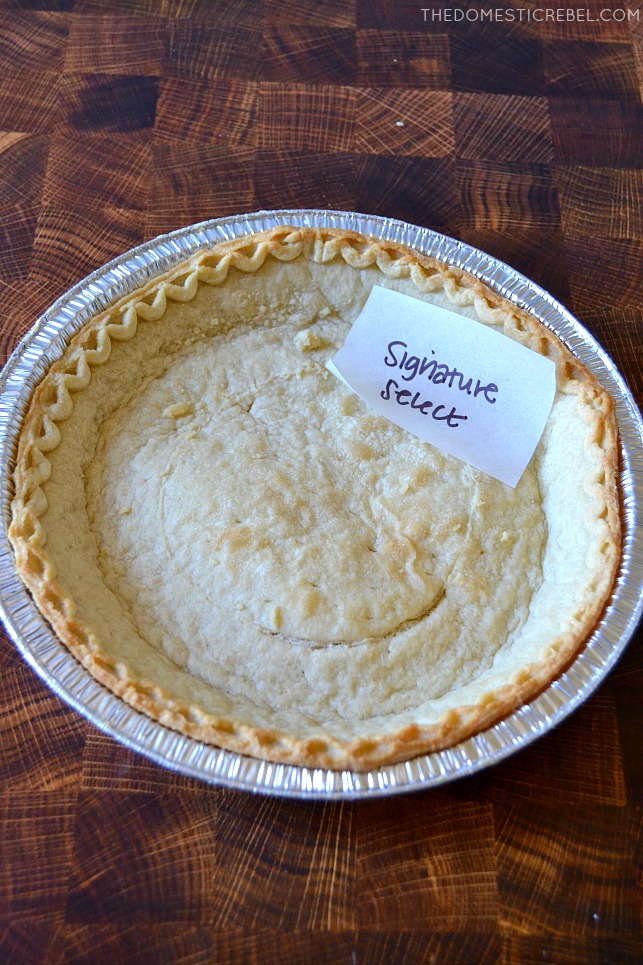 Directions: Preheat oven to 400 degrees F. Thaw briefly at room temperature for about 20 minutes. Prick all over bottom and sides of crust with a knife. Bake 7-9 minutes.

The verdict: This was a great neutral crust. Some tasted buttery, others were way too salty, but this one remained a true neutral which would be perfect for savory or sweet dishes. It had a little bit of a doughy flavor and texture, but it was still sturdy and baked consistently. One tester said it reminded her of a buttery biscuit texture-wise: light, but a touch crumbly. Wasn’t overtly sweet or salty; it had a good balance. We rated this one a 7/10. 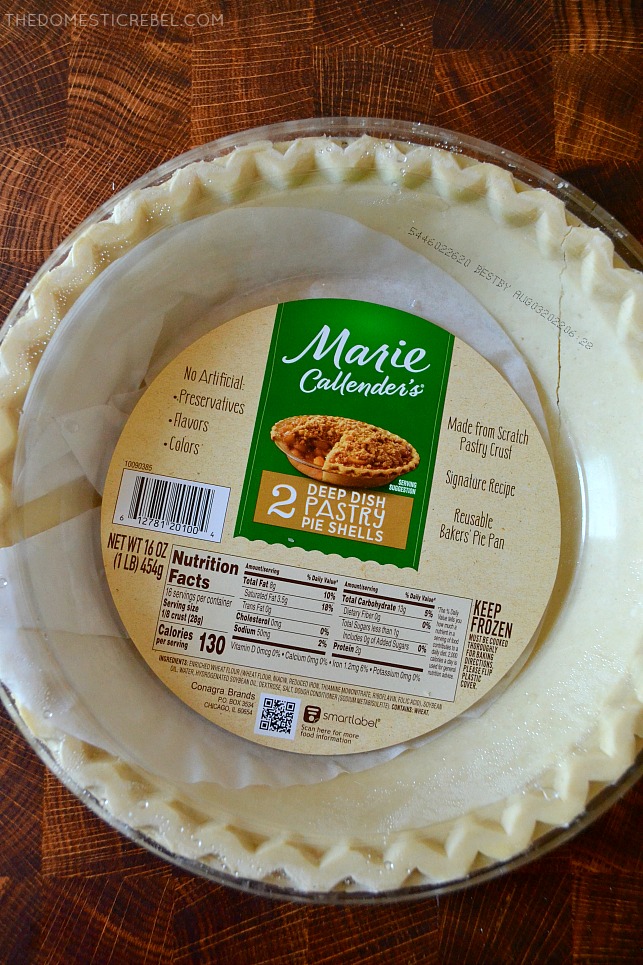 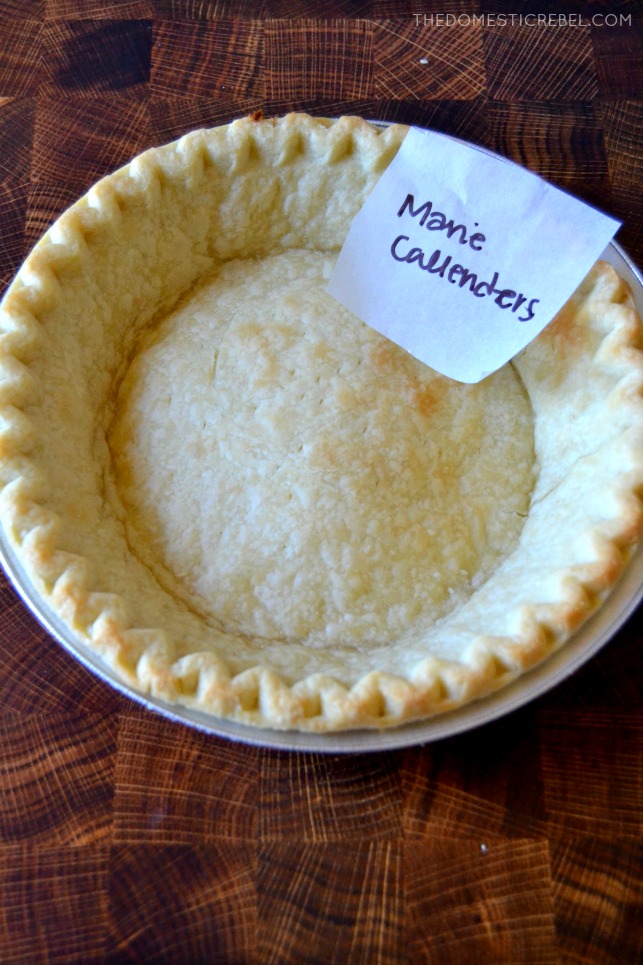 The verdict: I was expecting great things from Marie Callender’s since I grew up eating at her restaurant. I did like this pie crust because it reminded me of her chicken pot pies. It was a little flaky but mostly doughy in taste and texture. It had a good neutral flavor – hence why I could envision it as a chicken pot pie but also a crust for a banana cream pie – but all testers found it was extremely doughy. Also, in the two pack, both crusts were split so it is definitely prone to breaking easier. 6/10 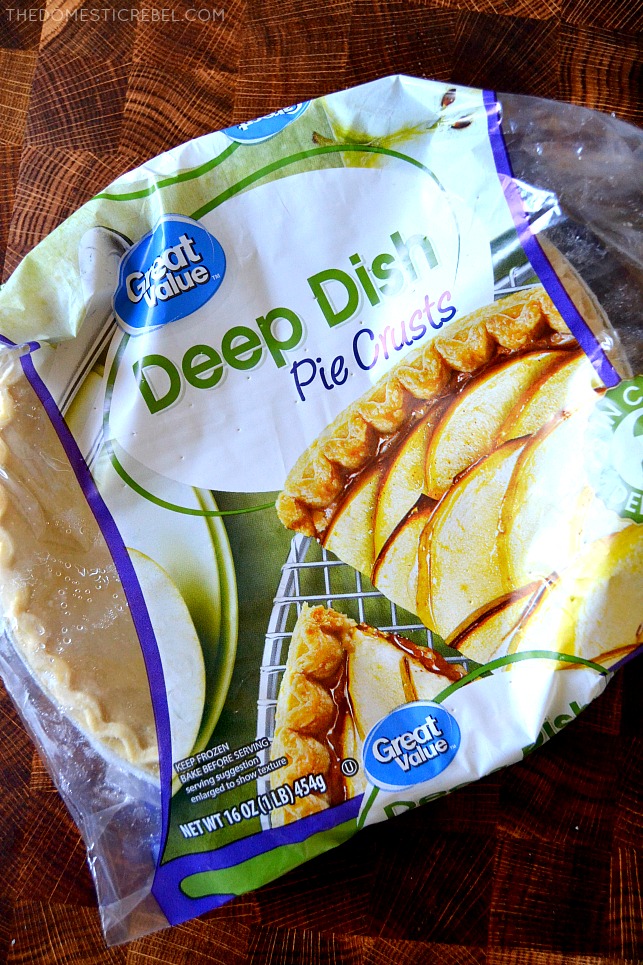 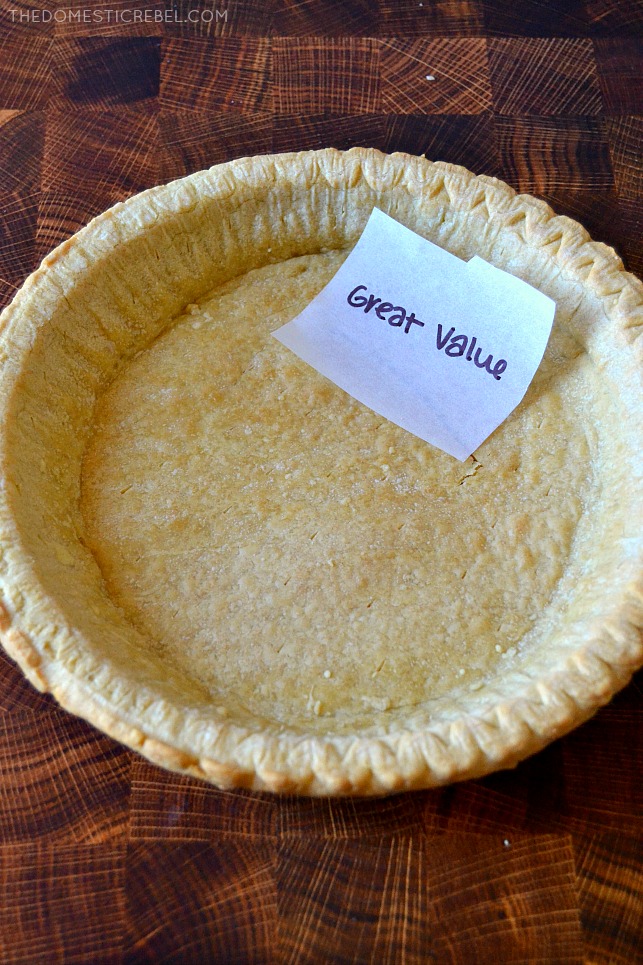 Directions: Preheat oven to 400 degrees F. Thaw briefly at room temperature. Prick all over with a knife. Bake 10-12 minutes.

The verdict: Probably the easiest to find since Walmart’s are everywhere, this pie crust baked nicely and barely shrunk or puffed up too much which was nice. All testers agreed it had a very artificial butter flavor – like the refrigerated canned biscuits that have that “buttery topping.” I grew up eating canned biscuits and fake butter flavor so these pie crusts didn’t bother me as much, but other testers found the butter flavoring to be a bit strong. The dough was quite crumbly as well, despite it baking so consistently. 5/10 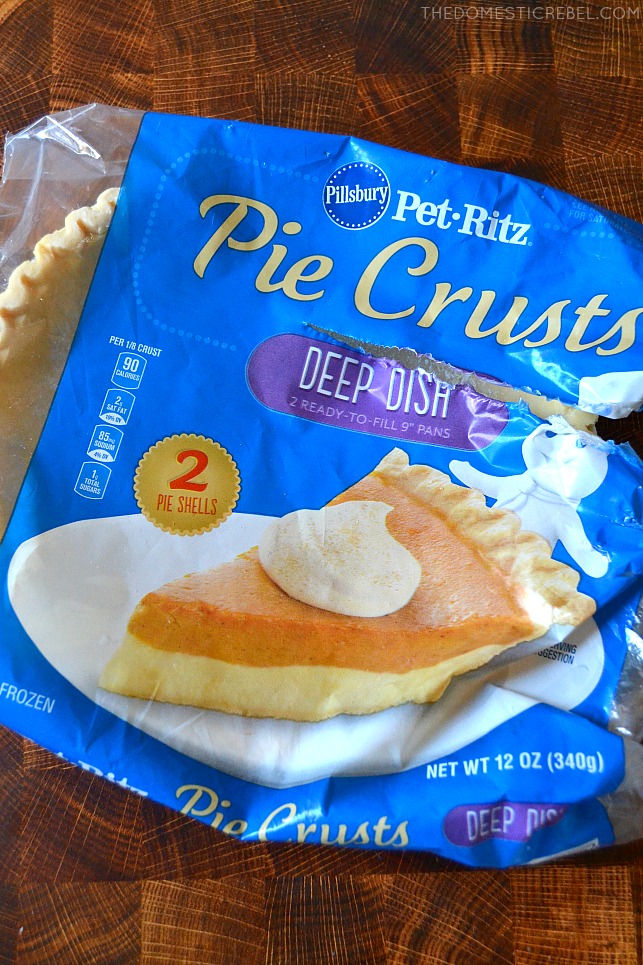 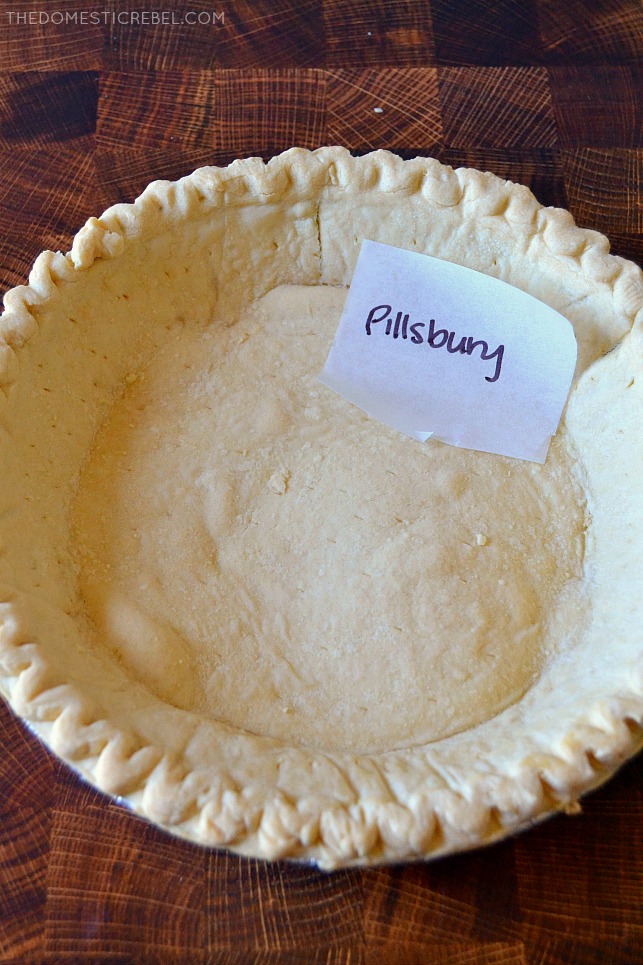 The verdict: Pillsbury’s was one of the most neutral pies we’ve tasted – it wasn’t sweet or salty. It kind of lacked flavor in this way because it was so one-note, but I think it would be a perfectly fine pie crust for a more substantial or flavorful filling. It was pretty sturdy and flaky in texture, but it kind of had a chalkiness to it. It also had a slight aftertaste on its own. The testers agreed this wasn’t as “tasteful” as the other pie crusts. However, it did bake up consistently with minimal puffing and hardly any shrinkage and was one of the more attractive pie crusts. 5/10 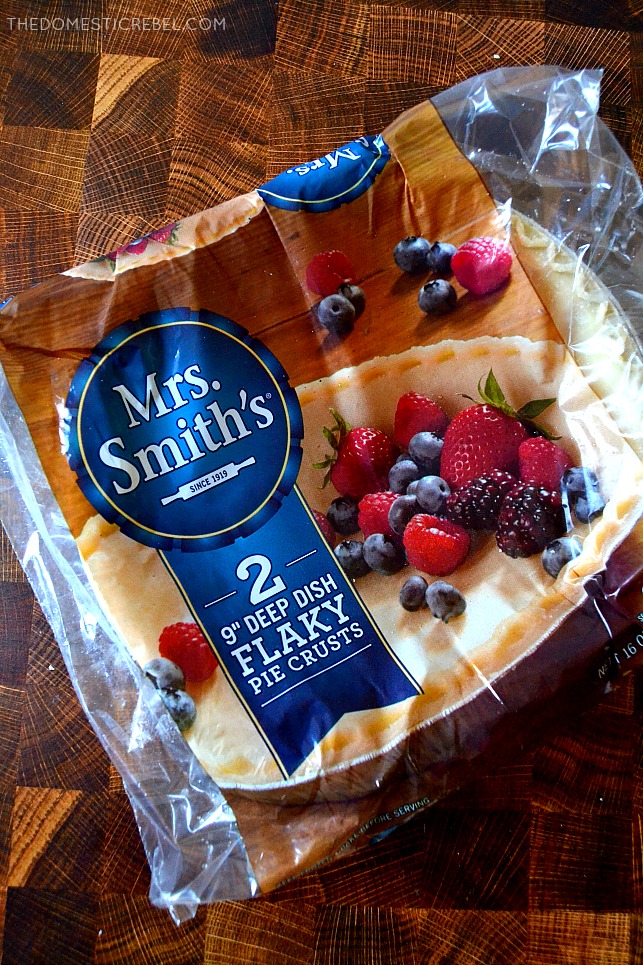 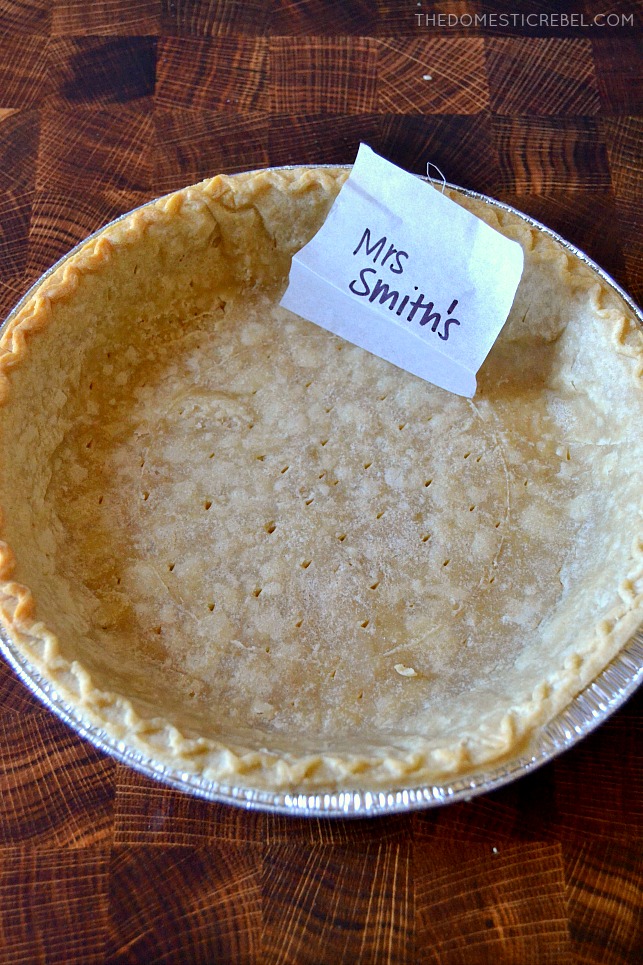 The verdict: Mrs. Smith’s was the only pie whose instructions stated that pie weights or filling the empty pie crust with an empty pie pan was necessary, in addition to pricking the crust all over. However, I found that at the 13:30 minute mark, after removing the pie weights in foil, the bottom was completely raw still, so I returned it to the oven for another 5-7 minutes. It was noticeably darker than the other crusts and patchy in parts – some pieces tasted done while others seemed slightly undercooked. It didn’t puff up in the oven or shrink too much and was one of the more attractive pie crusts. Two of the testers found Mrs. Smith’s to be extremely gritty and sandy in texture and found the flavor to be weird – almost earthy. Two other testers said they grew up with Mrs. Smith’s brand and enjoyed its neutral, almost crackery flavor. 3.5/10 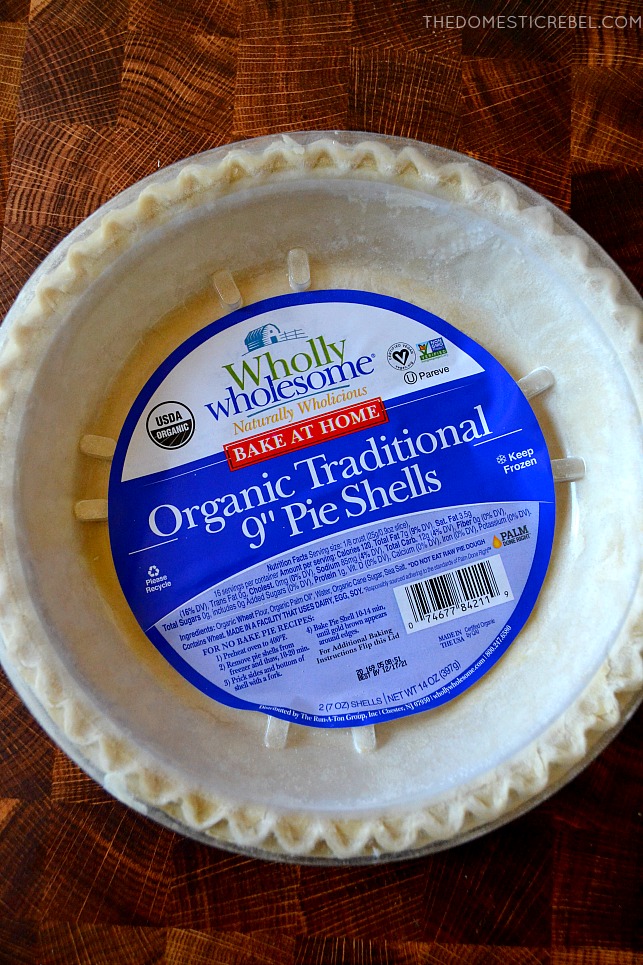 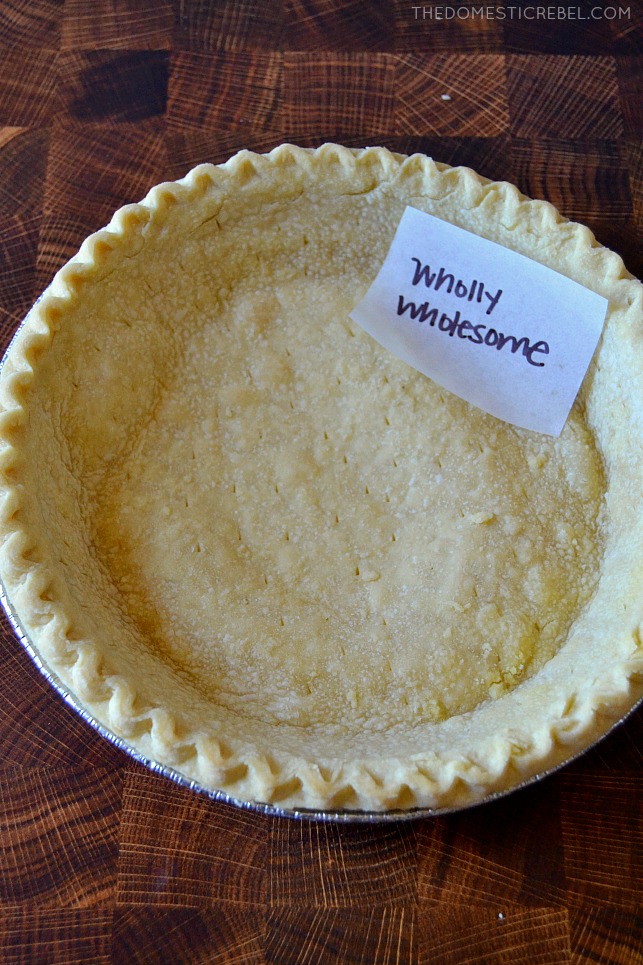 Directions: Preheat oven to 400 degrees F. Thaw briefly at room temperature. Prick all over with a knife. Bake 10-14 minutes.

The verdict: This pie crust was from Whole Foods so I expected it to rate higher. It was one of the most attractive pie crusts unbaked and baked and barely shrunk or puffed too much; the edges stayed nicely crimped and crisp. However, our testers could not get behind the overwhelming saltiness of this pie crust. It had one of the best textures – beautifully flaky and light – but the strong saltiness combined with its weirdly strong aftertaste left testers asking for water. I think this pie would work best with a very sweet filling – perhaps pecan to balance out its corn syrup sweetness? 1/10 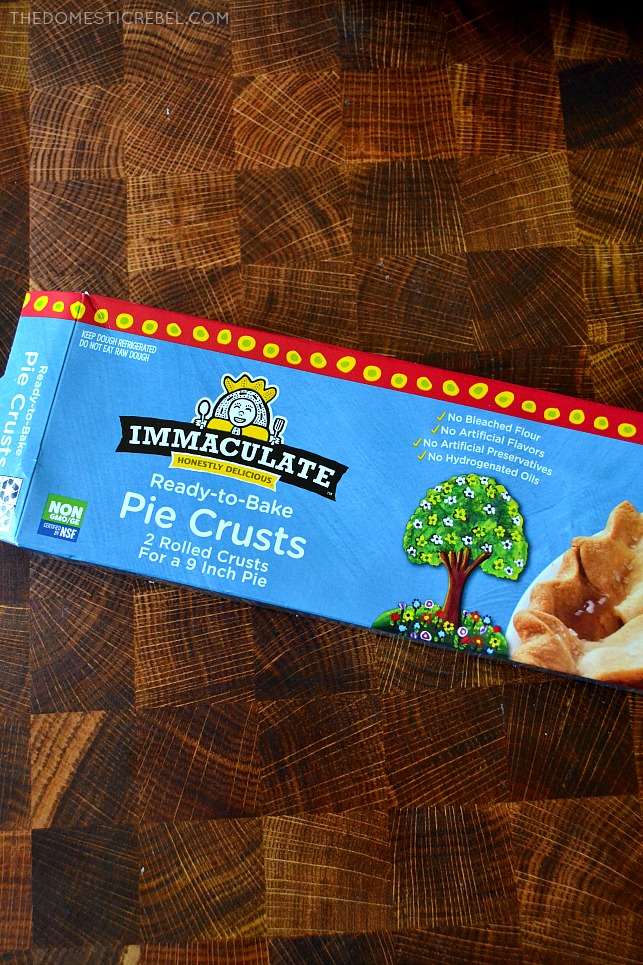 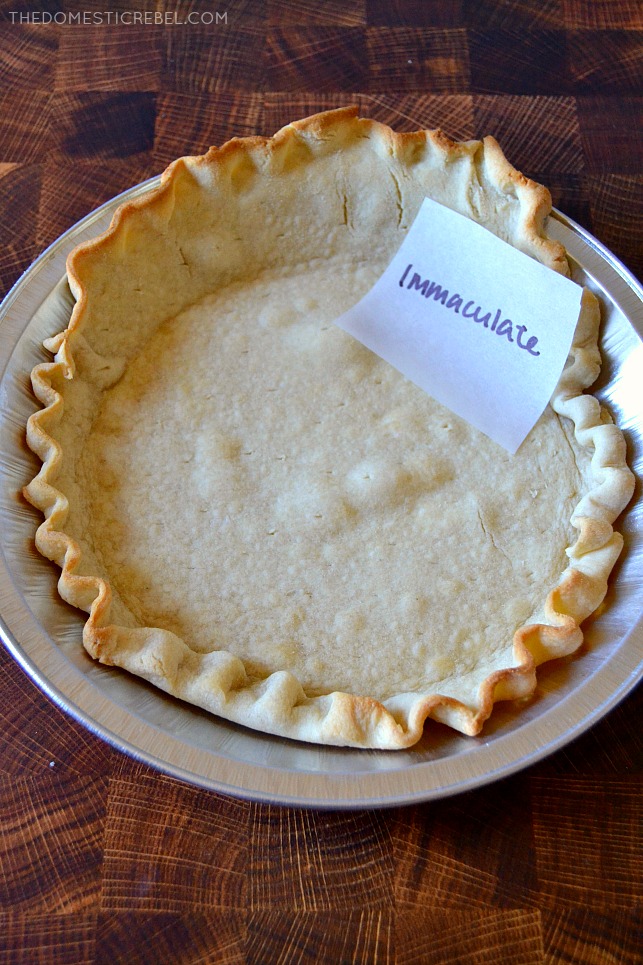 Directions: Preheat oven to 400 degrees F. Prick crust all over with knife. Bake 11-13 minutes in glass pan or 9-11 minutes in an aluminum pan. I noticed immediately when fitting the crust into the aluminum pan that it was gritty and sandy feeling and tore very easily.

The verdict: This was one of the worst pie crusts I have ever tried, and I had high hopes! I liked their line of refrigerated cookie dough in the past so I thought this would be a shoo-in. Not the case. First, it baked extremely poorly, shrinking significantly and inconsistently (some sides were taller, others were almost to the bottom crust). It had a horrible flavor – it was salty but there was something else that tasted extremely OFF – kind of sour. One tester said it reminded them of sourdough bread, almost like a fermented sour/bready flavor. One of the testers, a sweet gal who is always positive, said “what the fuck” and asked to spit it into my trashcan. Another said “someone fucked up at the factory.” I don’t know if this was a bad batch or what, but this was seriously vile. I would not recommend in any capacity! 0/10 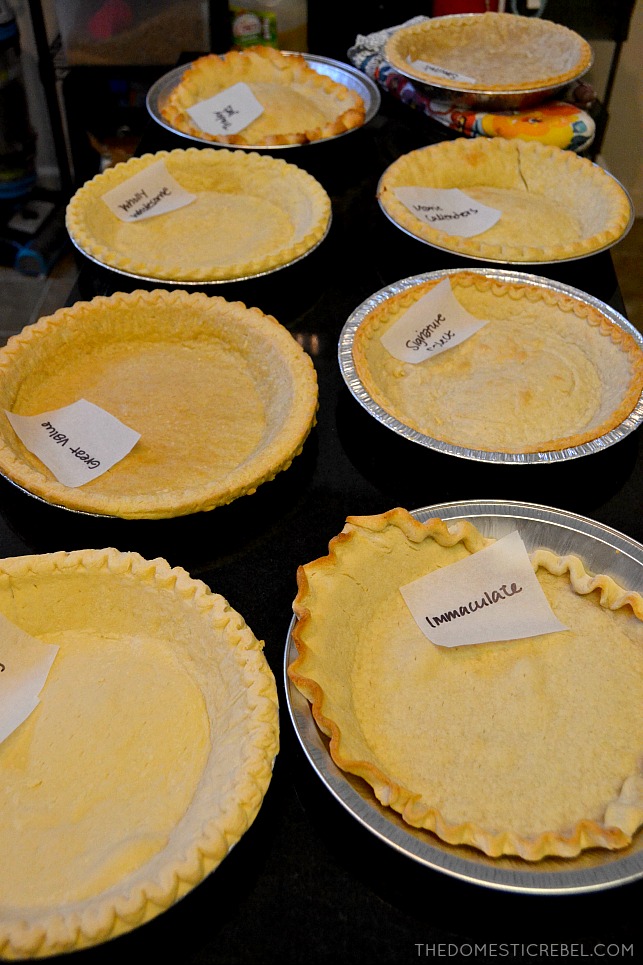 Well, that’s that! I hope you found this post helpful so you can bake with success this holiday season!