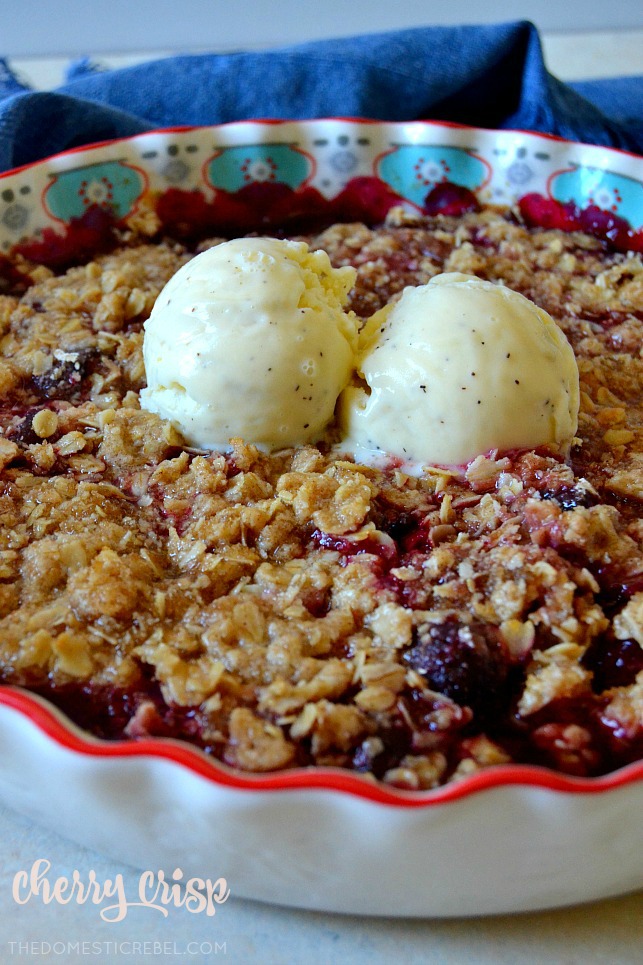 This post is sponsored by Northwest Cherry Growers. All opinions are 100% my own.

I can’t believe this year is almost coming to a close.

Where has the time gone? Seriously. I feel like I blinked and it’s nearing September. That yesterday was my birthday (my birthday is in January). That in a few weeks, there will be Christmas stuff out (don’t even get me started on Hobby Lobby; Christmas has been up and out since July).

Like this year, cherry season is also fleeting, so when Northwest Cherry Growers reached out to me to send me 22 pounds (!!!) of fresh Washington State cherries, I was SO happy to accept! I knew I couldn’t use all the 22 pounds, so I gave most of them away to neighbors, family and friends who were thrilled to receive such a bounty of fresh-picked cherries. However, I held a couple pounds back to make sure I had enough cherries to make this Easy Cherry Crisp!

I was debating what to do with my abundance of cherries and crisps and cobblers were juggling in my head. But then I remember last year I made a Cherry Cobbler Pie with my batch of cherries and the fate was sealed: Cherry Crisp it was!

My favorite part about this crisp is that it truly is a cinch to make. The hardest part, which isn’t hard but more labor intensive, is pitting all the cherries. You obviously want to do this unless your goal is to break the teeth of those you serve it to 🙂 I found this cherry pitter from Sur La Table last year and love it. It pits 6 cherries at a time, is dishwasher safe and totally easy to assemble. Plus, you can pit 6x the amount of cherries in half of the time it takes with a handheld pitter or the old straw into a Coke bottle trick. 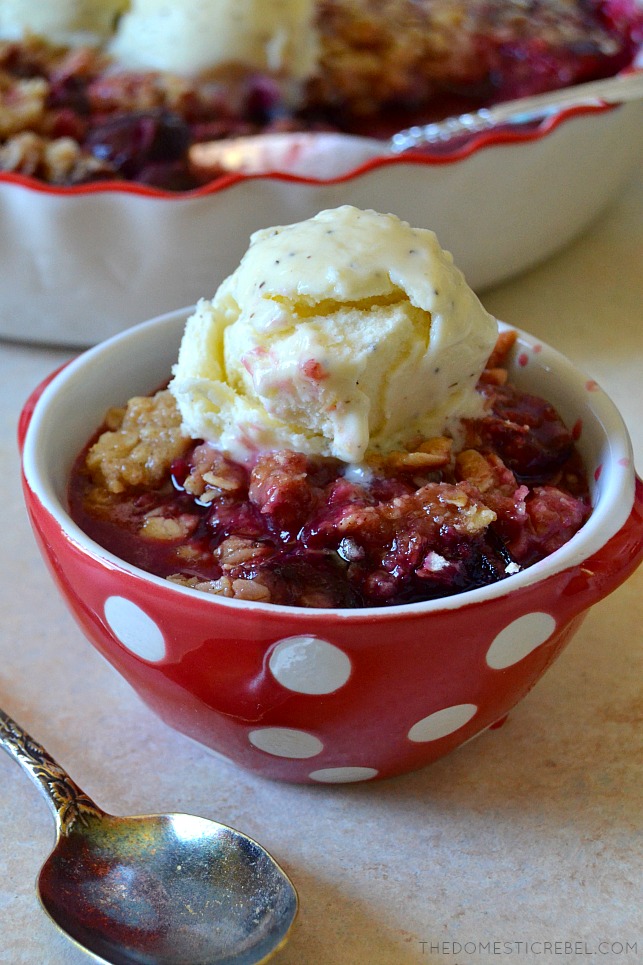 You’ll simply combine the pitted cherries and some sugar, cornstarch, a little lemon juice and a splash of vanilla extract and pour them into a dish – I used a 9″ round pie plate and found it fit perfectly. Then you’ll make your oat topping, which consists of oats, brown sugar, cinnamon, flour and cubed butter you’ll work together into pea-sized crumbs. Sprinkle the crisp topping over the cherries and bake the beauty until it’s golden brown and bubbly. 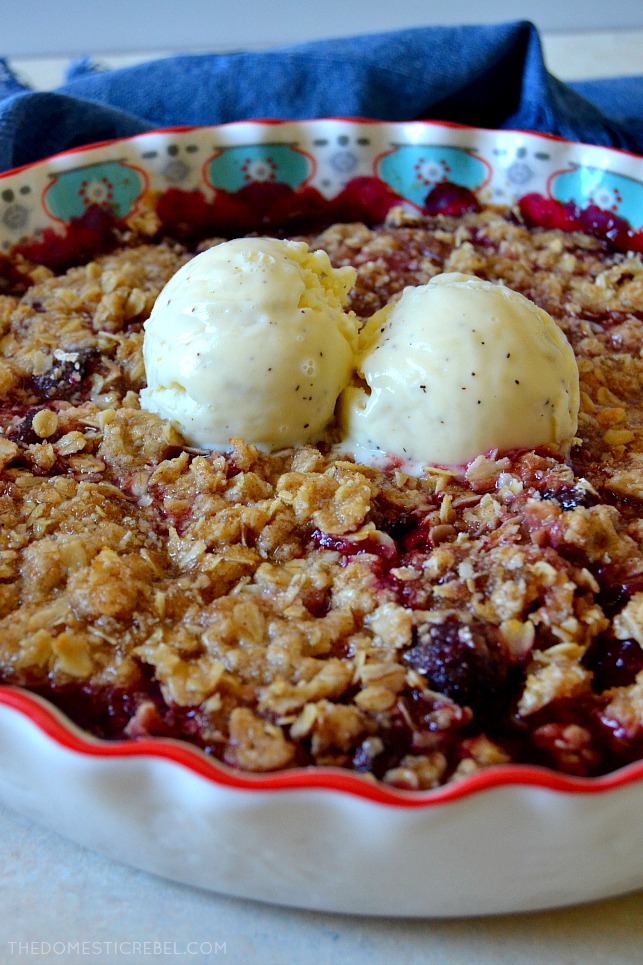 Of course, serving it a la mode is NOT optional! 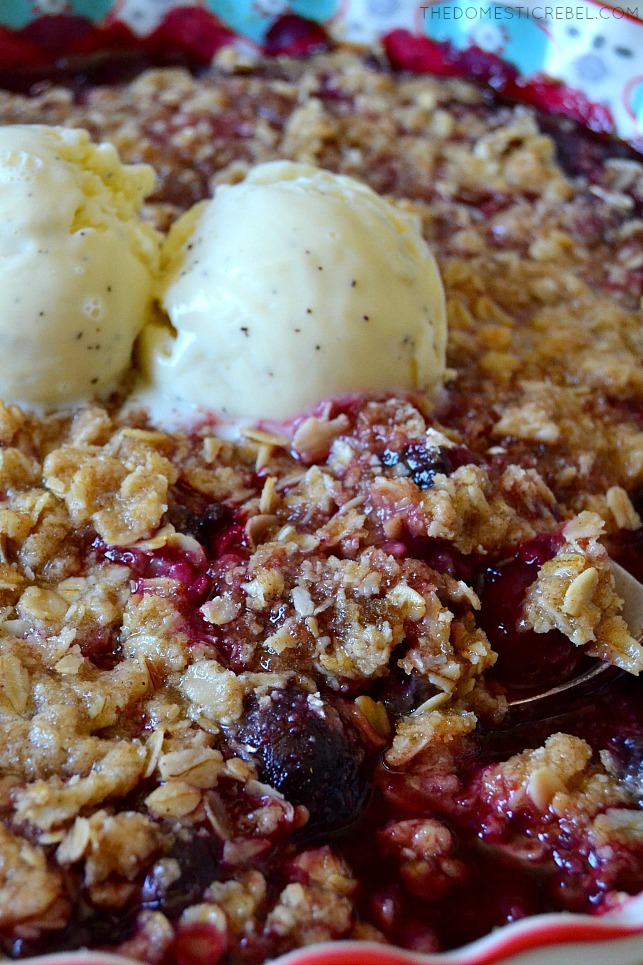 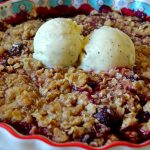 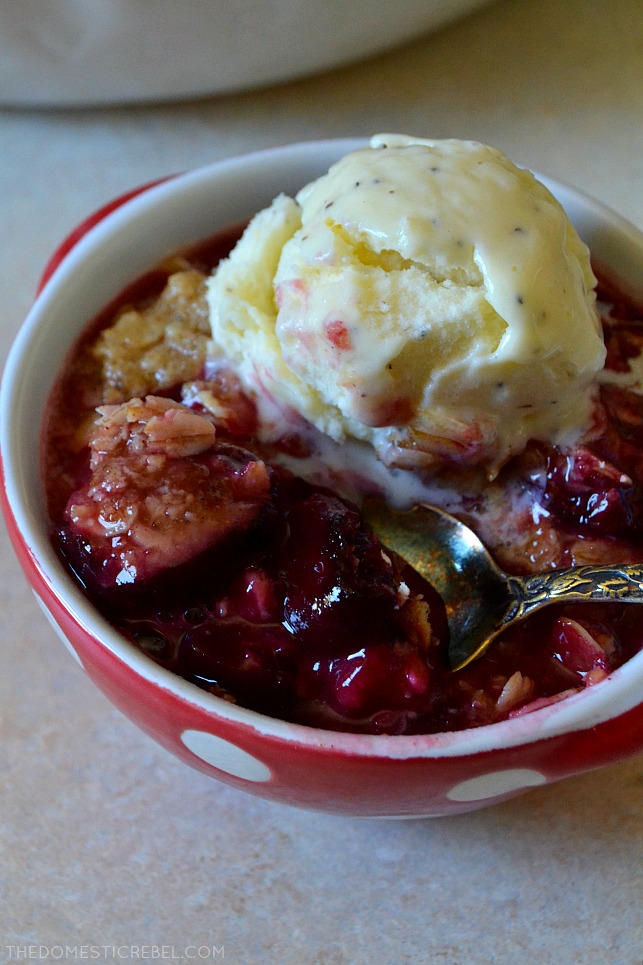 Juicy, sweet, fresh & ripe Washington cherries in a buttery, oaty crisp. Not much better than that!