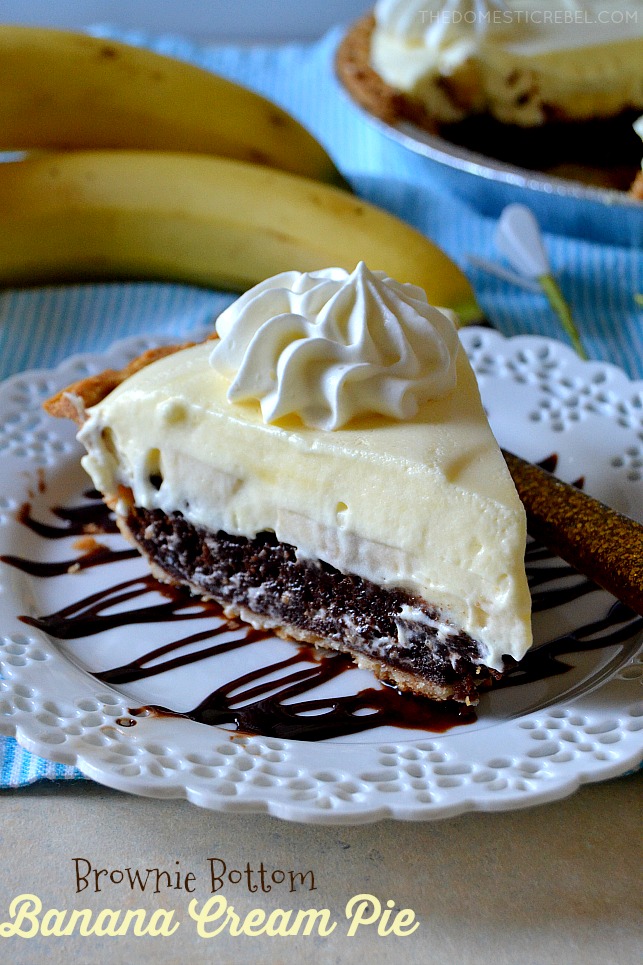 This Brownie Bottom Banana Cream Pie takes a classic to the next level! Complete with a buttery, flaky crust, a fudgy brownie bottom and a cool and creamy banana cream pie filling!

So January is my birthday month, and yes, I am one of those people who celebrates all month long.

While everyone else is all about detoxing during January, I am over here stuffing my face with all of my favorites. Detox? Does that mean I only go one day without eating a piece of cake after dinner?

But this month I decided I wanted to showcase all of my favorite foods, which I hope are some of your favorites, too. So the main themes of the food I’m posting this month are sprinkles, and banana. I am obsessed with them both! I just get so giddy for anything banana-flavored, or desserts smothered in lots of rainbow sprinkles.

So to kick it off, I’m starting with banana and this outrageous pie.

As a kid, we had a Marie Calendar’s restaurant nearby where we’d go for special celebrations. They make all their pies from scratch, and after dinner we were allowed to order a single slice of our choosing. It was always hard for me to pick between apple and banana cream, but banana cream usually always won. There was something about that thick and creamy banana custard filling, slices of fresh banana and the flakiest butter crust that won me over time and time again. (Although no shade to their apple pie – it’s also fantastic!)

It was probably that early memory of ordering my own huge slice of banana cream pie that sealed the deal for my love of banana desserts. And this pie is an homage to that early love for all things banana!

This pie is similar to one in my second book, Two in One Desserts, but I had to share it here because it’s too dang delicious! 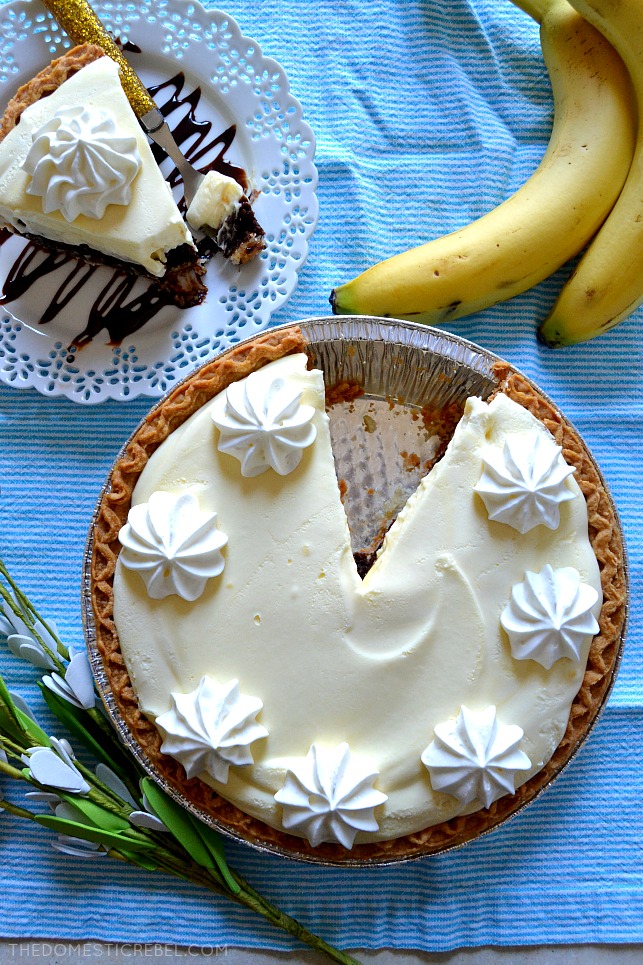 It starts with a flaky pastry crust – for this you’re going to want a deep-dish pie crust since there’s a lot going into that crust! If you can’t find deep-dish crusts, just keep in mind that you’ll have some extra filling (which is perfect to eat on the side!).

Fill the pie crust with some fudge brownie batter and bake it until the brownie is set and the crust is golden brown. I found the perfect measurement of brownie batter comes from those little pouches of brownie mix that fit in an 8×8 pan. I usually find them at the Dollar Store, to be honest – but in a pinch, you can just use some from a standard box and you’ll just have some brownie mix leftover. The quantity of brownie batter you get from a regular box is too much for the pie, so you only want to use about 2 cups of the powdered mix. 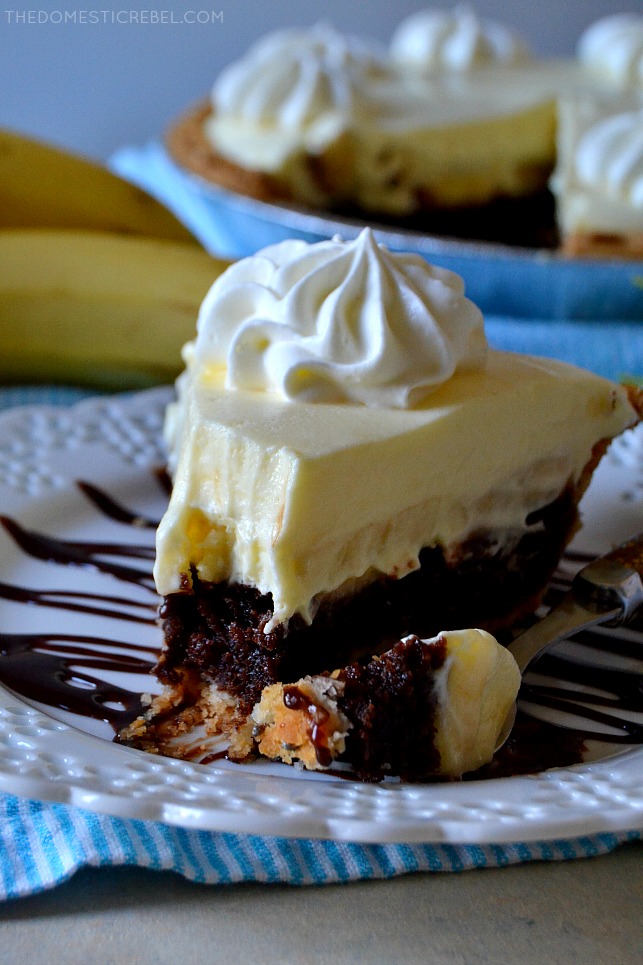 Once it bakes up, let it cool and make your banana cream pie filling: it’s just milk, banana pudding mix, and some whipped topping. You’ll also want to slice a big banana into coins to arrange over the brownie layer. Then whip up the filling mixture and pour it over the brownie and bananas. This is where the deep-dish crust comes in handy since there’s so many layers to this pie! If you have any leftover filling, just eat it as a little treat while you wait for the pie to set in the fridge – this should take about 4-6 hours, because you want that filling to set up nicely and not be too runny. 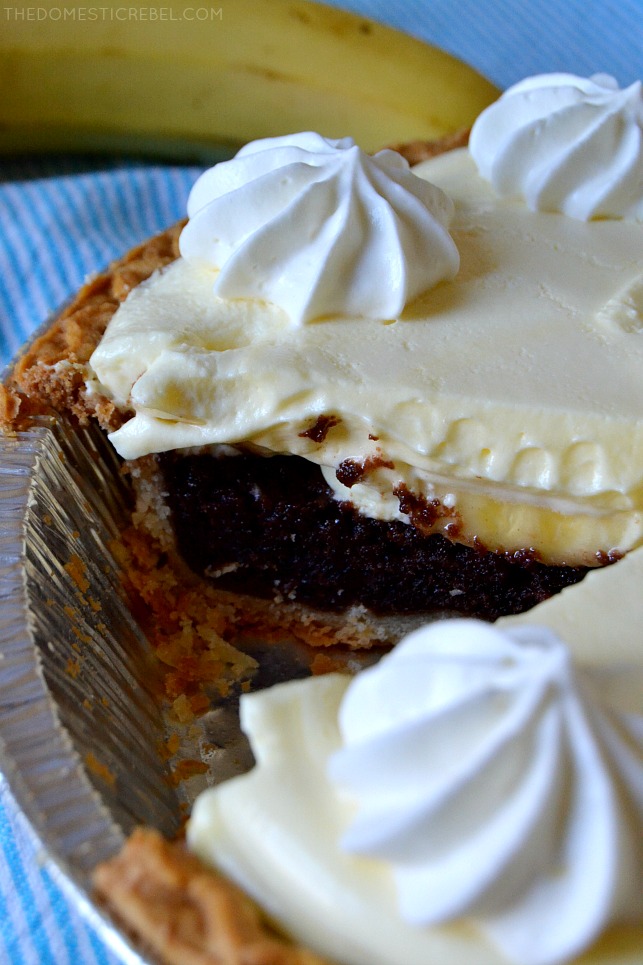 After that, it’s fair game to eat as much as you want (which, be forewarned, will be all of it!). A fudgy, gooey chocolate brownie, a flaky, buttery pie crust and a cool and creamy banana pudding filling – this pie has everything I could have dreamed of in one unique dessert mashup! 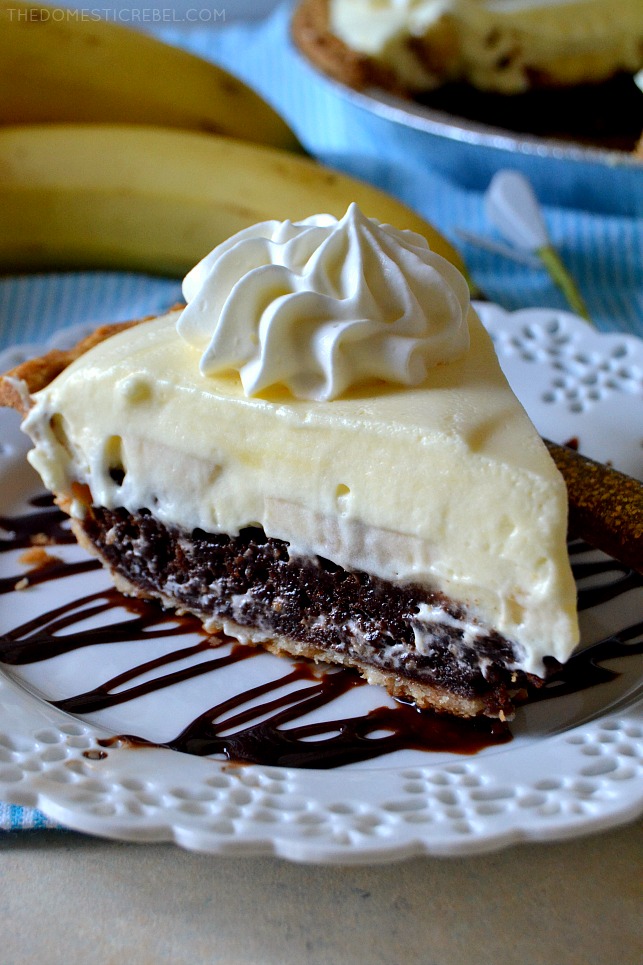 *adapted from my book, Two in One Desserts 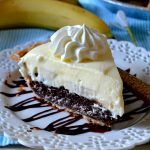 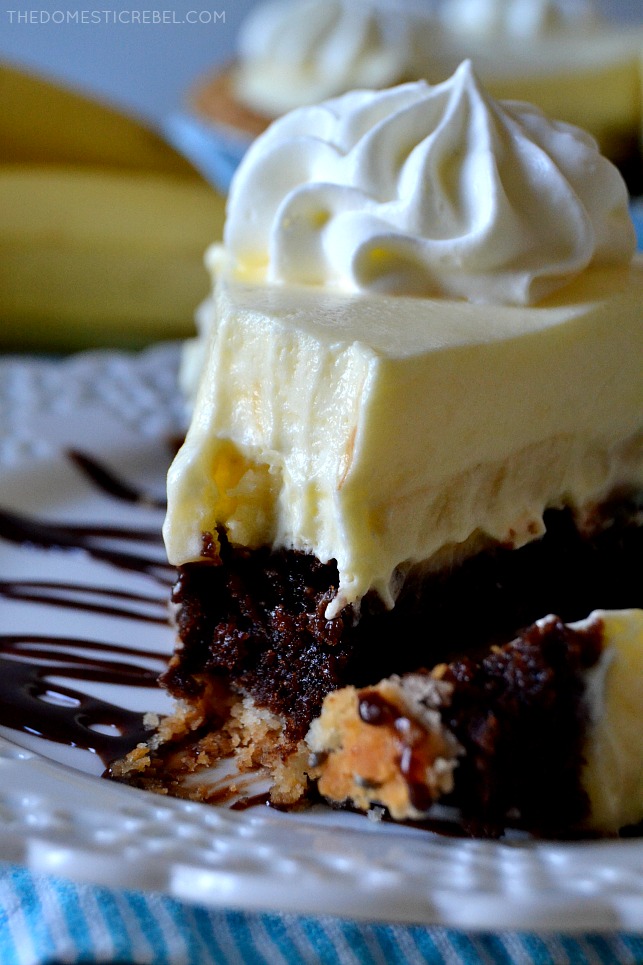 I hope you guys love this pie as much as I do! It is so unique and totally divine!

Disclaimer: this post contains an Amazon affiliate link. If a purchase is made using my link, I’ll receive a commission at no additional cost to you. Thanks for supporting my blog!