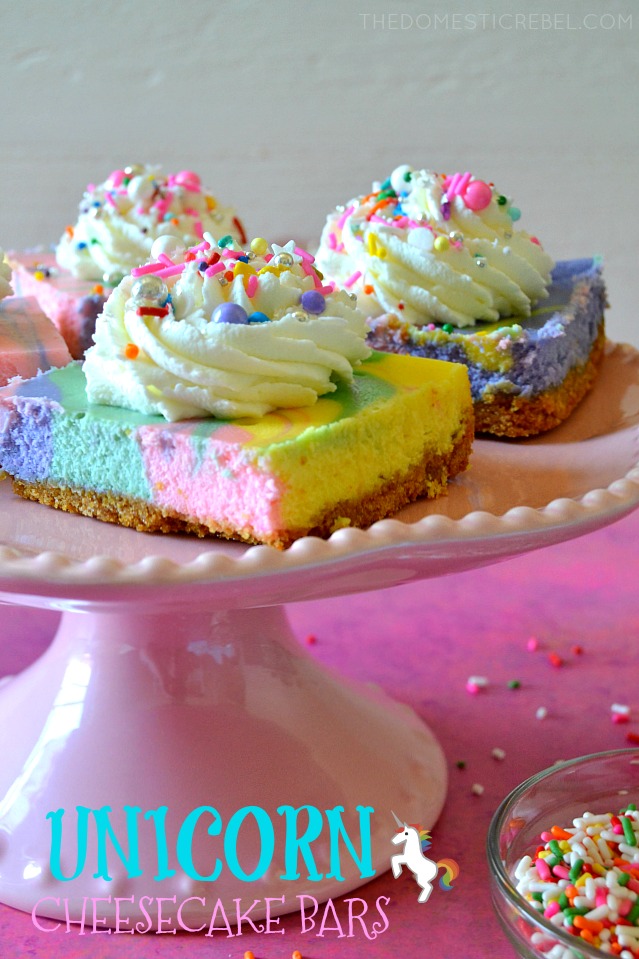 How fun are these Unicorn Cheesecake Bars!? Perfect for summertime, the latest unicorn craze, birthday parties, or for the unique person in your life!

Okay, so I’m totally (officially) hopping on the unicorn bandwagon with these cheesecake bars. Don’t blame me, blame society.

I totally understand the unicorn craze. It all started (for me) back in the 90’s when I was obsessed with procuring EVERY LAST PIECE OF LISA FRANK PARAPHERNALIA I could get my grubby child hands on. The colors! The magic! The stars! The fairies! The unicorns! I was a girl possessed.

The 90s were kind of the off-set of the unicorn craze, don’t you think? I mean, we had GEL BODY GLITTER, Y’ALL. That is no accident. Gel body glitter was laying the groundwork for a unicorn craze in 20 years. THANK YOU, BONNE BELL.

Plus, who doesn’t love stuff that’s glittery and magical and rainbow? People who hate life don’t like that stuff, so miserable people, this recipe isn’t for you. Also, people who don’t like food coloring probably won’t like these. MORE FOR ME.

But for everyone else, these bars are actually super easy to make and only look intimidating. I guarantee once you make them, you’ll be the star of every party you take them to. I also think when you show up to said parties with Unicorn Cheesecake Bars that you have a boombox on one shoulder and butterfly clips in your hair (yes, even you dudes). Also, I require that the boombox be playing “Genie in a Bottle” because THE 1990s WAS THE BEST DECADE. NO DISCUSSION.

Now, who wants to make some unicorn magic? 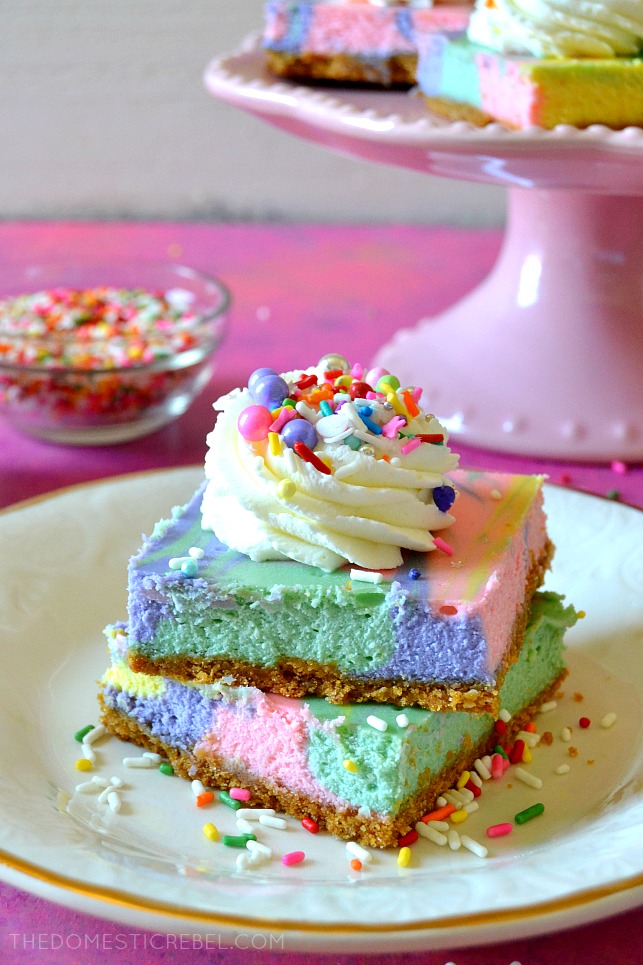 This recipe starts with a usual cheesecake recipe: graham cracker crust, creamy vanilla cheesecake. Toss together some graham cracker crumbs, a little suga’, and some butter until moistened. Press it into a foil-lined 9×13″ rectangular pan and bake it for a tad. While you bake it, whip up your cheesecake. 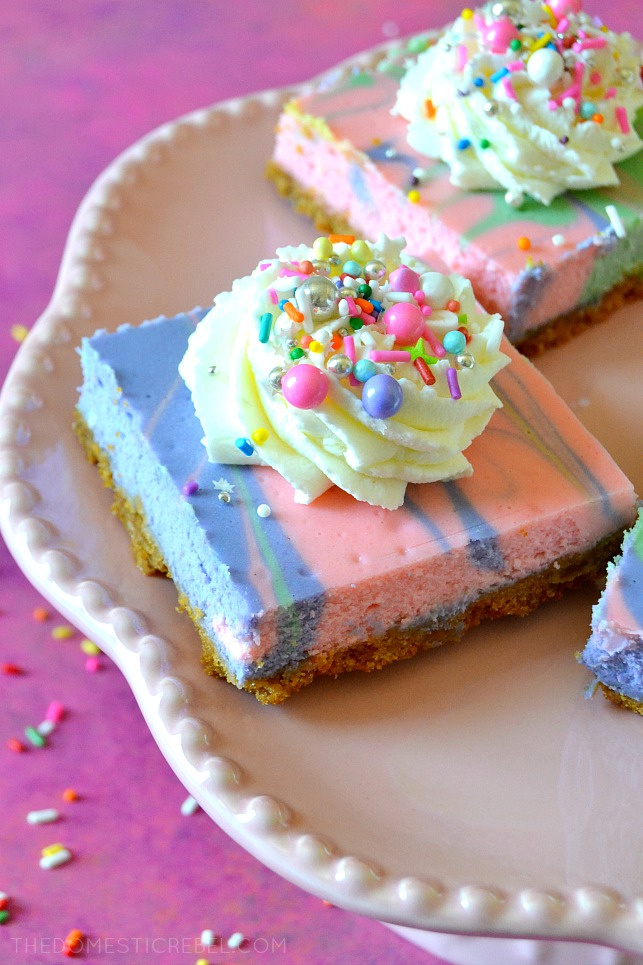 The cheesecake is just cream cheese, sugar, eggs, vanilla, and sour cream. The sour cream is mandatory and no, there’s no substitution for greatness. I mean, I guess you could use Greek yogurt if you’re trying to be healthy, but I don’t think unicorns eat healthfully. They eat confetti, which last time I checked probably has the same nutritional value as these bars. Just sayin’.

Once the cheesecake is whipped up, you’ll divide it among 4 bowls. Tint each bowl a different color. I went with pastels because they seem the most unicorn-ish to me, but bright colors would be fab! It’s a glorified horse; I don’t think it cares about your color choices. 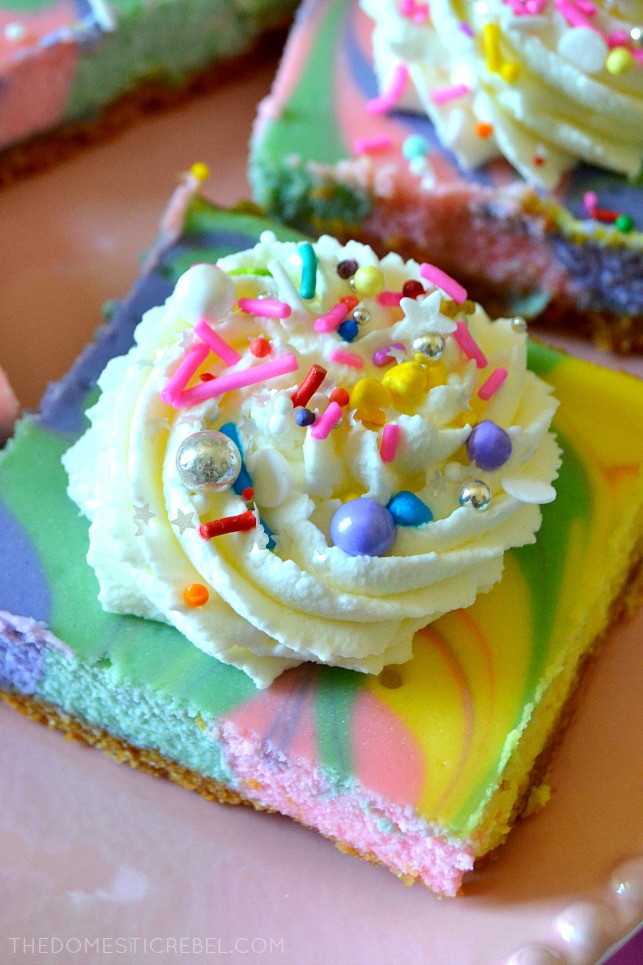 Then plop (yes, that is the technical term) the colors at random on top of the crust. I alternated the colors so I didn’t have one giant blob of pink somewhere; I wanted everything to be scattered which gives it more of that rainbow marbled look. Once you’ve covered the crust with cheesecake batter, gently swirl the colors with a butter knife. Don’t swirl too much, though, as it may begin to muddy the colors some (this is especially true if you use brighter colors like orange and blue).

Bake it up and you get thisssssss. 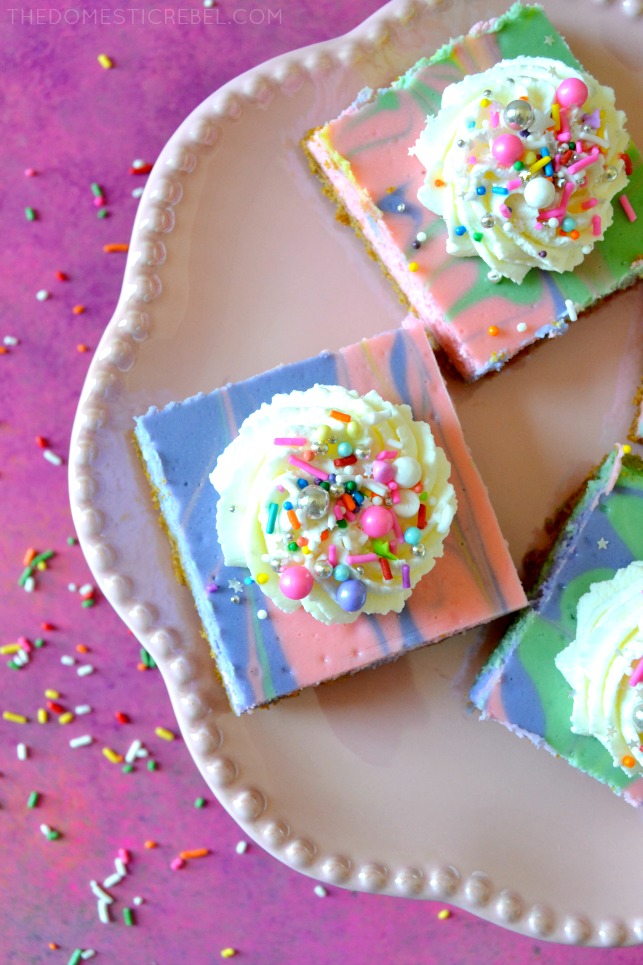 Shine on, you crazy unicorns! 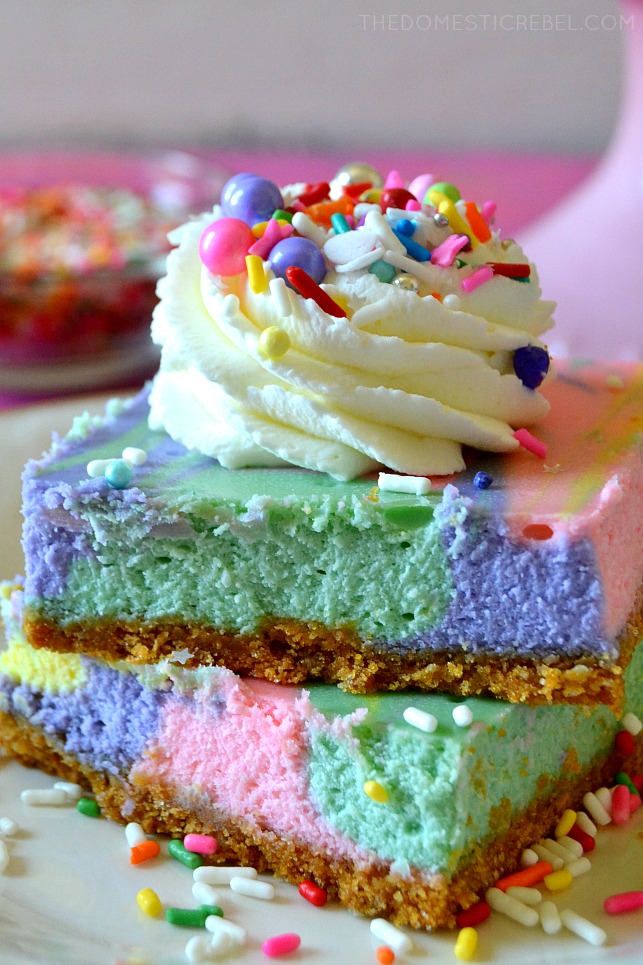 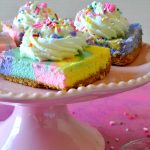