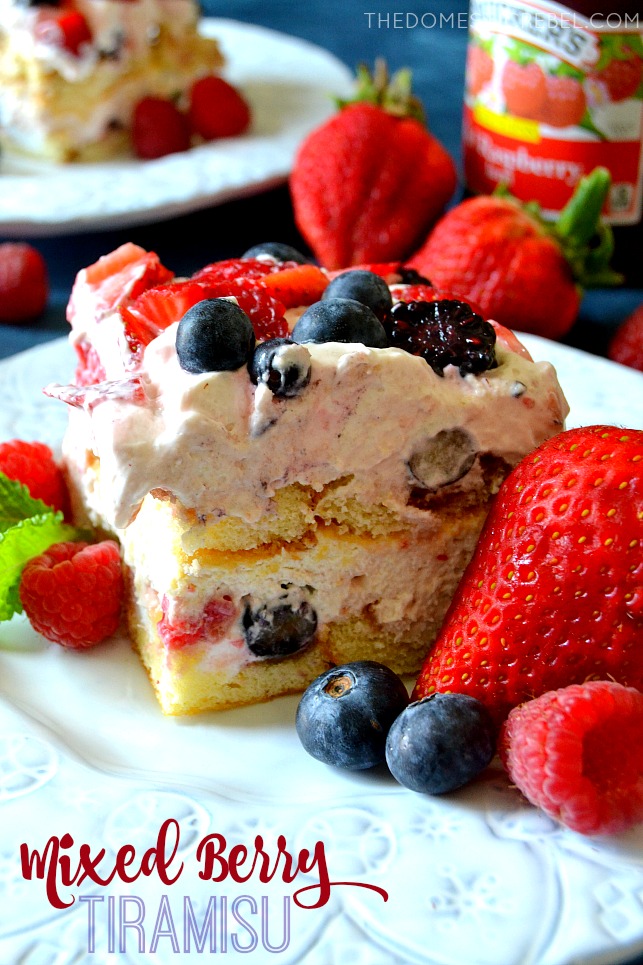 This Mixed Berry Tiramisu is bursting with four kinds of berries in a light and fluffy take on tiramisu!

If you could afford one of the following, what would you choose?

Personally, of the following I’d want a chef, because despite this blog, I am incredibly lazy with cooking. I love baking, but since I live alone, I don’t really need to be whipping up four-course meals on the reg. So that usually means I spend most nights eating boxed mac & cheese or frozen chicken pot pies. (I also eat those because I am poor, so there’s that factor).

I think a chef would force me to eat healthier, because I sure as hell am not paying a chef to make me Kraft macaroni and cheese for dinner. I would want my chef to make me things I always see healthy people eating, like salmon or hemp seeds, because those sound important and healthy.

You may be like, “salmon? That’s not that big of a deal.” But it is because I have a long history with fish and a track record of fainting in their presence. So making salmon is a big deal because I have never successfully made salmon without falling on my face. I once tried to make salmon to impress a boyfriend but I ended up fainting in my kitchen instead. We dated for almost 2 years, so I guess it wasn’t a total bust.

And the other time was when we went to a fish hatchery in third grade, because for some reason those places exist. My class went to look at salmon or trout or who the hell knows, a fish is a fish is a fish, right? At least to me. It’s not like I need to identify fish in a police line-up so I don’t really care. The point WAS, we were at a place surrounded by fish. You could feed fish, you could pet fish, you could see inside of fish, which is what happened to me.

It was a sweltering day and we went inside with my friend and our chaperone where a woman was doing a demonstration about what a fish looks like on the inside. The combination of the smell and the innards and the heat was a lethal combination and I ended up fainting right then and there. When I came to, I was sitting on a step outside still surrounded by fish which someone should have realized that was the initial problem and gotten me the hell out of there. But NO. I had to sit in the heat surrounded by dumbass fish for the next several hours.

To this day I can eat fish in restaurants and such, probably because they have adequate ventilation and I don’t have to actually touch said fish. But making it at home? Unless it’s covered in breading and called a “stick” I can’t prepare it. So yes, having a chef would be awesome because he/she could prepare me fish, which I know are a lot healthier than neon orange noodles with powdered cheese.

And then I could make my chef this Mixed Berry Tiramisu for dessert as a thank you for manhandling salmon for me. Xoxo.

To be honest, Twinkies are a jillion times better than ladyfingers because I am not a cannibal and also because ladyfingers are HELLA expensive in my neighborhood. You get like 12 for $6 and I am already eating frozen pot pies for dinner so I’m not about to blow my budget on some stale cookies. If you prefer ladyfingers, you may absolutely use them in this recipe. You clearly have more money than I do. Congrats. 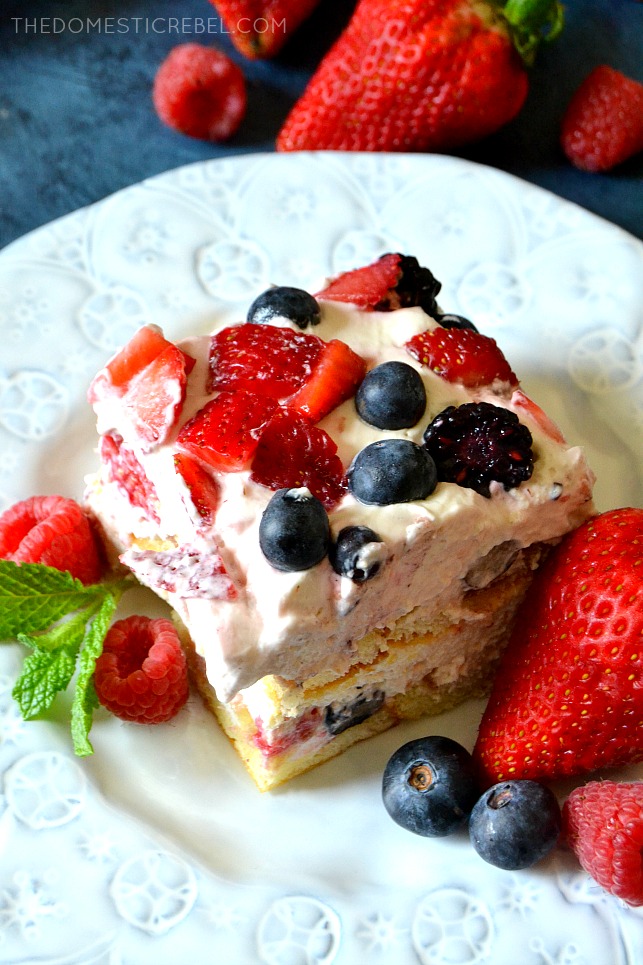 OTHERWISE, use the Twinkies, dude. They are fluffier, provide a wonderful vanilla deliciousness and their cream filling is surprisingly perfect in this tiramisu. It’s drizzled with Chambord and topped with a raspberry jam/cream cheese/whipped cream mixture that’s SO fabulous. Topped with a boatload of fresh berries, it’s the perfect springtime treat! 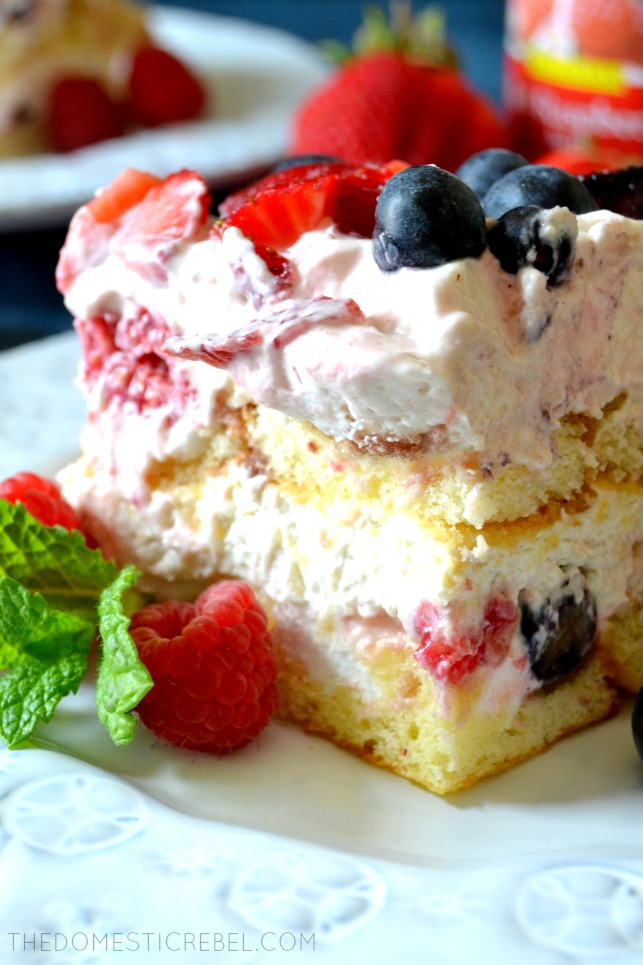 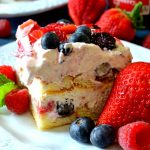 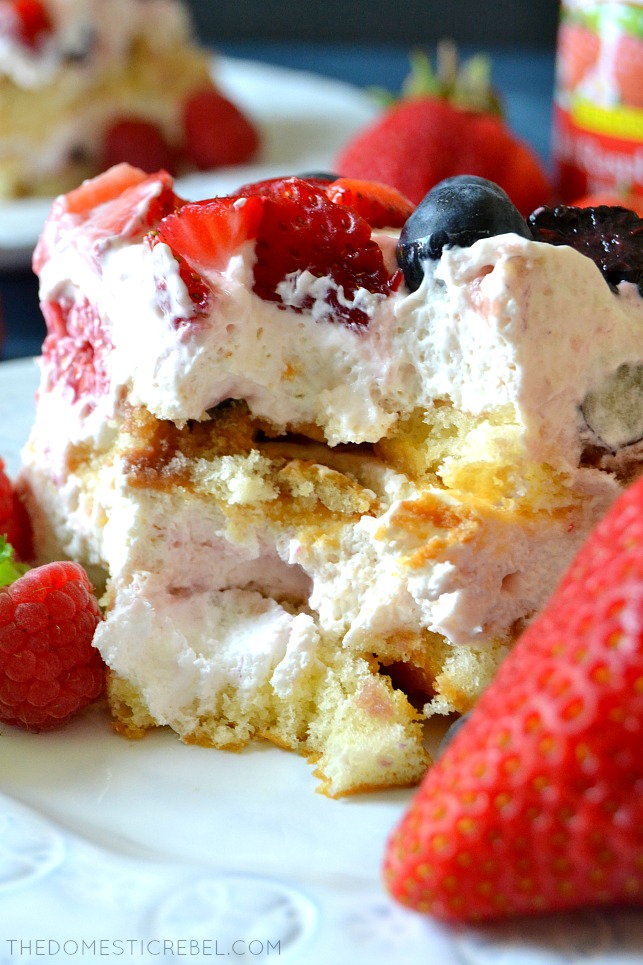 The raspberry liqueur-soaked Twinkies topped with that light & fluffy raspberry whipped cream cheese mixture is amazing on its own… but throw in 4 cups of assorted fresh berries and you get the most outrageous and delicious tiramisu ever!