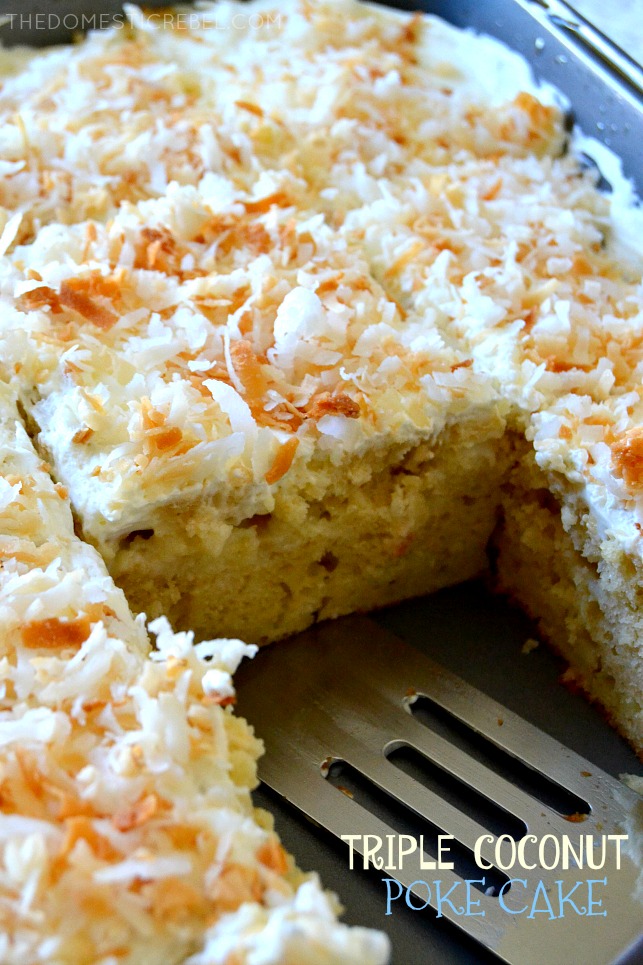 Attention all coconut lovers! This Triple Coconut Poke Cake will be your new go-to dessert for coconut cravings! Moist, fluffy cake soaked in cream of coconut and topped with a light coconut whipped cream and toasted coconut.

Can we talk a little about cat-calling for a sec?

I promise I won’t go on a feminist tirade about the mental and emotional ramifications of cat-calling or anything – I’ll let you PM me if you want that. BUT. Cat-calling is still a thing?

I didn’t think so, but that’s probably because no guy looks at me walking down the street. No guys look at me period. I think it’s a combination of me perfecting my RBF, the fact that I never wear makeup anymore so I perpetually look haggard and tired in one fell swoop and because I don’t even care anymore about how I dress, which usually means I’m wearing black leggings, a black shirt, and black boots every. single. day.

(Side note: those people who say “leggings aren’t pants” clearly has never been a plus-size woman, mmkay? The whole denim waistband situation that cuts off circulation to my gut is not how I want to spend my day, so leggings it is.)

But anyway, I was walking down the street in the little downtown area of my city when this older dude – maybe 60s? – is approaching me on a reclining bike. He’s wearing neon everything – from his visor to his shoes – and kind of looks like Sammy Hagar if he was a middle class person with a penchant for neon colors.

Anyway, Sammy – as he’s approaching me – shouts as loud as possible, “HEY, GIRL! LOOKIN’ GOOD! I LIKE A GIRL THAT’S HEALTHY!” as he rode by on his contraption. And it was then that I stopped dead in my tracks, looked down at my rotund figure – all 200+ pounds of me – and decided Sammy was clearly on drugs and where can I get the drugs that make me look healthy because I want some.

So then I came home and realized Sammy has been the only dude to hit on me in the last several YEARS. I’m not kidding. Well, okay, I’m lying. There was the elderly man in the antique store who called me “delicious” but I choose to forget about that because frankly, it gives me night terrors.

And then I forgot about the whole situation and ate a piece of cake. As healthy women do.

This Triple Coconut Poke Cake is what coconut dreams are made of. The cake itself is a cinch – whip it up with some coconut cream pudding mix and coconut milk in the batter for a subtle, coconutty flavor. Once it’s baked, poke holes all over the top and get out your aggressions, then slather on a mixture of cream of coconut (more on that in a sec) and condensed milk. Frost that pretty with some fresh coconut whipped cream and top with toasted coconut for good measure. Done & done. 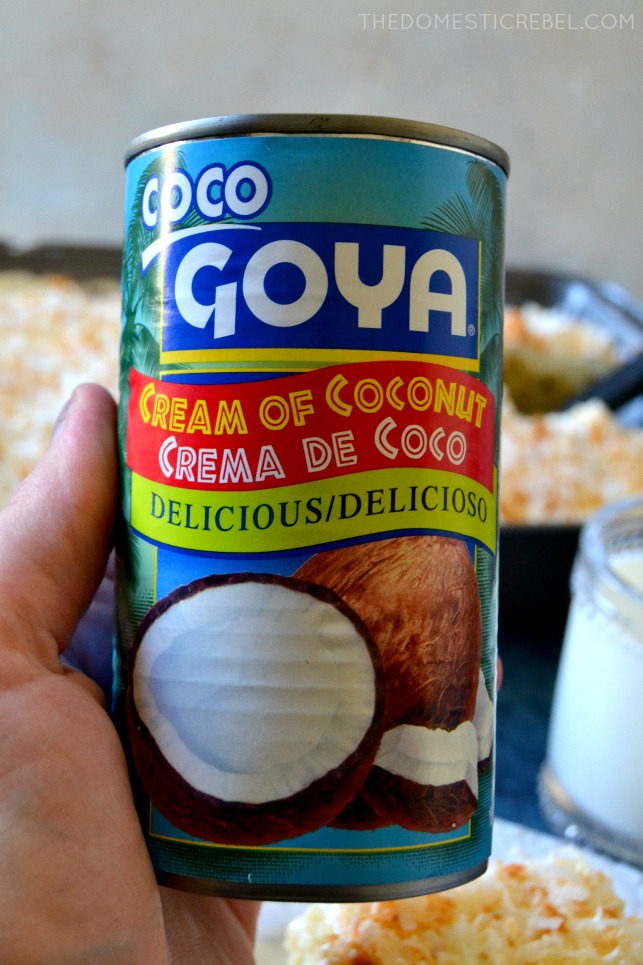 *So about that cream of coconut. It’s not coconut milk, y’all. It’s CREAM of COCONUT. There is a difference! Coconut milk is quite runny, like standard cow’s milk. Cream of Coconut is thick, almost like a paste. If we’re being honest, you could very well use coconut milk in the filling, but it would be runnier and not as much of a concentrated coconut flavor. Cream of Coconut tends to be stronger and thicker, almost resulting in a pudding-like filling texture in the cake which is so lovely! (Also – you can find it on the international/Asian foods aisle in most grocery stores. Just check the labels as many stores readily stock more coconut milk brands than cream of coconut brands). 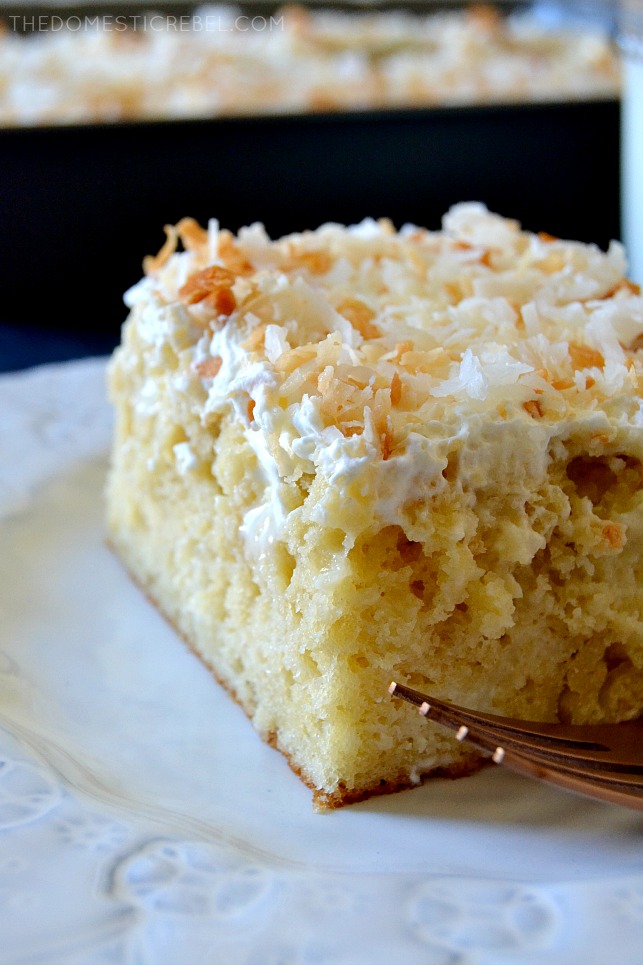 Whatever you do, make this cake! And then listen to some Sammy Hagar, I suppose. 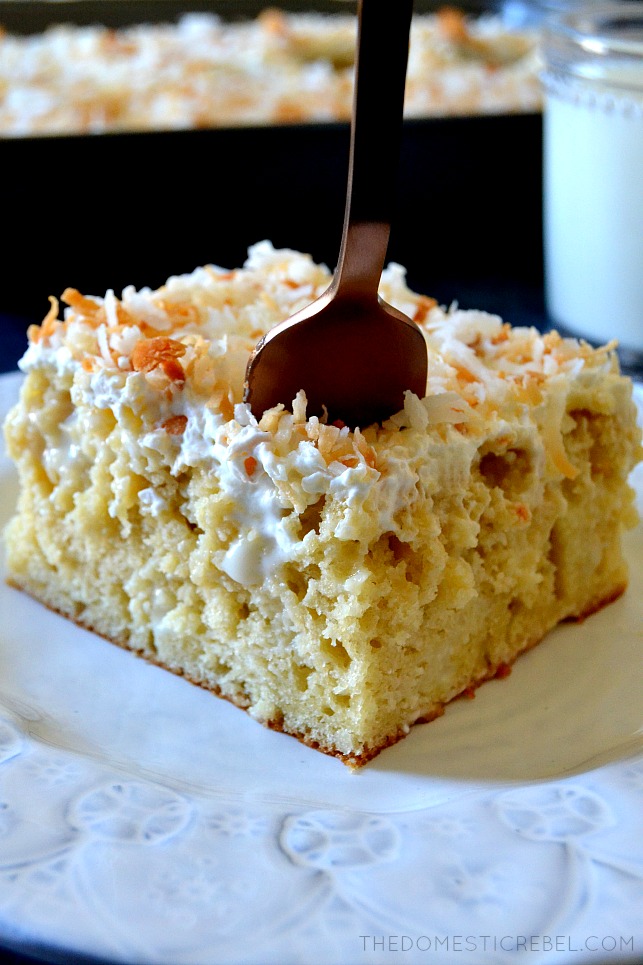 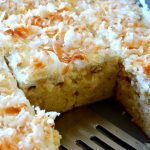 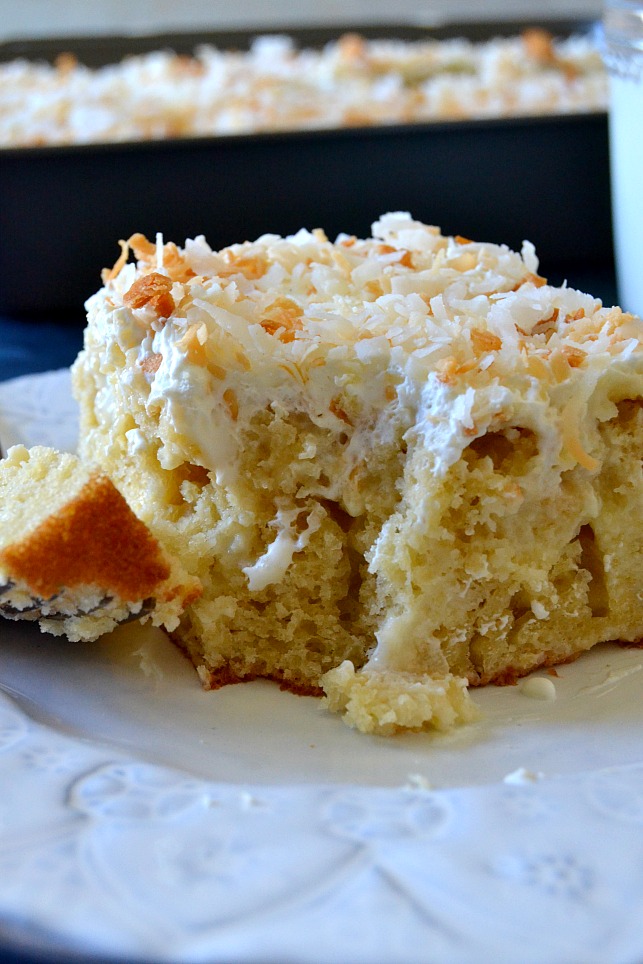 Moist, fluffy, creamy and irresistibly coconutty! Any coconut lover will flip for this cake!