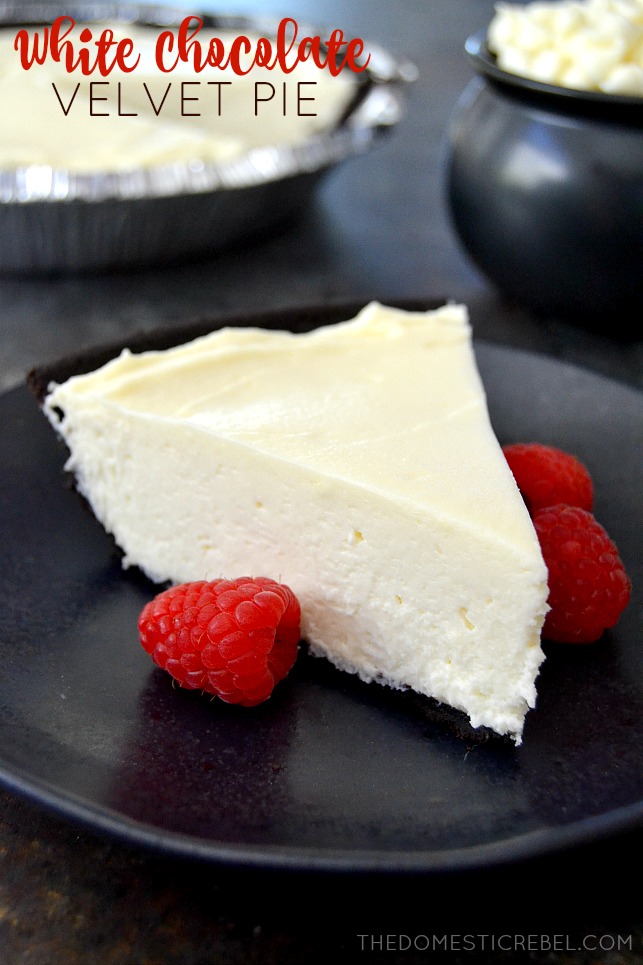 So, confession: this isn’t my recipe.

Joan was a dear friend of mine in real life and in this crazy big, crazy weird world of blogging. She lit up every room she walked into. I know that’s totally cliche and like, everyone says that about their friend/mom/dog, but Joan truly was a beaming light with an effervescence about her that was so intoxicating and charming.

She had an infectious Southern accent and attitude about her that was so appealing to Miss California over here. She was as sweet as sugar and would make you feel your very best whenever you were around her, but if you done goofed, she’d be the first to call you out on it but from more of a, “I know you did this – what were you thinking?” good-natured place rather than a judgey place.

She was quick-witted, sharp-tongued and laser-focused on her blog, her business, her brand, and most importantly, her three kids, whom she just adored. Every time I was around her, she’d beam whenever she spoke of them, so proud to be their mom and champion in life.

She was a mogul when it came to her business. She had over 1 million Facebook fans and counting and was never stingy or shy about her practices, her successes, her failures… hell, she was like, the least shy person in the world. If you asked her a straight-forward question about anything: personal life, business tactics, you name it – she’d give you a no-bullshit answer. She was real, she was tough, but that’s why her business was such a screaming success – because people connected with that authenticity of the person behind the blog. People felt like they knew Joan, even if they’d only ever seen her Facebook page avatar. She had the uncanny ability to make anyone feel welcome, even if she barely knew your name.

She was 49 when she died suddenly last year of a heart attack, and would have celebrated her 50th birthday this Saturday, September 24.

I’ve kept this inside for so long – almost a year now, in October – and finally I feel like I can say it. I was mad at her before and when she died. Very mad, and confused, and saddened. And looking back now, it was so trivial, but at the time, it really upset me.

What happened was, we had attended the IFBC Food Conference in Seattle last September. She knew I was coming as we’d talked about it and she and I had even planned to do a chocolate-tasting tour through Seattle with some other blogger friends before one of the sessions started. I was so excited to see her, as I hadn’t seen her since that April.

The next night after our chocolate tour, a blogger asked me if I was going to a brand dinner that night – one Joan had orchestrated. Confused, I said no – I wasn’t invited. The blogger also looked confused and a little awkward, like oh shit, what did I just say? And I felt the same way, like oh shit, why was I not invited to this?

Turns out, almost every blogger Joan was friends with went to this dinner… except me. I was not invited. I was not invited. I repeated that phrase throughout my head the entire night as I ate dinner alone. At first, I was fuming mad – what the hell had I done to her? And then I was confused – what had happened to cause her to overlook me? I mean, I’m not exactly the shy imp in the corner – I’m easily memorable – right? And then annoyed – fine, they can all have their fun without me. It’s whatever. Seeing the photos of all my blogger friends laughing and smiling and having a helluva time at dinner – at a dinner Joan didn’t invite me to – made it even worse.

Later that night, I saw Joan and some blogger friends (ones who actually were invited to dinner, I bitterly thought to myself) in the hotel lobby. They were laughing and drinking wine and called me over. I protested and said I wanted to go to bed – it was maybe 8 or 9pm. Joan chuckled and said, “come hang out with us!” But I was too angry at her to want to hang out. Oh, now you want to hang out with me?, I thought. I went to my room that night and cried.

Joan would die not a month later.

I remember Dorothy texting me and asking me if I knew what had happened to Joan. I said I didn’t, and when she told me, I was shocked. The air literally left my lungs and I was stunned into silence. I got that weird ball of emotions stuck in the back of my throat – the one that feels like you’re regurgitating a ball of yarn. I couldn’t believe it. She was literally here one day and gone the next. How could this happen?

Unbeknownst to me, other bloggers were planning on posting a recipe dedicated to #ChocolateForJoan the week after she died. I wasn’t invited until about a day before it was set to post. I didn’t have time to post that next day.

I feverishly rushed to the store to get ingredients for my post while everyone else shared their stories of Joan and each other’s recipes on their blogs. I was making my recipe when people were mourning together. I felt so alone while everyone found solace in each other during this confusing time. Especially since I was still dealing with unresolved feelings from a month prior, feelings, I felt, that no one would understand.

My mom had told me to reach out to Joan – “maybe it was an oversight? Or maybe she only could invite a number of people? Or maybe she did forget – we’re human,” she said. “Reach out to her and let her know that it hurt your feelings and to see if you two are okay.”

I never sent that email, because Joan died before I could compose my thoughts and write it.

Were we okay? Was the last memory she had of me the one where I stormed off to my room at the hotel? Were the last feelings she felt when she thought of me tension and annoyance?

The thoughts troubled me for a long time. They only recently faded away when I became so preoccupied with my own life: writing my cookbook in 2 months, managing my blog, becoming a “new mom” to a new dog and a mom to Mannie, everything else. Until recently, when a blogger mentioned we all make one of Joan’s recipes for a post this week in tribute of her birthday. Until I realized it’s been almost a year since Joan died, almost a year since I felt these same feelings of shame, confusion, misunderstanding, disappointment… in myself. It’s a pretty big pill to swallow, but one I have to. One I have to because life goes on and I cannot remain stuck in the past, and one I have to because Joan would want me to.

It only made me realize now that she would want me to move on. Joan didn’t dwell, and she didn’t do dwelling with others. She was a, “fuck that and let’s go eat chocolate” kinda person. And now I am going to pull myself up and swallow that pill and know that for whatever reason, things happened. I don’t know why she didn’t invite me to that dinner and I don’t care. What she did know – because I told her many times before – was that I found her to be an amazing, resilient, compassionate, whip-smart inspiration of a woman and someone I looked up to. And I know now that if I had written that email to her, she would have apologized and suggested we move on because she loved me and always would and everything would be right again.

So here we are, present day. I know Joan would be thrilled that her friends were making her recipes. And I was thrilled to make it. After all, this recipe came from a dessert genius and a woman who knew her chocolate, so anything less than perfect wouldn’t have made the cut. 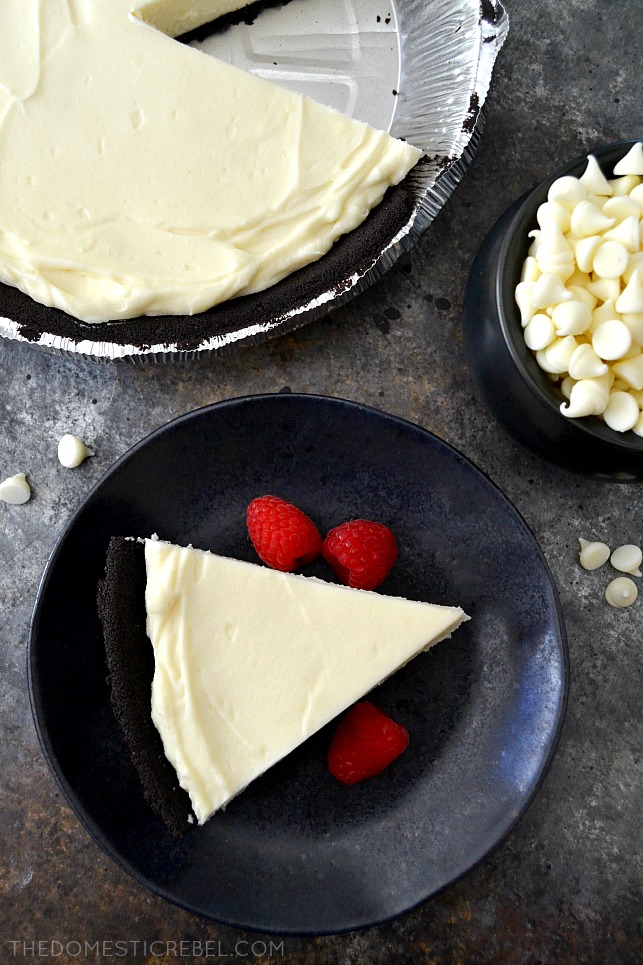 This White Chocolate Velvet Pie is now one of my favorites; One, because I love white chocolate-anything, and two, because it’s so easy to make, and it makes me happy knowing that Joan concocted it in her crazy-wonderful brain. Also, it’s no-bake, which is always a winner in my book.

Joan, thanks for the memories, recipes, and laughter. You’re sorely missed. 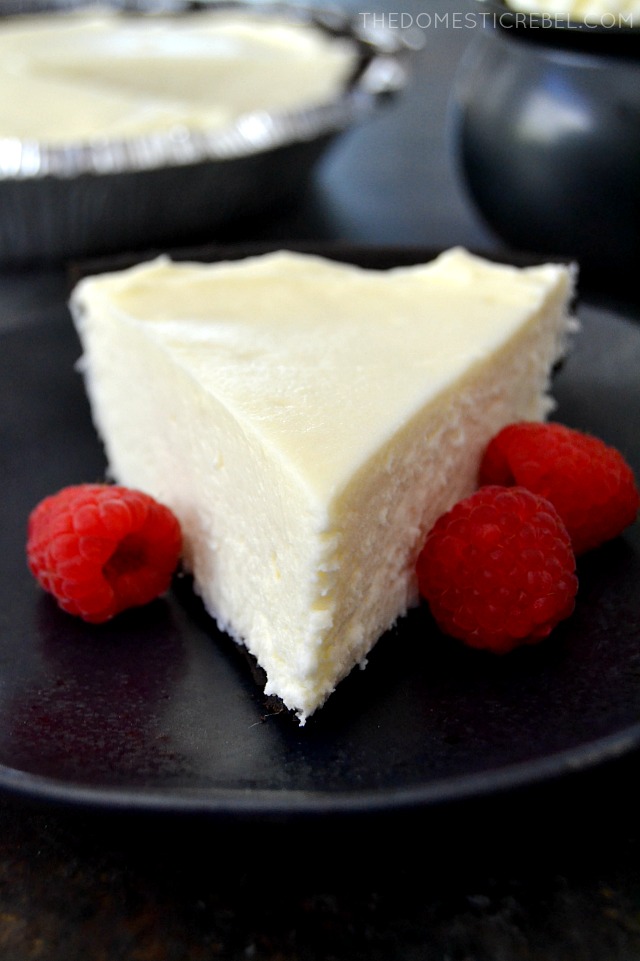 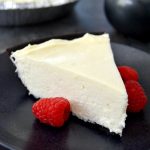 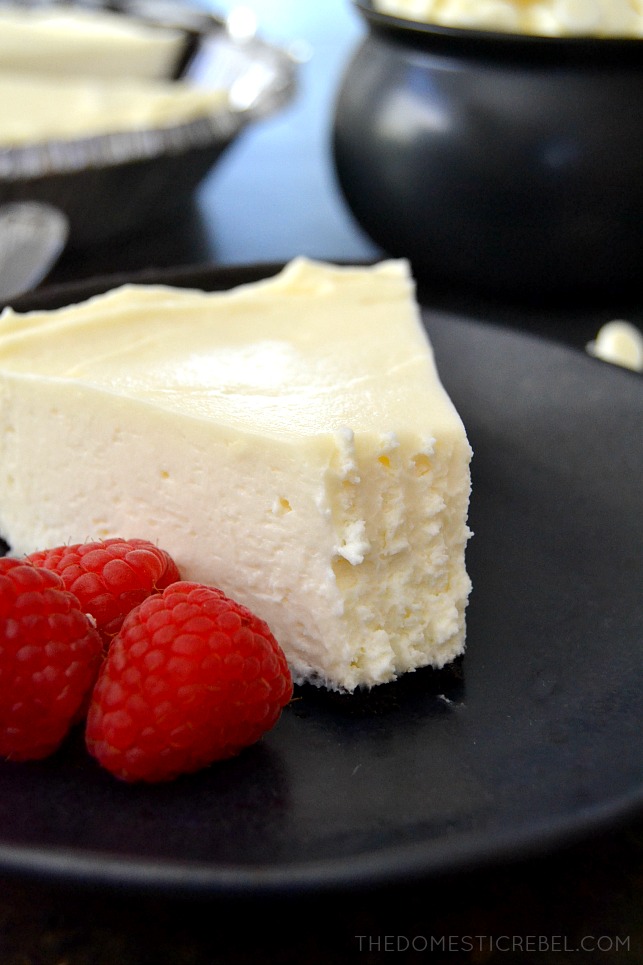 Creamy, ultra silky & smooth and just loaded with chocolaty goodness, this is one pie recipe you don’t want to skip out on!