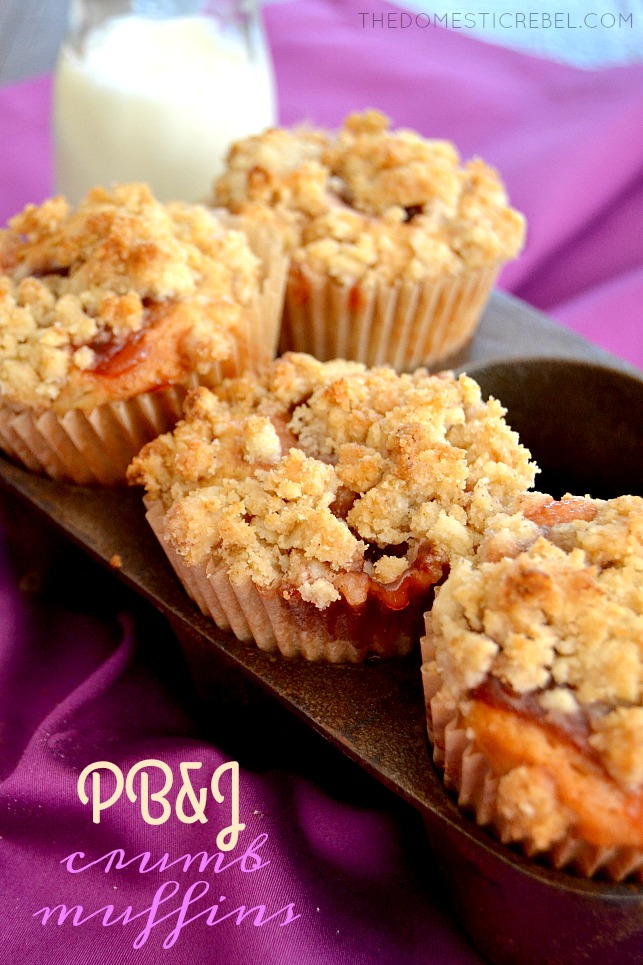 Get your kids pumped for back-to-school season with these Peanut Butter & Jelly Crumb Muffins! Tender, fluffy peanut butter muffins filled with jelly and topped with a buttery crumb. A+!

So I had an embarrassing realization recently.

I realized I’m a sound-effects person.

You know, the people who have sound effects for everything? When describing a car accident, they’ll do the whole “BAM!” to emphasize the car hitting the other car, or when describing how their dogs howl when sirens go off, they’ll mimic the same howling noise?

I realized this when I was trying on clothes at my fave clothing store in the mall. It was a balmy 100 degree day and let’s be honest, I was … damp … and trying on clothes, which should be deemed an aerobic activity. Who do I call about that? Billy Blanks? Does Billy Blanks still make those Tae-Bo tapes? (Side note: we used to have those Billy Blanks Tae-Bo tapes on VHS when I was growing up. Sometimes, to burn off energy, I would complete them. I was like 12.)

As I was hoisting my shirt over my head, I made an “eeeggh” noise. Then as I attempted to zip myself into a dress, I made a “heppp” noise as I zipped. Then as I bent forward to put on my shoes, I made an “mepp” noise. A MEPP NOISE. What even is a MEPP? I do not know, but I said it plenty loud in this dressing room like I was some kind of voice actor trying out for a demented animal in a new movie.

So it was then, when the customers in other dressing rooms STOPPED THEIR CONVERSATION after I “mepped”, that I realized I need to quickly shut the heck up and quit it with these weirdo sound effects before I was labeled as “the sound effect person” FORREAL and FOREVER. I don’t want to be known as a mepper. I do not want people to stop their conversations because some freak (me) in the next stall is babbling incoherently. WHAT IS HAPPENING WITH THE WORLD.

After that, I came home and made Peanut Butter & Jelly Crumb Muffins. As you do. 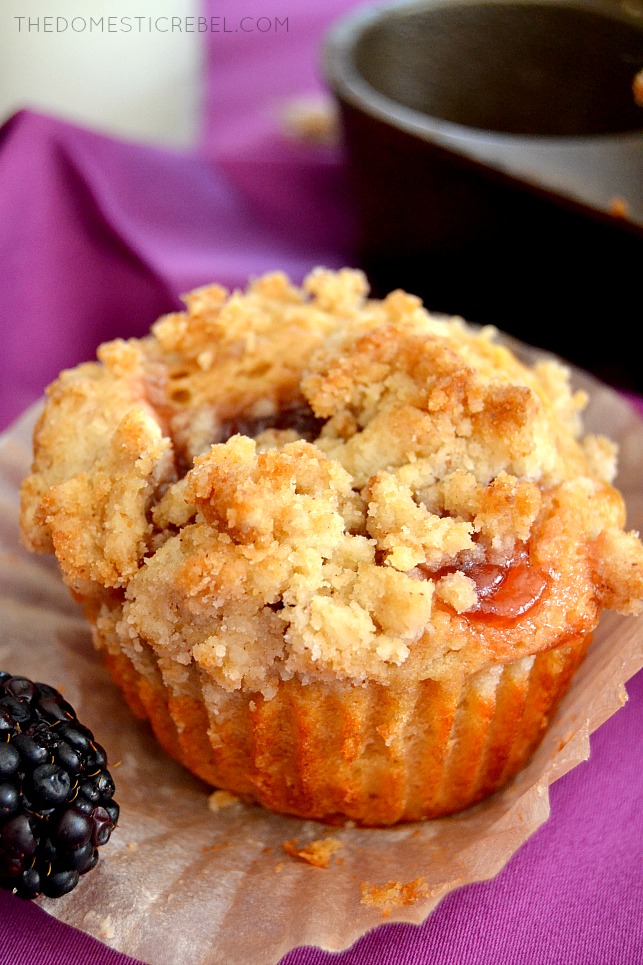 These muffins are kinda fantastic. They have a light, moist and fluffy peanut butter muffin base that’s not super dense and just peanut buttery enough. Then they’re baked with a dollop of jam/jelly/preserves/whatever you call that sticky goo – and a buttery, brown sugary crumb. After they’re baked, they’ll be all golden and perf and you’ll want to squeal but don’t, because that’d be weird. (JK. I totally squealed). 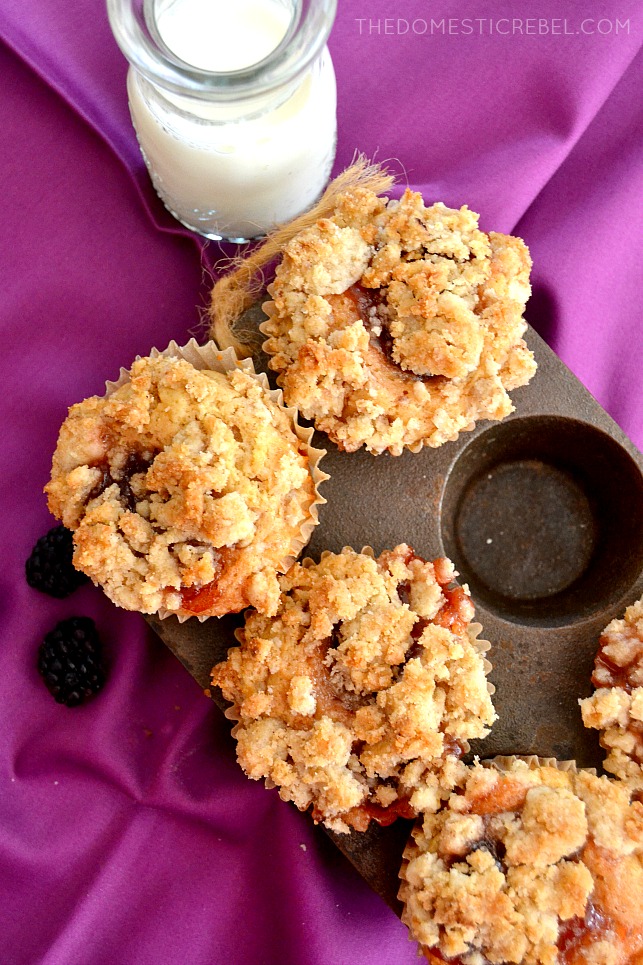 *muffin base adapted from The Frugal Girls. Idea inspired by How Sweet Eats. 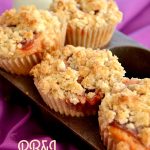 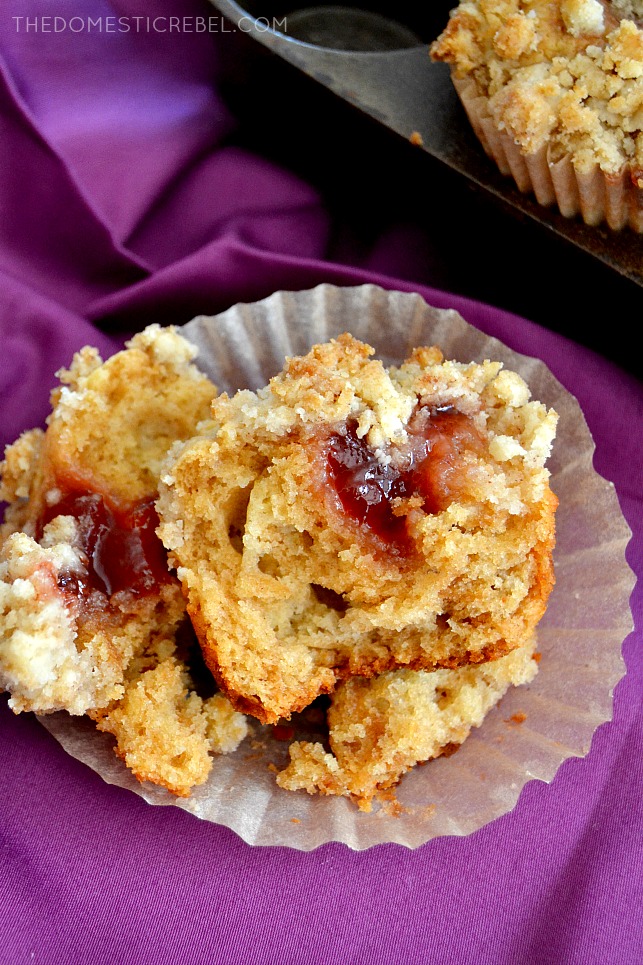 Buttery, sweet, a little salty, with a great crumb on top. Is there anything more perfect than these PB&J Crumb Muffins?! Bake up a batch on Monday for breakfast throughout the week! (You’re welcome).