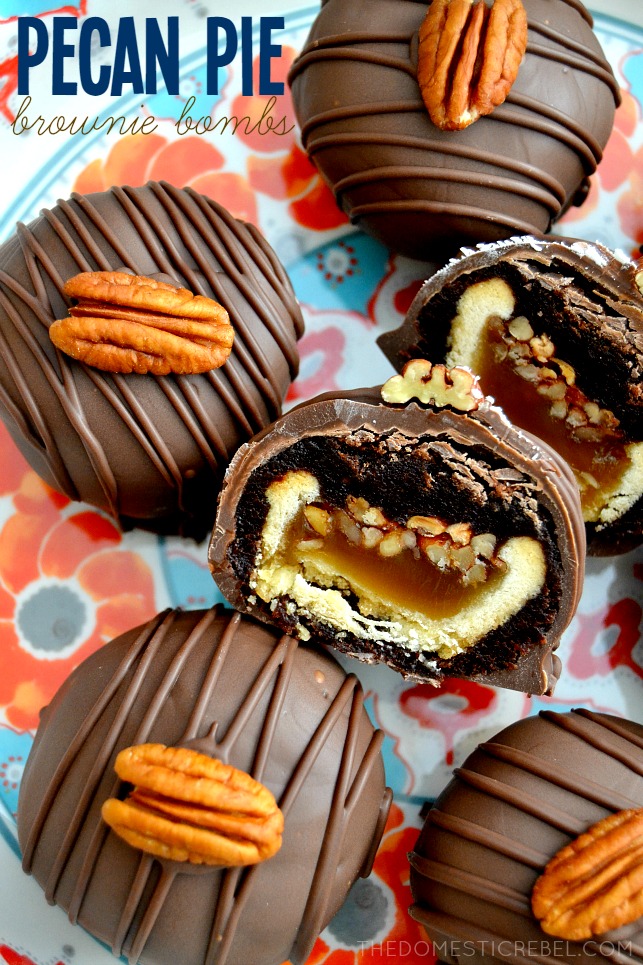 Lately, something’s been up with my stomach.

No, I didn’t grow abs overnight (I wish) and my muffin top didn’t magically disappear (why, god, why?).

Nope, it’s that lately when I travel, I feel super sick.

Chalk it up to nerves if you wish, but I never used to get car or plane-sick. And now? I can barely make it through a flight without going to the bathroom 387634 times. And if you’ve been on a plane, you know that it’s never actually convenient to use the facilities. You either have to navigate around the beverage cart or climb over your seat-mates like they’re Kilimanjaro.

And okay, can I sound off for a second? (Who am I kidding, this is my blog. I can write about whatever I want.) But brands who sponsor me when travel is involved… they think I always want the window seat. I never really thought this was an issue until every brand trip I’d go on, it’d be in a window seat. At first I thought it must have been slim pickin’ and I was randomly dealt a window… but then it became a pattern and I’m now needing to specify like a little diva that I need an aisle seat.

Let’s just say, IBS and window seats are a no bueno. Because inevitably I sit next to two very large people, both of whom are sleeping on the (very long) flight which means I have to wake them up and climb all over their seats to get to a bathroom no less than 3 times during an average flight. It’s awesome, if peeing your pants on a sleeping stranger is awesome. Surprise!

And the car? Now I’m carsick during long trips. I had to ride a party bus for a business trip not long ago and I felt like my insides are being scrambled, which, in case there was any doubt, is not as awesome as it sounds. It was kinda like when you push your cart over those yellow bump strips in front of stores which, by the way, are probably the worst thing for someone in a wheelchair. I mean, you’re pushing them over these freakin’ golf-ball sized bumps which seem like they last forever, and that kinda crap can pop a brain aneurysm if you’re not careful or at least tilt their chair and dump them onto their ass. It’s not pretty, and I hate those things with a passion. Let’s burn them all. 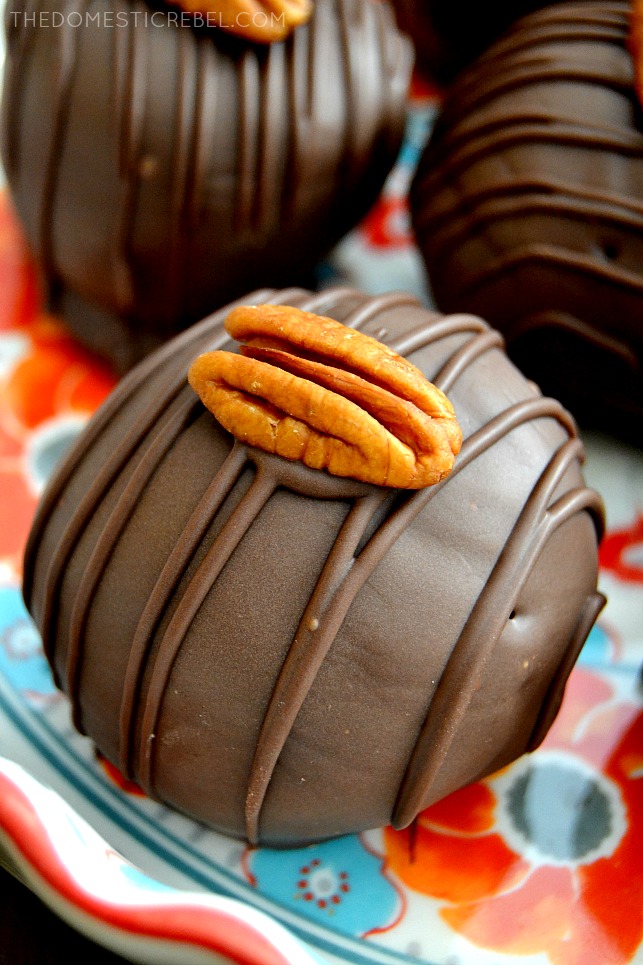 ANYWHO. The point is, I travel quite a bit for my blog and it’s getting hard with this new trend in sickness. I hope it goes away soon, but in the meantime, let’s talk about something delicious and happy: these Pecan Pie Brownie Bombs. These bad boys are absolutely scrumptious and totally insane. They came to me in a vision when I spotted miniature pecan pies in my local supermarket bakery. I’ve also seen them at Walmart, Target, and sometimes in the frozen section at grocery stores, just so ya know. And when you buy them, buy two because you’ll definitely pop a couple while you’re making these bombs. 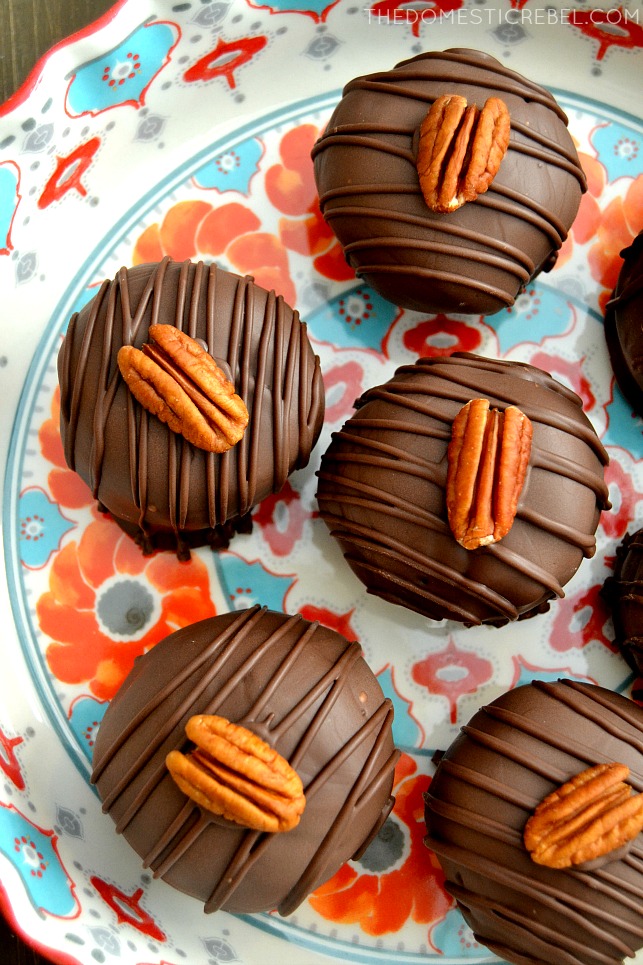 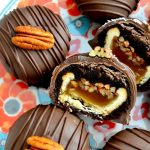 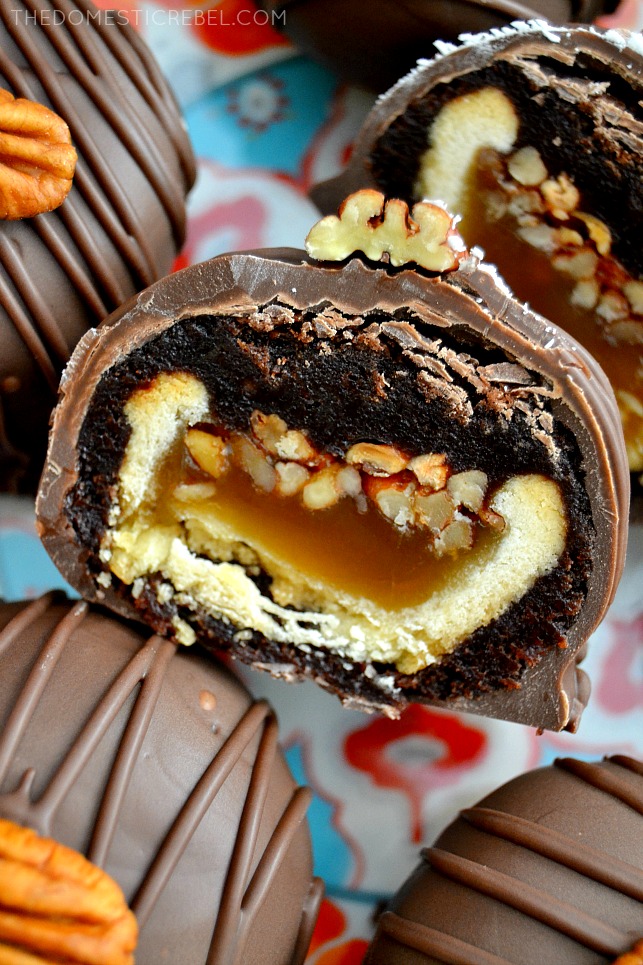 As I mentioned in the notes, if you can’t find mini pecan pies (as they’re typically seasonal and found in the bakeries at supermarkets), use a regular pecan pie, chill it briefly until firm, and scoop heaping, rounded Tablespoonfuls of the inner filling and place them on a foil-lined baking sheet. Freeze until firm, then proceed with the recipe. You’ll have a gooier interior, but it should still work!

These are gooey, buttery, and loaded with that amazing, rich pecan pie flavor surrounded with fudgy chocolate brownie. You don’t want to miss this recipe!