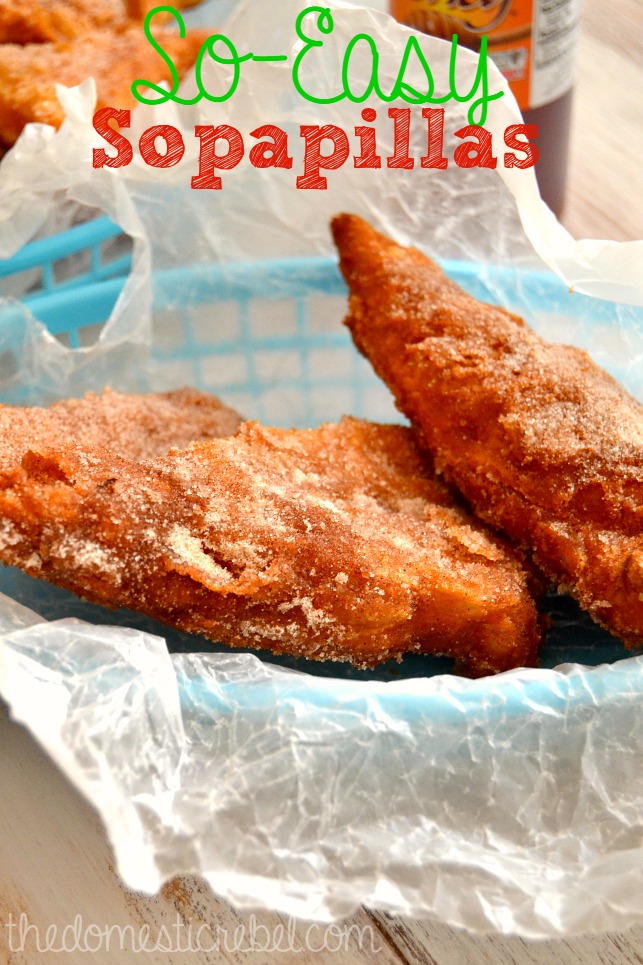 Do you guys have that restaurant or store that changes its name like, twice a month?

You know the one. You drive by one day and it’s Grandma’s Diner. Then a month later it’s Alex’s Gyro Shop. Then two months after that it’s a burrito place. Then about a year after that it’s now a burger joint. It’s like the building has a curse or something and banishes all restaurants to the underbelly of unsuccessful food shop hell.

Anywho, we used to have a place near our old house called Salsa Fresca. Salsa Fresca had the best, most authentic Mexican food and we ate there probably three or more times a month, always had our celebrations there, and basically worshipped the dang place. It was your standard hole-in-the-wall Mexican place with minimal decorations and Pepto-Bismal colored walls, but the food was phenom. And they served the most badass sopapillas EVER.

Then one day we went to dinner and Salsa Fresca was no more. It was under construction to be some other new, whatever restaurant for approximately .1487 seconds before dismantling and transforming into something new. We were devastated. No more sopapillas. No more spicy salsa. No more amazing red rice. All gone, like dust in the wind or Tamagatchis.

But then we happened to drive by another day and it was Coco Loco. We went into Coco Loco to find that it.. was exactly the same restaurant. Different name but same menu, wait staff, and tacky decor. And same food — we were reunited once again with our fried heavenly dough.

Coco Loco, despite it’s loco name indeed — apparently was more popular than Salsa Fresca and lived to see several years before transforming into another Mexican restaurant with terrible food and even worse Pepto-Bismol-y decor. And soon we moved on as well, to a new house and a new favorite Mexican food restaurant. (God, doesn’t this sound like some kind of weird Notebook-style breakup story?) 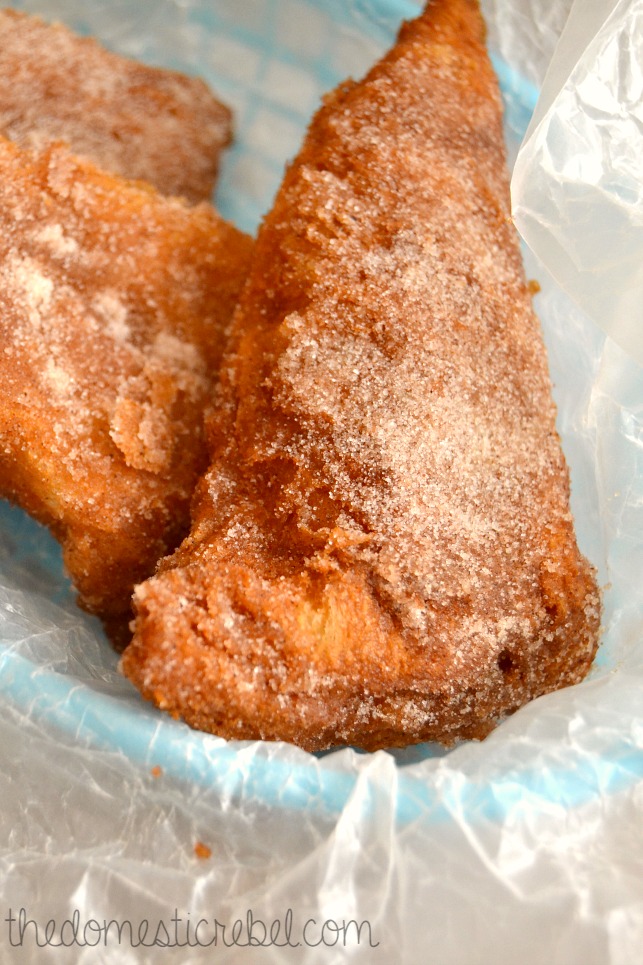 WELL. Even though I haven’t had a sopapilla quite like Salsa/Coco’s, these were pretty much spot-on. Hot, sweet pillows of dough freshly fried until golden and crispy and smothered in cinnamon and sugar, just like how I remembered it. Some sopapilla recipes feature citrus-y accents or powdered sugar — and I’m sorry, but those recipes are wrong. Sopapillas, IMO, are basically just dough mops meant to soak up all that cinnamon and sugar. Leave yo fruit and powdered stuff away from my sopapillas, please! However, eat ’em how you like, as a lot of people enjoy dousing theirs with honey.

Best part about these? No need to worry if they’ll go out of business tomorrow and turn into another funky restaurant. And you can enjoy them from home, where I hope you don’t have funky Pepto Bismol walls. 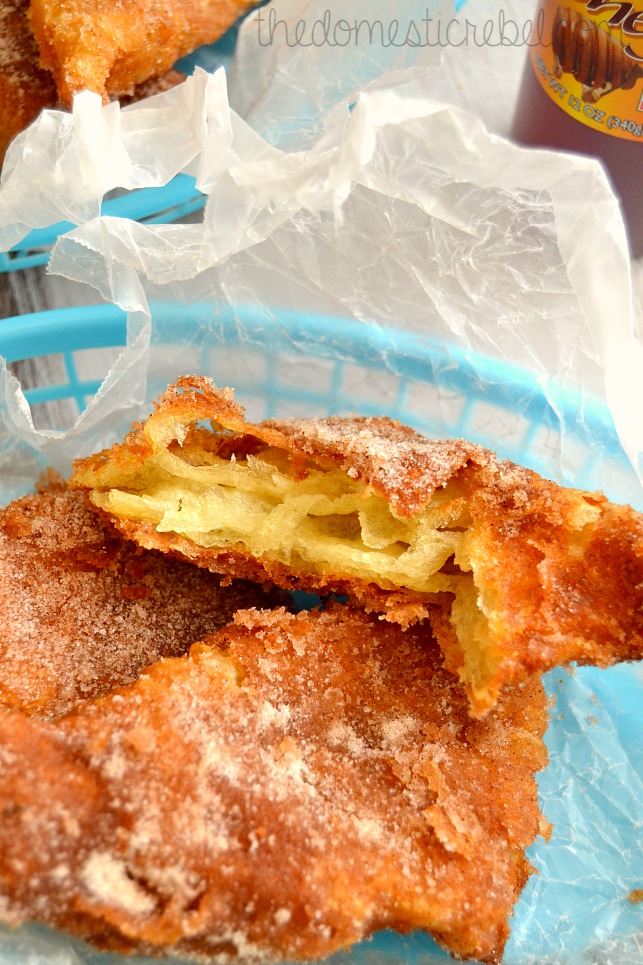 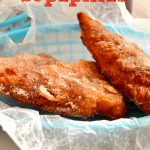 These fried pillows of heaven are called Sopapillas, a traditional Mexican dessert. Typically made of a dough, my version is EASY because it uses refrigerated crescent rolls for a foolproof, instant recipe that will please your whole family! Top with ice cream, chocolate sauce, or the traditional condiment: honey, if you'd like!
Cook Time10 mins
Total Time10 mins
Course: Treats
Servings: 8
Author: Hayley Parker, The Domestic Rebel 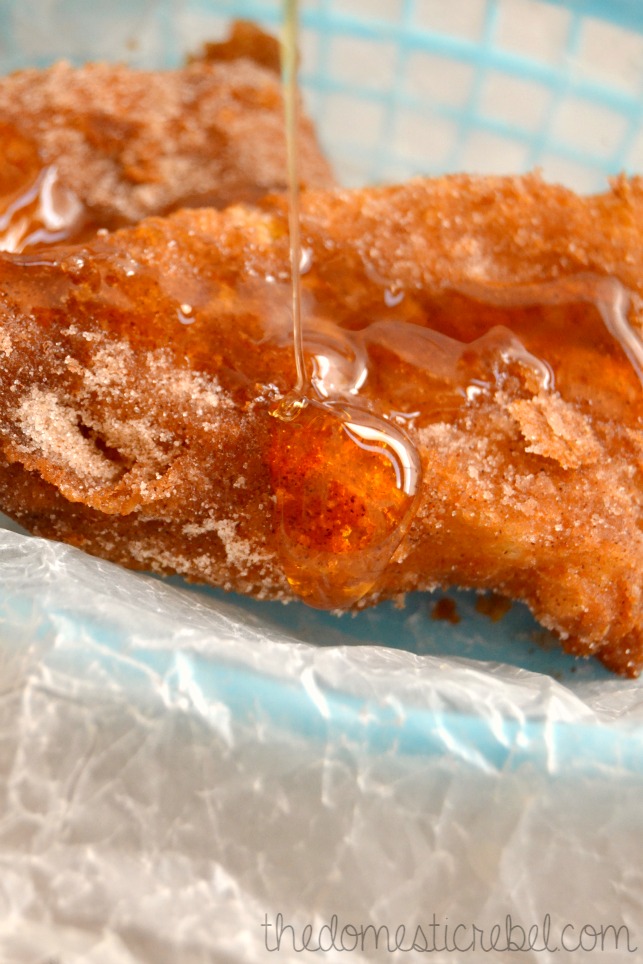 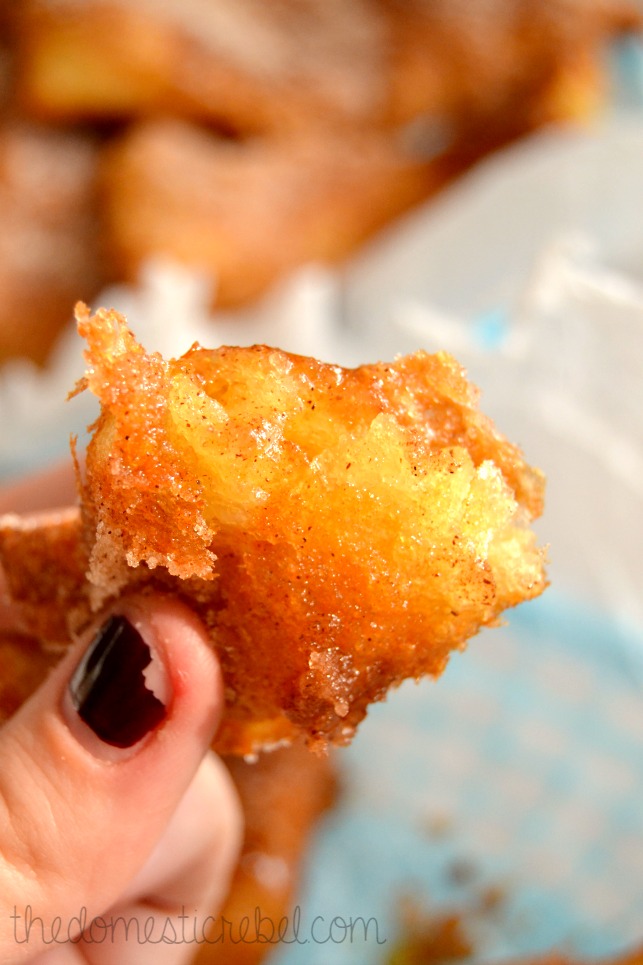 So simple, it’s only really one ingredient since I’m assuming you have sugar, cinnamon and oil on hand! These turn out perfectly golden and crispy, with a crunchy exterior and a soft, fluffy dough inside. By smothering the sopapillas with cinnamon sugar while they’re still hot, it gives the cinnamon sugar a chance to caramelize the outside of the sopapilla, making it extra sweet and crunchy. The second coating helps adhere some more of that cinnamon sugar flavor and gives it that sparkly glimmer from the sweet mixture. These are a can’t-miss recipe, people! You must give them a try 🙂

(And please ignore my terrible manicure in that shot! Now accepting donations for this poor girl to get a paint job!)