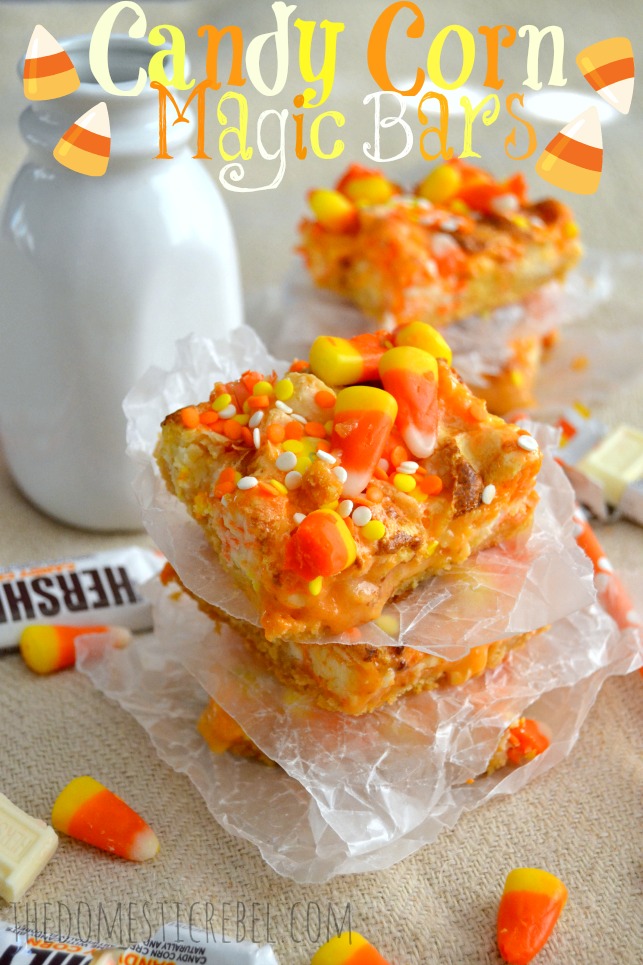 A couple days ago, I got my breakfast ready and headed to the couch to catch up on some of my favorite guilty pleasure shows: Real Housewives of Orange County: Secrets Revealed; MasterChef; Hotel Hell; and America’s Next Top Model.

I typically watch these (with the exception of MasterChef) when no one is home because the judging and disapproving looks I get from my parents while Tamra talks to her robot baby and while Tyra insists everyone smize and tooch is just far too much for me to bear.

As I turned on my TV, I was greeted with the most dreaded message any TV viewer could see: No Signal.  So after pressing the on & off button to reset the box no less than 3487 times, unplugging and plugging the machine, doing approximately 87.9 voodoo chants, praying to the TV gods, and calling AT&T, I was informed that our DVR thingie is broken.

All the booty tooching and inane Tyraisms – gone. The MasterChef WINNERS (!!!) gone. Tamra’s weird sexual innuendos and Vicki’s crazy lumpy faces – gone.  All gone.  I felt like I’d lost a special part of my soul.

See, we’re a TV family and I’m a TV kiddo, born & raised. I spent the majority of my time playing with Barbies or running around outside, but for meals and everything else, I was plopped in front of the boobtube. As a result, I’m keen on TV trivia for particular shows, know schedules like the back of my hand, and am expert at navigating through channels and commercials like some kind of TV honcho.

So without my TV, I felt a little lost. Was it the end of the world? No. So no need to troll my comments with your sarcastic pity comments, thanks. I could always catch up on my books and magazines, clean the house, bake, blog, walk my dog – there’s a list of billions of other productive things I could do instead of fill my impressionable young adult head with toxic reality TV garbage. But did I want to do those other things? Hell to the nah. I’ll take watching Gordon Ramsay black-light spotty beds on Hotel Hell than change my own damn sheets.

The worst part of this entire fiasco? Having to break the news to my equally-addicted family, who surely would flip their little tushies over the fact that our beloved TV had done broke on us. I almost considered blasting Sarah McLaughlin’s “Arms of an Angel” and lighting candles so when they walked through the front door, they’d know something precious had died. Unfortunately, we don’t have any candles lying around and I couldn’t get the song without seeing puppies dying on YouTube, so I just figured I’d break it to them the hard way when they came home and realized the black box had lost its soul and had gone to heaven with other precious things, like Arrested Development and VCRs.

But then I also realized I had baked these Cotton Candy Magic Bars that very day, and so my night could happily be spent chowing down on bar after bar of these candy cornlicious treats. Winning. 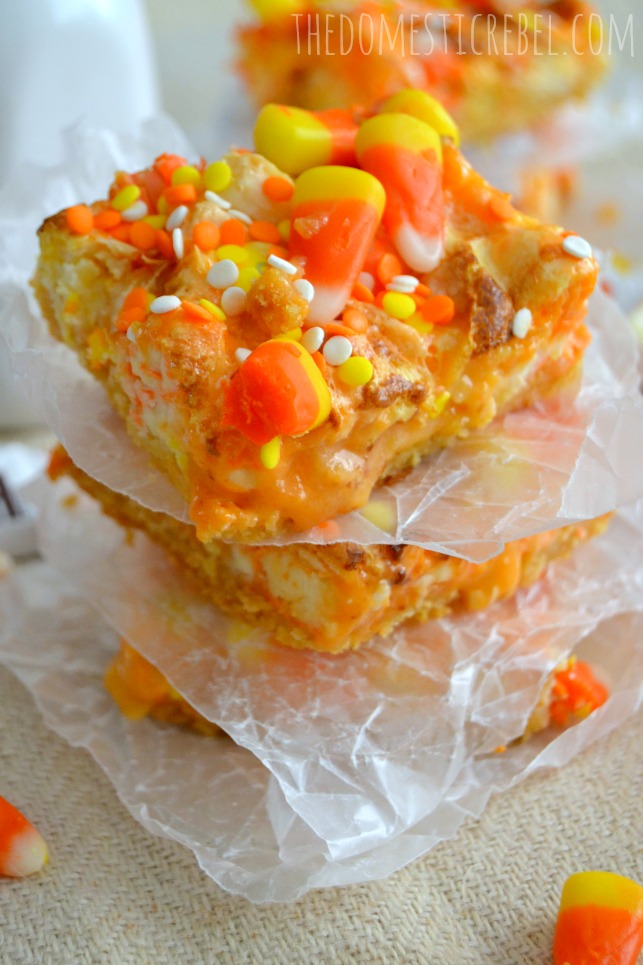 So this begs the all-important question here: do you like candy corn? I, for one, love the stuff and eagerly anticipate its arrival every fall season. I love the different wacky flavors (this year I’ve spotted s’mores, pumpkin pie and caramel macchiato!) and I love eating it colored-section by colored-section, thanks to my OCD. Its sweet, kinda waxy vanilla & marshmallow-esque flavor is just quintessentially fall, and I could think of nothing more “fall-y” than these Candy Corn Magic Bars!

Loaded with — you guessed it — candy corn, these bars are only for the candy corn lovahs out there. Those who frown at this seasonal staple, ya may want to avert your eyes, because there’s a whole lotta candy corn lovin’ happening here. Candy corn bits, candy corn marshmallows, candy corn M&M’s and Hershey’s NEW Candy Corn White Chocolate all on top of a nice & chewy cake-base, then smothered in toasty sweetened condensed milk. Did I mention how much I love candy corn?

Almost as much as I love crappy reality TV. But at least one of these won’t die on me! 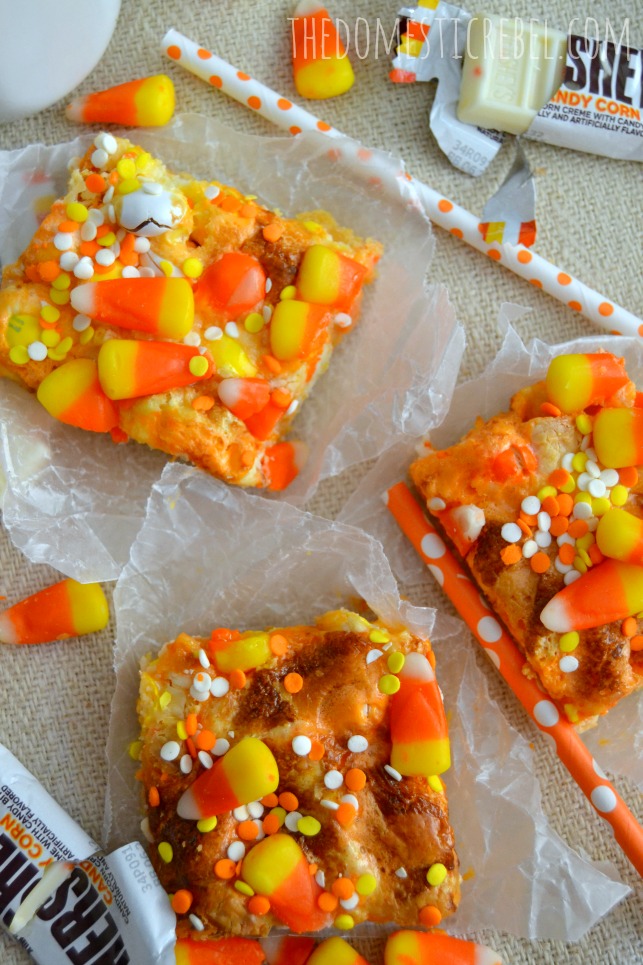 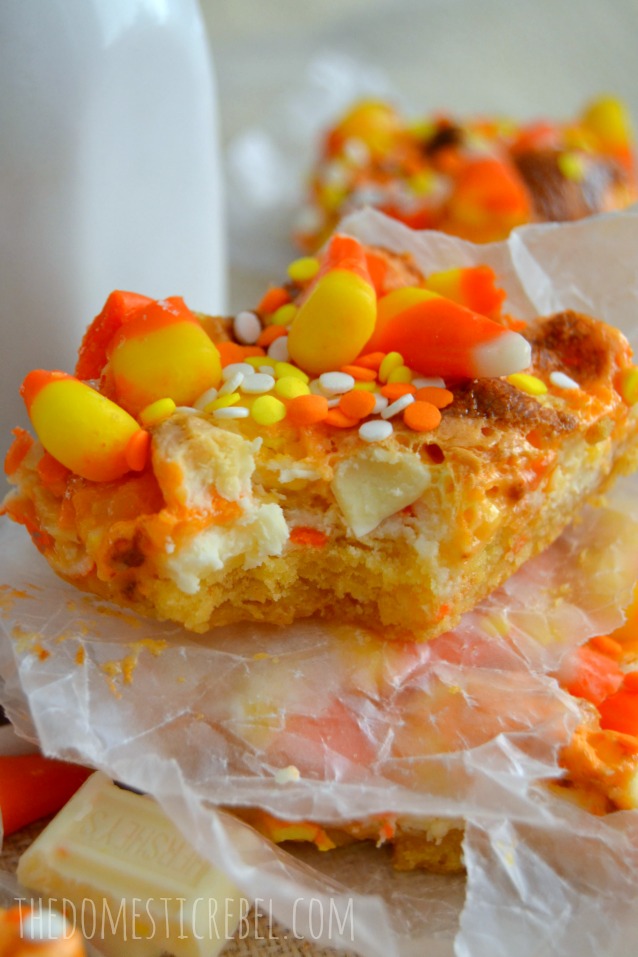 Words cannot accurately describe how much I love these bars! They are so irresistibly sticky and gooey, thanks to those lusciously light candy corn-flavored marshmallows, and have great crunch from the M&M’s and candy corn pieces on top! The reason the actual candy corn isn’t baked is because it tends to lose its consistency and harden up once baked, so sprinkling it onto the gooey, freshly baked layer as a last step helps it retain its shape, texture, and colors, and helps keep the bars pretty and edible! Don’t want you breaking a tooth now, do we? 🙂

*For reference… I purchased the candy corn M&M’s, candy corn marshmallows & Hershey’s candy corn chocolate bars at Walmart. I also found they were available at Target.*