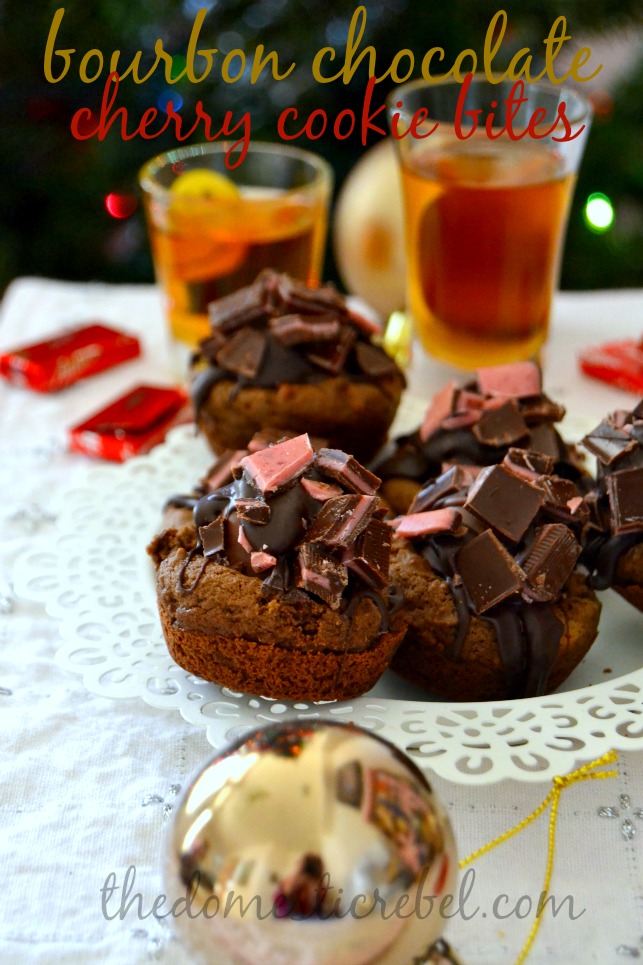 Who was the worst boss you ever had?

Some of you may not know, but on Monday I was FINALLY freed from my own personal prison called my latest employer.  This meant I was no longer responsible for answering calls from concerned clientele and responding with answers I was not confident with because our procedures and processes at that job made Alice and Wonderland look logical and straightforward.  I no longer had to be a slave to my cubicle, be timed when I used the restroom (not even kidding) or have my calls recorded for “quality assurance” (which is their friendly way of saying “for being Big Brother-y”).  And most importantly, no longer did I have to work with the WORST bosses on the face of the freakin’ planet!

It was enough to get me royally smashed the night I was fired.  And celebrate with an ice cream sundae, as most recent fire-ees do.

So yeah, not only did they TIME OUR BATHROOM USAGE (!!) side note: isn’t this a violation of something?  Like, um, bowel intrusion or something? so I knew when I set personal records of walking to the bathroom, urinating, washing and walking back in under 2 minutes and 30 seconds, but they also called us ‘inadequate’ to our faces and would set their scary spy minions out to listen to our conversations.

Dude, never in my life have I felt more like Winston Smith than I did there.  Maaaaahhh gawwwwd, it was 1984 eerrrryydaaay.

Anyway, my boss in particular I called “Glinda the Bad Witch” because she had the jovial, sweet appearance of Glinda (if Glinda had a pseudo Farrah Fawcett hairdo — and um, can someone tell her that that hairstyle died 40 years ago?) but the black soul of the Wicked Witch, if the Wicked Witch also murdered puppies, ate children and hated Christmas music, AKA, all the evil things one can possibly do.  She huffed and puffed herself down the aisleways of our cubicles multiple times a day barking orders and asking us if we could login to the website where we did the majority of our work.  And if the website was down, well, she’d still ask, and if you said no, she’d get angry.  You could usually tell because her hair would get more feathery and her jovial expression turned scary and red, like a violent tomato.

Her favorite pasttime was sending no less than five thousand emails a day, usually about procedures, but she did have a knack for sending sassy ones about making sure you were in the right phone mode, or ones where she told my coworker Sarah that Sarah had “attitude.”  This didn’t really bother us because we spent the majority of our shift laughing at what an assclown Glinda was with her regular rotation of garish tops and her matching clogs because seriously, who the hell wears clogs?

She enjoyed demanding tasks get done, phones get answered and that we remained busy, but she spent her ten hour shift holed away in her office eating cheeseburgers and staring intently at her computer screen.  90% of the time, her office door was shut and she was inside speaking with one of her minions — usually the googly-eyed one who answered questions with questions, had the IQ of a fork and spoke like she had a broken jaw — while we slaved away for her perfect numbers that she could report to the dingbat cult-leader director who frequented the office and made all of management squirm like the flea-infested rats they are.

And she hated that I wore skulls on my clothes or jewelry, probably because she was born without one and was therefore incapable of filling her head with anything except air and bullcrap.

Anywhoooo, the second they pulled me into the office and informed me I was being fired, I was given a box to pack up my things while the rats scuttled around my cubicle picking at their butts and feeding the poop to one another.  And when I stepped outside at 6pm — 3 hours earlier than my regularly scheduled shift — I just about did a Celtic jig to my car.  And then I came home and drank bourbon.  That’s precisely where the idea for these cookie bites came from!  Bourbon + bad day + incessant need for cookies can conjure up some pretty brilliant ideas 🙂 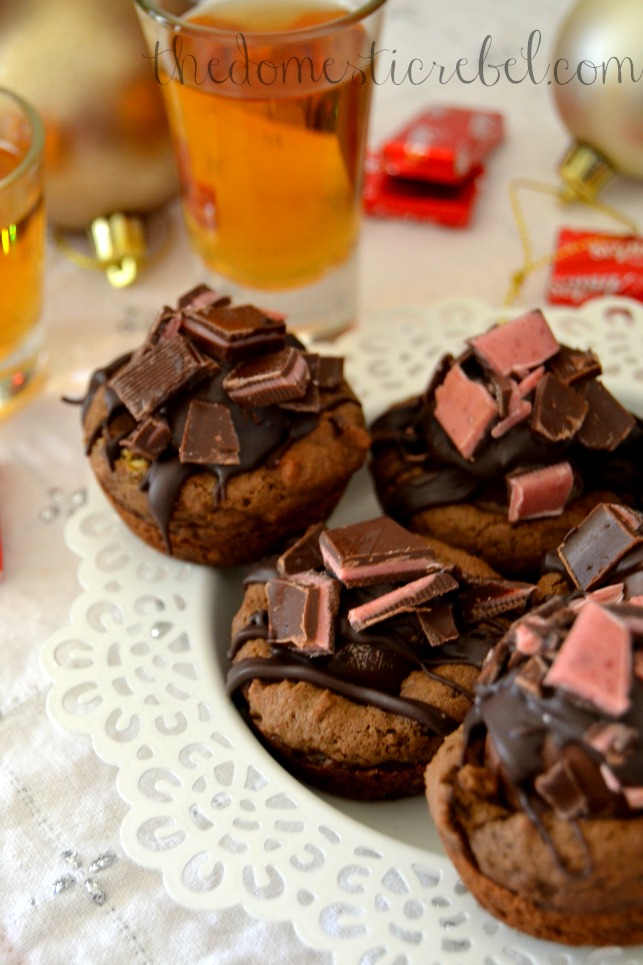 These cookie bites are loaded with chocolate and bourbon, then topped with a boozy chocolate covered cherry, more chocolate, and chopped chocolate cherry pieces.  It’s the ultimate bite for the chocolate-cherry lover, and it’s a festive, adult-y treat for your Christmas party!!

Make them, and then talk about how much you hate your boss.  You’ll be happy you did because your boss is obvi not as cool as you and is obvi not eating awesome boozy cookies. 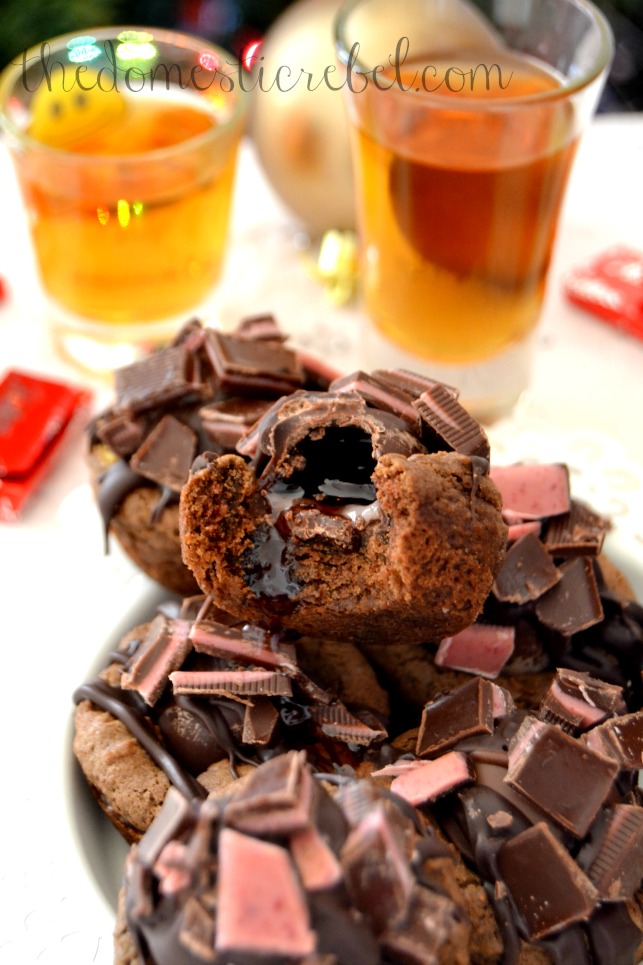 Cherry and chocolate are a delicious combination that always reminds me (oddly) of summertime (chocolate cherry colas or cakes!) and Christmastime (those delicious amaretto cordial cherry candies!).  Melting a boozy chocolate cherry candy into the center of a gooey, bourbon-laced chocolate cookie is such a smart idea because it blends the bourbon-y background flavors so beautifully and adds that hint of sweetness and spice to the batter.  The drizzle of chocolate and additional chocolate cherry candies on top is optional, however, I highly recommend it for added flavor + crunch!  I love the additional punch of that bright cherry flavor from the candy and I am officially OBSESSED with the Limited Edition Wilton Chocolate Cherry Melts [I scored mine at Michael’s]!  You MUST find them and hoard them for eternity 🙂