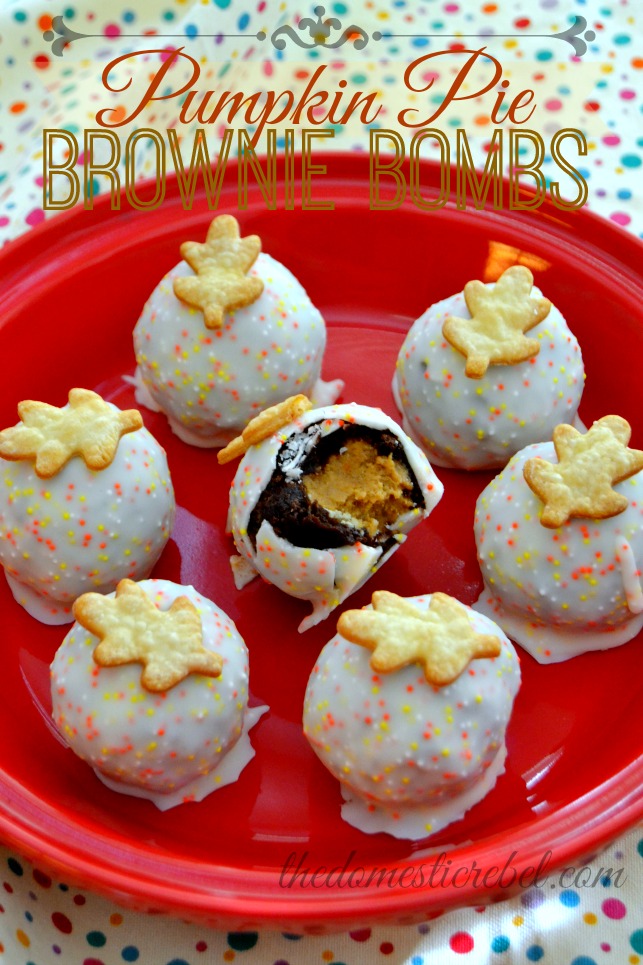 A few days ago, I was invited to one of my best friend’s son’s birthday party.  He was turning 3.

Prior to the event, however, I was having irrational anxiety about a 3 year old’s birthday.

I spent a good hour browsing the boy toy aisles in Target trying to find the perfect toy for a child I didn’t really know.  Actually, I don’t really know any children and always make it painfully obvious when I unknowingly ‘insult’ the children and/or parent.

Example: a parent will say “Oh, Billy is starting to crawl now!  He’s only 11 months old!” and I’m like “really?  He’s crawling at 11 months?” and then the parent proceeds to give me the death glare like how dare you insult my crawling baby.

Just so you know, I know nooooothing about babies.  When they’re supposed to crawl.  When it’s prodigal of them to read.  When the typical walking time frame is, etc.  If I question your baby, it’s just because still pooping your pants at two seems too old, or walking at six months or whatever seems insane.  I have no clue.  I promise I am not insulting your child.

So you can imagine my fear as I shopped for a toy for a three-year old.  What do three-year olds like?  The last time I shopped for a little boy toy was when I was buying Hot Wheels and Thomas the Tank Engine stuff for my younger brother… about fifteen years ago.  And even then, I was too stuck up in glittery Barbie-girl world to even notice what boys played with.  GI Joes?  Legos?  Hell if I know, just pass me my Skipper doll, dammit.

Anyway, I asked approximately 14 strangers in the toy aisle what typical three-year olds liked, and all of them looked at me like I was a scary weirdo who drove a windowless minivan.  Would NERF guns be too violent?  Would puzzles be too advanced?  Are standard Legos a death-sentence for a three year old?  I DON’T KNOW MAN.

Eventually, I found a little handheld video game thingie based off of one of Disney’s latest movies and figured it was pretty safe for a three year old.  No potential choking hazards, nothing rocket science-y, and most importantly, not a Barbie which I was pretty much 99% convinced I would buy him instead because I had just about given up on this boy toy thing.  But as I walked around with it in my cart, I began to second guess my gift-buying abilities.  I did what any sane person would do: text the mother of said child and unknowingly insult her.

“Hey…” I typed, “do you think a video game thing would be too advanced for him?  I mean, it says 3 and up but I’m not sure.  It has them do puzzles and reading.  Can your kid read yet?  I mean, not yet, but can he?  I mean, I’m not judging him, I just wondered.  Would he have the capacity to understand puzzles?  Or technology?  I didn’t mean that he’s not capable, I just don’t even know what a three year old can do.  Wait, he can walk, right?”

Thankfully, we’re good enough friends that she didn’t think I was totally making her kid out to be some inept weirdo who sat on his hands all day.  Aaaand he loved his present, which was more important.  I only had to accost 27 people in Target regarding appropriate gift-giving for toddlers. 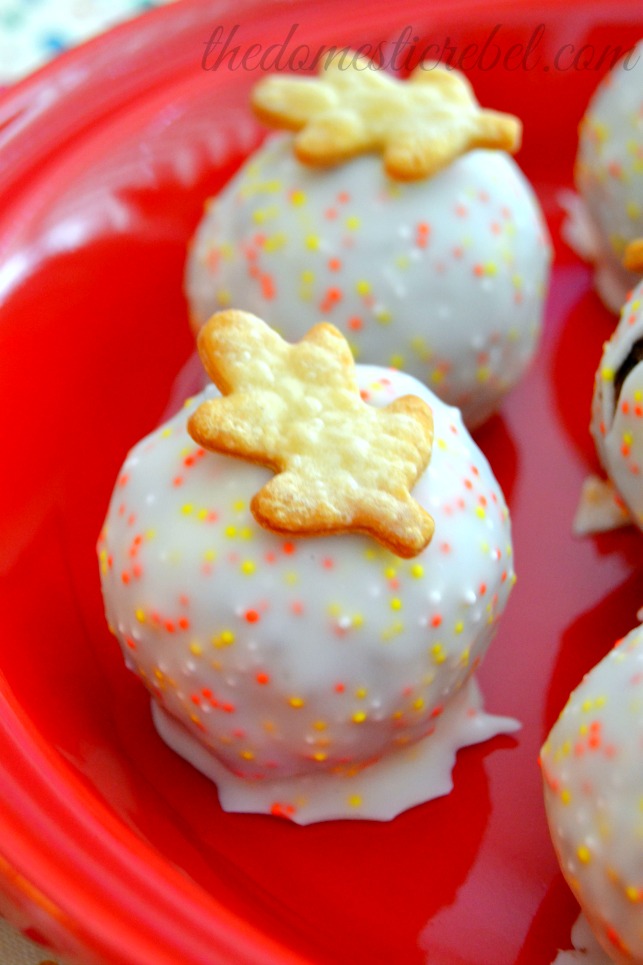 Allll this shopping & stuff makes me think of the holidays, holiday shopping and of course, holiday fooooood.  I am a total fan of everything holiday related but holiday food is my favorite by far.  Turkey and stuffing sandwiches loaded with cranberry, mashed potatoes smothered in rich brown gravy, green bean casserole topped with crispy onion strings, and of course — PIE!  While pumpkin is traditional for Thanksgiving, I thought of taking this classic Thanksgiving table staple and twisting it up by stuffing it inside of one of my famous brownie bombs.  The result of luscious, creamy pumpkin pie stuffed inside of a rich, fudgy brownie and coated in chocolate is simply heavenly — especially when topped with a flaky, buttery pie crust leave for embellishment. 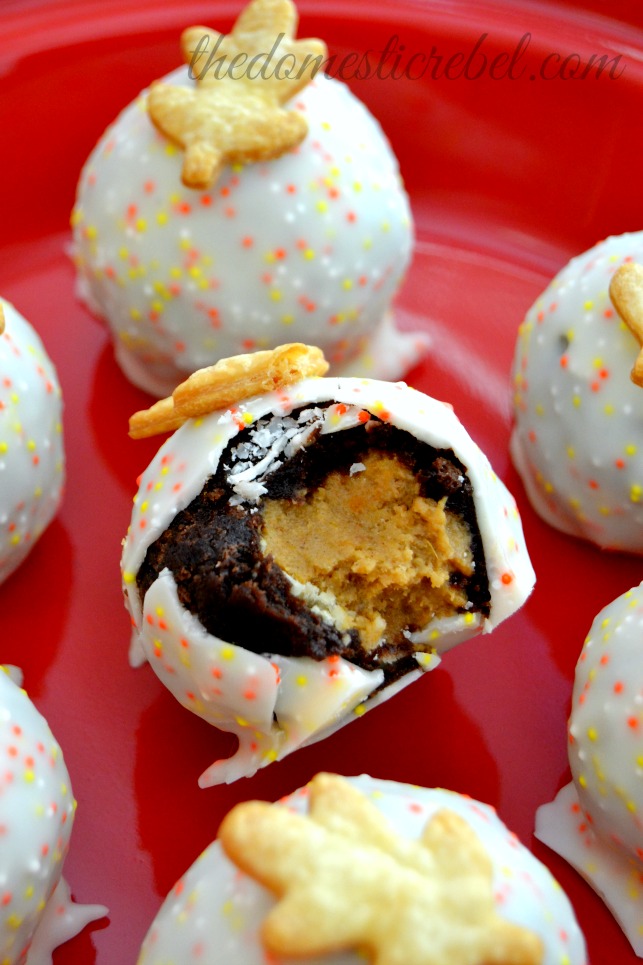 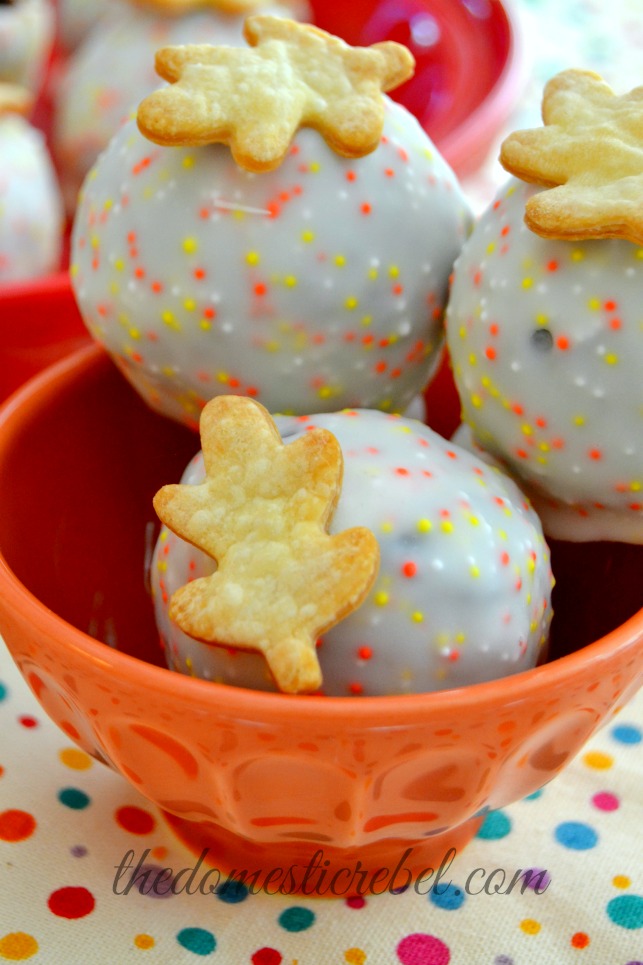 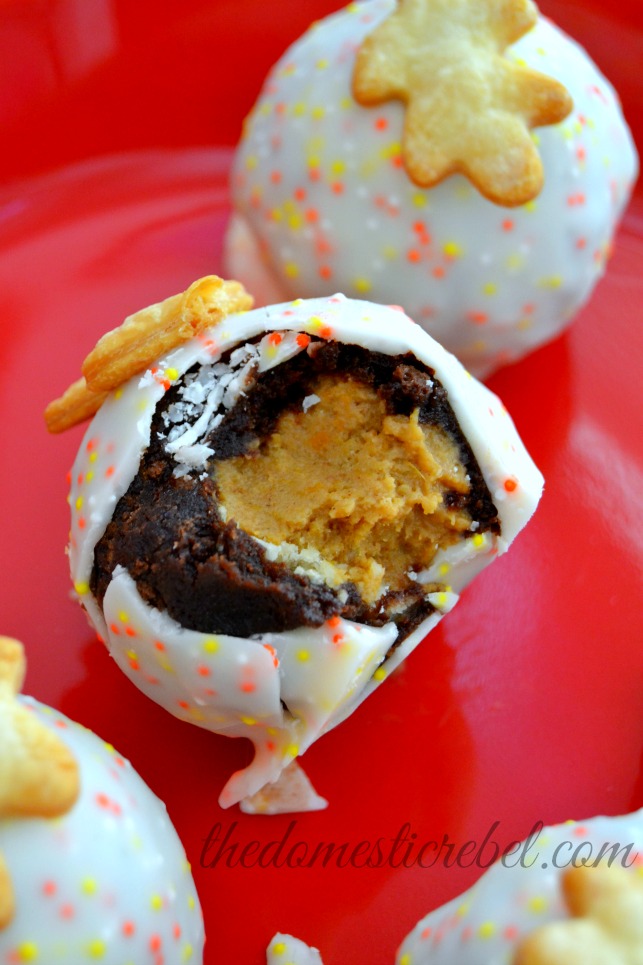 If you are looking to switch up this year’s Thanksgiving spread, these brownie bombs are the perfect alternative to classic pie.  Instead of slaving over the perfect pie (just crimping the crust is enough to give me anxiety), get a hand from a store-bought pie and jazz it up with a layer of fudgy, rich milk chocolate brownies coated in smooth white chocolate.  If you want to spice things up, consider adding a pinch of cinnamon or pumpkin pie spice to the white chocolate after melting to give it a nice, warm hint of flavor.  Or if you’re short on time, save any remaining pie crust from the actual pumpkin pie and crumble it on top of the bombs for a rustic garnish — no baking necessary!  These bombs are sure to please family & friends this holiday season!!!