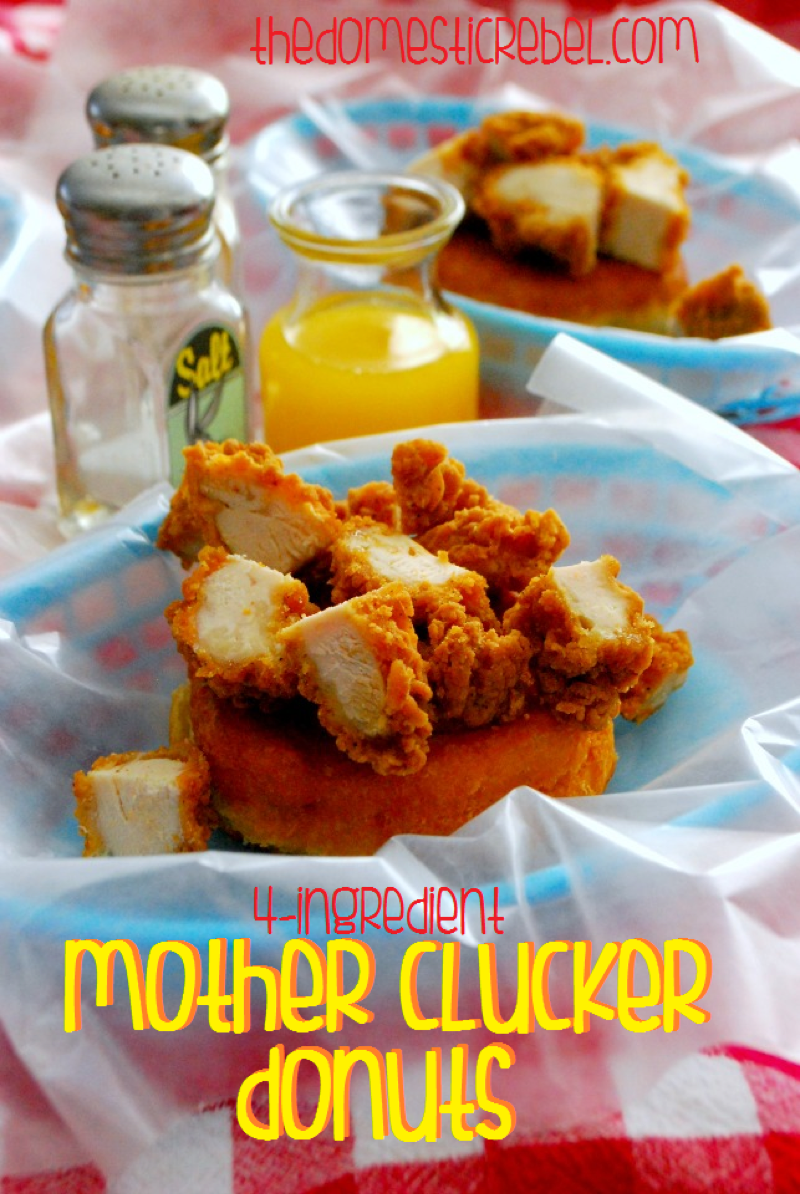 I did a lot of ‘first things’ while I was in Austin.

I met Ree for the first time.

I had a donut with chicken on it for the first time.

And, oh yeah, I was led astray by the blogging conference and taken to a bar where there was supposed to be a sanctioned after-party but where, in fact, there was no one blogging related there except myself and Sarah, and where we were given swag bags and drinks that tasted like rubbing alcohol and likely roofied to where we almost DIED.

So Sarah and I were told there was this BH afterparty at this bar called the Palm Door on Friday night.  We decided to hit it up about a half hour after it started so we could mingle with fellow bloggers and get a margarita, something we had been intensely craving since it was hotter than Hades and also because there’s only so much smiling you can do around a huge group of ladies before you need to drink. #truth

We stumbled upon the street of said bar, and it wasn’t at all like we’d expected.  For one, it was on a completely darkened street, save for one lone, flickering bulb outside of the bar.  And also, there were a bunch of creepy, drunk-ass younger dudes lurking around the entrance.  Creepy, drunk-ass young dudes who I didn’t see at the conference, and therefore, shouldn’t have been at a conference-sanctioned event…or so I thought.

Sarah and I, daredevils we are, hoofed it to the bar and were led up this dark ramp on the side of the building to this outer patio where a man gave us a swag bag and asked for our IDs.  We flashed him our conference badges and he looked at us weirdly and said, “no… your drivers licenses.”  Okay, well, we are at a bar, we thought… or so we thought.  After getting our swag on, we went into the bar which was filled with nary a soul wearing a BlogHer badge.

Everyone looked like normal bar-folk.  Desperate ladies clinging to men wearing too much cologne.  Younger guys stalking out drunk-female prey.  Ladies wearing outfits about the size of a Kleenex.  At first I thought, wow, these bloggers know how to party! as I admired a middle-aged woman with her boobs just hanging out like no big deal.  I figured it must be a rule that when on vacation, no kids = boobs come out.  I get it, moms of the world.  Put on that skanky dress and party.  Your kids don’t need to know.

Anyway, Sarah and I approached the bar, AKA the purveyor of margaritas and ordered some… to which we were rudely denied them and informed that this bar only served Sprite, cranberry juice, gin and rum.  What kind of evil trick is this? I asked the universe.  I do not want to live in a world where Sprite and horrid cranberry juice are my only mixer selections.  The bartender sensed my fear of cranberry juice and kindly suggested a mojito.

Mojitos in hand, Sarah and I headed to sit in a corner and examine this crowd of supposed bloggers.  Again, we found no one with a badge, and no one who even looked like they’d know what ‘blogger’ MEANT, much less was one.  I turned to ask the woman next to me if this was the BlogHer after party and she shrugged: “I’m just here with the band” and nodded her head toward a stage without any instruments of any kind.  THE BAND THAT WASN’T EVEN THERE.

I took a sip of my mojito and was unpleasantly surprised to find it tasted identical to rubbing alcohol.  I thought back to the one time I tried a mojito and thought it tasted weird, but I didn’t remember it tasting like acetone and I wondered if maybe the bartender got the simple syrup and nail polish remover confused.  Sarah was equally perturbed about her acetone mojito and we decided that since we didn’t know anyone here, there wasn’t a band that lady could be with, and since we were drinking rubbing alcohol, it was proooobably best that we leave before any potential roofies could kick in.

We abandoned our drinks and took off running toward the safety of our hotel bar, where we ordered margaritas that did not taste like poison and where the hotel bartender told us police had found a dead body behind the bar we had just come from only months before.  Fantastic!

We took our non-roofies margs and went to Ashton‘s pajama party, where we told everyone the amazing trials we went through just moments before.  Everyone seemed genuinely concerned yet impressed at our survival skills, but that also could be because I had just ingested Isopropyl and may or may not have been hallucinating.

Thankfully, we made it out alive and had plenty of time to work off our near-death experience and eat donuts.  Specifically, Gourdough’s Doughnuts, which are the magical purveyors of the Mother Clucker. 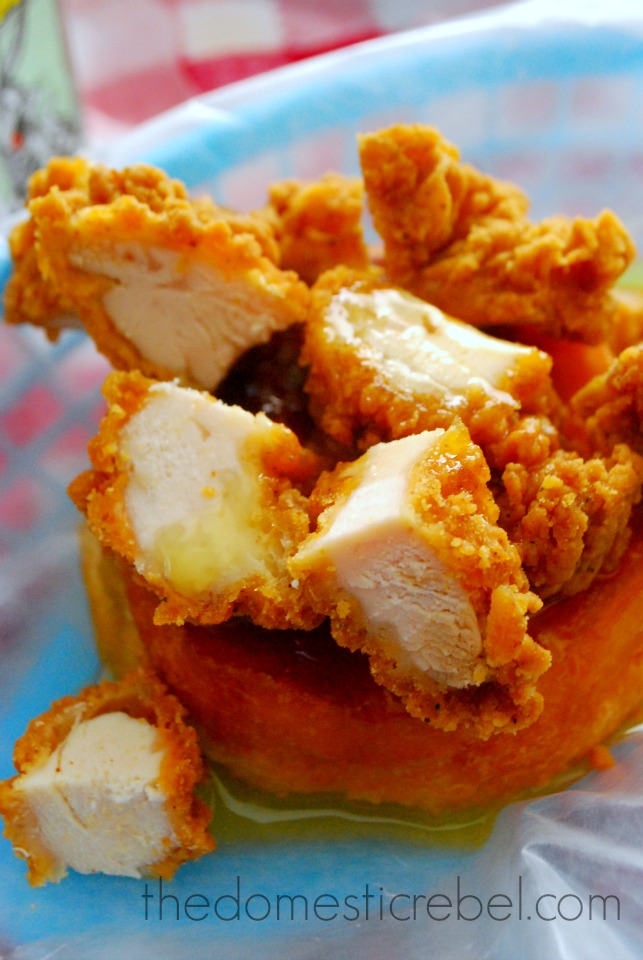 The Mother Clucker is their signature fried donut topped with a crispy fried chicken strip and honey butter sauce.  GET. IN. MY. BELLEH.  After stalking it on the website, I was determined to order it.  And after tasting its deliciousness, I was determined to make it at home.  So imagine my amazement when I basically recreated it to a T .. and my disappointment that now any diet plans I have will definitely fail. 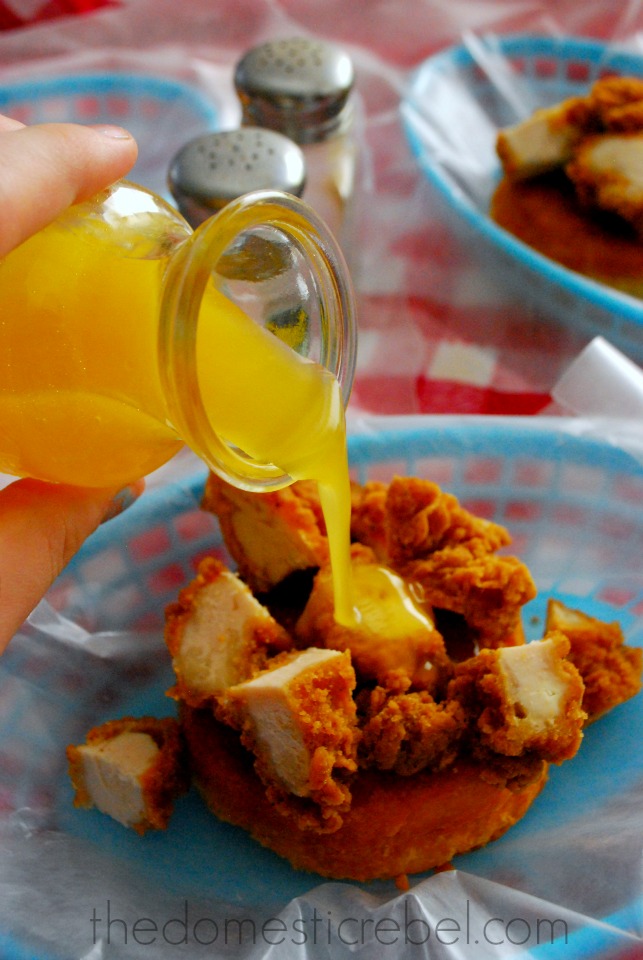 Make it, you clucker! 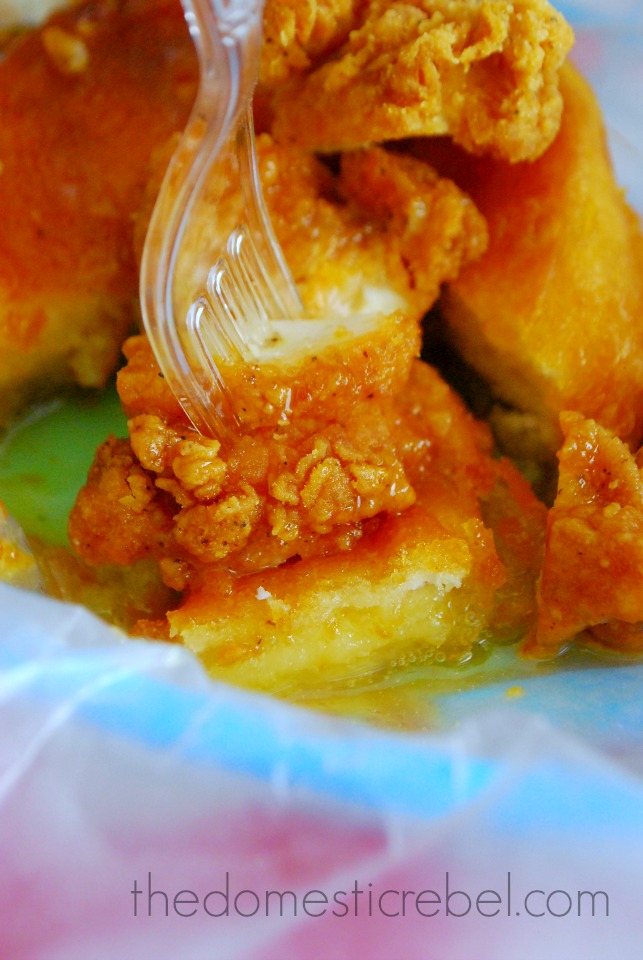 This whole week I intend on making Gourdough’s-inspired donut treats, so in order to do that, I had to have sampled a LOT of their donuts.  However, the Mother Clucker was my all-time FAVORITE.  There’s something so intoxicating about the pairing of sweet and savory for me, and this donut definitely satisfied.  The crispy, salty chicken in the same bite as the soft and chewy donut, and that honey butter–I could drink the stuff!  Totally. Incredible.  Wait til you see what other donut-inspired treats I have up my sleeve!!

Have a happy Monday!