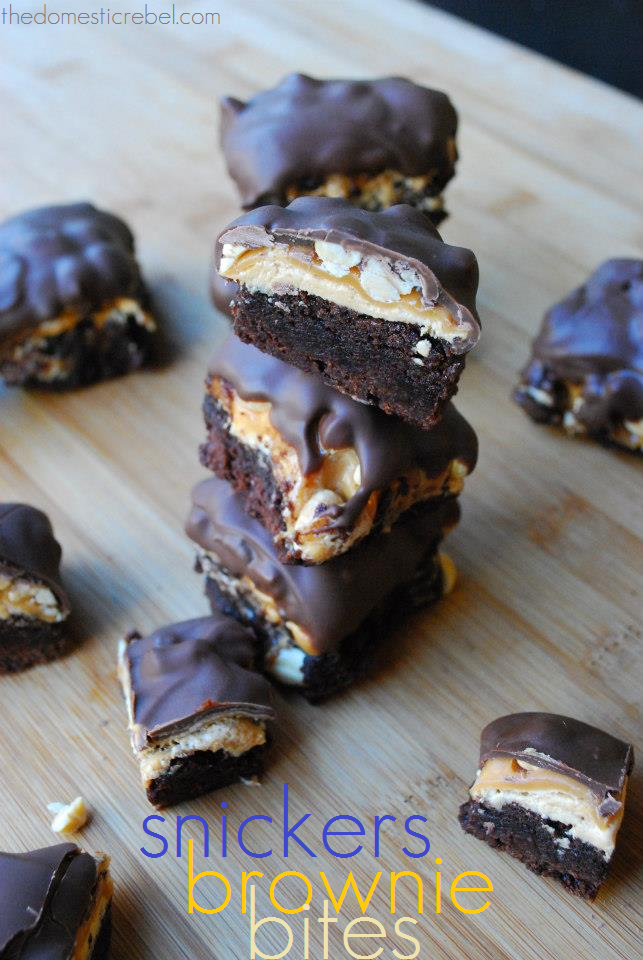 Honesty is, by far, one of the most important qualities in a person if not the most important. People already know this. They already want this. It shouldn’t really need to be established since it’s kind of a given, you know? No one goes around saying “I look for shady crook activity in a man–someone who I cannot trust with a paperclip, much less my life.” It’s just not happening, people.

Anyway, I was always peeved by people who boasted they were “totally honest” and would “soooo tell you if you had like, food in your teeth.”

Those people are LIARS. Filthy liars.

Because honest people do tell you if you have food in your teeth. “Totally honest” people do not. In fact, those are the same people who go completely on about their lives when you flash them in a Safeway. Yes, this happened.

I was picking up some extra baking accessories at Safeway the other day on my day off, so naturally, I was dressed up in a cute mint-colored tank top that buttons down the front. As I gleefully strolled through the aisles stocking up on brownie mix and pecans (that recipe later this week), I was blissfully unaware that my adorable shirt had turned into an X-rated one and I was flashing the store.

Apparently, unbeknownst to me, three of the middle shirt buttons had unbuttoned in my quest for baking supplies and my polka-dotted bra and cleavage were, in fact, exposed. And I went through the checkstand with the cashier just smiling awkwardly at me, walked past an older man who winked at me, and went to the Starbucks inside the grocery store to grab a chai latte and had the barista avert her eyes awkwardly. I chalked it up to the fact I was makeup-less and therefore, probably look like a goblin. But no. My girls were out.

It wasn’t until I got to my car (and therefore, gave the parking lot a lovely show), that I looked down to put my belt on and saw my bra. I audibly gasped and cursed those people in the store who all looked at me and didn’t bother to say anything when clearly, I was unaware that I was being an exhibitionist.

So I came home and stuffed my face with Snickers Brownie Bites. It’s the only thing I could do to make me forget about my days as a grocery store flasher. 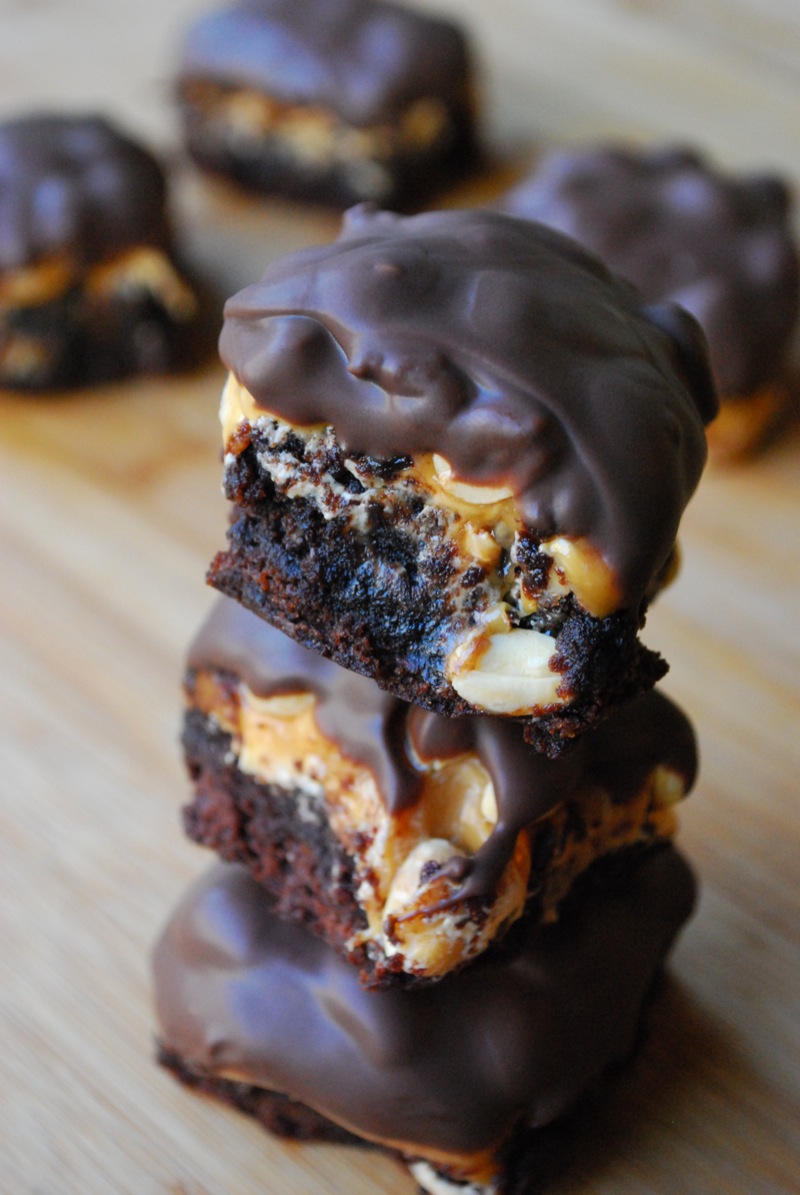 These brownie bites are a force to be reckoned with. A Snickers-lover’s dream, they’re fudgy brownie squares topped with a peanut butter nougat, a thin veil of buttery caramel, salty chunks of peanuts and topped with a smooth milk chocolate coating. They’re divine. 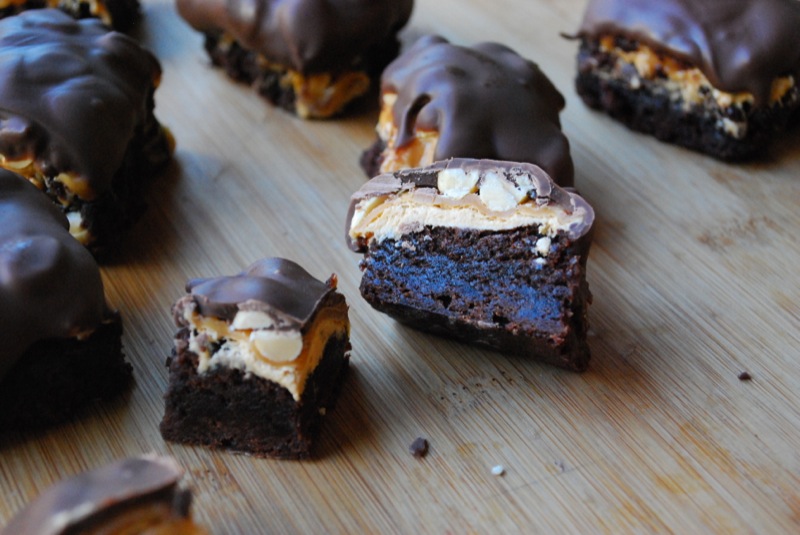 1. Preheat your oven to 350 degrees F. Line a 13×9″ baking pan with foil and spray lightly with cooking spray. Prepare your brownie mix according to package directions and pour into the prepared pan. Bake until a toothpick inserted in the center comes out clean per the directions on the package. Cool the brownies completely.
2. In a medium bowl, combine the marshmallow fluff + the smooth peanut butter with a rubber spatula or hand mixer until blended. Spread the fluff mixture on top of the cooled brownies in an even layer.
3. Microwave the unwrapped caramels in a medium bowl with a splash of heavy cream for 1 minute. Stir, then heat for an additional 30 seconds or until melted and smooth. Spread the caramel layer on top of the fluff nougat layer evenly. Immediately sprinkle on the peanuts and press them gently into the caramel. Pop the brownies in the fridge for about 30 minutes to set.
4. Melt the Candiquik according to package directions until smooth. Using a sharp knife sprayed with cooking spray, cut the brownies into 1″-2″ sized squares. Dip the tops of the squares in the melted chocolate, allowing excess to drip off. Place on a foil-lined baking sheet to set. Repeat until all the bites have been coated.
5. Store the bites airtight, at room temperature, up to 2 days. 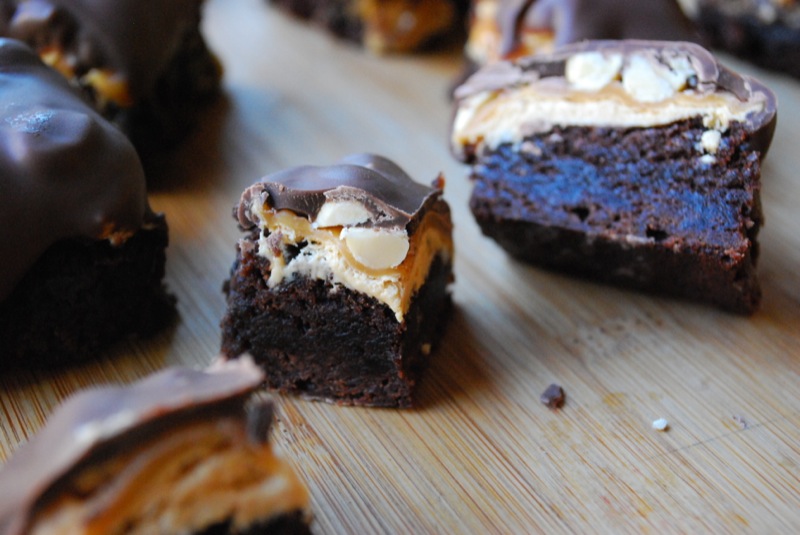 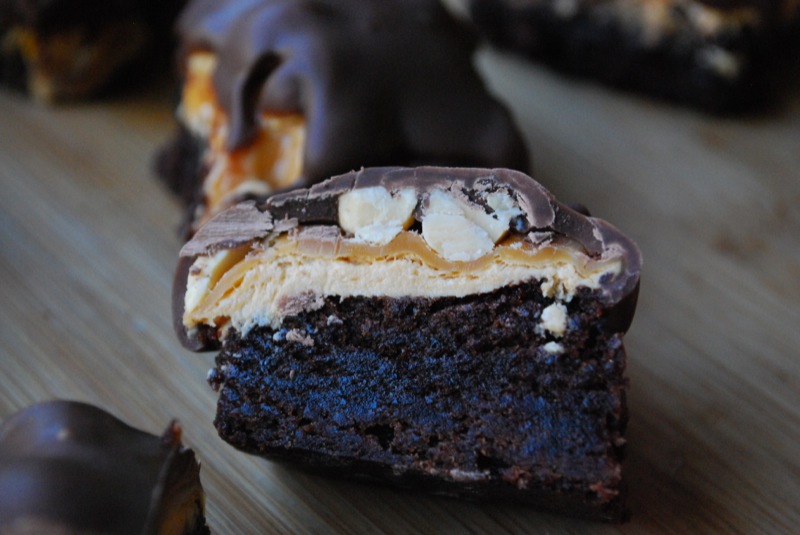 So many of you know Snickers aren’t typically my candy bar of choice. I don’t know why, but I’ve never really cared for them too much. However, these brownie bites didn’t last a minute on my plate. I gobbled ’em up as if it were my job. They’re so gooey and delicious, like a soft and chewy Snickers bar. I love them, and if you love Snickers, you will too!