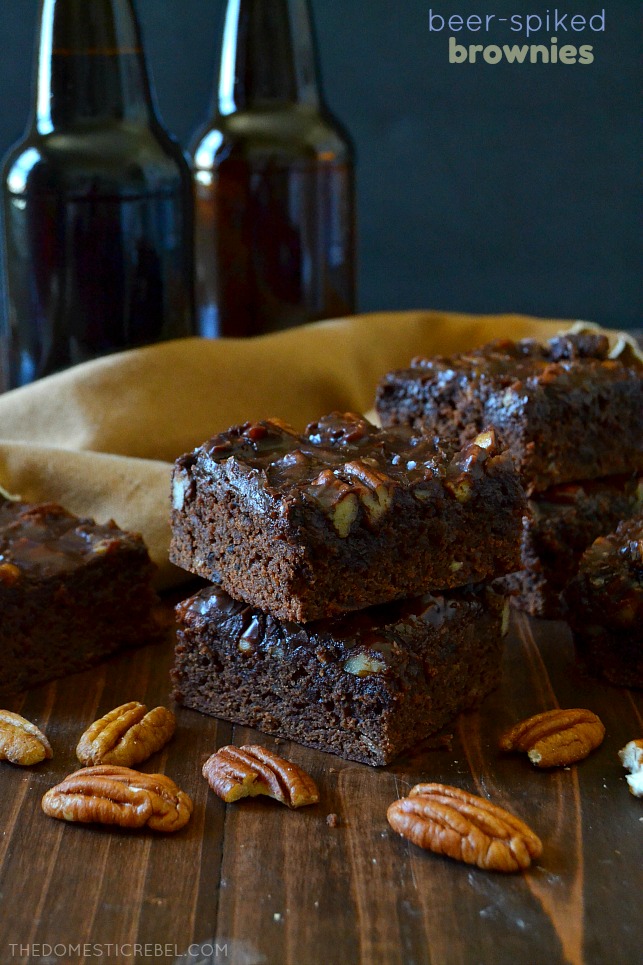 These Beer-Spiked Brownies with Poured Pecan Frosting are a dream come true for any beer and chocolate lover! Made with sumptuous brown ale, they have a moist and fudgy crumb and a delectable sheetcake-style poured pecan frosting!

Hi! We’re in the home stretch for the weekend and I cannot be happier about it! Even though this was only a four-day work-week, it still felt like the longest week EVER. Anyone else with me?

This weekend I’m going to my friend’s wedding in Sonoma, I come home Saturday, and Sunday is my dad’s birthday. We aren’t doing much as he’s waiting for all-you-can-eat pizza buffet that only happens on Monday nights, so we’ll probably just kick back and hang at home until pizza buffet Monday.

Because pizza buffet is what dreams are made of.

And then shortly after that is Father’s Day weekend! Again, no plans really – my parents got the crap end of the stick when it comes to birthdays and parent day-weekends a few weeks (or sometimes the same day as, in my mom’s case) apart. Does anyone else have a parent whose birthday is near Mother’s/Father’s Day? If so, do you go all out for both? I kinda feel bad but we’ve always put more of the focus on the birthday itself and just did a nice brunch or something on the Mother/Father Day. Don’t blame me, blame my grandparents for having a girl in May and a boy in June!

But lest you worry about my parents being severely mistreated and underappreciated, I’ll have you know that I regularly celebrate them by bringing them some of my treats unexpectedly, or planning little dates with them out and about on the town (usually to HomeGoods or Nordstrom Rack).

And I *may* be bringing my Dad these Beer-Spiked Brownies with Poured Pecan Frosting soon, so don’t you fret! He’s definitely appreciated and will definitely love these!

I actually saw the recipe for these brownies in an older issue of Food Network magazine and had to make them before Father’s Day! What guy doesn’t love beer and chocolate? Combine the two and you have a serious culinary match made in heaven.

Brown ale is used because it is richer, more complex and has more of a nutty, caramel flavor profile which pairs perfectly with chocolate and pecans. If you’d like though, you can totally use a porter-style beer which would be even more rich and chocolaty. Maybe even try an IPA to lend some hoppiness to your brownies? In my case, I used Lost Coast Brewery’s Downtown Brown to make these and I loved the flavor it gave the final brownies. 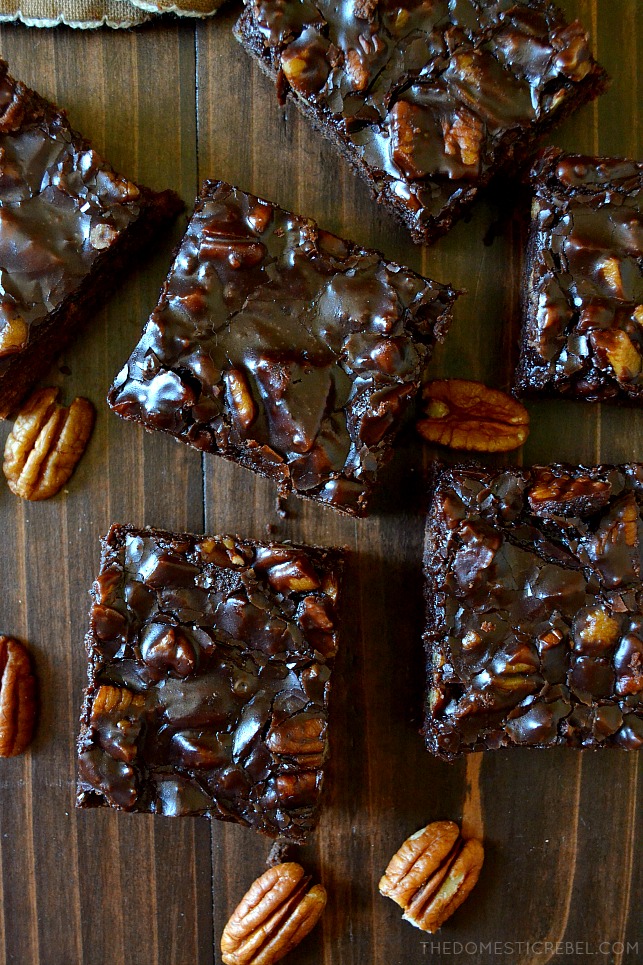 You’ll reduce your beer down some which will cook away some of the alcohol; the rest will bake off in the oven. What’s left, though, is a very concentrated beer syrup once it boils down some. This is where all that flavor is packed! You’ll just stir in the beer syrup into the brownie batter and bake them up until they’re set and ultra fudgy. 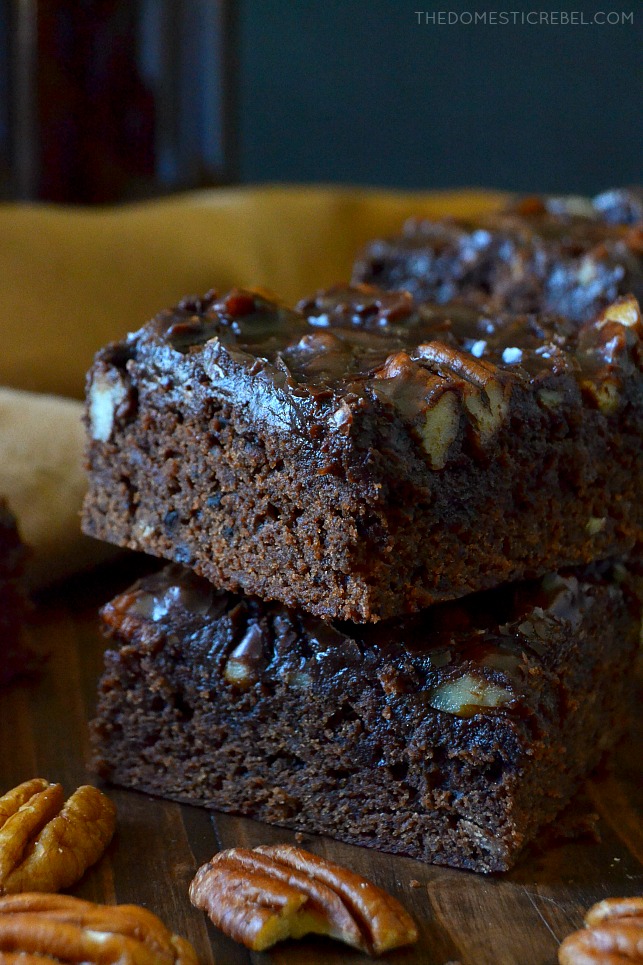 However, to really drive the beer-flavor home, I brushed some beer on top of the brownies after they came out of the oven. YUM. And then while still warm (which is why I LOVE this recipe!), you top it with the poured pecan frosting. If you’ve ever had a Texas sheetcake or similar, you know the poured icings are the best – they melt-in-your-mouth and are so buttery and divine. This one has pecans for crunch.

So whether you’re a dad or not, everyone will love these perfectly fudgy tipsy brownies! 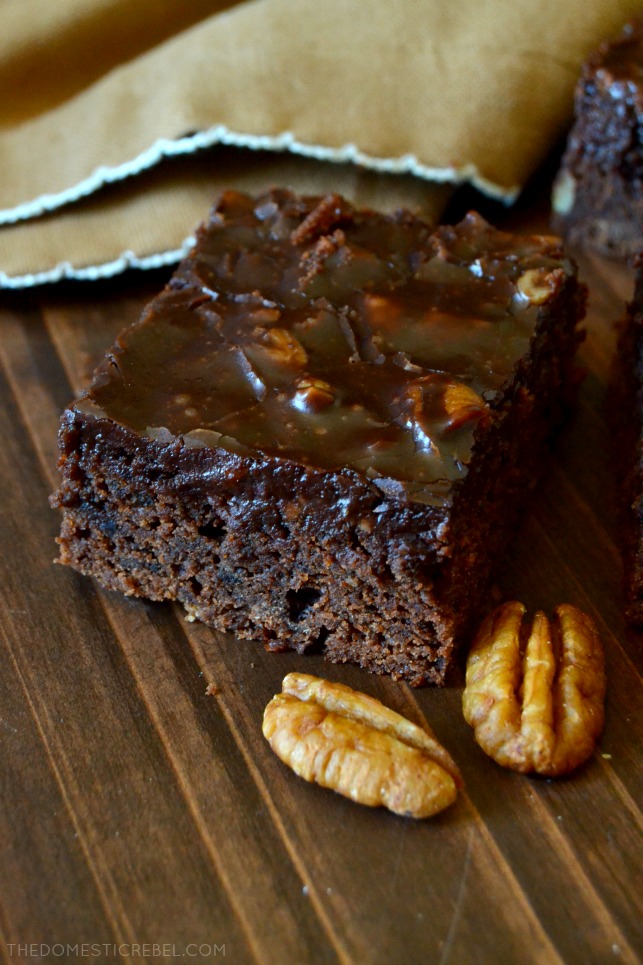 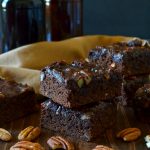 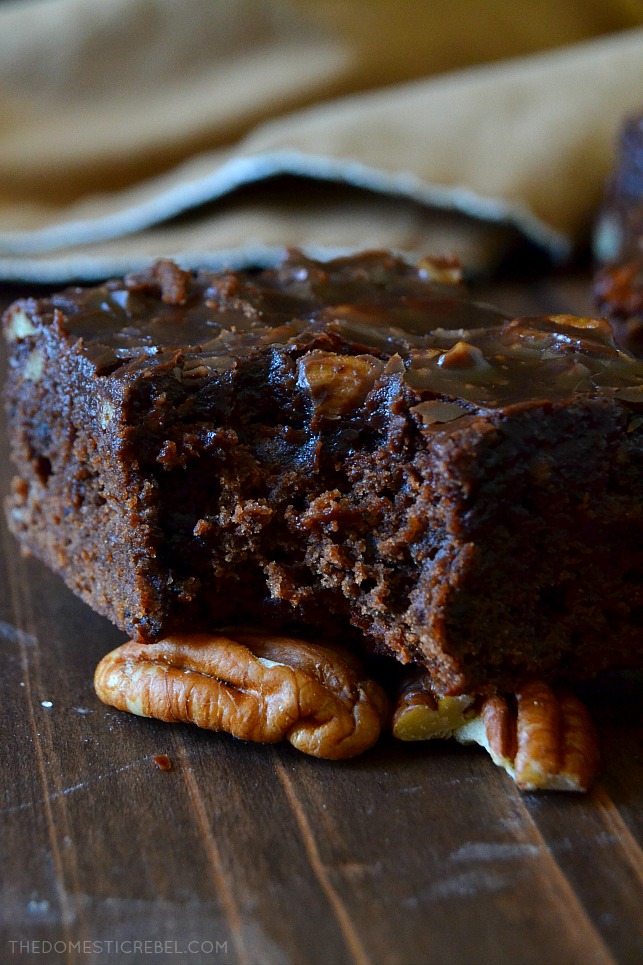 You are going to flip for these ultra fudgy, beer-spiked brownies!