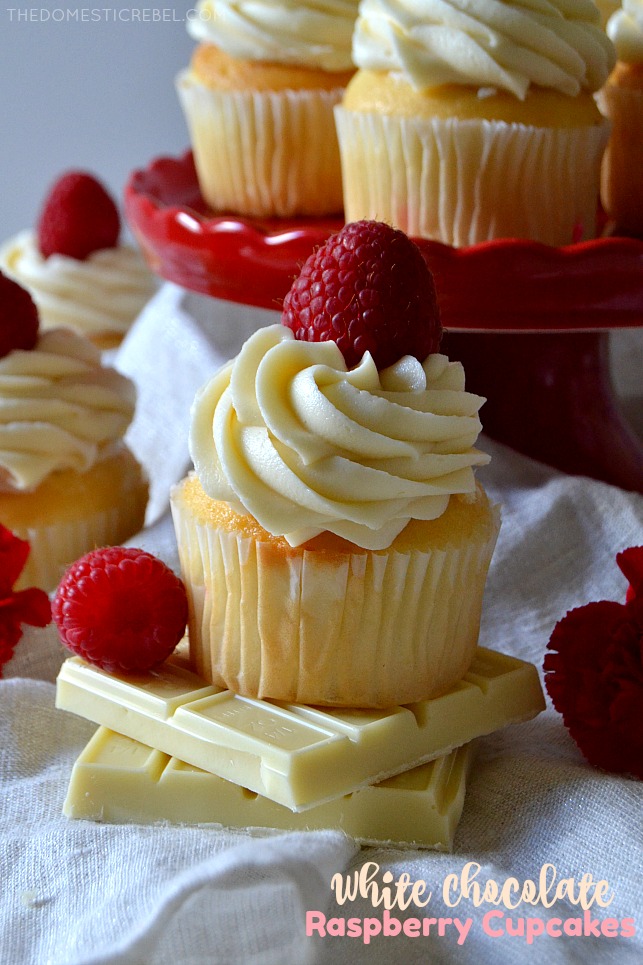 So this will be yet another Valentine’s Day that I’m single… but before you comment some platitude about how I’ll find a guy, I’m honestly okay with it!

Being single on Valentine’s Day is maybe devastating for some people in Hollywood movies, or if your crap boyfriend dumps you the day before… but for those of us who have been single, it’s usually kinda just a day where we can watch bad rom-coms on the Hallmark Channel and binge-eat whatever we want. Lobster dinners are cheaper for 1 than they are for 2 people, and we don’t have to share our box of chocolates!

Sure, having a companion is cool and all, as are rose petals strewn across the bed and floor. But like… about those rose petals. Do you just vacuum them up when you’re done? Wouldn’t they clog the vacuum like dryer sheets do? Do you extend the experience for like a week until you’re crunching a bunch of dead flowers? And then when you move out a year later, you’ll probably still be finding fossilized rose petals under every piece of furniture, right?

I mean the whole thing just seems kinda messy and dramatic, and I really don’t think a 5-minute impression of romance is worth it when I later have to stick my entire forearm into a vacuum canister to dislodge dusty flowers. But hey, if that’s romantic to you then to each their own.

Since this’ll be another year single, I’m going to spend it how I want: ditch the rose petal/vacuum battle and instead drink some Midori Sours in a big ol’ bubble bath. And preferably feed myself these White Chocolate Raspberry Cupcakes, because they are hella romantic. 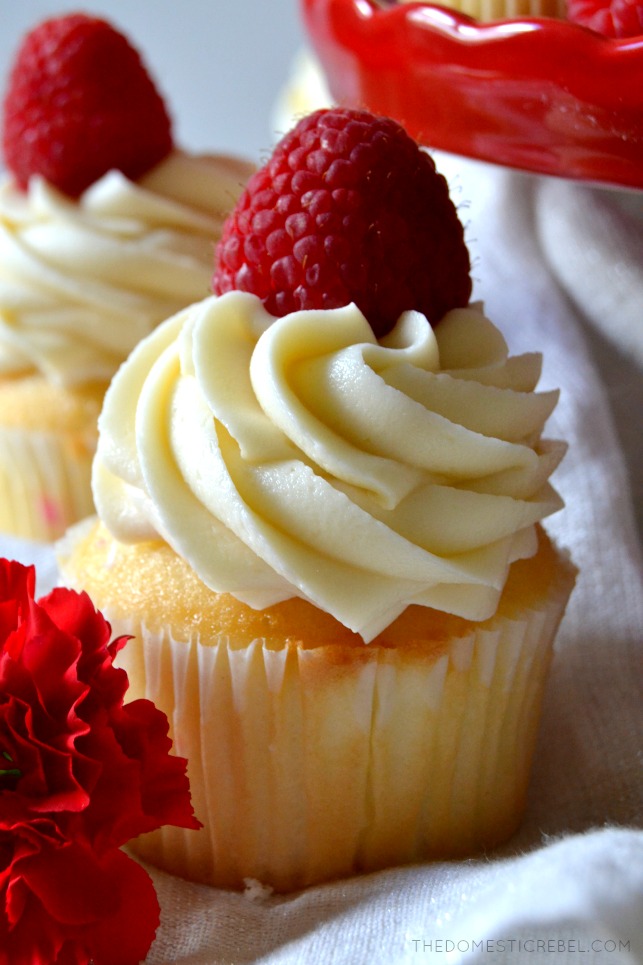 I just adore white chocolate + raspberry flavors so much. There’s something so intoxicating about sweet, mild white chocolate paired with tart and tangy raspberry that is so beautiful; like soul-mates! I wanted to create a delicate cupcake that showcased both of these flavors prominently so you could get the whole ~experience~ of eating both at the same time.

The cake is simple: a vanilla cake mix that I added some white chocolate instant pudding mix to. This just kind of gives a subtle white chocolate undertone to the cake base. If you have a homemade vanilla cupcake recipe you like, use that instead! This is about easiness! 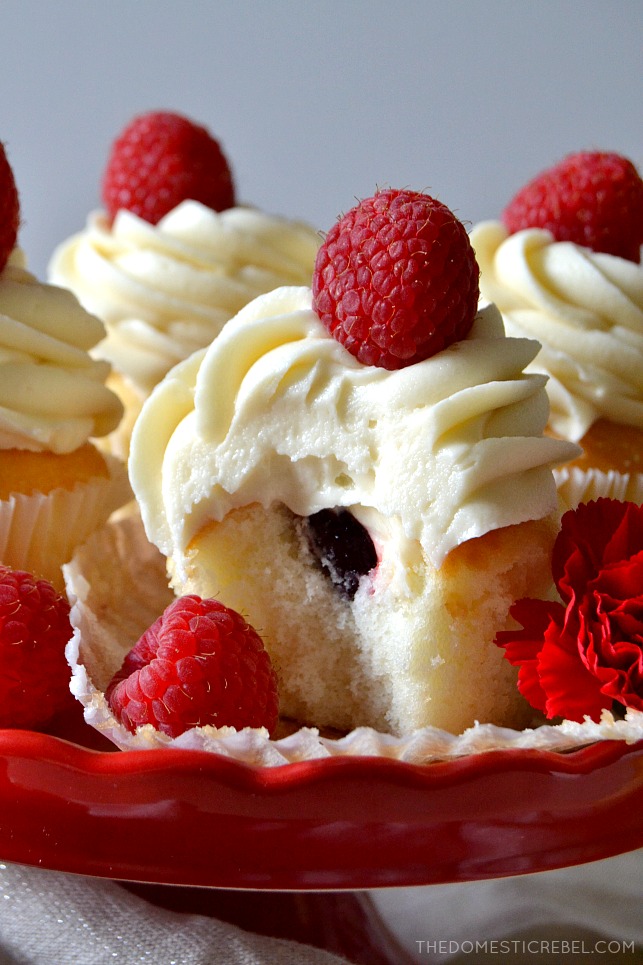 Bake ’em up until they’re nice and pretty and let them cool. After they’re cooled, core them with a cupcake corer or a handy dandy paring knife. You can eat the innards like I do, or discard them if you’re a heathen. Fill the centers with raspberry jam – I like seedless best – and then top them with a sinfully delicious white chocolate buttercream. This is what really amplifies that white chocolate flavor! 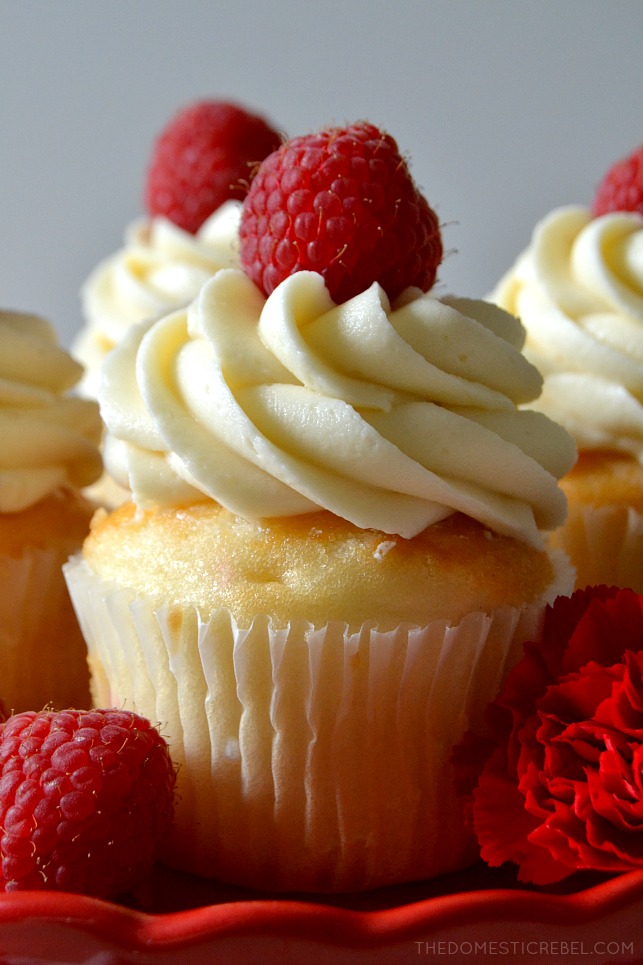 The buttercream starts like any other – butter and vanilla, of course – but you add a bar of melted white chocolate to the mix which makes it ultra creamy, super silky and totally rich. Then just add in some confectioners’ sugar to thicken it up and pipe it high onto these beauties. Note that if you choose to pipe it really high as shown, you may want to double the recipe.

Prepare to swoon without the use of rose petal detritus! 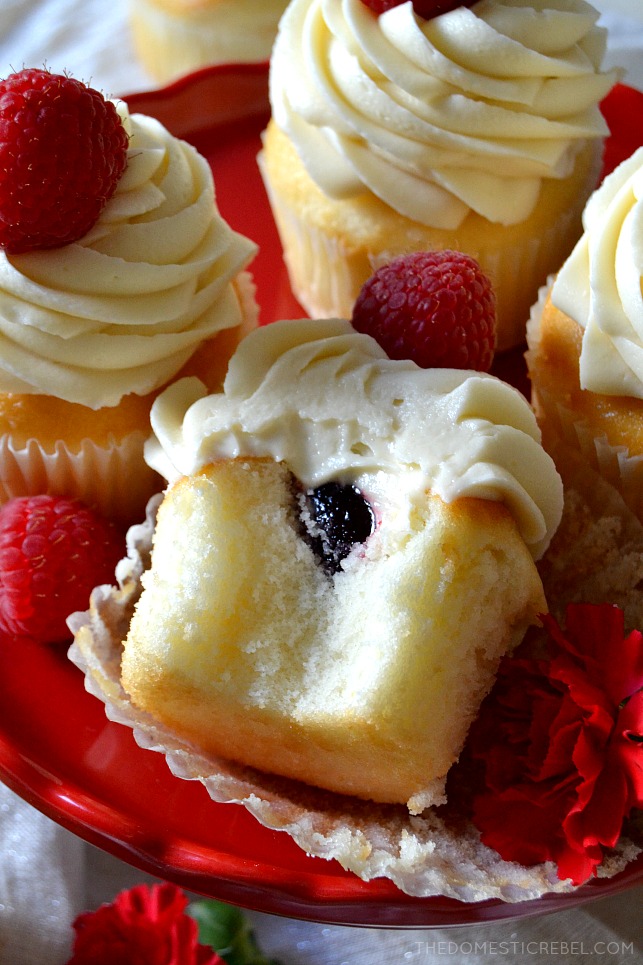 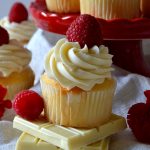 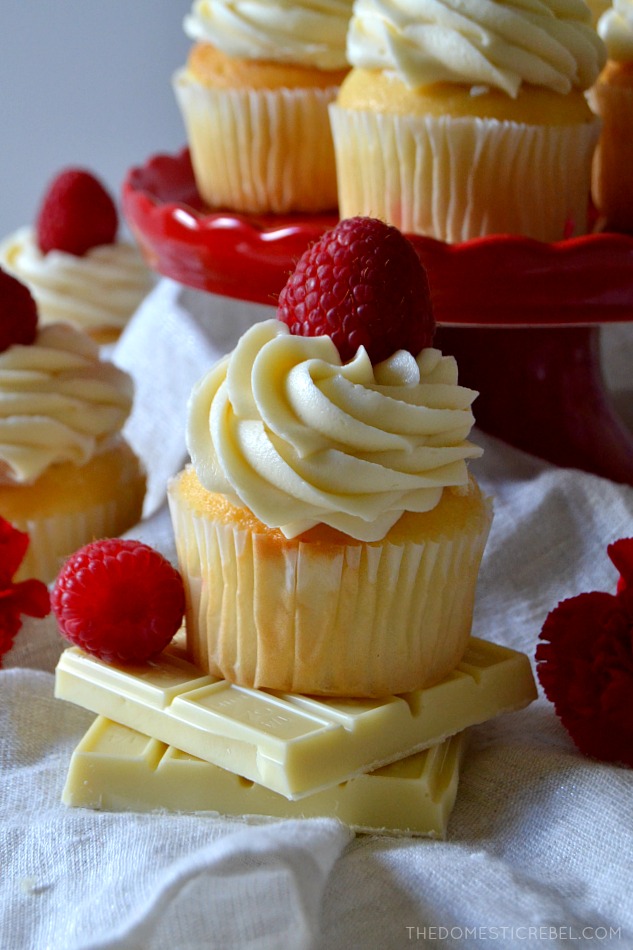 Moist and tender vanilla cupcakes with a mountain of creamy white chocolate frosting. There’s not much better!