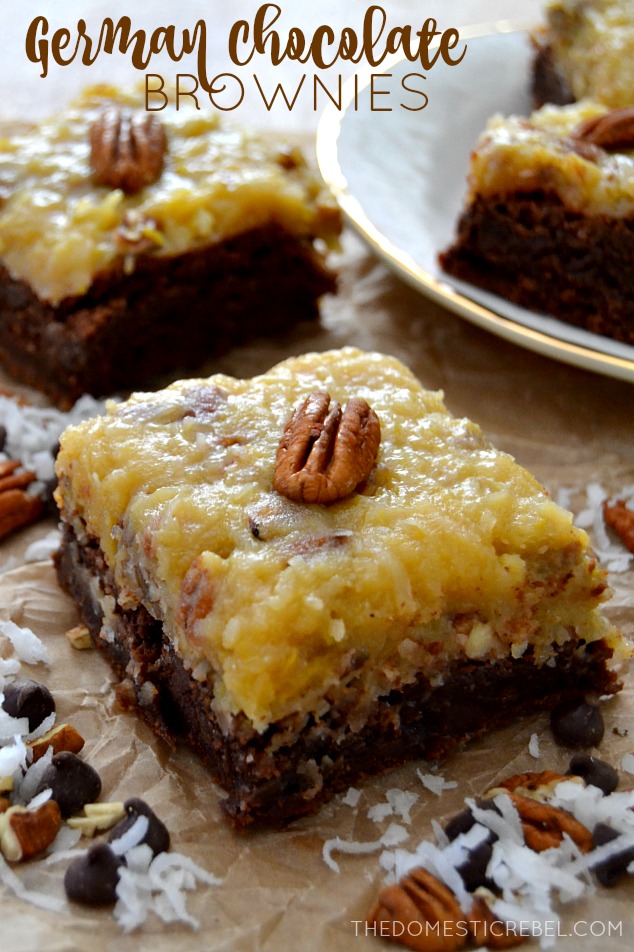 If you look up ‘fudgy’ in the dictionary, these brownies would come up for sure.

I only had tried German Chocolate Cake in college. I suppose my family is incredibly boring in our cake choices and we only ever had chocolate or Funfetti to choose from. When I grew up, it was like a whole new playing field with cake flavors. I know this sounds like I lived in a bunker, knowing only the sprinkles in the Funfetti mix, but I promise I was a member of society, albeit an awkward teenager at that time.

When I had it, I served it for my Food & Culture college class when I was presenting on Germany. I mistakenly thought German Chocolate Cake had to come from Germany. Um, HELLO. But little did I realize that it isn’t German at all. I’m more German than German Chocolate Cake, and I’m barely German. It’s actually very un-German.

Instead, I should have served Black Forest Cake which is German. Although I did give the class braunschwieger. If you don’t know what that is, consider yourself lucky… unless you like hot dogs, because it honestly tastes like hot dogs. My grandma used to give it to me all the time on saltine crackers and I gobbled it up. If I’d known it was liver, I would have balked… but call it ‘hot dogs’ and any kid would flip.

Unless you’re one of those kids who eats like, beet puree. Then I simply don’t trust you.

But the fact that German Chocolate Cake is an imposter didn’t halt my love for it. There’s something so intoxicating & delicious about that gooey coconut pecan frosting paired with the chocolaty cake. That’s precisely what gave me the inspiration for these Ultra Fudgy German Chocolate Brownies. They’re the fudgiest little suckers you’ll ever eat short of eating actual fudge, and they are topped with a glorious coconut pecan frosting that could honestly just be eaten with a spoon.

The brownies start with my Best-Ever Fudge Brownies recipe which produces really thick, ultra chewy brownies packed with chocolate flavor. In fact, there is a full pound of chocolate in the brownie recipe. I meeeeeann..

Then you top them with that coconut pecan goodness. It starts with some sugar, butter, evaporated milk and egg yolks which are boiled and stirred for exactly 12 minutes. Don’t ask me why; it’s just the nature of the beast and no one questions beasts. Like why Two and a Half Men is still on the air and why tourist men wear socks with sandals, some things we’ll never know… including why it takes precisely 12 minutes to complete. How’s that for your scientific answer? 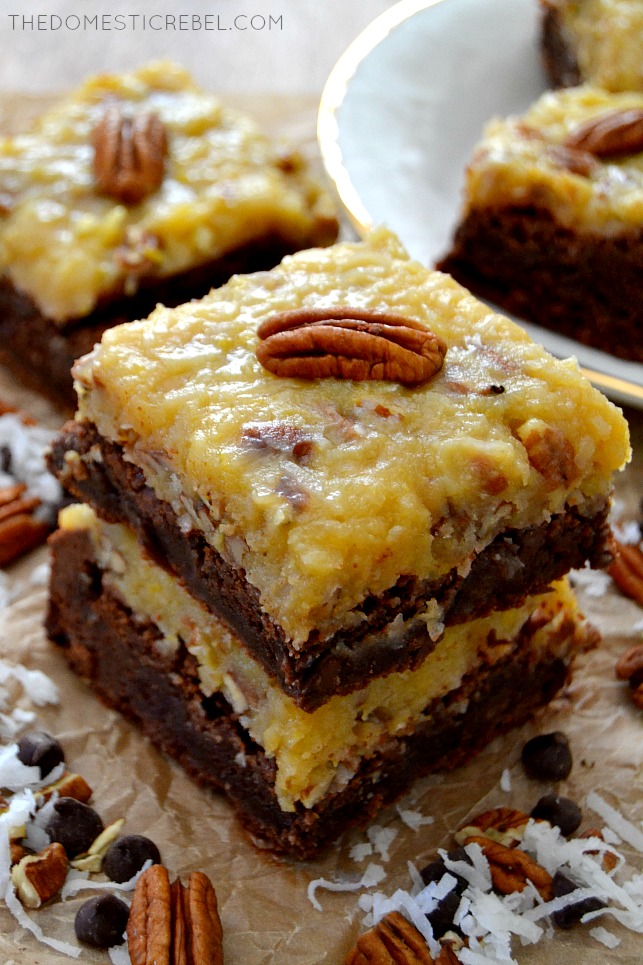 Once the frosting is done, stir in some pecans and coconut – necessary add-ins for the traditional frosting. Then spread the whole mishegas on top of the brownies, cover it up with plastic wrap, and refrigerate it for a couple hours to set. Once it’s all settled, cut it into bars and eat that goodness up as if your life depends on it!

By the way, I got an A for my Germany presentation, but I’m giving myself an A+ for these brownies. 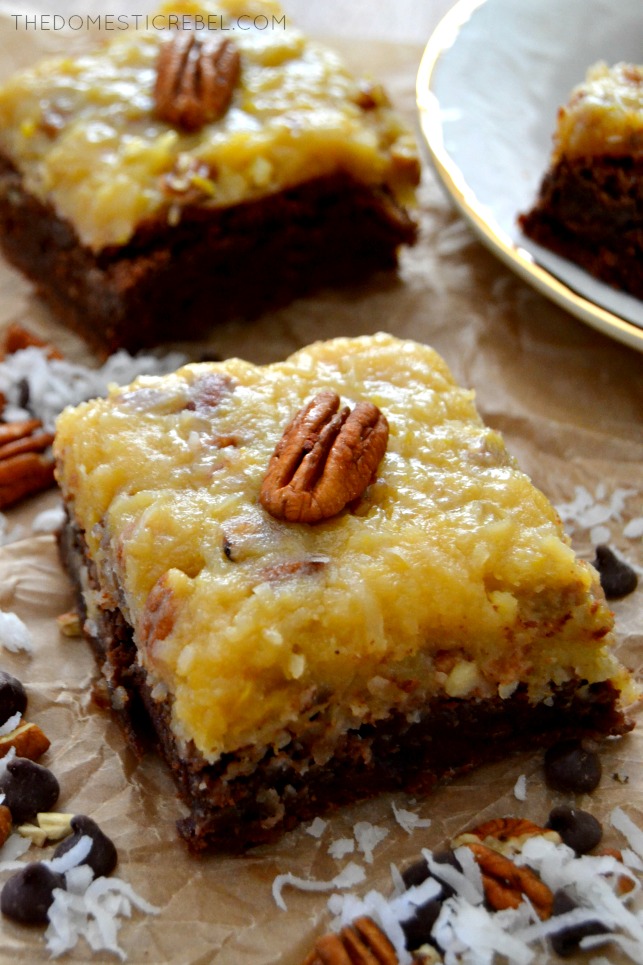 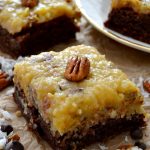 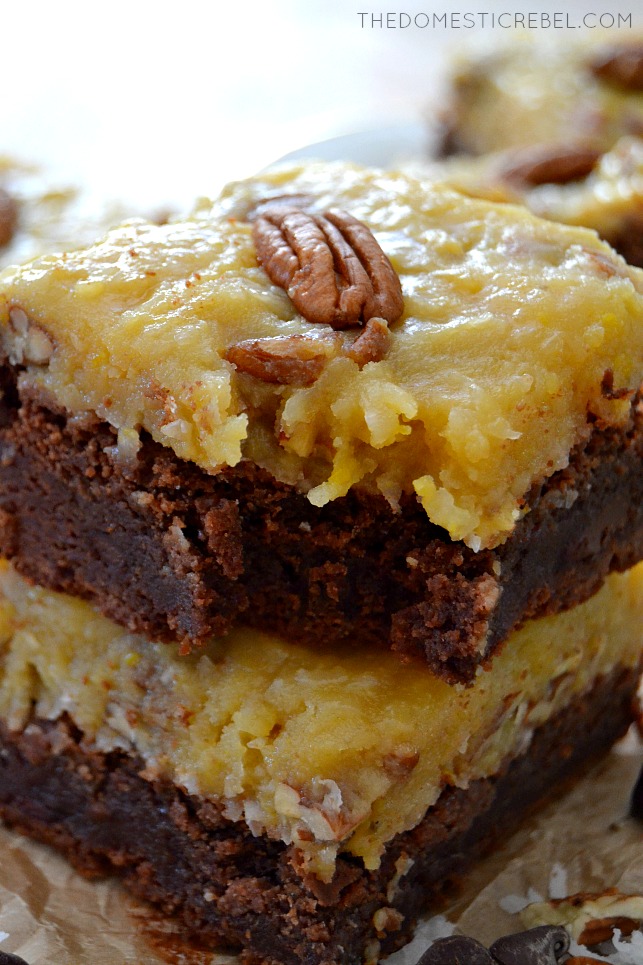 Fudgy, chocolaty and dense with that lusciously gooey coconut pecan frosting on top… there’s nothing these brownies can’t do!