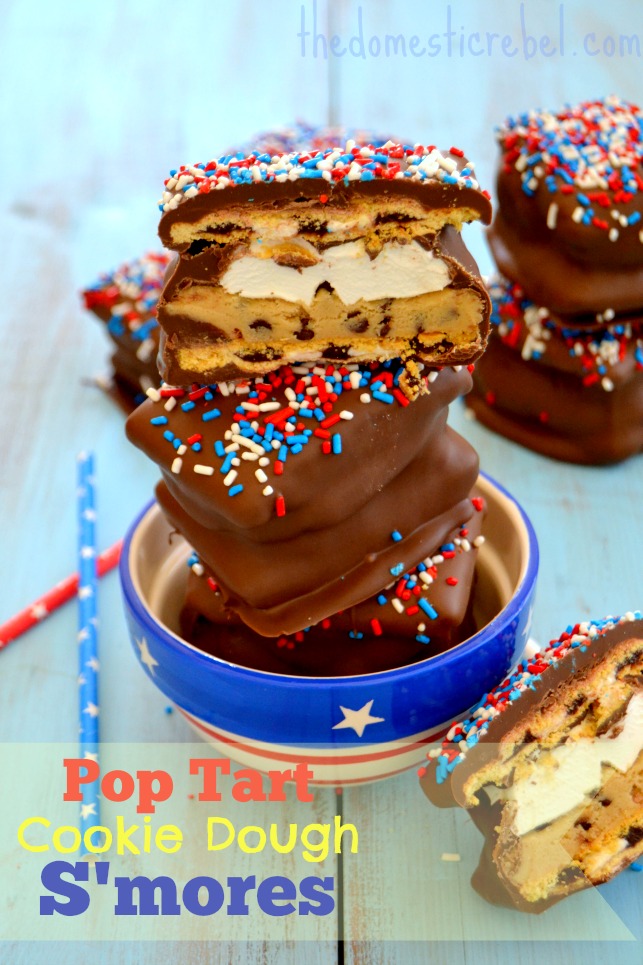 I really envy all of you who are no longer in this cruel, harsh world of dating.

If I had to compare the dating to world to something, it would probably be District 12 in the Hunger Games.  Vastly insipid & just downright terrible.

So a few days ago, I posted on my personal Facebook, recruiting friends to tell me the romantic stories of how they met their husbands/wives/SO’s.  My inbox was flooded with adorable stories while I tried my best to convince myself love was real after another lame date with a dud.

And then, I got a message from a guy whom I’d been Facebook friends with for awhile.  I don’t know why I initially added him; he was friends of friends and I’d never met him, so I was shocked he had personally messaged me.  He confessed he’d been having dating trouble, too, and thought we should get together since we’d probably have a lot in common.  I agreed, so we began texting.  Turns out, we had a ton in common which totally blew my socks off.

We spent all day asking each other personal questions to get to know each other better.  He confessed he hated liars and cheaters since he’d been cheated on before (as do I) and liked food (as do I) so I pretty much knew we’d like each other.  We made plans to meet up for ice cream the next day.

SO you can imagine my shock when perusing his Facebook page (hey, we’re friends, first of all, and second of all, I wanted to refresh my memory as to what he even looked like), I noticed at the top of his wall a picture of him and this cute blonde girlie posted a day earlier.  In her comments she proclaimed they’d been official for a month and he was her new man.  Interesting.

I figured I would let this boy know that there was a rather cute blonde on his Facebook who seemed to think they were officially a couple, so I did — to which he replied, “I know this, but we aren’t official yet.”

Um, exsqueeze me?  A baking powder?  Aren’t official yet?  Aren’t official?  Really?  Because it seems to me this young lassie thinks you two have been official for about a month now.  Still not knowing all the details, but also feeling very uncomfortable dating someone who has a random chick longing for him on the other arm, I told him hanging out probably wouldn’t be the best idea right now.  He said he understood, and that was that.

Fast forward to when I get home, and this pathetic piece of trash has blocked me on Facebook.  Straight-up blocked me.  For what?  Calling him out for being a loser?  Because I didn’t want to get ice cream with him while he was currently a BOYFRIEND to someone else?  What a freaking loser, right?

Not to mention, he kept overusing my name (a HUGE pet peeve of mine) in casual conversation and said weird things like how he wanted to “hold me.”  I’m not a baby.  Please do not touch me, strange man.  And do not use my name or tell me you’ll hold me.  You are scary.

So anyways, you can see how I’m extremely envious of those of you who have retired from this treacherous world of online dating since it is just a big clusterf*ck of awful.  I’m sure “the one” is out there and I’ll “meet him when I’m not looking/when I least expect it!” but come on, do I really have to go out with shithead after shithead before I’ll find the one?  And they all seem so normal at first… but then again, Jeffrey Dahmer was normal before he went and ate people.  So maybe I just survived a serial killer, who knows.

Anyway, bad dates + survival require a treat, and I can’t think of anything more indulgent than these delectable Pop Tart Cookie Dough S’mores!  I was walking around the store one day when I spotted S’mores PopTarts and KNEW I had to make something with this iconic, delicious pastry.  Then it hit me: um, duh.  S’mores! 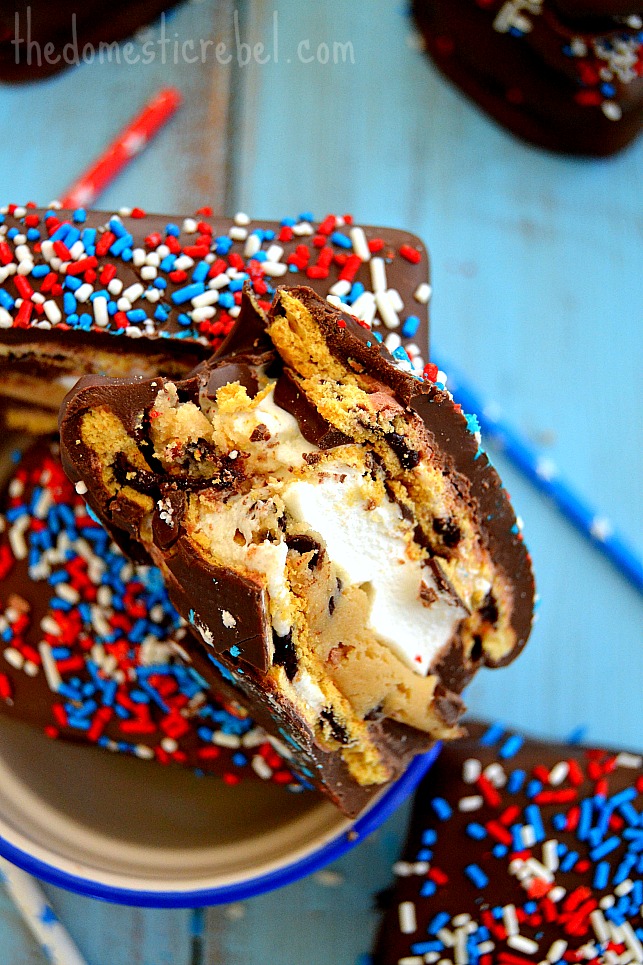 Between each S’mores flavored PopTart is a fluffy marshmallow and a thick layer of egg-free chocolate chip cookie dough, thrown in for extra indulgence.  The entire thing is dunked in milk chocolate and topped with festive sprinkles — perfect for Fourth of July since they’re an American classic and they’re no-bake!  Your family will be requesting these on the daily, so get ready to taste your new favorite treat! 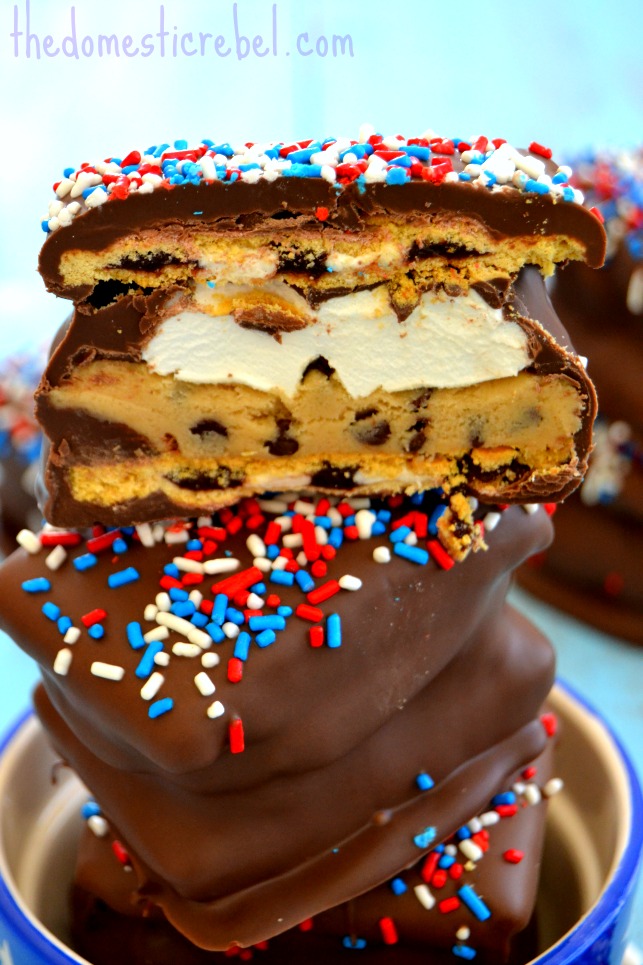 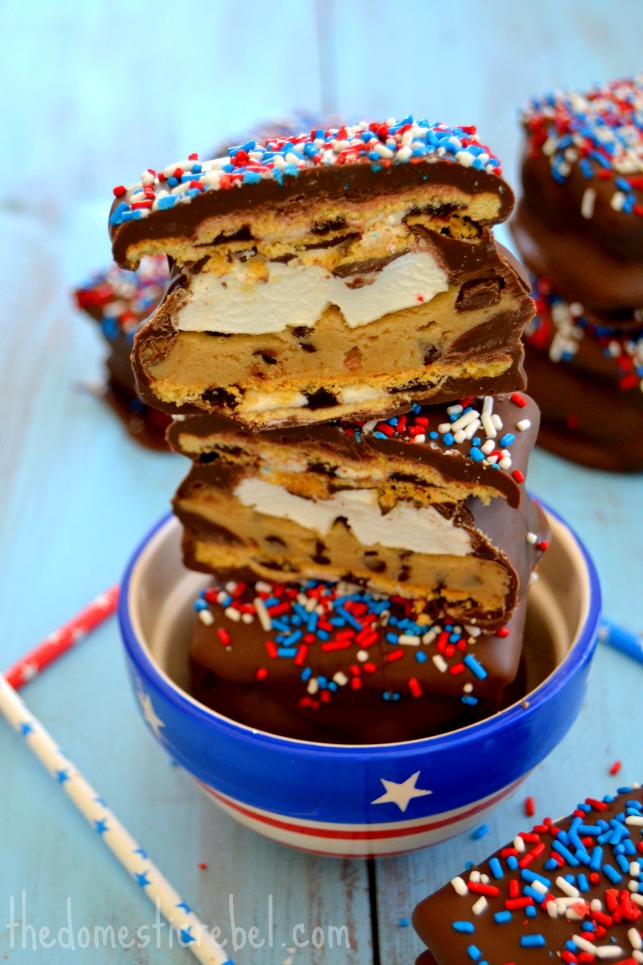 Aren’t they adorable?  SO simple to make and scrumptious, too!  I love the unexpected cookie dough surprise smothered inside of each sweet and chewy bite!  These are huge and quite a mouthful, but lazy summer days deserve decadent, frosty treats and these s’mores are no exception — they’re great frozen! 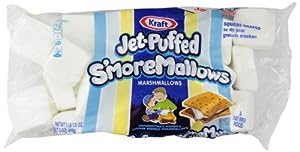 For this recipe, I used Jet-Puffed’s new S’moreMallows, which are puffy square-shaped marshmallows which perfectly fit onto a graham cracker for a s’more!  I loved how they were almost the perfect shape for my PopTart s’mores — that gentle tug I mention in the directions helps stretch them out to fit the area of the PopTart better, ensuring gooey marshmallow in every bite.  If you can’t find these S’moreMallows, consider using Stackermallows (long, narrow marshmallows, great for snacking) or regular marshmallows that have been halved or pressed so they lie flat within the s’more and don’t roll around.  You can also try different flavors of PopTarts or cookie dough to suit your tastes!