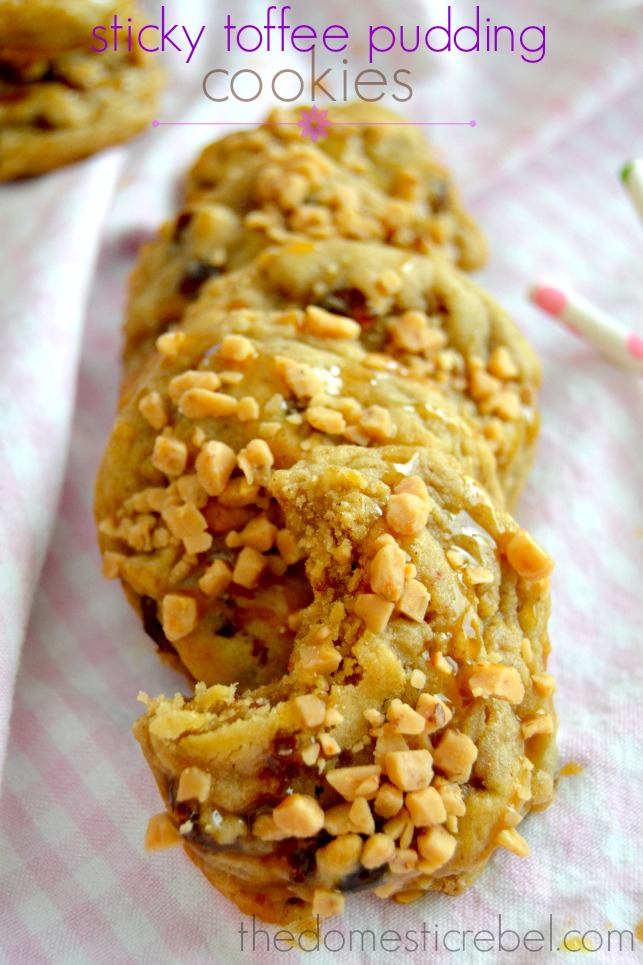 So as you know, I’ve been doing the online dating thing for awhile now.  And in this short time, I have come to figure out some key things guys should NOT do when it comes to dating sites and the photography they choose to portray themselves.

Seriously, if I had a dollar for every time I actually saw a decent picture where I actually KNEW what the guy looked like, I would probably be making $3 a day and would spend it on Kleenex to cry myself to sleep.

So here’s my list of Photos Men Should NOT Post On Their Dating Profiles.  Guys, take note.

The No-Face is a simple guy… with no face.  His pictures include him in situations in which his face appears partially or entirely missing from his head.  There are many sub-divisions of No-Face, including but not limited to: Over-Exposure No-Face, the guy who takes photos directly IN the light, casting a very bright, very opaque white glow over his features so it just looks like eyeballs floating in a stark white orb [aka, hotness]; Halloween No-Face, the guy who wears a mask as his profile picture [seriously] and you can’t tell why he purposefully chose a picture of him in which his face is covered — and that is must mean he has some kind of facial deformity or facial-flesh eating virus; Outdoor No-Face, which is the guy who has sunglasses, a hat, or some other object on which obscures his face from actually, well, having a face.

Everyone’s guilty of taking a selfie here and there — we are human.  But the dude who has ONLY selfies up on his profile is to be approached with caution.  Does he have friends, and if so, why doesn’t he have any pictures with friends?  Every picture is an up-close, blurry shot of his face — usually taken from an extremely unfortunate angle which makes his probably-okay-looking head look like a giant toe with eight chins [side note: don’t ever take selfies from any angle below the chin.  DOOOOON’T].  If you’re going to take a selfie, please follow these simple rules: A) ask a friend to take the picture instead, preferably in a background that isn’t your dirty bathroom; B) don’t take any shots from below your chin or risk looking like you have no neck; and C) would it kill you to smile?

This dude clearly needs to be reassured that he is the bomb.com ALLL the time.  Case in point?  His profile picture is likely of him posing in the bathroom mirror with his shirt off.  It’s quite possible his abs make Ryan Gosling’s stomach look like a 89-year-old woman’s.  But even if that’s the case, keep it wrapped up, brah.  If you’re the right guy, when the time comes I’m sure we will get to see your delicious abs.  Otherwise, if we’re bombarded with half-naked dudes, we’re just gonna bypass.  This goes for guys who take selfies or ‘swolfies’ at the gym, too.  It’s great that you work out — go, you! — but if you’re spending your time snapping pictures of your sweaty biceps instead of actually working them, you’re probably not doing it right.  Neeeexxxt.
Another sub-division of the Macho Man is the dude posing with a car, money, or lots of unnecessary crap in his profile picture.  As much as I love money, I don’t love seeing dudes holding hundred dollar bills, dudes leaning up against cars (that are usually sub-par cars at best), or guys wearing blinged-out snap-backs, pinky rings, or the like.

Mr. Unidentifiable is just that — he is (I’m hoping) one of the eighteen people in this picture, right?  But the question is: which one?  Because more than likely, this social butterfly has more than one picture and all of those pictures are of him in a group.  Inevitably, I always find the best looking guy and upon further snooping, realize that this person is definitely not his attractive friend.  Sigh.  Back to the drawing board.  So dudes, I love that you love your bros.  But can you throw a couple of clear pictures of just your mug on there, too?  That way I don’t fall for your cutie friend instead.  (Oh, and btw, is he single?)
Guys, this also goes for posing with ladies.  I get that you like the ladies.  They may all be your sisters, who knows.  But when it’s you smack-dab in the middle of a gaggle of females, I can definitely spot you alright — but as that douchebag in the middle.

The Non-Human has profile pictures that consist of things that are, well, not human.  Pictures of beaches at sunset, his car and/or motorcycle, his dog, a favorite TV character… you get the drift.  As nice as it would be to date a beach at sunset, it wouldn’t because sand crabs.  And I love animals, but dating a dog would probably be grounds for sending me to an asylum.  Can you even imagine dating a car?  They aren’t affectionate, they’ll never share their feelings with you, and they will constantly have bugs in their grill.  So yeah, I’ll pass.

Anyway, gentlemen of the interwebs — please heed my profile picture advice.  I highly suggest going outside on a nice, sunny day and taking a profile picture from shoulder-height or higher of your smiling face.  You’ll thank me later when you have gaggles of chicks messaging you.  Trust me. 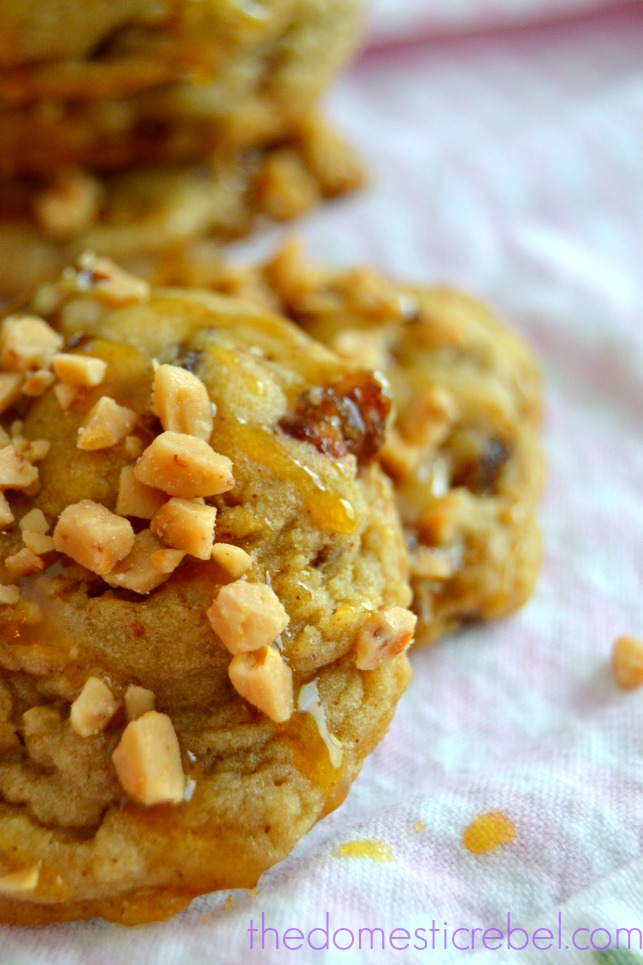 You should also trust me when it comes to these cookies.  I’ve actually never had sticky toffee pudding before, but I know it’s insanely popular, especially in England.  And while I’m not a huge fan of pudding desserts (especially bread pudding) I was a fan of the list of ingredients that makes up a sticky toffee pudding — loads of warm spices, rum and vanilla swirled throughout, and of course, the toffee.  So I took those quintessential flavors of this classic dessert and shoved them into a cookie.  Genius.

Now that’s a match I can get behind. 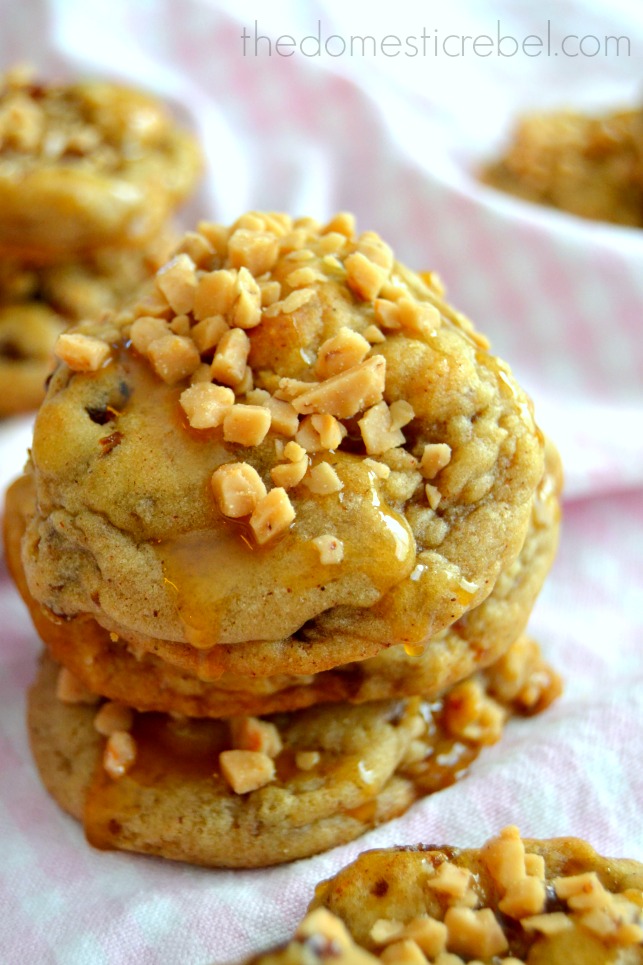 These are some of my new favorite cookies ever!  They are so soft and chewy with a tender, light crumb that’s simply irresistible.  The higher dark brown sugar ratio lends to a chewier, more tender cookie and helps plump up the dried dates to make them extra soft and juicy.  And the reason why the toffee goes on top rather than in the batter?  Simple: I wanted these to be noticeably sticky toffee pudding cookies.  I didn’t want the buttery crunch of the toffee lost within the batter of the cookie, so by sprinkling them on top, that toffee flavor and texture isn’t lost.  Between the crunch of the toffee, the stickiness of the caramel drizzle and the spiced batter swirled with juicy dates, these cookies taste pretty darn similar to the real thing!  I think you’ll fall in love, too 🙂