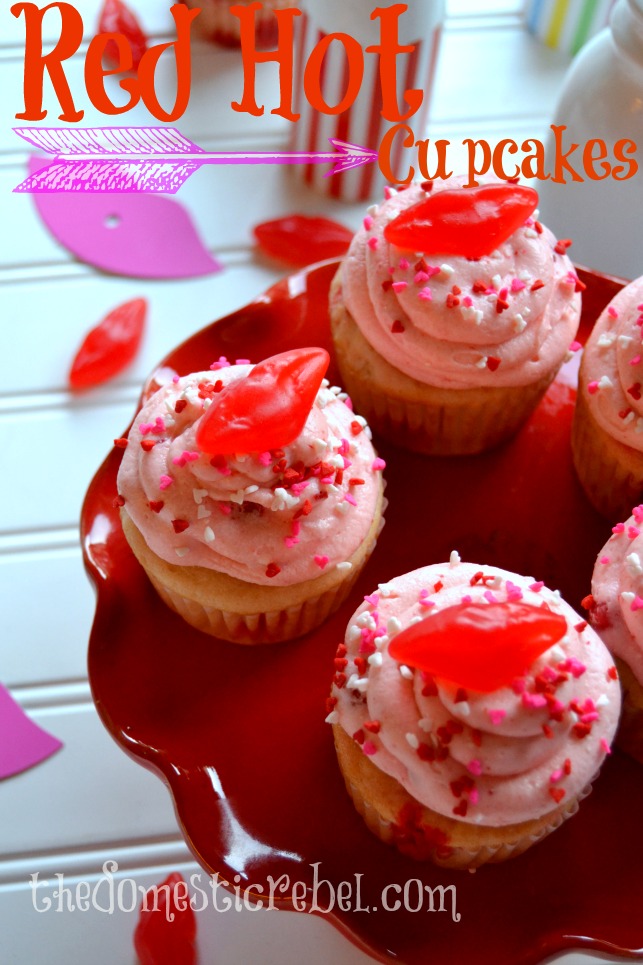 Mannie, my sweet dog, is obsessed with squirrels.  He loves to chase them, bark at them and stare at them.  In fact, anything squirrel-related, he’s all for it.  I never let him off the leash to actually get them, and even if I did, they are way too quick for him.  So we usually admire them from afar.  And then, of course, there was that whole incident when we had a pecan tree in our yard and the squirrels would actually throw the nut shells onto my dog’s head as he barked at them from below… hence his obsession, I suppose.

ANYWAYS.  A few days ago we were walking to the park when we spotted an unfortunate squirrel lying on the side of the road.  And by unfortunate, I mean straight-up dead.  Mannie immediately noticed it and I let him stare at the squirrel’s lifeless, belly-up body for a good few minutes as this was Mannie’s one true chance to be up close to a real squirrel, even if it was dead.  Eventually, I realized if I didn’t tug his leash now that we’d be staring at a dead squirrel for the rest of eternity, so I motioned for Mannie to keep walking.  But no, there was a squirrel present and dammit, he was determined to stare at it until the end of time.

That is, until he somehow gained super strength, thus gaining an inch on his leash by some kind of squirrel-hating miracle and did the unthinkable: he picked that mother-lovin’ dead squirrel up in his mouth and held it like some hopeless rag doll.  Mannie then began spinning in circles violently like some morbid carousel from the pits of hell.

A moment passed before my brain registered that holy shit, my dog is holding a dead animal in his MOUTH, at which point I started screaming bloody freakin’ murder while still holding onto his leash, thus spinning in violent circles with Mannie as my body became entangled in the leash.  We spun for a good few revolutions, squirrel lifeless in mouth, until the end of the leash had come and my knee happened to knock the squirrel out of Mannie’s mouth.  From the trajectory of our spinning, plus the universe’s cruel sense of humor, I basically drop-kicked the lifeless animal.  The dead squirrel ricocheted off of my knee and flew into the street, landing with a part-satisfying, part-horrifying thud.

The worst part of this whole ideal (besides neighbors witnessing my screaming over a dead animal), was the fact that Mannie was so nonchalant about the whole experience and hopped the rest of the way home like nothing morbid had happened just a few moments ago.  Actually, he was probably thrilled to have finally united with his longtime love/enemy and it was then that I realized that despite desecrating an innocent tree animal, this was a good experience for Mannie nonetheless. 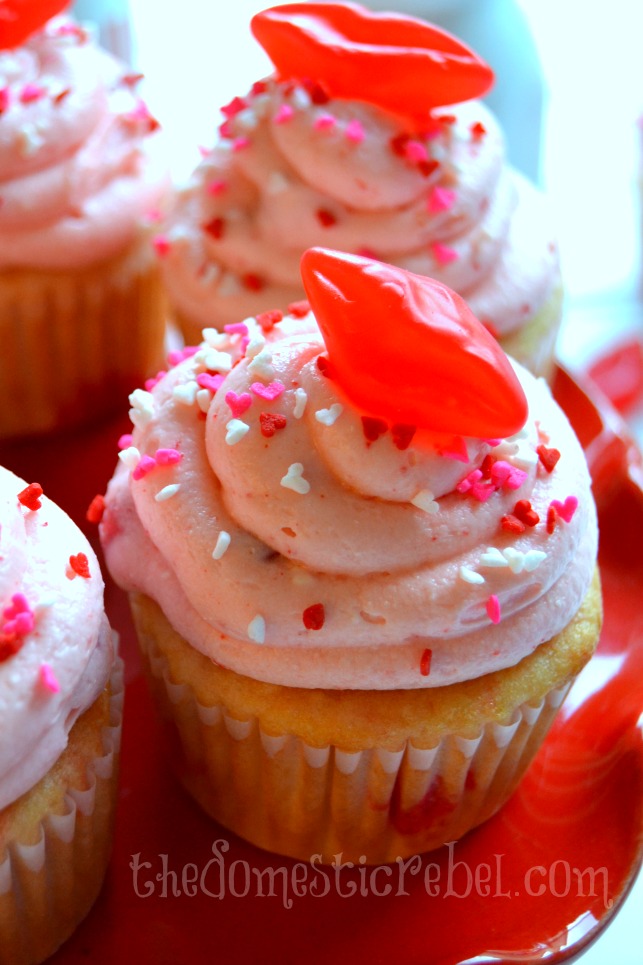 Anyway, naturally this terrible story segued into the recipe for these cupcakes.  Please don’t let the morbid story deter you from making them — they’re truly amazing and perfect for your true love (who hopefully is living and breathing).  If you love Red Hot candies, you’ll flip for these cupcakes!  They’re a redo from a recipe I made years ago and are even better than I remember.  Satisfy your sweet tooth with these sweet, hot cupcakes! 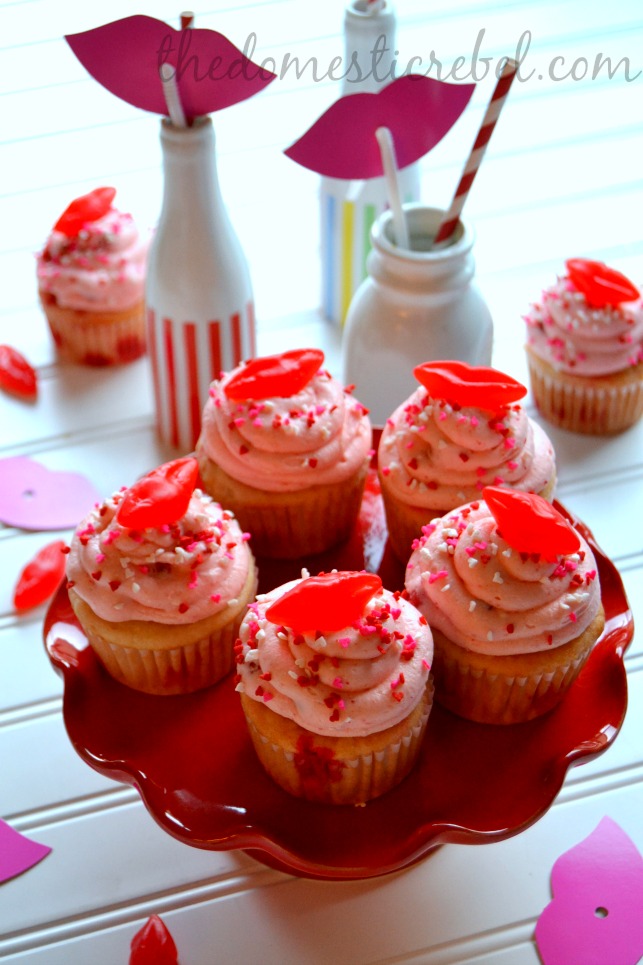 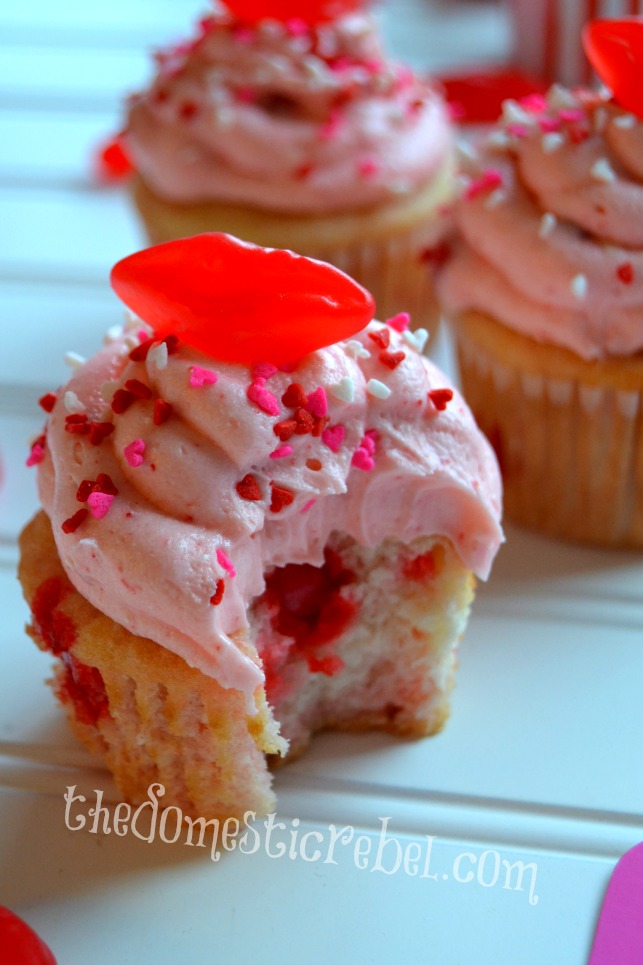 I used to work at a bakery that made a similar cupcake for Valentine’s Day and it was easily one of my favorite flavors!  There’s just something so intriguing about a spicy cupcake topped with a sinfully sweet & spicy Red Hot buttercream.  Plus, I love the little pops of red candy swirled throughout the batter.  These will definitely tantalize and please your tastebuds and your Valentine’s 🙂