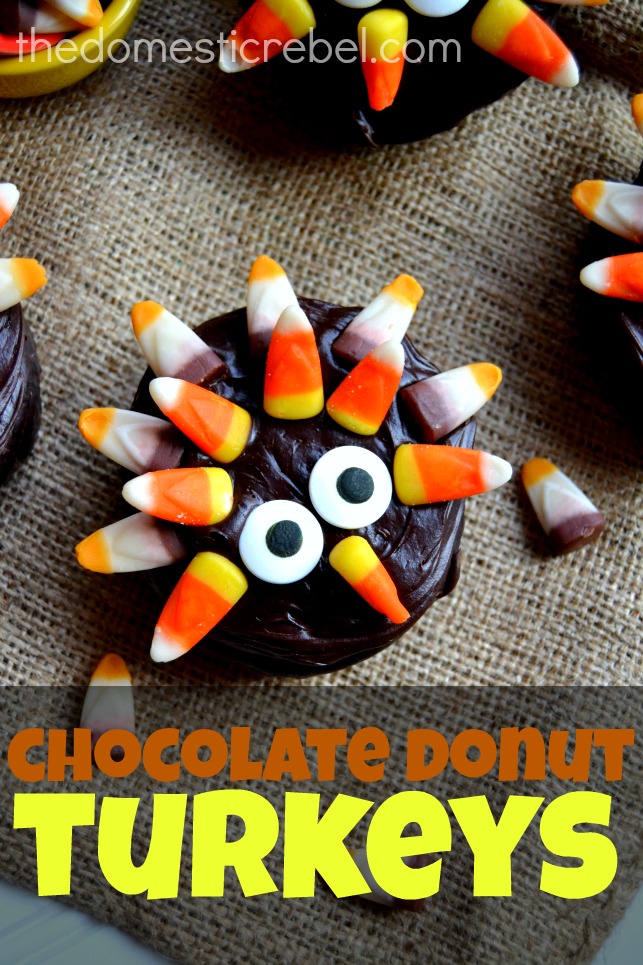 So I’m kiiiiinda in a predicament, guys.

A week ago, I went to the store and bought a couple random things including some soup.  This also happens to be the same soup I have been eating on a daily basis for a week.  Actually, I bought eight cartons of said soup and am down to one carton left.  I may or may not have a soup problem.  Soup problems: they’re a thing, people.

Anyyyywaaays, while I was checking out with my stuff + apocalyptic stash of soup, I happened to have a rather handsome checker.  Like the typical lame-o I am, I made small talk about how the store was busy and tried to distract him from the fact that I must be a weirdo if I was buying eight cartons of tomato soup… which, not surprisingly, probably drew his attention more to the fact that I had an unusually large supply of soup in my cart.

After I walked my groceries to my car, I decided I hadn’t made a fool of myself enough, so I ran back inside with my name and number scribbled on a ripped-up receipt.  I waited in his line until he noticed me again and handed him my number.  I’m sure that either due to the fact that this was an incredibly bold, out-of-character move of mine OR because I have likely eaten seventeen gallons of pureed tomatoes in one week that I blushed insanely red as I handed over my number.

And then, to my complete shock and happiness, he texted me!  He actually texted me!  I was totally dorky with elation until I realized something utterly dark and disturbing.

What if this doesn’t work out?  What if he thinks I’m a psycho or what if we were to date and it ended terribly?  I mean, obviously those things would be awful, but oh my god, that is the only store where I can get my soup.  Like, I hope he wouldn’t think I was stalking him when I go on my weekly soup-trough run.  It’s not you… it’s the soup!!

Because really, I can’t live the rest of my life without this soup, you guys.  It’s life-changing.  And if I just ruined it by being bold and flirty… my heart can’t go on.

Luuuucccckily my insanity hasn’t jeopardized the texting or the soup-shopping, so it’s only a matter of time, I suppose.  In the meantime, I am going to enjoy my soup and these adorable Chocolate Donut Turkeys.  Because if I can’t have my soup, I will have a donut, dammit. 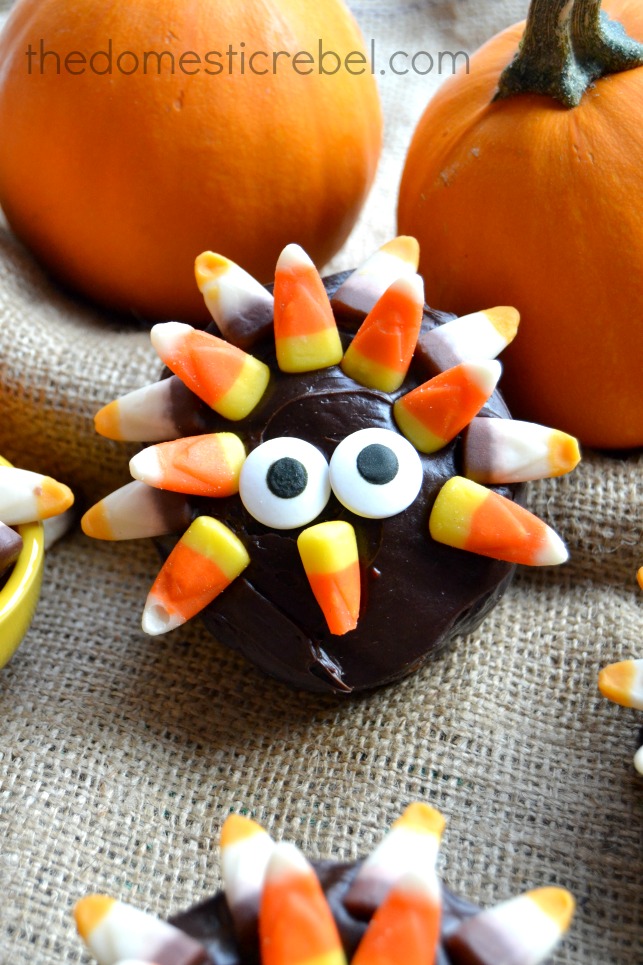 Funny story: Dorothy made these Brownie Candy Turkeys last week which happen to look nearly identical to my donut turkeys.  I texted her immediately after her post went live to inform her I had made something eerily similar and that I hoped that my posting my version wouldn’t ruin our friendship.  If I had to lose soup and my bloggy best friend in the same week, I don’t even know if I’d get out of bed ever again.  But thankfully, us bloggers know what it’s like to have the same ideas at the same time, so I was able to leave my bedroom and live life.  Thanks for being such a genius, Dorothy! 🙂 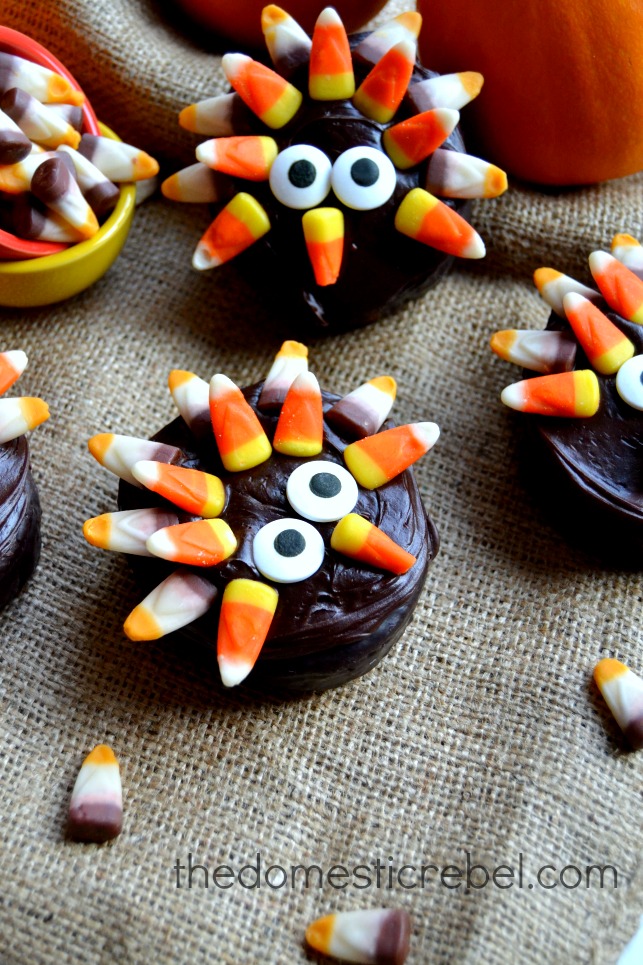 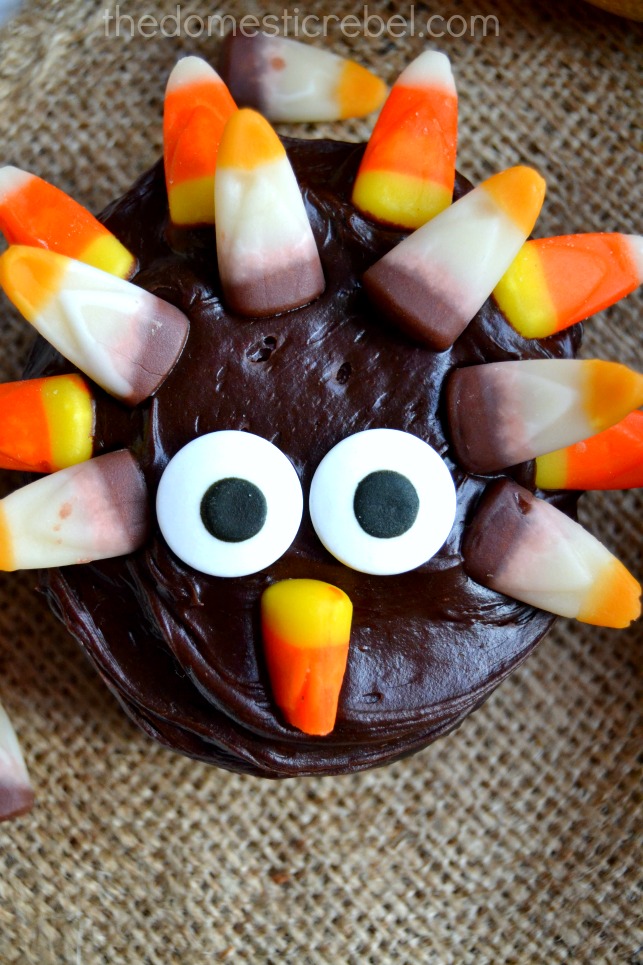 These chocolate donut turkeys take minutes to make and create such a unique and fun breakfast or dessert for the fall holiday!  Consider setting up a candy buffet and have the kids decorate their own turkeys on Thanksgiving morning.  Or make Santas or Snowmen during Christmastime using white canned frosting and original glazed donuts.  The possibilities are endless!