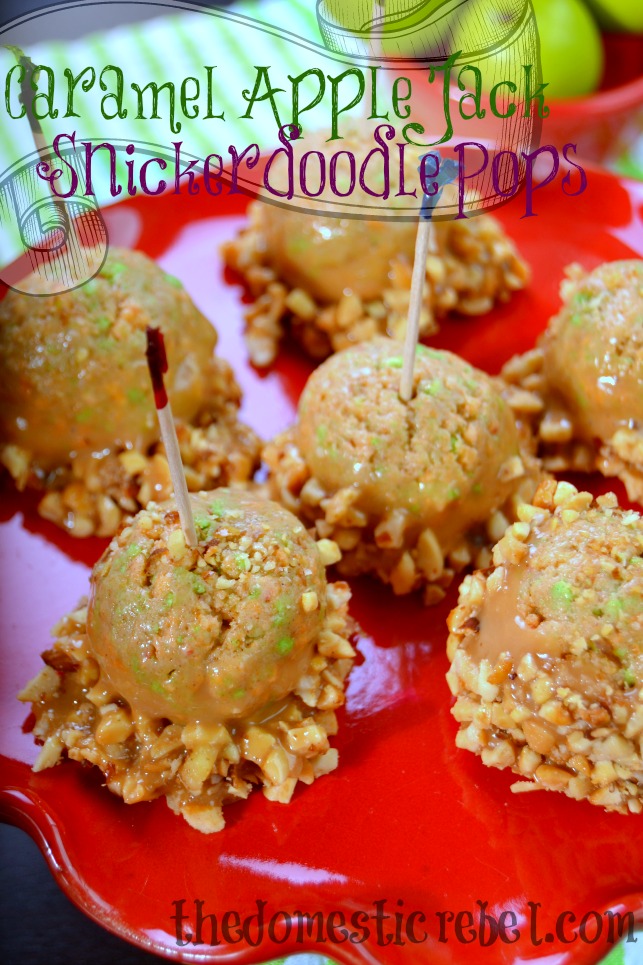 You guys wanna hear about the time I got a free iPod?!

So I was dating this guy I met through a friend’s friend’s friend.  We met up for the first time at a movie theatre and he was wearing a butt-flap.  A butt-flap.  If you’re blissfully unaware of what a butt-flap is, it’s a piece of fabric that unnecessarily hangs from the back of one’s pants, quite literally being a butt-flap.  And it’s the most asinine and ridiculous thing one could ever wear besides sandals and socks.  And he was wearing one, and in my moment of being a stupid teenager, I didn’t see anything wrong with this.  Later, there would be many other things I didn’t see wrong which were very, very wrong, like taking 2347627823 pictures of myself to post on MySpace, or wearing turquoise eyeshadow up to my brow bones and thinking it was attractive.

Anyway, I was totally smitten with the fact that he spiked his hair just-so, that he wore that friggin’ stupid butt-flap, and that he read great works of English literature and claimed to be a feminist.  We would frequently have conversations in which he would wax poetic about how he thought squatters were cool and how he thought meat-eaters were terrible people.  He was unlike anyone I’d ever dated before because I probably was avoiding people like him for a reason.  Also, he was a Cancer, which is a terrrrrible mistake for an Aquarian to make.  (If you’re an Aquarius and like a Cancer dude: stop, drop, and run.  Don’t answer his texts.  He’ll probably start wearing a butt-flap soon.)

For a YEAR I listened to his intense arguments about why most men were chauvinistic pigs and why he thought leather was evil, even though he wore shoes with leather soles.  We would hang out at his house–a sprawling, dilapidated 1920’s style mansion (really) in his room where he had posters of Japanese artwork on the walls.  And for about 30% of the year we were together, I was happy.  The rest of the time, true to teenagers-in-love fashion, we fought terribly over absolutely NOTHING, as most teenagers do.

Fast forward to the day of our one year anniversary.  Things were going prettttty awkward.  So awkward, I’m assuming, which is why I cannot remember any of it except little snippets that I am going to tell you about now.

We got to the apathetic-gift-exchange part of the anniversary.  I don’t remember what I got him so therefore, it was probably crappy, and he handed over a large box which contained the first and original iPod: a clunky, snow-white brick with a eardrum-splitting clicks when you thumbed the wheel and a dim black and pale green screen.

Of course I was floored.  An iPod?  He didn’t even have a job (hello, he believed in squatting–do you really see him being conventionally employed!?) and yet he had purchased this iPod for me, in spite of all of our bickering.  It made me look twice at him, like maybe I could forget about the fact that he had an aversion to deodorant or that he wore jeans from the womens department.

Juuuuust about when I was getting ready to accept this, a few hours later he broke up with me, in a parking lot, in front of my mom’s minivan, while wearing a butt-flap.  “It’s just not working out, and I just can’t do this anymore,” he explained vaguely.  He insisted I keep the iPod and, now the proud owner of a 450-pound iPod, I happily obliged.

And that’s how I simultaneously ended an exactly 365-day relationship AND got a free iPod.  Now who is hungry?!

With caramel apple season around the corner, I haaaaad to get a jump start.  Personally, I find caramel apples to be a seasonless favorite–I can enjoy them while it’s melting hot outside or when it’s blustery, but I prefer them when the weather changes, the leaves transform into beautiful shades of ruby, and when apples are in their peak season. 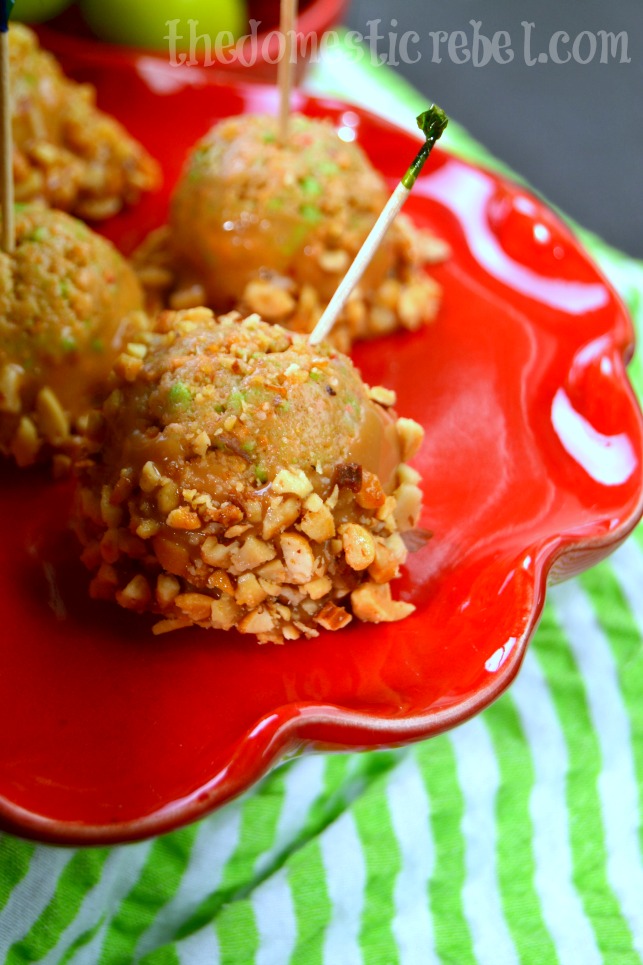 These apple pops are a spin-off of two ideas that knocked my socks off — a recipe for Apple Jack Cookies in Jessica Segarra‘s new book, Cereal Sweets & Treats, and a recipe from an older Taste of Home magazine that called for dipping baked cookies in caramel, rolling them in nuts and sticking them on a toothpick.  Not one to skimp on that extra oomph, I decided to blend both recipes to create a truly unique, seasonal treat that is reminiscent of my all-time fave! 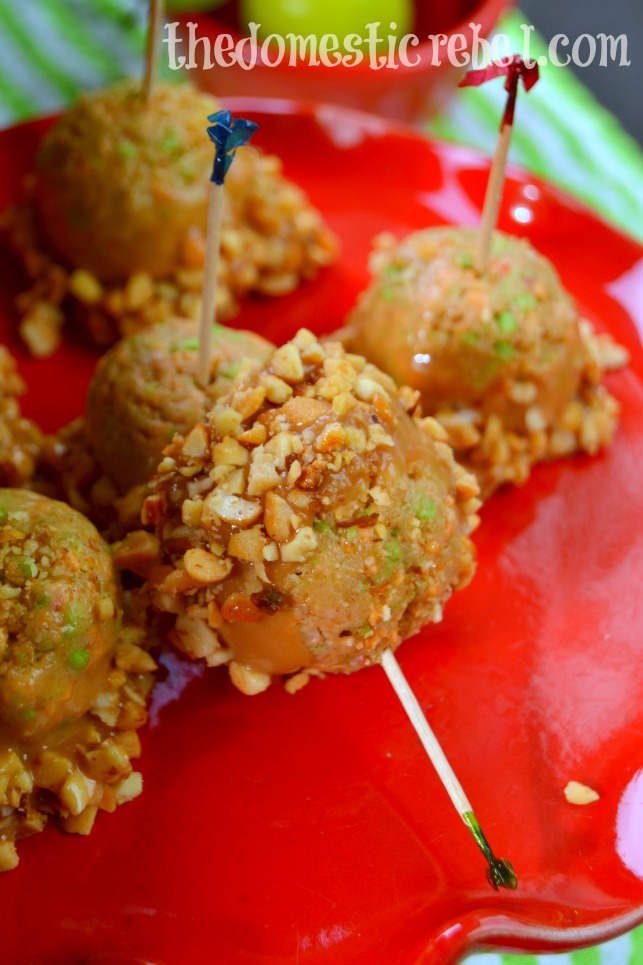 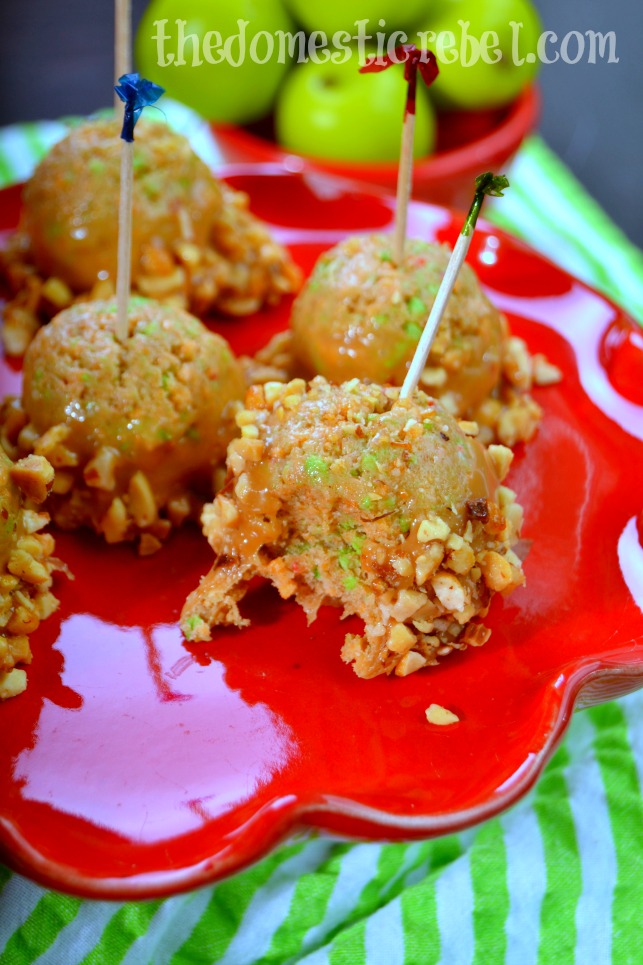 These pops aren’t only adorable, but they’re DELICIOUS, too.  I LOVE the addition of crushed Apple Jacks cereal into the snickerdoodle cookie base.  It’s such an unexpected twist and marries so beautifully with the spicy, warm cinnamon of the sugary cookie dough, while imparting a nice, crisp texture as well.  The apple flavor is subtle, so you can focus primarily on that buttery caramel, the salty peanuts, and the rich, complex cinnamon flavor of these scrumptious, highly addictive cookie pops.  I’m in love!

Be sure to check out Jessica’s book — I LOVE cereal and am finding I am obsesssssed with every recipe in here!