Or, if your name is Hayley and you grew up being babysat by Little Debbie and Hostess’ biggest fan, every-day snack food.

Yeah, it’s no big shocker here that I love me some snack cakes, hand pies and convenience-store fare. I grew up on the stuff, ate it constantly, and despite the shocking calorie stats, can’t typically resist all that sugar.

But can you believe I’ve only had a moon pie ONCE??

A long time ago, I dated this boy who was like, stupidly-obsessed with weird heavy metal music and I don’t think he owned any clothing that wasn’t emblazoned with the Spitfire logo.

Anyway, his family was from the South and one time, he traveled down there for a week (which, for a 14-year old girl was like, a friggin’ eternity). When he returned, he introduced me to Moon Pies.

Moon pies are basically graham cracker cookies snuggling a thick layer of marshmallow, then dunked in chocolate. They’re a delicious classic and I’ve liked ’em since I tried them. However, I wanted to recreate them my way with my crazy Hayley twist.

That means, taking a Golden Oreo (my fave), opening it up, and shmearing on peanut butter, marshmallow fluff and Nutella. Then I closed it up, froze it for a beat, and dunked the whole thing in chocolate.

No surprises here: it is ridiculously gooey, crunchy, sweet, and has lots of classic flavors going on that, when combined into a petite faux-moon pie, taste simply heavenly. Plus, it’s no-bake, so if you’re still struggling with (disgusting) 100 degree days and the thought of putting on a scarf sounds about as appealing as eating a scarf, this recipe is for you!

1. Line a baking sheet with foil and set aside. Gently twist the Oreos open and line them up on the sheet, side by side.
2. Smear about 1/4 tsp each of peanut butter, marshmallow fluff and Nutella on one side of each cookie sandwich. Repeat until all cookies have the three fillings.
3. Re-“sandwich” the Oreos and freeze for about 30 minutes or until firm. Meanwhile, prepare the almond bark according to package directions.
4. Using a fork, gently submerge the sandwiches in the melted chocolate to coat, allowing excess to drip off. Once all pies are coated, freeze again to harden the chocolate, about 20 minutes. Store leftovers airtight, at room temperature 2-3 days or in the freezer, about 1 week.
**Note: I’m not giving specific measurements here since this recipe is adaptable to how many you’re willing to make. It’s so easy to make a handful OR a huge batch, so adjust the recipe + almond bark measurements accordingly.**

My dad (who wasn’t a huge moon pie fan) really enjoyed these mini moon pies, and I found them particularly delicious crumbled on an ice cream sundae… just sayin’.

Have a fab Tuesday! 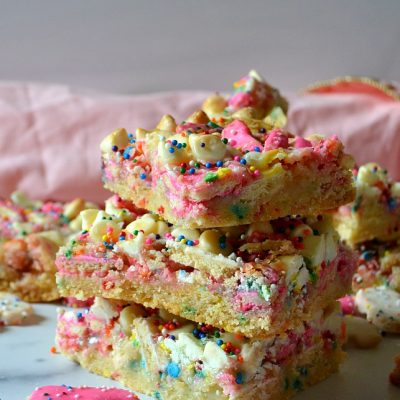