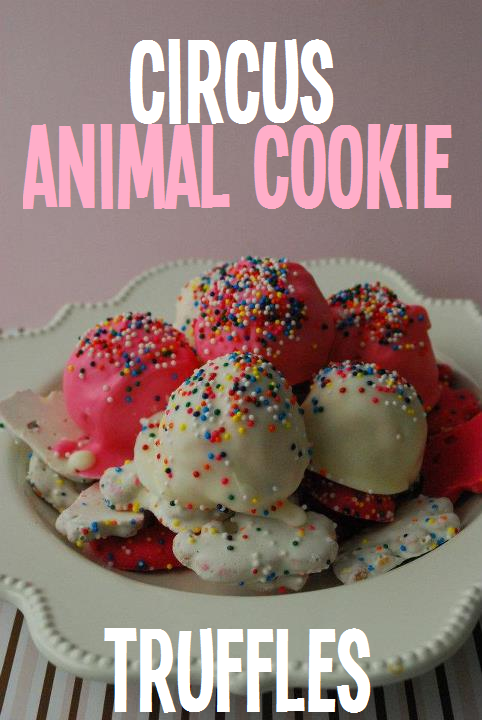 I like it. Lots of it. Especially when it deals with people I don’t know. ‘Strangers’, if you will.

See, I was not raised in a “love everyone, everyone’s your friend” household where I could openly trust anyone and everything was dandy and people held hands and sang happy songs and there was no wrong in the world.

I was raised by the most suspicious mother EVER and we couldn’t even ride our bikes in groups around the block without her worrying. We learned to have a discernible eye for suspicious people and behavior, mostly because our mom openly judged others and encouraged us to do the same.

Her motto was that it was better to hurt someone’s feelings than to be too comfortable and then be sorry you were. Sounds good to me.

Because of my upbringing, I generally trust no one. Don’t read into that as being impolite; I talk up a storm to strangers who probably would rather I kicked their child in the face than yap their ear off about whatever conversation I seem to think is entertaining at the moment.

I just don’t trust them.

And because of that, I’m always working out scenarios in my head of being wronged by a stranger somewhere and having to fight for my life because of their criminal-stranger shenanigans.

Like, take for instance, a few days ago I went to the local grocery store to find cotton candy. News flash: there seems to be an apparent shortage of the fluffy stuff EVERYWHERE because I can’t find it anywhere. Seriously, who the hell started liking cotton candy all of a sudden that NO store carries it?! But I digress.

While on my hunt for spun sugar in a bag, I stumbled down a random aisle just to browse the contents when I noticed this short man with hunting gear on admiring the Goldfish crackers. Harmless enough, I suppose. I quickly grew bored of staring at Triscuit boxes and moved along to the next aisle, saying it had “New Age Drinks” down it which caused me to ponder what the eff a “new age” drink was.

As I searched for answers into the modern world of drinks, I suddenly spotted The Most Dangerous Game was on my aisle… again. He looked at me a bit too longer than someone wearing full on human-hunting gear should, so I smiled meekly and continued walking, no longer caring about futuristic drinks or whatever.

Not so fast: Human Hunter was back and out for blood–my blood. Why a man wearing hunting garb would need to search for a greeting card, I do not know, but I bolted the eff out of there, abandoning those tacky cards in my wake, and decided to leave the store. Obviously, I didn’t find cotton candy; instead, I only found myself running for my life in a grocery store from a man who was probably going to skin me alive and use my flesh to make a couch or something.

As I was leaving, who do you think also decided to leave at the same time? Creepy Camo Man. At that point, I began running in a zig-zag pattern as to confuse him about which direction I was truly headed, and started screaming “Don’t hunt me! You don’t want my blood! It tastes bad; mosquitoes don’t even like it!”*
*this statement is grossly false because I am like the dining hall for most blood-sucking insects, but I didn’t want Hunting Dude to know so I made up a lie to spare my life.

Later, after narrowly escaping my impending death, I drove to Dollar Tree hoping my fave store would stockpile cotton candy, but was disappointed to find they ran out. As I wondered what kick-started this new cotton candy rage, somehow, a bag of walnuts, a miniature hand fan and some funnel cake mix ended up in my basket and I was forced to check out.

While waiting for my turn at the register and wondering why the woman in front of me had shoved her teeny feet into even teenier shoes, thus resulting in her baby toe dangling mercilessly out of the edge of her wedge shoe, and pondering whether or not that hurt because clearly, her baby toe was millimeters from being detached, a woman walked up behind me and proceeded to stand THISCLOSE to my purse.

I shifted obviously, hoping she’d understand that she was practically climbing into my bag, and kind of shot her a glance, but she stood there, unaccepting of my desperate passive-aggressive glance and shifty movements, and instead, inched closer because she felt it was necessary.

And I was like, “helllooooo, you’re a woman. Women are touchy about their bags… obviously since things like CASH and LIPGLOSS are in there. Now why don’t you back the hell off my bag because I don’t trust you and I will cut you if you come near me again, lady.”

I didn’t actually say that, but I thought it. And the whole time kept hoping she wouldn’t try to reach in and snatch my favorite cocoa butter lotion or something because then I’d have to cut her and would probably be banned from that dollar store…. and we all know that’d be tragic.

So basically, I like my space. And I don’t like being followed by men in hunting gear. Crazzyyyyy, right?

After my crazy day of nearly dying, I wanted to make some truffles to make me feel better. Consider them my medicine against crazy people or something. And since they’re made with Circus Animal Cookies, that makes them even more magical. Cookies are the coolest. 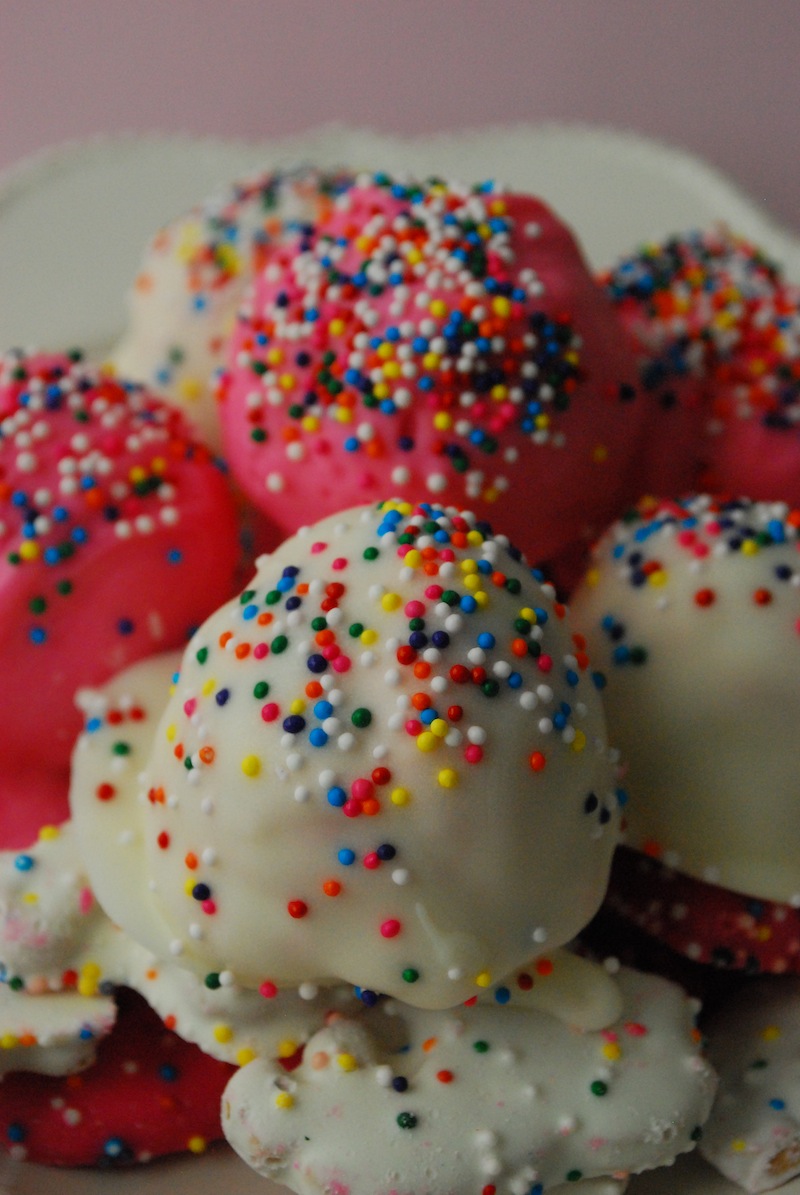 1. Line a rimmed baking sheet with foil and set aside. Meanwhile, in a food processor, grind the cookies (about a cup at a time–work in batches) until finely ground, coarse crumbs. Pour all the ground cookies into a large bowl.
2. Once cookies are ground, spoon in the half can of cream cheese icing. Using your clean hands or a spoon, mix together the crumbs and frosting until thoroughly combined.
3. Begin portioning the crumb mixture into inch-sized balls (I used a small cookie dough scoop) and place the balls onto the foil-lined baking sheet. Repeat until all the mixture is used up.
4. Freeze the truffles for about 3 hours or until completely frozen and solid. While they’re freezing, prepare your white chocolate according to package directions until smooth and melted. Pour half that mixture into a separate bowl, and using your pink coloring, tint one of the bowls a pretty pink shade.
5. Dip half the batch of truffles into the white chocolate, and the other half into the pink chocolate. I used a fork to coat all sides of the truffles, then allowed the excess to drip off the bottom before gently placing each dipped truffle back onto the foil-lined sheet. While still wet, sprinkle the truffle tops with the rainbow nonpareils.
6. Allow all the truffles to harden and set, about 20 minutes in the fridge. Store leftover truffles airtight for about 2-3 days at room temperature, or a week in the freezer–just allow them to come to room temperature before eating them that way. 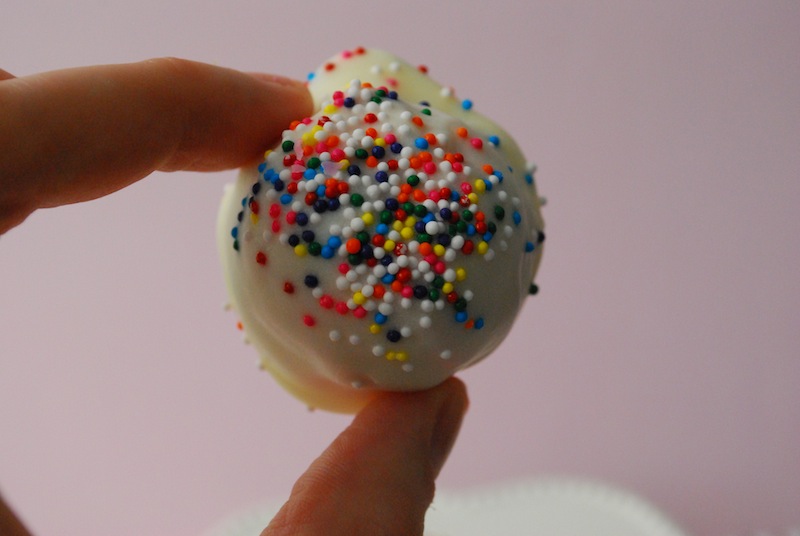 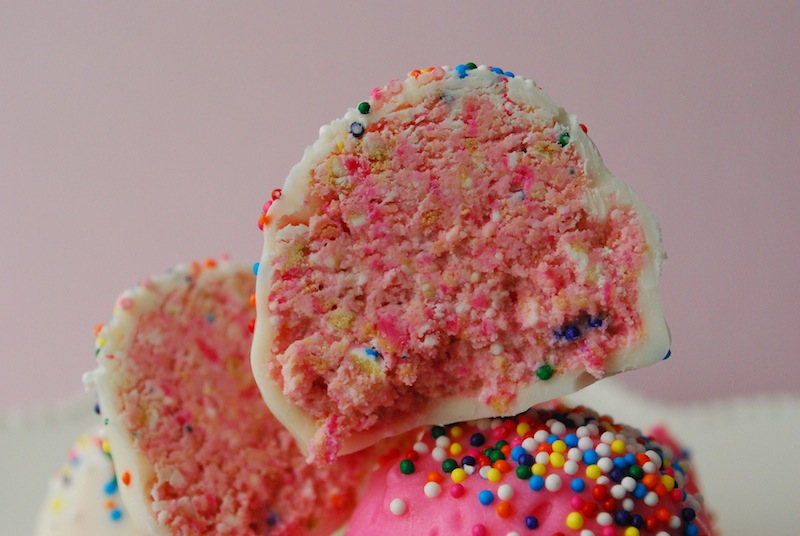 At first, I didn’t know how the truffle would come about since animal cookies are coated in fudge… but they were great! They have a good texture, a little crunch from the sprinkles, and who can resist a bowl of pink and white cuties like these? Love!