That means (most of the time) I know how to talk and spell. Sorta. Maybe not after a few Electric Hurricanes. Certainly not after midnight, talking in my half-sleep about “scared spaghetti” (ask Jessie). But let’s pretend.

So a few days ago at school, I witnessed a young couple in the midst of a qualm. She, the UGG-boot-wearing, Coach-purse carrying girl was clearly peeved at he, the Vans-sweatshirt-wearing, presumable-jock. I’m not really sure what they were fighting about since I was in the middle of trekking to lunch and no one and nothing gets in the way of me and my food–not even two song-birds in love–but I’m assuming the magnitude of their fight was large and serious since she looked pissed off and he looked apologetic.

Hitting on her perky best friend?

Using incorrect spelling and/or grammar through a text?
*Just because we’re texting does not give you the right to abbreviate unnecessary words like “u” and “rite.” Also, it’s not my favorite, but you can only use the word “prolly” as a substitute for “probably” ONLY IF you’re actually aware that it’s spelled “probably.” Not “prolly” and certainly not “probly.” thanks.

Anyway, while I was in the presence of their tense air, I happened to hear the girl say, “whatever, I could care less.”

Whenever I hear this, I nearly flip my you-know-what. It takes every teeny tiny fiber in my being not to interject myself into their conversation and scream, “YOU MEAN YOU COULDN’T CARE LESS. COULDN’T!!! Right now you’re saying that, in fact, you COULD. CARE. LESS than you do NOW!”

I mean, it’s a common mistake and all, but the English language has kinda sorta been around for oh, HUNDREDS OF YEARS so no one really has an excuse to speak like that anymore.

Unless you couldn’t care less, of course.

But if you could care less… then you should probably start caring about how dumb you sound. Just sayin’.

Some other moronic things people say that hurt the English language and fellow grammar nazis such as myself:

1. Saying “ATM Machine” and/or “PIN Number.” Yeah, I know. I didn’t realize that the ‘M’ stood for ‘machine’ and the ‘N’ for ‘number’, either. But they were lookin’ out for us when they created those acronyms. Therefore, saying ‘machine’ twice is kinda redundant. So… don’t say it twice.

3. Using the wrong root of a word, such as “orientate” for “orient”, “conversate” for “converse”, or “interpretate” for “interpret.” Uh… if you say any of those things, you’re saying something wrong. Also, I know it’s technically correct, but I really hate when people use the word ‘utilize’ for ‘use.’ Yeah, it’s the same thing, but it’s like, why pay $5 for a word that does the job but does so awkwardly when you could use a penny word that actually sounds smarter?

I’m not going to keep going on and on about grammar because you’re probably like, “wow, this girl is totally mean. She just publicly ratted me out for saying ‘PIN Number’ and I didn’t even know the difference!! Ugh, I could really care less about this beeyotch and her freaky grammar tangents. Where is this German Chocolate Cake Fudge this girl promised? She is so full of herself. I hate her and her stupid sparkly blog. I’m going to go fail English class now since that’s like, my right as an American citizen.”

….k, maybe not like that. Hopefully not like that. I’ll kind of be sad if you really feel like that, but ehh, then again, I’m the one who can spell soooo.. here’s your fudge. Love me.

1. Line an 8×8 inch pan with foil, extending the sides of the foil over the edge of the pan. Set aside.
2.  Microwave the chocolate chips in a microwaveable bowl for about a minute, stirring well. Add a small splash of oil, then zap for another 30 seconds-1 minute, stirring after 30 sec. until the chocolate chips are smooth and melted. Stir in the can of coconut pecan frosting until blended.
3. Spread the mixture into your foil-lined pan and smooth into an even layer. Top with the toasted coconut and pecans evenly. Allow to harden, for about 3-4 hours in the fridge. This fudge takes a little bit longer to set up than other fudge I’ve made, probably because the coconut pecan frosting is a bit runnier than other frosting. Cut into bars and serve.
**Note: to toast coconut and pecans, line a baking sheet with foil and spread the shredded coconut and nuts in an even layer. Toast in a 300 degree F oven for about 10 minutes, turning the coconut and nuts every 3-4 mins or so, until fragrant and toasted. Careful, though, because nuts and coconut burn quickly. If you can smell it, it’s done. 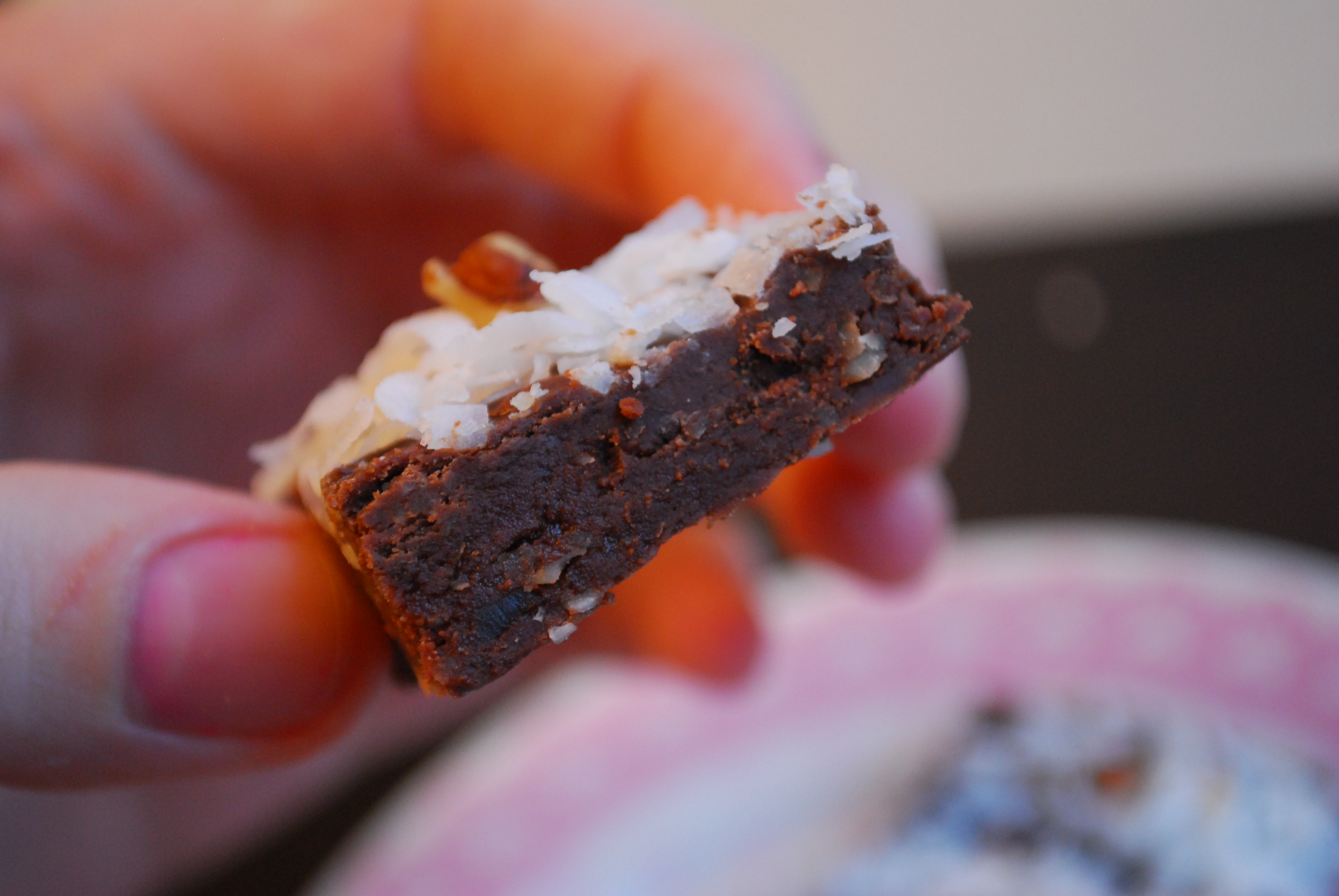 Why I’m on such a fudge kick, I do not know. But I love fudge kicks. (Why did that sound gross?) Whatever, I couldn’t care less.

If you like fudge kicks too, try these other awesome fudge recipes:

Have a wonderful weekend!!