As I’ve briefly mentioned before, I have a serious irrational fear of smelling bad.

Due to this odd fear and a minor humiliation for such things, I haven’t mentioned this to the general public; instead preferring to keep it hush-hush among myself, my family, and my boyfriend. They’ve all been aware of my smelling problems, dating back to when I was just a wee little girl.

Long ago, when I seemed to survive on Happy Meals alone, I would be soexcited to get my Happy Meal toy with purchase. But before I had the chance to play with it or experience some spontaneous, rousing toy-playing, I had to smell it.

Like sweaty french fries. Or weird cheese that had been rubbed on someone’s feet.

So I had my parents throw Happy Meal Barbie in the dishwasher. Clean toy+no cheesy feet smell=problem solved. Commence playing.

As I got older, I began to hone in on my smelling know-how and became keen on easily identifying what certain things smelled like… even if it didn’t make sense to anyone else but myself. Like the one time my family and I went to a furniture store and I proclaimed it smelled like eggs, Elmer’s glue and mayonnaise (swear by it). Or the time I smelled my best friend’s ear drops and suggested they smell like the word ‘mute‘. Crazy? No denying that. But after we spent 10 straight minutes laughing and crying, she said “you’re right.”

And as I got even older, I developed serious issues with how I smell.

Not that I smell bad. In fact, it’s quite the opposite. I always smell good. Mainly because I have that irrational fear of smelling bad.

You know those people who are completely oblivious to their own stench? Yeah, I’m not one of them.

After catching an impolite whiff of someone in my sophomore PE class smelling like nacho cheese and chicken noodle soup, I decided I would be my own smelly advocate, ensuring I always smelled delicious, 24/7, no questions asked.

This has become quite a laborious task, as every couple hours I check myself in the bathroom for certain smells I would not like to be identified with. And I spritz myself with body spray as necessary. (Yes, of course I carry body spray on my person at ALL TIMES. How nice of you to ask).

A few days ago, my American Lit classroom smelled undeniably like spaghetti and ass. Since I was wearing a chiffon dress (and everyone knows chiffon absorbs smells… maybe… I don’t know) I became absurdly paranoid about smelling like spaghetti and ass. I mean, smelling like spaghetti alone would be awful. But then it smelled like butt. The two combined were disgusting, and there I was, sitting in the middle of class, smelling myself as discreetly as possible, as I did not want ANYONE to associate that smell with ME.

So I sprayed myself. Secretly, of course. And surrounded my person with delicious smells like flowers and unicorns and happy things completely irrelevant to spaghetti and ass.

And I lived happily ever after, spritzing myself throughout the day, relishing in my own smell-goodyness.

Speaking of smelling good, today I went shopping at the Dollar Tree with my sister and mom, and I came across some candy corn scented candles. And candles that smelled like chocolate. I mean, wtf, how cool, right?!

So right then and there, among yummy treat candles and bags of candy (all for a dolla, holla!) I was inspired to make some candy bark because that’s what people who are inspired in Dollar stores do.

I’d originally come across a picture for some candy-bar bark on Pinterest, my new obsession, and by visuals-only, decided to create it. The picture had lots of chocolate and peanut buttery goodness, and who wouldn’t want that?! So I made it. And it’s delicious. And because I was thinking not only in terms of flavor, but in terms of smells as well, it smells awesome, too. Bonus, obviously. 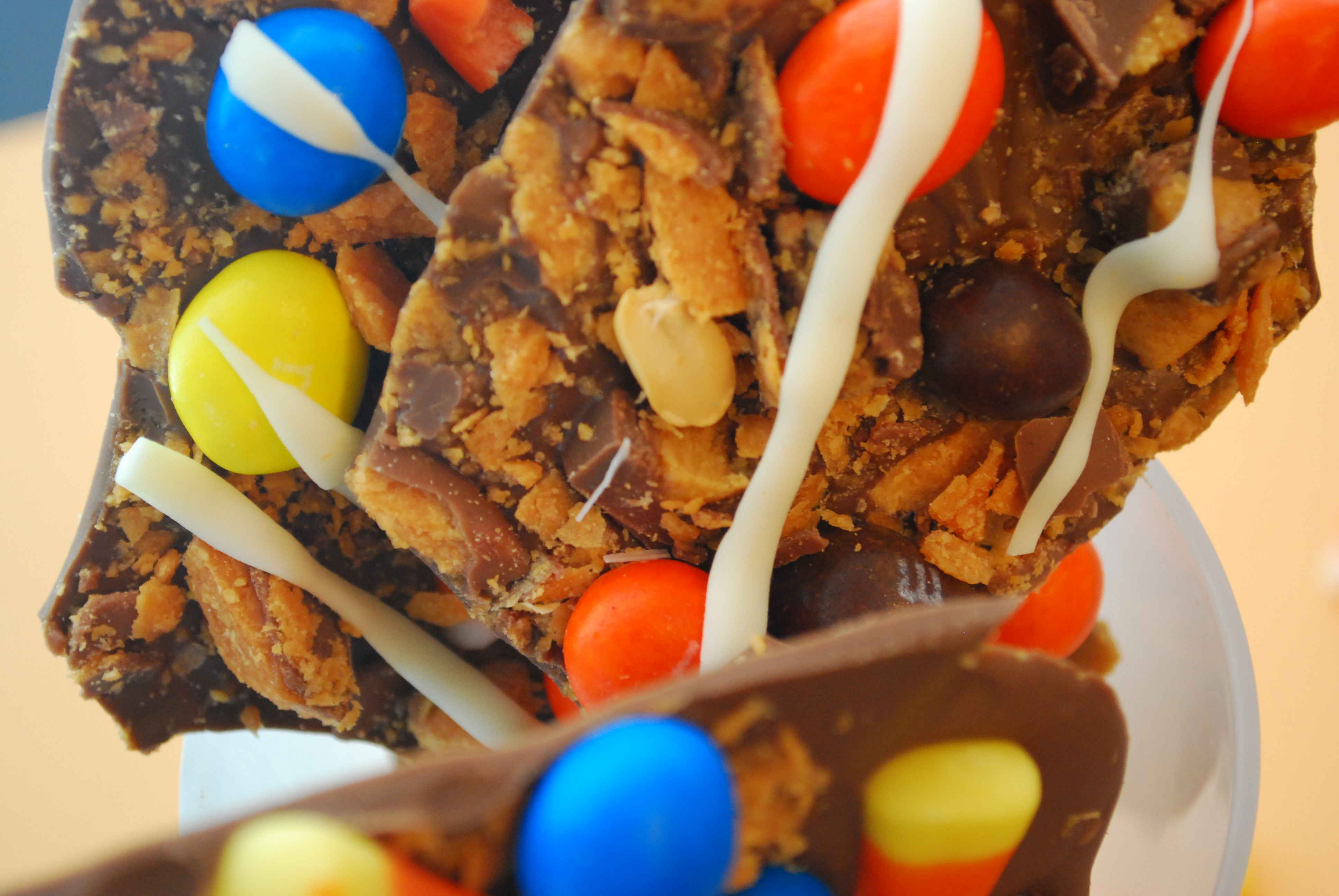 Trick or Treat Candy Bark *inspired by a picture on Pinterest

1. Cover a baking sheet with foil; set aside.
2. In a large bowl, prepare your milk chocolate candy melts according to package directions, until nice and melty. Spread onto your foil-lined baking sheet in a thin, even layer, spreading to your desired thickness (I went thinner since it’s piled with candy).
3. Immediately sprinkle melted chocolate layer with your chopped Reese’s, chopped Butterfingers, M&M’s, and candy corns, gently pressing some of the larger pieces into the bark to better adhere. Place the baking sheet into the fridge to chill and harden, for about 15 minutes.
4. Once bark is hardened, prepare your white chocolate candy melts according to package directions in a small bowl. Spoon melted white candy into a sandwich-sized baggy, seal tightly, and snip off the corner of one side of the baggy. Remove bark from fridge and drizzle bark with melted white chocolate. Place bark back into the fridge to harden white chocolate, about 10-15 minutes. Remove bark from fridge and carefully break into pieces. Store airtight.

The smell of chocolate, peanut butter and candy is quintessential to Halloween, methinks, and this bark is no exception. Delish!

Plus, it’d be so cute tied up in cellophane bags and handed out to teachers, coworkers, friends, or as favors at a Halloween party since it’s such a cinch to make.

Oh, and if you don’t already have a Pinterest, I HIGHLY recommend you get your booty on board. Stuff’s addicting, but so inspirational and fun! Add me!

And! for those of you who have seen my video (and I’ve received some awesome feedback–thank you!!) there will be ANOTHER video posted this week!! I had so much fun making it, have had so many great compliments, and have so many ideas for another! Keep your eyes peeled 🙂