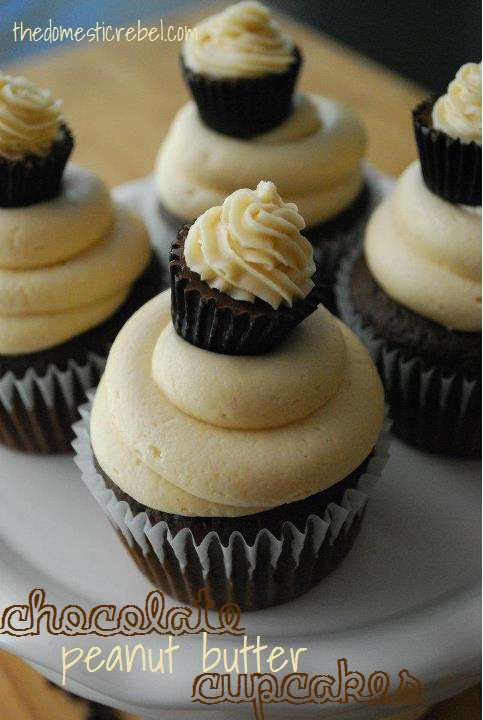 Yesterday, I realized something kind of sad.

First of all, have you been to DSW? It’s called a ‘warehouse’ for a reason–there are so many shoes there that my head kind of exploded. Not because I enjoy shoes but because I actually loathe shopping for them. Sorry to disappoint you.

Now if it were a store completely dedicated to handbags, studded jewelry and/or Betsey Johnson anything, I’d be in love and you couldn’t drag me out of there if it were burning to the ground.

Anywho, I was already wearing workout gear IN PUBLIC because my mom neglected to inform me we’d be doing any public shopping. Feeling hideously self-conscious in my Toms/workout shorts/plain top with zero fashion sense whatsoever and looking like a forgettable frump on my day off (otherwise known as a fashion CRIME) I waded through the aisles of shoes, all looking the same after awhile and wondering why the hell I decided to wear this outfit since I clearly looked like a poor blind girl who lived under a hideous rock her whole life. Toms with workout shoes? I understand if you don’t want to be friends anymore.

And then I saw them: the coolest couple ever. First of all, I decided to check out clearance shoes in my size (9, if y’all were curious) and I spotted a man and immediately thought “he must be lost” because a man in a shoe store that probably has over 300 pairs of flats alone is obviously a man who is lost.

And then as I watched him closely, I figured maybe he had a women’s shoe fetish and can only get away with a weird fetish by shopping clearance. Hey, to each their own. I don’t blame him for wanting to indulge his fetish on the cheap; it can get kinda pricey sometimes.

But then I realized he was shopping for his wife. Or girlfriend. Or whatever the skinny woman wearing lucite heels and atrocious lipstick was at the end of the aisle, teetering nervously in a tube top mini dress.

And (not surprisingly) all the shoes possible-shoe-fetish-man was carrying were…of a certain type. The type that, say, exotic dancers enjoy wearing. The type that, say, a modest 9-to-5 working woman wouldn’t wear. The type that make my feel shriek in pain when I see women wearing them because they’re basically Steve Madden brand stiletto torture chambers. Those girls probably spend a lot on shoes but even more on podiatrist visits.

I watched tube top lady try on pair after pair of garishly sky-high platforms, modeling down the empty aisles for her shoe-fetish man who squealed with delight.

It was then that I realized Jessie and I weren’t cool. I mean, I had asked Jessie when my birthday was one day last week and he didn’t even remember the date. I can’t even imagine him picking out shoes for me, much less beg me to try on platforms in a store while he so (albeit confidently) obviously was telling everyone “I have a shoe fetish!” (and my girlfriend’s a stripper!)

So that’s the end of that story. It was a sad one, to say the least. One that involved moping around the store in my ugly outfit (I have a problem with wearing workout gear in public, okay? I don’t have a closet full of beautiful clothes to wear yoga shorts to the mall, mmkay?), not getting shoes and also being unwittingly insulted by a man with a foot fetish. *sigh* at least I had cupcakes.

Chocolate Peanut Butter Cupcakes. Can you believe I didn’t have a recipe like this on my blog already? I obviously have whack priorities which makes me an awful blogger and friend to you since y’all love chocolate + peanut butter so dang much. So I made you some that are unapologetically salty yet sweet and have a surprise Reese’s cup in the middle. They also have these cutie mini “cupcakes” on top–made with Reese’s cups and icing–which make for an extra-cute (and decadent!) presentation. 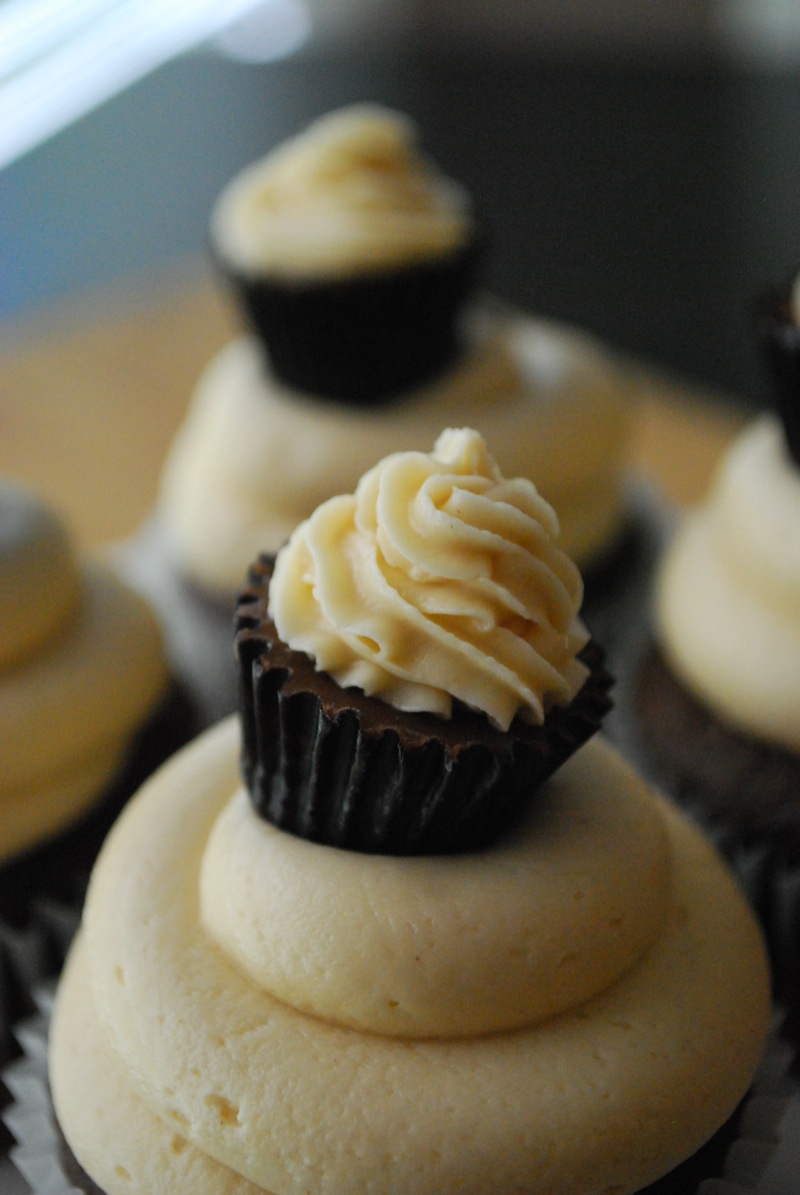 Pretty please make them and be uncool with me? 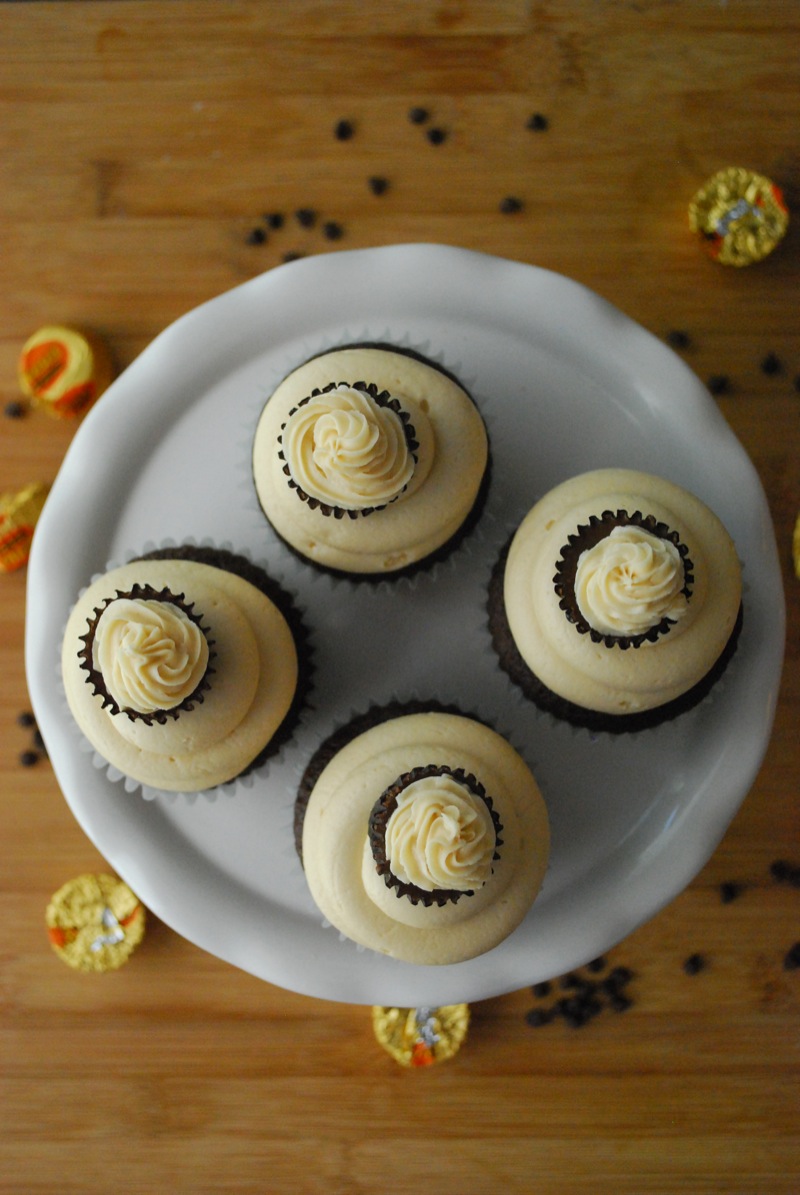 1. Preheat oven to 350 degrees F. Line 2 muffin tins with about 18 paper liners. Set aside.
2. In a large bowl, prepare the cake mix according to package directions. Stir the chocolate pudding mix into the cake batter to combine. Portion the batter evenly among muffin tins, filling about 3/4 of the wall full. Bake for 5 minutes.
3. While baking, unwrap 18 of the Reese’s cups completely. Remove par-baked cupcakes from oven and gently stick a PB cup into the center of the gooey cupcake. Return the cupcakes to the oven and bake for an additional 10-12 minutes or until a toothpick inserted near the center comes out clean. Cool completely. 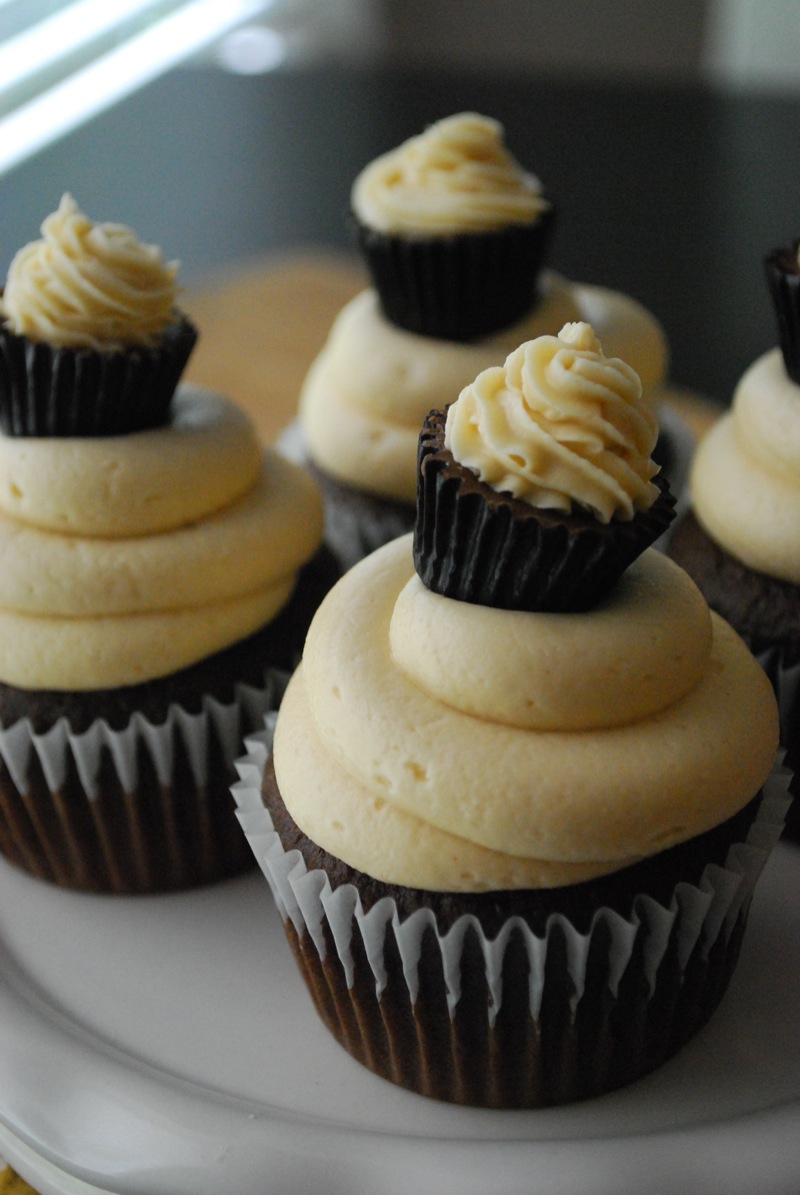 1. In the bowl of a stand mixer, beat together the butter, peanut butter & vanilla on medium speed for 2 minutes or until creamy. Gradually add powdered sugar, about a cup at a time, until frosting is light and fluffy. Use a teaspoon or so of milk to thin it out if frosting gets too thick.
2. Unwrap remaining PB cups, but leave on the small brown wrappers.
3. Reserve 1/2 cup frosting. Pipe the rest of the frosting onto cooled cupcakes (I used Atecco tip 807 or the large round open tip). With the remaining 1/2 cup, fit a second pastry bag with a Wilton tip #16 (small open star tip) and pipe them onto the reserved PB cups. These are your mini cupcake toppers.
4. Adorn each frosted cupcake with a frosted “mini cupcake.” Store leftovers in the fridge, airtight, for one day. Best served the same day.

So this frosting… it’s pretty freakin’ awesome. So easy, but so delicious.